National Poetry Day is a chance for everyone everywhere to read, share and enjoy poetry. Our Little Histories are also all about learning and sharing, so this National Poetry Day we’ve created a brand new learning resource based around our newest Little History book, A Little History of Poetry by John Carey.   In four parts we will be sharing bite-sized biographies of poets along with links to their poems online and links to free resources to discover more.

Alfred, Lord Tennyson (1809–1892), was the son of a Lincolnshire vicar. He went to Trinity College, Cambridge. His early poems were ridiculed for what was seen as their femininity, but in 1850 he succeeded Wordsworth as Poet Laureate. ‘The Charge of the Light Brigade’, probably his best-known poem, honours the courage of a cavalry unit that, because of a mistaken order, charged the Russian guns during the Battle of Balaclava.

He can still be heard intoning it, indistinctly, in a wax-cylinder recording. He was subject to depression, and also bore a grudge because his father had been disinherited, the estate going to the Tennyson d’Eyncourt branch of the family. This was all the more hurtful as he believed himself of royal descent, and used to visit Westminster Abbey to identify his likeness in the Plantagenet tombs. In 1884 he accepted a peerage – the first (and, so far, only) poet to be ennobled for writing poetry. His poetry is noted for its melodiousness, but his brilliance goes far beyond that. He is a master of perspective and precision, both evident in ‘The Eagle’.

More than any other English poet, Tennyson was inspired by the Odyssey. ‘The Lotos-eaters’ is a marvel of dreamy forgetfulness.

Tennyson imagines, too, the sufferings of women, in a society that condemned them to watching and waiting, and men stole all the action. ‘The Lady of Shallot’, ‘half sick of shadows’, breaks out of her restricted life, and dies. ‘Mariana’ waits for a lover who never comes, while her surroundings fall into ruin

In 1833 a college friend of Tennyson’s, Henry Hallam, died of a stroke aged twenty-two, and Tennyson mourned him in a long poem, ‘In Memoriam’, often thought his masterpiece.

It was not just Hallam that ‘In Memoriam’ mourned. In the early nineteenth century geologists revealed that the earth was millions of years older than the Bible suggested, that the land-masses were constantly changing, and that not only the human race, but every trace of its existence, would one day be obliterated.

In his last great poem, ‘Maud’ (1855), his fury over the d’Eyncourt disinheritance and his bitter memory of a banker’s daughter, Rosa Baring, who had once rejected him, erupt in a murderous tirade against the upstarts who were making their fortunes in Victorian commerce and industry. Its intensity is almost maniacal.

Learn more about Alfred, Lord Tennyson and his poems

Giuseppe Ungaretti (1888–1970) developed Hermeticism as a personal take on poetry and was the winner of the inaugural Neustadt International Prize for Literature in 1970.  Along with Salvatore Quasimodo and Eugenio Montale, he is regarded as one of the foremost Italian poets of the 20th century.

Learn more about Giuseppe Ungaretti and his poems

François Villon (c. 1430–c. 1462) was born in Paris to unknown parents, he adopted the name Villon from his foster-father, a law professor. He took his BA in 1449 and his MA in 1452. In 1455 he fatally stabbed a priest in a street brawl, but petitioned the king and was pardoned. Later the same year he was with a gang who burgled the Collège de Navarre. After that he fled Paris and temporarily vanishes from the record, though he claims that in 1461 the Bishop of Orleans locked him in a dungeon and tortured him. Back in Paris in 1462 he was in a scuffle that left a Papal notary dead, and was sentenced to hang. On appeal this was commuted to banishment, but no more is known of him.

He wrote twenty shorter poems and two mock last-will-and-testaments, totalling 2,300 lines, in which he leaves a miscellany of junk, plus various items not his to bequeath, to a broad swathe of beneficiaries, some with names twisted into obscene puns. His tone is by turns scathing, sardonic, pious, vituperative, comic, arrogant and trenchantly self-critical – but it is always unmistakable, and he treats subjects other poets had ignored – sex, crime, money troubles, drinking, poverty, pain, hunger. His cast of characters runs from hawkers, criminals, fishwives, lamplighters and down-and-outs who sleep under market stalls, chilled and filthy, to bankers and lawyers. His speakers include a hanged corpse, complaining that crows have stolen his eyebrows and beard for their nests, and an old woman lamenting what time has done to the ‘little garden’ (jardinet) between her legs.

Among moderns, Villon was admired by Arthur Rimbaud, Paul Verlaine, Bertolt Brecht and Ezra Pound, who recommended him as a model. His persistent theme is time’s transience, expressed in his most famous line, ‘mais où sont les neiges d’antan?’ which Dante Gabriel Rossetti (1828–1882) rendered as, ‘But where are the snows of yesteryear?

Learn more about François Villon and his poems

Walt Whitman (1819–1892) grew up in Brooklyn. His family was poor and he was largely self-educated, leaving school at eleven. He was gay, or possibly bisexual, forming intense relationships with men and boys throughout his life, but also claiming he had six illegitimate children. He worked as a typesetter and printer, then a newspaper editor. In the American Civil War he served as a volunteer nurse in an army hospital. He published his poetry collection, Leaves of Grass, in 1855, at his own expense. In the preface he describes himself as ‘one of the roughs, a kosmos, disorderly, fleshly and sensual’.

The book scandalised some. One critic dismissed it as ‘trashy, profane and obscene’, and its author as a ‘pretentious ass’. But it is now recognised as a foundational text of American literature. Its longest poem, ‘Song of Myself’, is an epic of the new America, written in long, dynamic lines of free verse that liberate it from traditional stanzas and metrical rules. It is voiced by a giant consciousness that spans the whole continent and all the spaces beyond, and tells its readers that they are part of him.

He also weaves into his song, as part of himself, a vast swathe of American life – trappers and Native Americans in the far west, the runaway slave that he succours, ‘men that live among cattle and taste of the ocean and woods’, a prostitute, new immigrants crowding the wharves. ‘Of every hue and caste am I, of every rank and religion.’ If this sounds impossible, he does not care.

He is at one with the sea, ‘scooper of storms’, and the winds rub their ‘soft-tickling genitals’ against him. He believes in ‘the flesh and the appetites’. ‘Copulation is no more rank to me than death is.’ The scent of armpits is ‘aroma finer than prayer’. His faith is in nature, not logic or learning.

He has witnessed everything. He walked ‘the old hills of Judaea with the beautiful gentle God by my side’. He has known battles and shipwrecks, martyrdoms and witch-burnings and disasters, and accepts them all.

Almost all Whitman’s poems share the dynamism and exuberance of ‘Song of Myself ’ along with its beliefs and its boundless optimism. Addressing his partner in ‘A Woman Waits for Me’, he hymns the act of sex and its immeasurable results.

‘Crossing Brooklyn Ferry’ (which plied where Brooklyn Bridge is now, and was an everyday trip for Whitman), he feels countless crowds of the future jostling among the passengers.

Learn more about Walt Whitman and his poems

Ouyang Xiu (1007–1072) was a Chinese essayist, historian, poet, calligrapher, politician, and epigrapher of the Song dynasty.  As a poet, he was a noted writer of both the ci and shi genres.

Learn more about Ouyang Xiu and his poems

Ann Yearsley (1752–1806) was a Bristol milkmaid who lived to publish four volumes of poetry, as well as A Poem on the Inhumanity of the Slave Trade (1788), In her ‘The Indifferent Shepherdess to Colin’ the speaker reprimands her lover for imagining that she will fall into the trap of marriage. Yearsley did, however, marry a yeoman farmer and they raised six children.

Learn more about Ann Yearsley and her poems

Zbigniew Herbert (1924–1998) was a poet, playwright, and essayist born in Poland in the city of Lvov, which is now a part of the Ukraine. In 1939 Poland was overrun by Soviet and Nazi troops, and Herbert joined the Polish Resistance Movement. After the war his home town, Lwow, became a Ukrainian Soviet city and its Polish population was expelled. In the 1960s he travelled abroad, visiting various European countries and America. He was a signatory to the 1975 ‘Letter of 59’, which opposed the Polish government’s declaration of eternal loyalty to the Soviet Union. In 1981, during the Solidarity movement, he returned to Poland, and joined the editorial team of an underground journal.

Refusing to adhere to socialist realism, the only literary mode Communism permitted, he did not publish till the mid-1950s. His poetry is profoundly moral, but subdued, casual and often ironic in tone, at times experimenting with humorous fantasy, and always avoiding anything declamatory. His poems do not foresee any kind of victory. Defeat is inevitable. But that does not alter the poet’s responsibility, spelt out in the poem ‘The Envoy of Mr Cogito’.

Learn more about Zbigniew Herbert and his poems 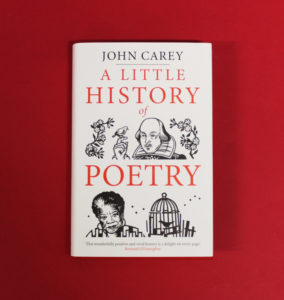 A Little History of Poetry

This A-Z of Poets is based on John Carey’s A Little History of Poetry.

In the book, John Carey tells the stories behind the world’s greatest poems, from the oldest surviving one written nearly four thousand years ago to those being written today. Carey looks at poets whose works shape our views of the world, such as Dante, Chaucer, Shakespeare, Whitman, and Yeats. He also looks at more recent poets, like Derek Walcott, Marianne Moore, and Maya Angelou, who have started to question what makes a poem “great” in the first place.

For readers both young and old, this little history shines a light for readers on the richness of the world’s poems—and the elusive quality that makes them all the more enticing.

Following in the footsteps of E. H. Gombrich’s worldwide bestseller A Little History of the World, the books in our Little Histories series explore the history of the world’s most remarkable people, events and ideas. With engaging personal insights, our authors will take you on a whistle-stop journey from ancient times to the present – exploring all of life’s big subjects from archaeology to science. Other Little Histories available include, Philosophy, Economics, Science, Literature, Language and Religion. More details about the whole series can be found on the Little Histories website.

An A-Z of Poets for Classroom Use

Teachers and librarians can find a downloadable and printable version of the full A-Z of Poets below. This version contains suggestions of how this resource could be used in the classroom or library. The download button is in the top left of the frame below.

Unpacking My Library: Writers and their Books by Leah Price was published in November 2011 to immediate acclaim…