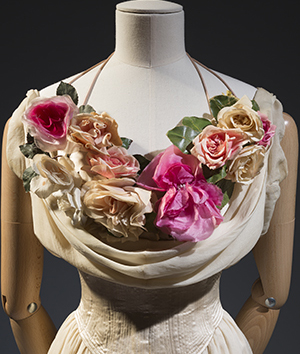 In this blog, Amy de la Haye gives readers a taste of her latest book, The Rose in Fashion: Ravishing, which explores how and why the rose has remained an enduring motif in all aspects of fashionable dress—from 18th-century woven silks to the latest gender-neutral catwalk trends.

[Notes for a speech given at the Chicago fashion guild dinner. Sherman Hotel, 3 June, 1958]

The rose – the most ravishingly beautiful and fragrant of flowers – is inextricably entwined with fashion and dressed appearances (the latter embraces perfume, grooming, jewellery, body adornment and gesture). 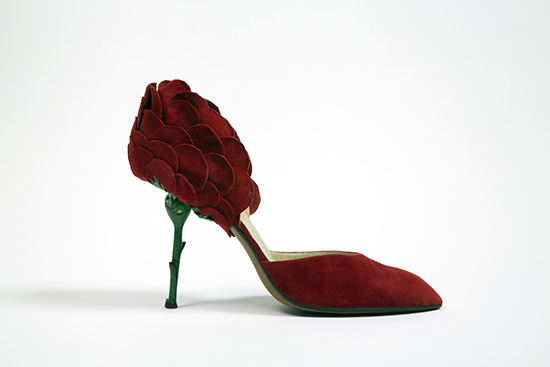 V Buso, ‘Rose’ shoe, USA. c.1960. Suede and metal. The Museum at FIT, New York, P90.78.2. This gorgeous shoe might be interpreted within the context of Surrealism’s preoccupations: the illusion of nature, displacement and improbability (a rose supports a person).

This blog provides some historical context on the wearing of fresh and artificial roses. It is illustrated with photographs of objects, dating from the 18th century that have been drawn from the superlative collection at the Museum of the Fashion Institute of Technology (MFIT), New York, where an exhibition will be staged in early 2021. Whilst the most refined, innovative and challenging designs, which this collection foregrounds, are featured, a central premise is that almost everyone can wear, and feel transformed by wearing, one or more fresh or artificial roses. As the author of the perennially popular (amongst white skinned, middle class women; other women and men were excluded from the metaphors) book Les Langes de Fleurs (1819) made explicit, whilst the rose might be the queen of flowers it is also one of the most common. 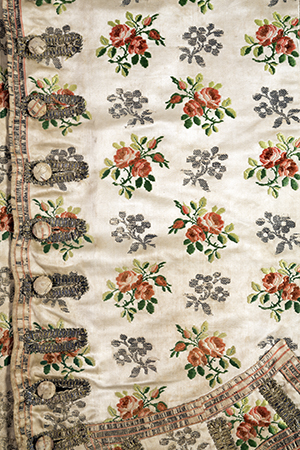 Waistcoat (detail), France, c.1780. Ivory silk brocade with gold metal embroidery. The Museum at FIT, New York, 93.132.4. The lavish menswear styles of the 18th-century indicated the wearer’s status and good taste. Use of gold thread indicates that this waistcoat was worn at the French court.

Genus Rosa is believed to date back some 35-40 million years. The rose is resilient, promiscuous and rambunctious, which accounts for its longevity and broad geographic sweep. Fresh roses have been worn since at least ancient Egyptian times and it was the Egyptians (who rued the absence of fresh flowers so keenly) who made the first artificial flowers, known as permanent botanicals, from stained horn. The oldest undisputed image of the rose can be seen in the ‘Blue-bird’ fresco from the House of Frescoes in Knossos, Crete, painted c.1,500 BCE and roses were cultivated were cultivated in Mediterranean countries, China and Persia from 500 BC.

In her seminal book The Symbolic Rose (1954) Barbara Seward wrote, ‘Not only do its roots extend to at least to the beginnings of recorded time, but its petals embrace the deepest positive values ever held by man. Although the flower is equalled in age and profundity by such fundamental symbols as sea, sun, bird, star and cross, it would be difficult to prove that it has been surpassed by any’ (1954: 1). Not surprisingly the rose and the savage thorns (technically they are prickles) that protect it – a conjunction of opposites – have provided a fertile source of inspiration for designers, artists and writers, who have drawn allusions to love, beauty, sexuality, sin, gendered identities, rites of passion, transgression, degradation and death.

In ancient Rome, the rose was so adored that a lavish annual festival – Rosalia, also known as Rosatio, meaning rose adornment – was staged in its honour. Within Roman culture, wreaths or chaplets (circlets worn on the head) and garlands (longer, strung) of roses played a vital role in economic, domestic, religious and ceremonial life. Long before flowers became gendered feminine (in the 19th century) roses were awarded to men for heroic and virtuous acts and it was men who wore rose perfume (women preferred stronger oils such as myrrh and sweet marjoram). Sexuality lies at the core of a flower’s existence. More than any other flower, the rose was to become personified as feminine and analogies drawn (mostly by men) between the flower and the body, its sexuality and fertility. 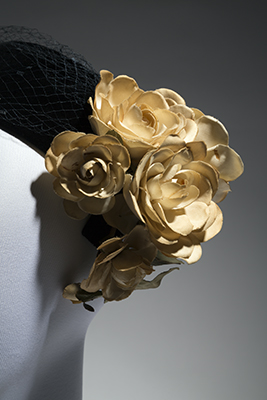 The artificial flower making industries developed slowly and found its most exquisite and naturalistic expression in Paris where, by the 1860s, the craft formed a core ancillary trade to the haute couture houses. Their demand for roses to decorate hats and dresses was so great that some workshops specialised in making only the flower or its bud. At this time, the French led not only international fashion, but also created the vogue for breeding roses – both industries whetting desires with an ever-tempting array of new colours, textures and forms. The wearing of a single rose or bud as a boutonnière, also known as a favour or buttonhole, became commonplace for men. More abundant was a corsage of fresh roses and/or buds that a woman wore – often, on the left side of her dress bodice, close to the heart.

Flowers have become a fashion mainstay. Historically, their wear was most evident when those they imitated were in bloom, but in recent years the collections, presented within the context of a global industry, have become less seasonal in their focus. Until the 20th century, the depiction of roses on painted, embroidered, woven and printed textiles was mostly naturalistic. Thereafter more abstracted interpretations became fashionable, expressive of particular movements in art and design. 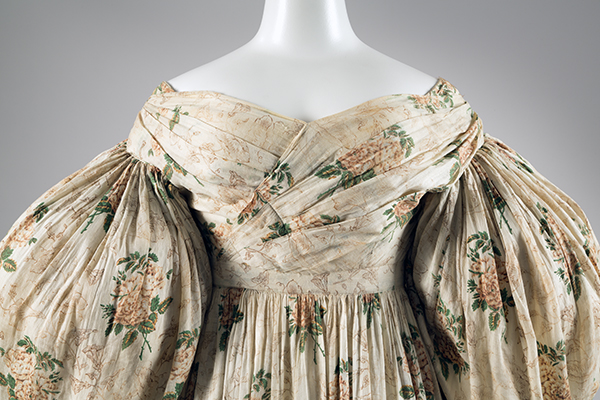 Day dress (detail), USA, 1830-33. Printed cotton. The Museum at FIT, New York, 94.92.1. Gift of Marcia Wallace. This lightweight voluminous dress, with its immense gigot sleeves, is made from a sheet cotton with a printed design of rose clusters and a shadow trailing design of bindwind (Convolvulus arvensis). 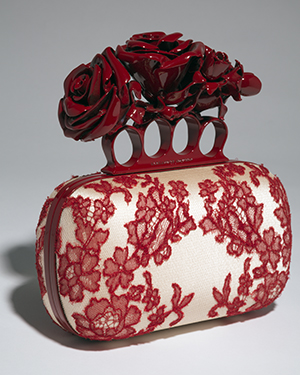 In the 21st century the rose has been foregrounded and referenced by an unprecedentedly politicised fashion industry to draw attention to issues surrounding race, gender and identity.

Fashion’s rosarian was Lee Alexander McQueen (1969-2010). From the 1990s, the designer interpreted roses in the contexts of deathliness and decay and in the 2000s demonstrated a joyful love for the flower within his work. Tragically, in 2010 McQueen took his own life; his signature twinning of the skull and rose, which symbolised the fragility of life and fleeting beauty in 15th century Dutch vanitas paintings, became all too prescient. His colleague Sarah Burton took the creative helm and has continued to reference roses in her designs. Her personal reference comprises memories of rose festivals during her Lancashire childhood. 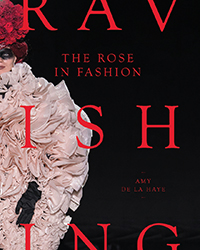 Amy de la Haye is professor of dress history and curatorship at London College of Fashion and joint director of the University of the Arts Centre for Fashion Curation.

Her latest book, The Rose in Fashion: Ravishing, is a beautifully illustrated, fascinating exploration of how the rose has inspired the way we look, dress, feel, and fantasise over hundreds of years. Find it on our website or at your favourite bookshop.

Read a free extract from Chapter IV of The Rose in Fashion – “The Rose: The Unfading Flower of Jewellery” here.

Chapter I: A Conversation on Roses
Nick Knight and Amy de la Haye

Chapter VI: The 19th Century: ‘I Would like my Roses to See You’
Amy de la Haye

Chapter VIII: The 20th Century: ‘A Rose is a Rose is Rose’
Amy de la Haye

David Keen is the author of the controversial new book Useful Enemies: When Waging Wars is More Important Than…