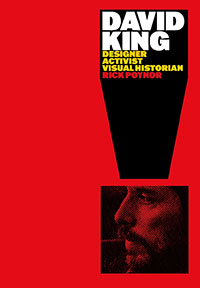 Captivating design can be a powerful conduit for disseminating important messages to a wide audience, and in the late 1970s & 80s, British designer David King gave social justice causes of the day an unmistakable and impactful visual form.

In this blog, professor Rick Poynor explores the significance of King’s iconic protest posters and the ways in which he utilised his skills in graphic design to create materials for The Anti-Apartheid Movement and the Anti-Nazi League that decried abuses of power across the globe. Find out more about King’s incredible body of work, which spanned design, journalism, photography and visual history in David King: Designer, Activist, Visual Historian.

Protest posters designed by the British designer David King (1943-2016) in the late 1970s and 1980s look as relevant as ever in the era of Black Lives Matter. King’s career began at The Sunday Times Magazine where, for ten years, he worked as an art editor and visual journalist. His approach to visual communication and engaging the reader was focused and hard-hitting. The designer’s key task was always to convey the essence of an issue or story as concisely and forcefully as possible. King’s visual activism was remarkable for its cogency and impact. It has sometimes been suggested – and he didn’t disagree – that the posters defined the look of left-wing graphics in Britain. No other body of work from the time comes close to equalling their feeling of controlled anger and their immense rhetorical punch. 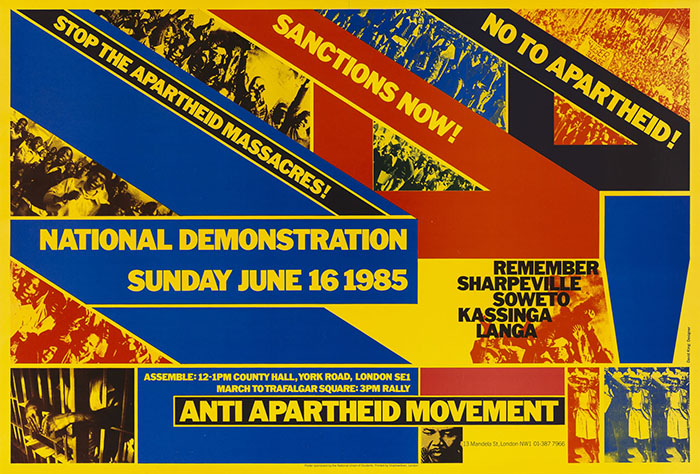 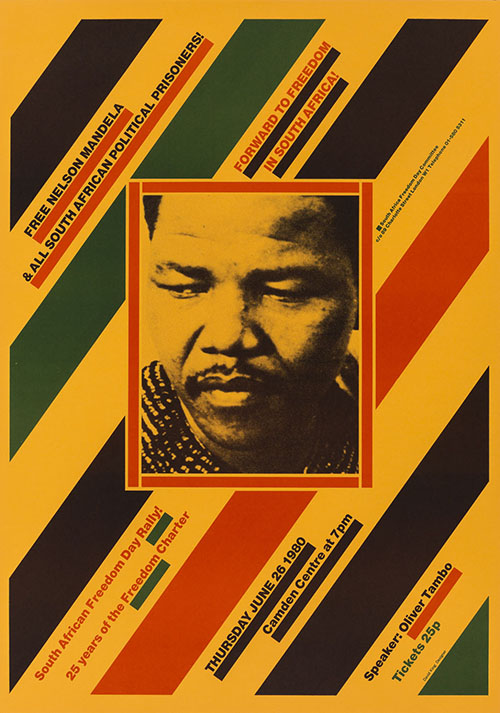 Designing for the Anti-Apartheid Movement

Most of King’s posters concentrated on the cause of anti-racism. In 1976, he was outraged by the massacre of school children in Soweto by the South African police, during protests about the introduction of Afrikaans for teaching in schools. A television documentary about racism in South Africa spurred him into action. The following morning, he went to the London offices of the Anti-Apartheid Movement, told them he was a graphic designer and said he wanted to do some work for them.

At that stage, King had already created a few – mainly typographic – posters protesting about the imminent deportation of the American writers Philip Agee and Mark Hosenball by the British Government. But his early experience was as a page designer and he was still finding his feet when it came to the requirements of poster design. King’s first posters for the Anti-Apartheid Movement represent a significant jump in compositional confidence. All of the posters make commanding images their central feature. A series of four, with red type on severe black backgrounds, demands that all South African political prisoners should be released. The most savage, ‘Stop Deaths in Detention!’, shows the body of Joseph Mdluli, who was arrested by the South African police in March 1976, and died in custody within 24 hours as a result of extensive injuries consistent with beating and torture. The image is deliberately uncomfortable. A large black accusatory arrow points at Mdluli’s corpse, defying the viewer to look away. The red uppercase letters roar with defiance. 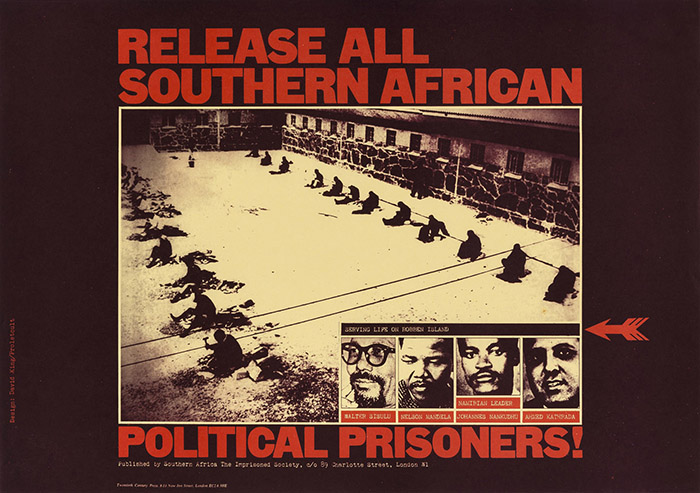 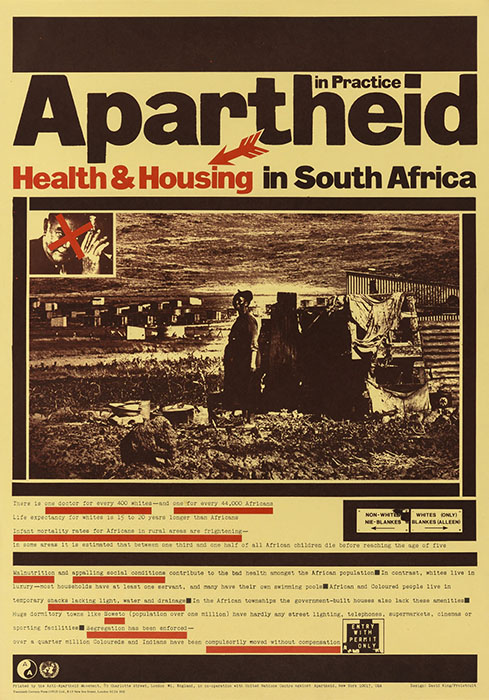 In the other early series, titled ‘Apartheid in Practice’, King makes full use of his journalistic knowhow. Each poster focuses on an aspect of black experience under apartheid: law and order, jobs and wages, education, health and housing, and land. King ensnares the main photograph with heavy slab rules, as though underscoring the image from every angle. He also deploys these emphatic bars – derived from early modernist graphic designers such as El Lissitzky – to underline key words in the posters’ brief informative texts supplied by AAM: ‘white domination’, ‘separate and unequal’, ‘harassed, restricted and banned’, ‘malnutrition’, ‘shacks lacking light, water and drainage’. The combination of dynamic bold type for the headlines, which King always favoured, with a speedy typewriter typeface for the text gives the posters intense visual conviction, distilling shocking evidence of systemic racism and profound social injustice into graphic memos of great moral urgency.

The Anti-Nazi League & Rock Against Racism 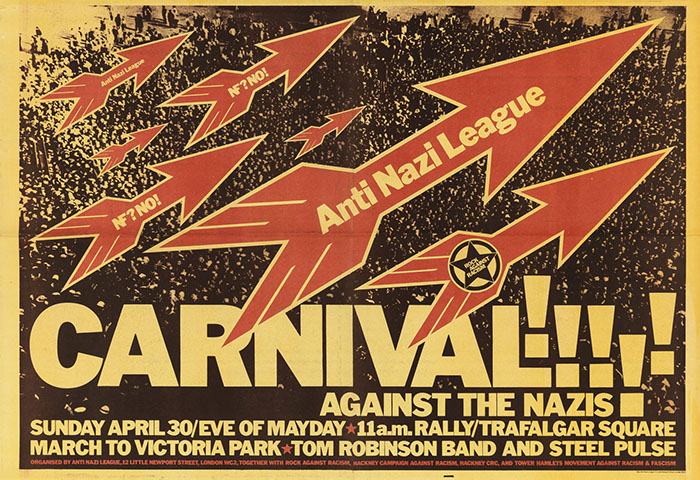 David King, ‘Carnival Against the Nazis!’, Anti-Nazi League with Rock Against Racism, 1978.

King’s principal clients in the late 1970s and early 1980s were the AAM and the Anti-Nazi League, launched in 1977 by the Socialist Workers Party to combat the racist, anti-immigrant campaigning and agitation of the far-right National Front. King had already created a logo like a sheriff’s star for Rock Against Racism and he performed the same service for ANL, designing an arrow with the group’s name inside. On the ‘Carnival Against the Nazis!’ poster (1978) – now seen as a classic of protest design – he launched a squadron of airborne logos over a swelling crowd of anti-racists to uplifting effect, to promote a rally in Trafalgar Square and march to Victoria Park, London, where black and white musicians played side by side in solidarity. King’s other clients and causes included the African National Congress, the Zimbabwe Emergency Campaign Committee, and the United Nations Centre Against Apartheid.

“An unwavering commitment to change” 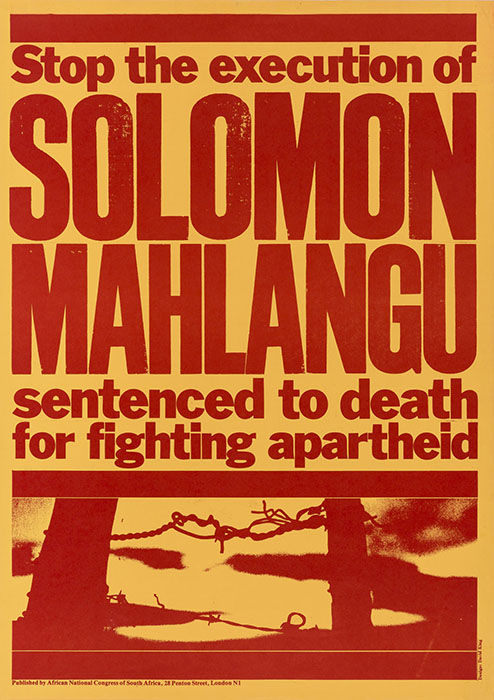 When asked about his priorities as a designer, King always insisted that he was concerned about content and not visual style. He cared deeply about social justice and he was appalled by abuses of power. His choice of targets reflected this lifelong, principled stance, and he took no payment for his work on the posters. His unmissable designs brought a sense of collective identity and indomitable resolve to these struggles. Nevertheless, as the six posters illustrated here are enough to show, King was also a master of captivating form. The posters are aesthetic objects. He cared about his designs and he wanted them to be good. This is a why the posters are celebrated today and it is what activists can still learn from their example. King developed a personal style, based on his well-honed skills as a visual journalist, which placed maximum stress on the message. The exclamation marks seen everywhere in his posters could have been corny or shrill, yet his control of the medium was so assured that he made them spark with a natural exuberance and an unwavering commitment to change.

Rick Poynor is professor of design and visual culture at the University of Reading and a founding editor of Eye magazine. Order his latest book David King: Designer, Activist, Visual Historian here.

Discover our ongoing series of ‘Conversations About Global Racial Injustice‘ blog posts, where you’ll find extracts from works that explore our society, share different perspectives and take lessons from the past. Topics covered so far include the history of slavery, understanding protest, and colonialism.