Learn more about key concepts in Western European art history and gain further insight into the paintings and artists showcased in the National Gallery, London collection with our A Closer Look at Art campaign.

Each week we will be sharing an extract from an A Closer Look guide that explores a foundational subject or theme in painting, from landscapes to portraiture, along with links to free National Gallery, London resources so that you can discover even more about the artwork and artists you are introduced to.

This week we’re turning our attention towards Christian religious painting – and focusing in more specifically on the imagery of saints and angels. In the extract below, Erika Langmuir explains how and why artists used unique signifiers to help viewers identify different saints; including Saint Lawrence’s gridiron in a work by Adam Elsheimer, and Saint Catherine’s wheel.

In the Judaeo-Christian tradition, saints, or ‘holy ones’, are not merely good, pious people. Nor are they necessarily mystics blessed with visions, or miracle-workers, although miracles have become a benchmark of sainthood. They are heroes for God. The first Christian saints – if one excepts the Virgin Mary, John the Baptist and the Apostles – were the martyrs, put to death because, refusing to sacrifice to the pagan gods of the Roman state religion, they were viewed as politically subversive. The word martyr means witness, and these witnesses to their Christian faith were specially honoured for their devoted imitation of Christ, who suffered and gave his life as a witness to God’s love of humanity. 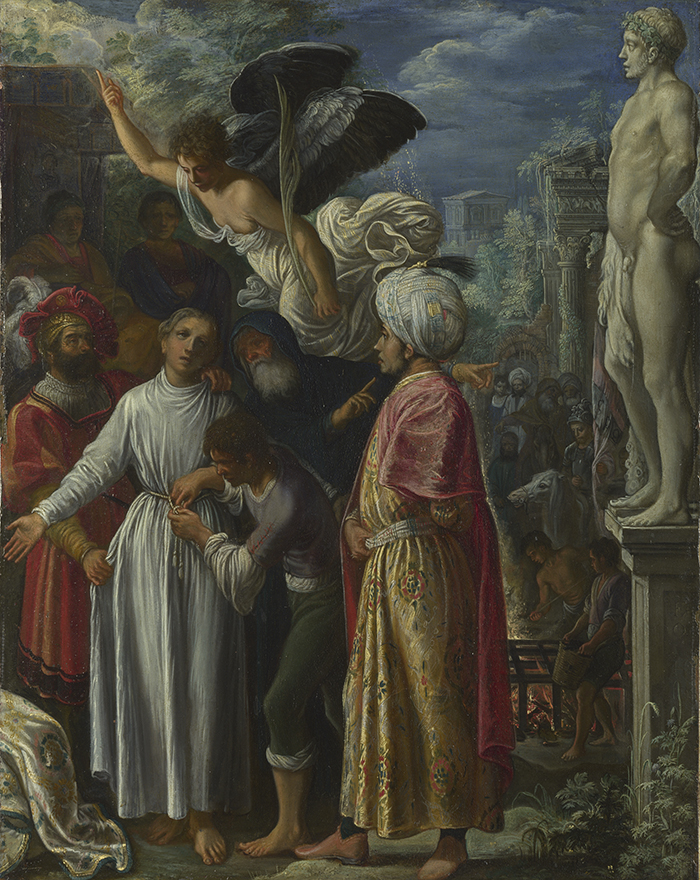 Just as the pagans awarded palm branches to victorious athletes, so Christian imagery often awards palms to martyrs. In Adam Elsheimer’s Saint Lawrence prepared for Martyrdom, one of God’s angelic messengers, visible only to Lawrence, swoops down from the skies to present the young martyr with his palm. To demonstrate that they are ‘unbelievers’, Lawrence’s persecutors are shown wearing exotic clothes. Their commander is dressed like a Turk, while the costume of the man on the left recalls that of a sixteenth-century German, and may be meant to suggest a Lutheran Protestant. In a final bid to save Lawrence’s life, a bearded old man, hooded in black like a Roman priest, urges the saint to worship a stone idol. The ruins in the background are those of ancient Rome. According to legend, Lawrence, a young archdeacon of the Church, was martyred in Rome around the year 258 ad by being roasted on a gridiron – shown in the middle distance with half-naked executioners stoking the raging fire beneath it. 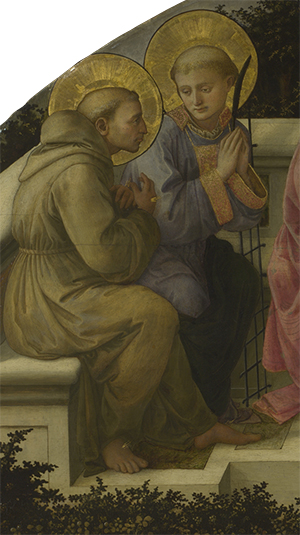 If we know Saint Lawrence’s story from having either heard it told or read it in The Golden Legend, we can easily grasp the subject of Elsheimer’s narrative picture. Nor should we have much difficulty recognising the image of Saint Lawrence in other contexts. The Netherlandish painter Memling represents him without his martyr’s palm, giving him a book instead; yet who else but Lawrence could be depicted as a youth in the liturgical dress of a deacon, holding a gridiron? These same attributes help us to recognise him as the saint chatting to Saint Francis in a picture by the Italian friar, Fra Filippo Lippi.

Catherine of Alexandria was another third-century martyr, and, like Lawrence’s gridiron, her wheel and sword recall the means of her martyrdom. She was, it is said, ordered to be torn to death between spiked wheels. When a burst of fire from Heaven destroyed the wheels, she was decapitated with a sword instead. Even those totally ignorant of her story commemorate both martyr and miracle in the name of a firework, the ‘Catherine wheel’ – and a wheel is the clearest pictorial sign by which we identify her image. 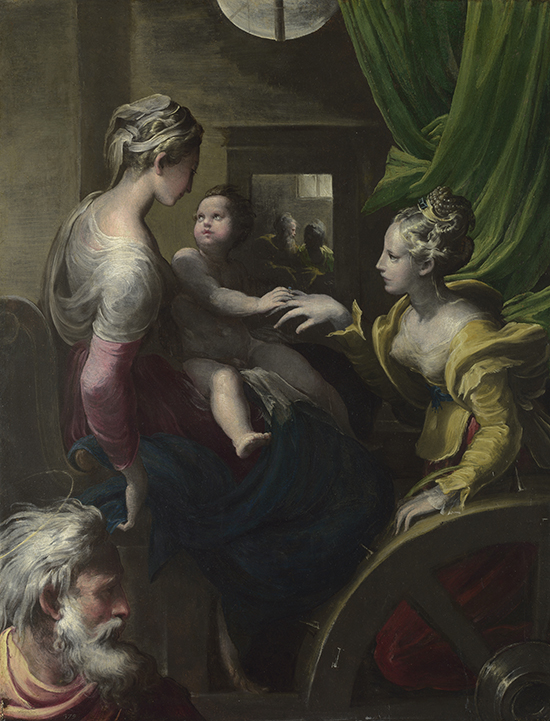 Parmigianino. The Mystic Marriage of Saint Catherine. About 1527-31. © The National Gallery, London.

Catherine’s legend also recounts a vivid dream she had when she was baptised into the Christian faith. In this dream, the Christ Child on his mother’s lap took Catherine to be his celestial bride, slipping a ring on her finger as a token of their mystic marriage. Even though this event long preceded Catherine’s martyrdom, Parmigianino includes the spiked wheel in the foreground of his Mystic Marriage of Saint Catherine. Indeed, it would seem that the arc and spokes of Saint Catherine’s attribute inspired the entire composition: from the round window – whose vertical glazing bar implicitly bisects the whole painting, focusing our gaze on where Christ’s and Catherine’s hands meet – through the graceful two- and three-dimensional curves in which the figures are posed and the drapery falls.

An Introduction to Art by Charles Harrison
Art and Architecture in Italy, 1250-1400 by John White (3rd ed.)

Blog Featured Image: Probably by Fra Angelico. The Virgin Mary with the Apostles and Other Saints. About 1423-4. ©The National Gallery, London.

Alex Katz, This is Now – The Catalogue

‘Like the ancient Greek philosopher Plato, he is searching for the real forms that we usually see only…