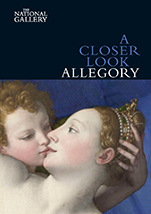 Learn more about key concepts in Western European art history and gain further insight into the paintings and artists showcased in the National Gallery, London collection with our A Closer Look at Art campaign.

Each week we will be sharing an extract from an A Closer Look guide that explores a foundational subject or theme in painting, from landscapes to portraiture, along with links to free National Gallery, London resources so that you can discover even more about the artwork and artists you are introduced to.

In this extract from A Closer Look: Allegory, Erika Langmuir highlights the importance of Ancient Graeco-Roman mythology as a source for allegorical imagery, particularly in the Renaissance period, as well as the crucial political role fulfilled by the work of Rubens and Bronzino; encouraging peace between warring nations, and flattering the powerful princes of Europe.

Ancient Graeco-Roman mythology was perhaps the richest and most versatile source of allegorical imagery, and the one most popular with Renaissance and later artists. Pagan deities could convey messages for the public good or flatter pleasure-loving princes and courtiers. They could gratify dynastic pride or embody astrological lore. All these aspects of allegory based on pagan myth are illustrated in the paintings discussed in this section.

Allegory for the public good

Peter Paul Rubens, collector, scholar, and twice-knighted diplomat, was probably the greatest painter of allegory in the history of art. Few artists since the Middle Ages have been more dedicated to communicating ideas through visual images.

‘Those things which are perceived by the senses,’ he wrote, ‘produce a sharper and more durable impression, require a closer examination and afford richer material for study than those which present themselves to us only in the imagination.’

In 1628–30 Rubens undertook his most important diplomatic mission: to procure peace between Spain and England. His negotiations successfully concluded in the summer of 1629, he was delayed in London and found time to practise his ‘beloved profession’. In 1630 he presented Minerva protects Pax from Mars, or ‘Peace and War’, to King Charles I, as a deliberate attempt to maintain that picture-loving monarch’s enthusiasm for peace. 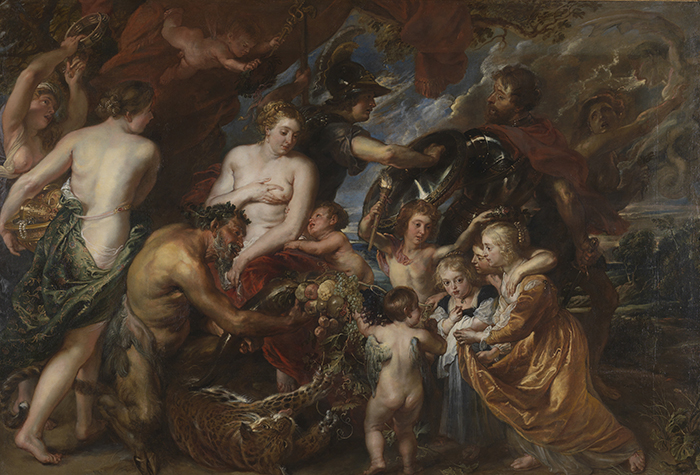 Like all allegories, Peace and War requires decoding, although even minimally educated contemporaries would have had little difficulty in identifying most of Rubens’s personifications, drawn from classical mythology and made familiar by pictorial tradition. But Rubens’s paintings are never bloodless picture-puzzles, and even a twenty-first-century viewer, who may miss some of the allusions, readily grasps this picture’s central message.

Rubens must have intended our gaze to be drawn by the lustrous glance of the little girl who stares trustingly out of the canvas – the only figure to do so. She is a real child: Susan, daughter of Rubens’s host in London, the painter and royal agent Balthasar Gerbier. Dressed in contemporary seventeenth-century clothes, she seems to hesitate before popping a grape into her mouth.

Susan’s brother George, in the guise of the torch-carrying Roman god of marriage, Hymen, reaches over her to crown their older sister Elizabeth. The girls are urged forward by an adolescent Eros (perhaps an earlier, less readily recognisable, portrait of George).

We, who can see what is happening behind them, tremble for these innocent beings. Only the forceful intervention of helmeted Minerva, the goddess of wisdom, protects them from the baleful god of war, Mars, black-armoured and cloaked in blood red, and his attendant, Fury. Their side of the picture has been put to the torch, all smoke and smouldering fires. Susan’s direct appeal mobilises our instinct to preserve the children’s fragile happiness, to help Minerva defend the golden realm they inhabit: that of Peace, invoked by the Greek poet Hesiod as ‘Protector of Children’. 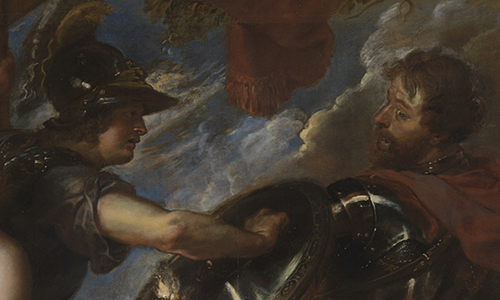 Allegory to flatter princes and courtiers

While Rubens, in 1630, devised Peace and War with all the vividness of a narrative ‘to produce a sharper and more durable impression’ of the message already conveyed through his diplomatic work, Bronzino’s aims, in An Allegory with Venus and Cupid, painted in the 1540s, are more ambiguous.

Bronzino had become chief painter at the hierarchic and despotic Florentine court of Duke Cosimo I de’ Medici, and his style had modified accordingly. Although he was still capable of fidelity to nature, as in his portraits of Cosimo’s children, his other works were marked by ostentatious artifice and aristocratic aloof-ness – none more so than this Allegory. 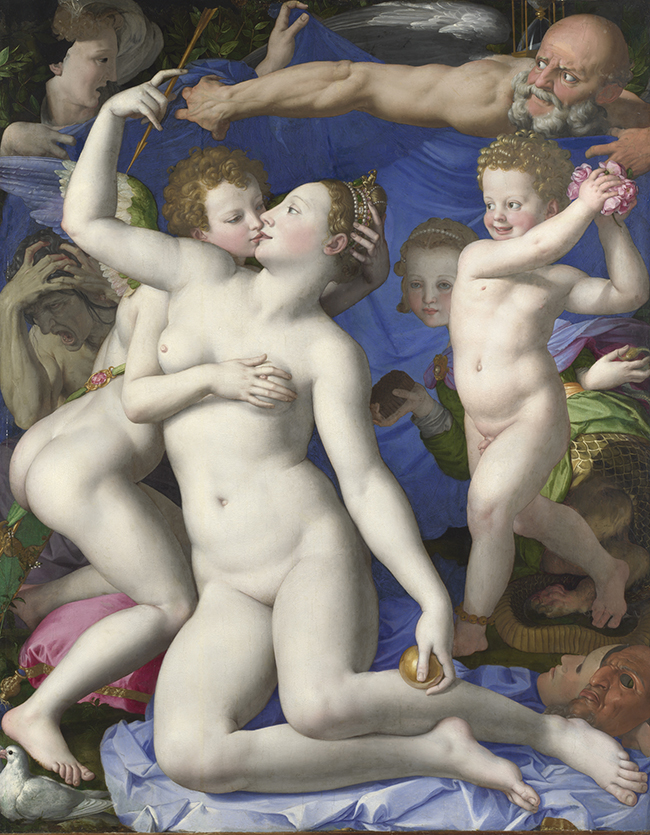 Bronzino. ‘An Allegory with Venus and Cupid’. About 1545. © The National Gallery, London.

The painting would have made a suitable gift for Francis and his courtiers. Its puzzling character would have appealed to them just as much as its nudity and eroticism, both justified through reference to Graeco-Roman antiquity. The stylishness of the jewelled accessories, and the costliness of the ultramarine in the magnificent blue drapery, would have been additional attractions.

Whatever its precise origins and significance, this painting was surely intended for a special kind of private viewing – to flatter, titillate, and tantalise the (male) viewer. In addition to figures from pagan mythology, it includes personifications probably invented by Bronzino himself. 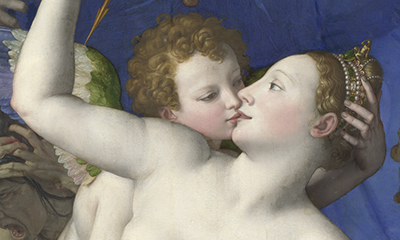 Detail from ‘An Allegory with Venus and Cupid’ showing Venus and Eros.

In the centre foreground of Bronzino’s Allegory, Venus is lasciviously embraced by her son Cupid – in this adolescent form more properly called by his Greek name, Eros. In her left hand Venus holds the golden apple awarded her in the mythological Judgement of Paris; with her right she draws an arrow from Eros’ quiver. The act is itself enigmatic: some have read it as the Triumph of Beauty over Love, but as Venus herself (on close examination of tongue and nipple) seems no less sexually aroused than Eros, this cannot be the moral of the picture. Eros kneels on a silken cushion, while below him we see two of the doves that draw Venus’ chariot. At the goddess’s feet are three masks, perhaps symbolising vanity; it has also been suggested that the most evident two represent a satyr and a nymph. 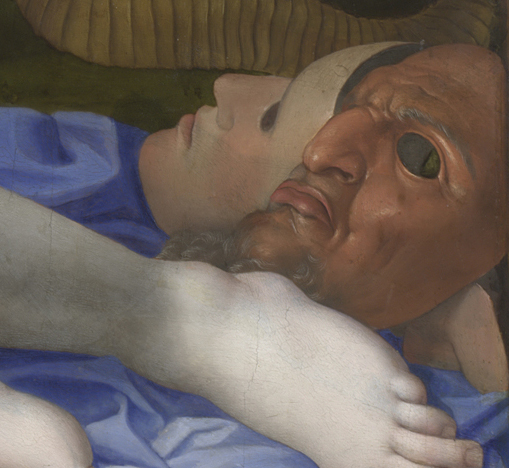 Detail from ‘An Allegory with Venus and Cupid’ showing (suggested) satyr and nymph masks.

At once alluring and repellent, lubricious and censorious, legible and obscure, hot and cold as polished marble, full of action yet perfectly static, the picture recalls the poetry of the period. This often relied on oxymoron – the conjunction of contradictory terms to produce a striking effect, as in ‘icy fire’ or ‘beautiful tyrant’ – and sought formal perfection while expounding the cruelty of beautiful women and the pangs of love. Bronzino, like his great contemporary Michelangelo, was also a poet, and perhaps the true meaning of this endlessly fascinating painting resides in its resemblance to its sister art: a painting like a poem.

– An Introduction to Art by Charles Harrison
– The Wrath of the Gods: Masterpieces by Rubens, Michelangelo, and Titian by Christopher Atkins
– Painting in Renaissance Venice by Peter Humfrey

Blog Featured Image: Bronzino. ‘An Allegory with Venus and Cupid’. About 1545. © The National Gallery, London