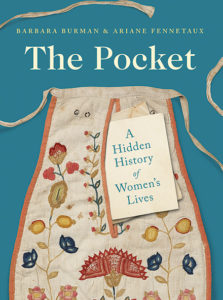 In the summer of 2020, we ran a very special design competition to celebrate the release of the paperback version of The Pocket: A Hidden History of Women’s Lives, 1660–1900. Participants were asked to submit their own unique design for the decoration or embellishment of an 18th-century style detachable pocket for the chance to win £100 of Yale fashion history books (and a copy of The Pocket, of course).

“Work’d pocketts to my intire sattisfaction,” wrote Gertrude Savile (1697-1758) in her diary in 1727. Decorating, often but not exclusively in embroidery, a single or a pair of pockets was something that most eighteenth-century women and girls would have routinely done for themselves or others. Surviving examples of pockets in museum collections show how women chose to decorate their pocket fronts in a variety of styles and motifs, no two were the same. They offer a rare glimpse into an intimate practice. Outside the caprices of fashion or pressures of keeping up with more ostentatious display, these pockets reveal how women chose to undertake decorative needlework just for themselves, on an item which represented more private and secluded facets of their lives. 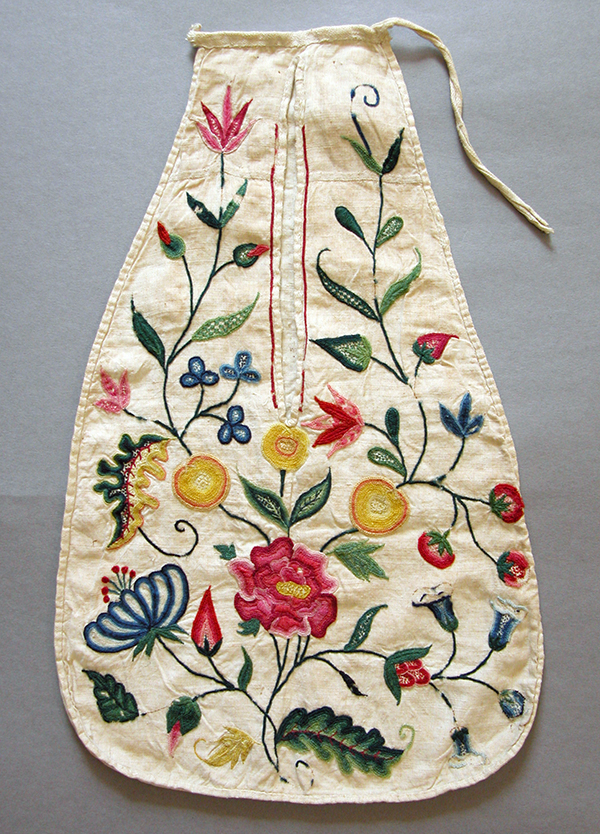 Embroidered pockets date mostly from the 18th century although a few are early 19th century when plain pockets mostly dominated. Embroidered examples all show just as many signs of wear and tear as undecorated ones, suggesting that although they were the result of painstaking needlework, they were not overly precious because a decorated pocket was expected to serve a practical everyday function like any other pocket of its type. They were made as single ones but more often as attached pairs with two fronts embroidered in similar styles. They were usually worked on linen and fully or half-lined inside to protect the back of the stitches.

Pockets needed to have a smooth face to minimise abrasion when worn underneath garments so raised work or metallic thread were not suitable, neither were fabrics with pile surfaces and backs were never embroidered.

There was no shortage of sources of ideas for embellishing a pocket. Embroidery patterns were sometimes included in magazines for numerous projects such as an apron or a handkerchief. Several patterns “for a lady’s pocket” appeared in the fashion press of the times; such as one featuring a hot air balloon, a bold and ‘modern’ take on a famous event of the period, or more naturalistic designs of flowers. The Lady’s Magazine featured several including one recently discovered by ‘embroidery pattern sleuth’ Jennie Batchelor, featuring rows of nut-eating squirrels!

Pockets could be purchased with a pattern ready ‘drawn’ (designed) or even ready ‘worked’ (embroidered) or you could take a pocket of your own making to a shop to be drawn or worked for you. And of course you could simply design your own, drawing your intended design in pencil or ink on the surface before work began. Some decorative schemes may have been taken from books of motifs, or, as was common, copied from friends or family members. 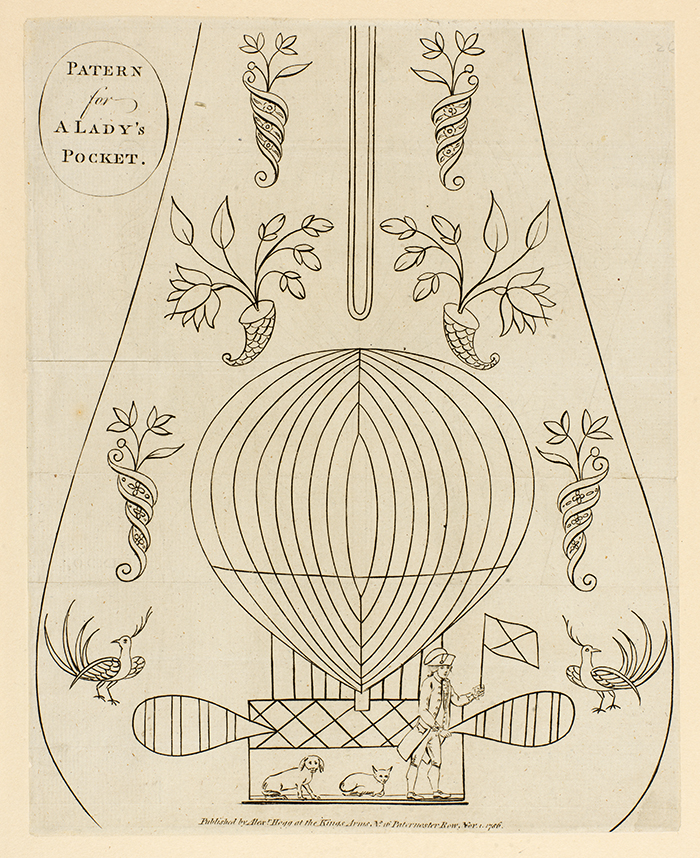 Other decorative items of a similar size, such as nightcaps or stomachers, might offer inspiration or sources to copy. The decorated pockets that survive most often display idiosyncratic and personal approaches, sometimes endearingly naïve or wonky. These touching compositions say much about the maker’s skill but also her commitment to making her pocket front just as she wished, a small but expressive space that could reflect her own personal tastes, not for display but for the maker’s own satisfaction.

The simplest decoration consisted of a single row of plain stitching in whirling or vermicular shapes, in common with other items of clothing. More often the work recalls a love of nature, with more complex flowers, leaves, curving stems. Some exhibit almost 3D close observation of real flowers. It appears almost habitual across generations for makers to ground their design with a vase, or larger flower at the base below the opening. Sometimes flowers are grouped with birds and animal motifs whilst human figures sometimes appear but remain rare. 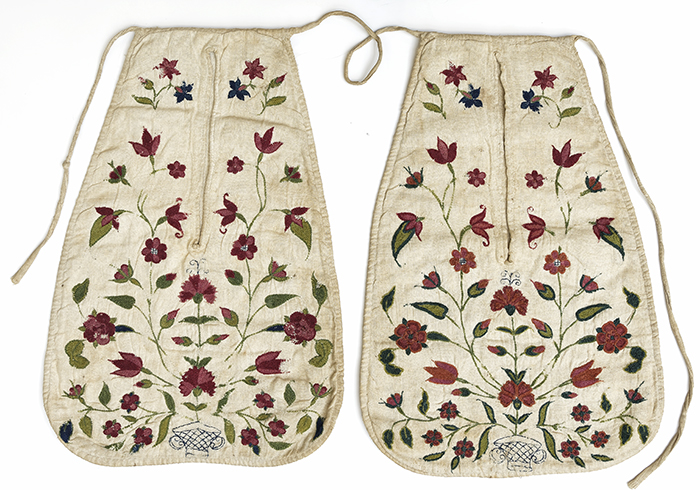 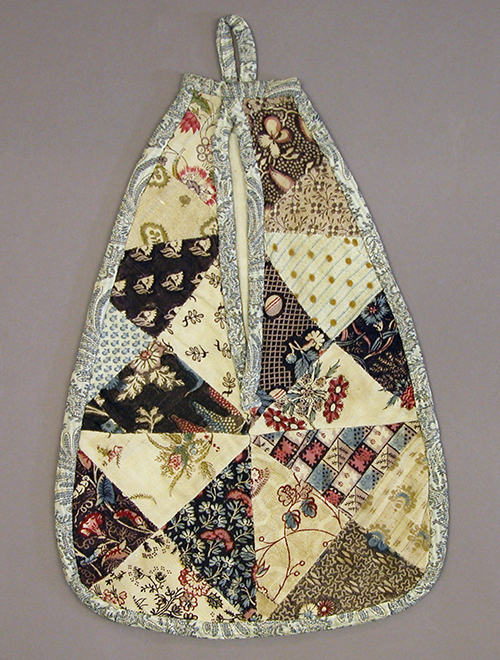 Whatever the design, a common pattern was to have the decoration – flowers, leaves and stems – worked around the outer edge of the opening and also sometimes round the outer edge of the pocket, suggesting a way of delineating the space but also perhaps symbolically protecting the contents, whilst offering structural reinforcement to an area, the opening, most susceptible to wear and strain. Although embroidery was the most common type of decoration for a pocket, there were others such as appliqué or patchwork. Some were carefully pieced together from scraps of different printed cottons. One shows cheap and cheerful use of appliqué cotton pieces with touches of added embroidery.

As Gertrude Savile (1697-1758) reveals in her diary that she worked her pockets pleasantly sitting outside in the garden in the summer of 1727, at home in London, over several days, sometimes with her mother, sometimes alone, sometimes drinking coffee, we are reminded that ‘needlework’ was often undertaken as a sociable activity with friends, a time to share news as well as patterns or stitches. So ornamenting pocket fronts was often a domestic, relaxed and sometimes therapeutic occupation. It was also a chance to personalise an enduringly popular item of everyday wear. We hope it can be again, perhaps especially during Covid-19 restrictions when many people have rediscovered the joys of stitching of all kinds. And, after all, the pocket promises to be useful when excursions beckon.

It’s only a few months until the London 2012 Olympic Games kicks off this summer, but where did…