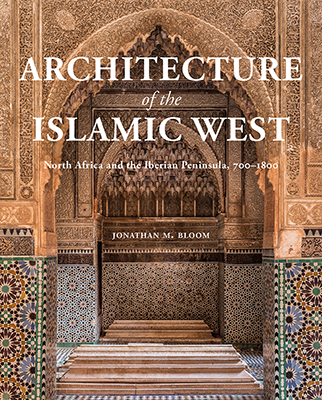 Some of the most outstanding examples of world architecture, such as the Mosque of Córdoba, the ceiling of the Cappella Palatina in Palermo and the Alhambra Palace in Granada, belong to the Western Islamic tradition. This architectural style flourished for over a thousand years along the southern and western shores of the Mediterranean, blending new ideas with local building practices from across the region.

Despite this, when Jonathan Bloom tried to teach an undergraduate course on the architecture of the Islamic West in the early 1980’s, he found there was virtually nothing he could give to his students to read on the subject: they didn’t speak French or Spanish, and much of the limited English-language material was either too general or too specialised. Nearly forty years in the making, Architecture of the Islamic West: North Africa and the Iberian Peninsula, 700-1800 seeks to redress this oversight. Read on for a unique insight into how and why this book was written and a closer look at some stunning examples of Western Islamic architecture. 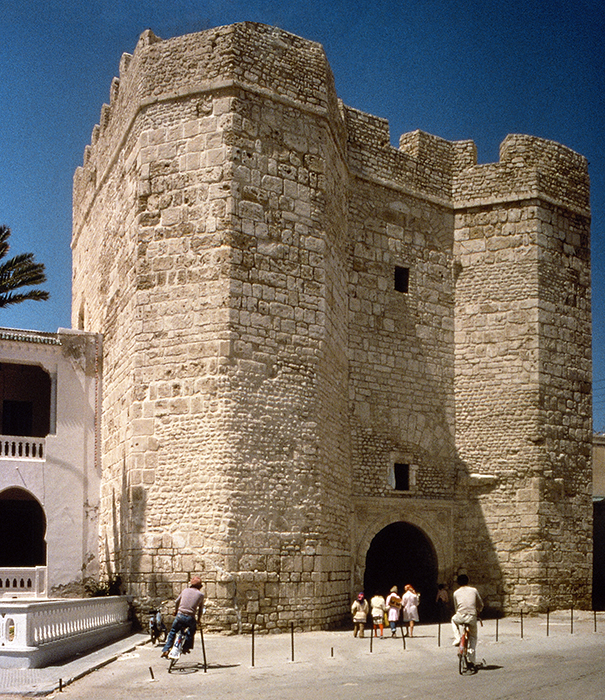 Like many of my generation, in the early 70s I spent the requisite week in Istanbul during a trip hitchhiking in southern Europe, but my real introduction to a Muslim country and Islamic architecture was during a 6-month stint after college working on a project to study Roman mosaics in Tunisia. On weekends the team travelled around the country in an old Peugeot station-wagon looking at Roman and Islamic sites. This was long before group tourism had transformed the Tunisian coast with walls of glitzy beachfront hotels, and we’d head off to the sleepy coastal town of Mahdia for a fish dinner and marvel at the Skifa al-Kahla [fig. 1], the massive city gate built in the 10th century when Mahdia was the capital of the Fatimid empire in North Africa.  I eventually wrote my dissertation (and another Yale book, Arts of the City Victorious) about the art and architecture of the Fatimids.

We travelled to Kairouan to see its 9th-century congregational mosque [fig. 2], perhaps the finest surviving example anywhere of the classical hypostyle (many-columned) mosque. We’d wander in the suqs (covered markets) of Tunis’s medina (old city), passing by El Mrabet, a café in continuous operation since 1630 and part of a complex of buildings comprising a mosque, madrasa, elementary school, water fountain, and public toilets erected by the ruler Yusuf Dey. 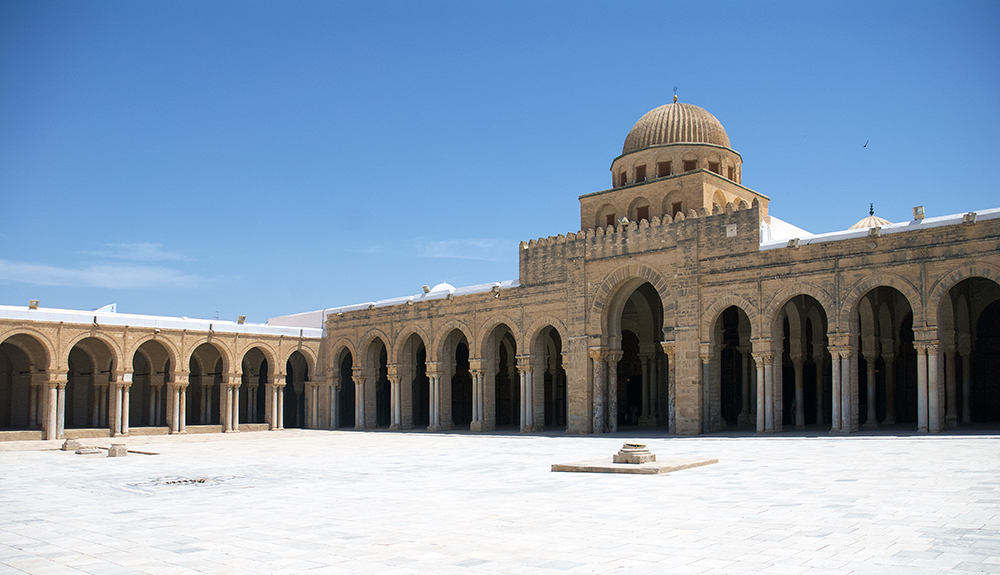 When I returned to the States and began graduate studies in Islamic art, I was disappointed that North Africa got so little attention, although the Iberian peninsula—home of the Mosque of Córdoba [fig. 3] and the Alhambra palace [fig. 4]—got a bit more. Of course, surveys of Islamic art and architecture (even general books on art history) dutifully mention them, as well as a few other buildings from the western lands of Islam, but they usually save their fire for the more structurally innovative and impressive buildings of the central and eastern Islamic lands—Egypt, Turkey, Iran, Central Asia, and India—with their massive domes, soaring minarets, and ravishing tile revetments.

In that sense, the architecture of the western lands of Islam—northern Africa (excluding Egypt), Sicily and the Iberian peninsula—is more structurally conservative and introverted although decoratively rich and intellectually challenging. Most of the buildings have quite plain exteriors, with decoration concentrated around doorways, giving little sense of the treasures that lie inside.  In the series of palaces that comprise what we call the Alhambra, there are no great structural innovations, but the variety and quality of the decoration—carved and painted plaster, glittering mosaics of cut ceramic tile, ceilings of muqarnas (“stalactites”) [fig. 5] or intricately joined wood, etc.—are not only extraordinary but also rich in symbolism made specific by the poetic and Quranic inscriptions found everywhere.

Although Europeans were fascinated by the “Moorish” remains in Spain at least from the 18th century, English speakers have largely seen the architecture of the western Islamic lands as something of a poor cousin to what many might consider its more glamorous relatives in the east.  French and Spanish audiences were arguably more receptive to the architecture of the region, not only because of the long (711-1492) presence of Islam on the Iberian peninsula but also because both France and Spain had long colonial involvements in Tunisia, Algeria, and Morocco. The great preponderance of scholarship—even by North Africans themselves—has been in French and Spanish. The Alhambra is the most popular tourist attraction in Spain, hosting over 2 million visitors a year, and the Moroccan cities of Fez [fig. 6] and Marrakesh—whose medinas are UNESCO world heritage sites—remain popular tourist destinations. 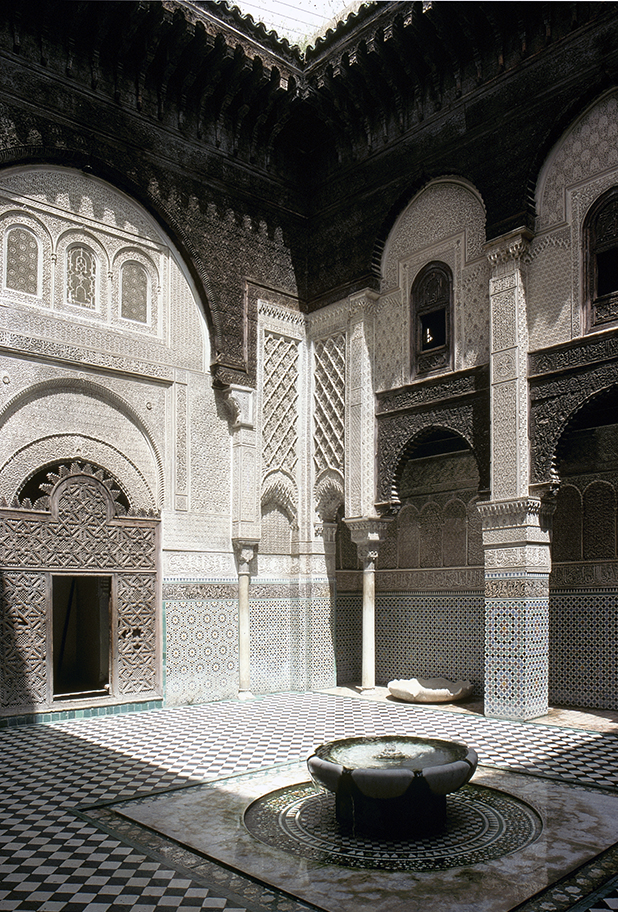 Over the years I’ve returned several times to Tunisia and made many trips to Sicily, Algeria, Morocco, Spain and Portugal, although political events such as the Algerian revolution and the Arab Spring—not to mention such practical issues as jobs, money, children, and time—have sometimes made travel difficult or even impossible.  In addition, unlike other areas of the Muslim world, in North Africa non-Muslims are normally forbidden to enter mosques, although they can visit madrasas (theological schools) [fig. 7] and other historic buildings.

Consequently, I’ve had to rely not only on what I could see with my own eyes but on what many others have seen and written. My greatest challenge in writing this book, however, has been striking a balance between scholarly comprehensiveness and accuracy on the one hand and accessibility on the other. This is a book not only for fellow scholars and students of art and architectural history, but also for travellers—both intrepid and armchair—and readers curious about the history and art of this region.  I hope it will introduce all readers to an extraordinarily rich world and encourage them to further explore these marvellous buildings in a wonderful and welcoming region of the world.

Find out more about his latest book, Architecture of the Islamic West: North Africa and the Iberian Peninsula, 700-1800 on the Yale University Press website.