How do you pack an illustrious writing career of over half a century into a single book? With great difficulty according to the eminent art critic, Michael Peppiatt.

In this introduction to The Making of Modern Art: Selected Writings, Peppiatt reflects on the complex processes involved in shaping an anthology of his own work, and the realisations he came to about himself and his personal interactions with the modern art world.

Michael Peppiatt on how ‘The Making of Modern Art’ was made … 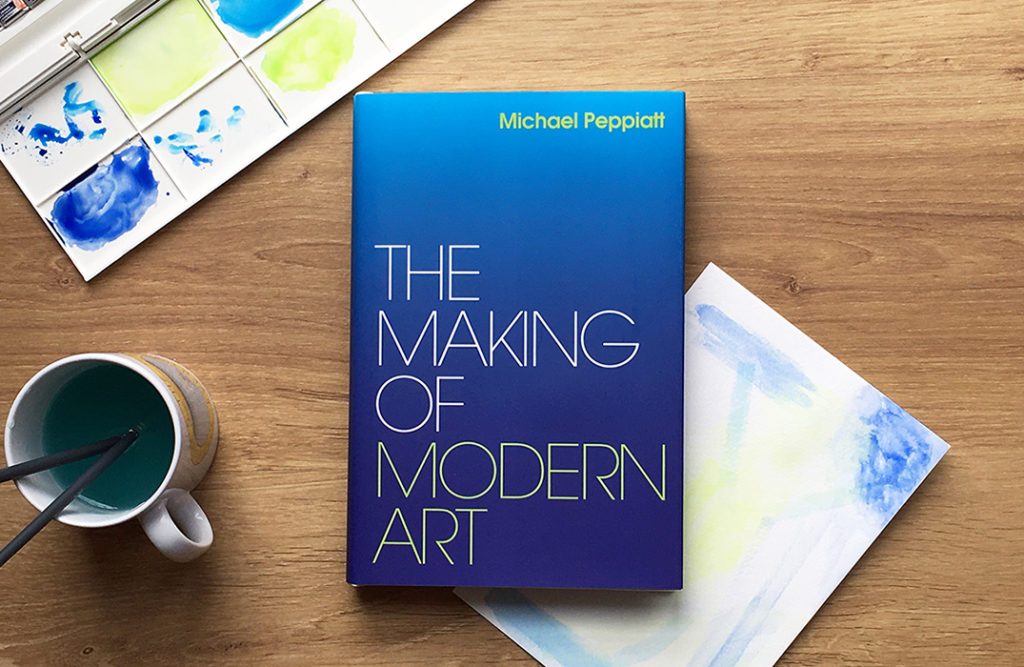 Like most things in life, The Making of Modern Art did not start out the way it is now, neatly bound between sky-blue covers and radiating a sense of careful, long-planned order. It began piecemeal, with articles written in the 1960s by a young art critic who had just started a job as junior editor at Réalités, a Paris arts magazine, and it grew throughout the following decades until the most recent essays included here, written a full half-century later.

Since I wrote extensively about art throughout that time for a wide variety of newspapers, magazines and exhibition catalogues, there was never a shortage of material. Once they were gathered together, the texts suggested a huge, unfinished mosaic, with sudden clusters of titles on Egyptian or Renaissance art here, Khmer sculpture or Scythian gold there and, dotted all around, odd pieces about illuminated manuscripts, African tribal masks, Japanese inro and so on.

It didn’t take long, however, for a pattern to emerge. For every piece devoted to an ancient or exotic aspect of art, many more were directly concerned with the development and the myriad highways and byways of modern art. That came as no surprise since, after a brief introduction to the history of art at university, I had been involved with modern art and artists from the moment I did an interview with Francis Bacon for a student magazine in 1963. The latter stroke of luck got me involved with painters such as Hockney and Freud, Auerbach and Kitaj, all of whom, like Bacon, figure prominently in this book.

Those encounters also helped me land my first professional involvement in art as an occasional reviewer of gallery exhibitions in London for The Observer. These brief notices have long disappeared into the dust of time, but they stood me in good stead when I applied for the job at Réalités. It was in their gloomy but otherwise very lively offices not far from the Opéra where my art education really began, since I was required to turn myself regularly into an overnight expert on any art form that cropped up within the magazine’s glossy covers. This involved numerous escapades ranging from being suspended on scaffolding under the Sistine ceiling while it was being photographed to burning the midnight oil before interviewing Balthus or finding myself crushed in bear hugs by Sandy Calder (as described in the book).

This accelerated apprenticeship enabled me above all to extend my grounding in modern art, since I wrote about many of the contemporary artists most in favour at the time, not only for Réalités but for other publications in the UK and the US. I had no idea then, of course, that I might one day have enough of a backlog to ‘reconstruct’ a parallel history of modern art – even if, like any history, it would include its fair share of prejudices, blind spots and lacunae. However, once the overall scope, which extended roughly from the Impressionists to the ‘School of London’ painters, emerged, the real work got under way. And if I had entertained any notion that an anthology of this kind would be easy to put together, I was soon disabused.

Firstly, the choice of contents was far from obvious. Certain pieces that I remembered fondly as being among the more perceptive turned out, when re-read, to belong on the contrary to the more slick and superficial; others had lost their original relevance or simply stuck out awkwardly once they had been admitted tentatively into the canon. Even when whittled down, the final selection weighed in at some forty different pieces, so that categories with sub-headings were introduced in order to emphasise various sequences and contrasts among the chosen texts. Then, naturally, every essay needed attentive editing, even though, and sometimes partly because, they had first been published elsewhere. Finally, an introductory note was added to each piece to put it more in context and ease the flow of the whole volume.

As a result, I hope, The Making of Modern Art now reads as a coherent whole. Clearly, if it had started out as a conscious attempt to resume the course of art from the late 19th century to our own time it would have been a very different, more objective and evenly paced book. But those kinds of overviews are readily available, and unless one feels impelled to revise existing accounts radically there seems little point in adding to them. Odd hybrid that this anthology is, it has a few characteristics, and possibly advantages, that a deliberately planned survey would not.

Firstly, it evolved quite spontaneously, almost organically; then, since it was written over a very long period, it benefits from a constantly changing perspective, since the author, although still on good terms with his former self, is no longer the fresh-faced beginner who wrote the earliest pieces here.

And that is perhaps what differentiates the book most. It is not only a history of art, but the history of a particular person’s involvement with it, over a whole lifetime, in every imaginable situation and mood. Some of these pieces were written as part of the everyday round of a (mostly freelance) arts journalist; others were commissioned as prefaces for exhibition catalogues; a few came about as favours to artist friends whose work I admired (and for which I was often recompensed by the gift of the artist’s work). Rereading the odd review here, I can see the skylight illuminating someone’s studio or smell freshly squeezed oil paint.

Taken all together, these texts add up fragment by fragment to a portrait, not only of modern art and those who contributed significantly to it, but of the author himself. As I described my favourite artists, I did not realise until now that they, as through a glass, darkly, were reflecting likenesses of me.

Michael Peppiatt is an internationally respected authority on 20th-century art and the author of numerous books on modern artists. He has written regularly for Le Monde, the New York Times, the Financial Times, Art News, and Art International magazine.

Find out more about The Making of Modern Art:

It is 600 years since the birth of Joan of Arc,  the heroine who led the French army during…