As an aid to students, teachers and parents dealing with the challenges of home learning, we have constructed an A–Z of the World taken from E. H. Gombrich’s, A Little History of the World. Day by day, we will be sharing a bite size introduction to a historical figure, event or period – using Gombrich’s magical words – along with links to free resources, so that readers of all ages can discover more.

Before we make a start on our A-Z, we’re turning to Gombrich himself, to take us on a majestic journey from ancient history to modern, in just under 700 words.

E. H. Gombrich: Imagine time as a river, and that we are ﬂying high above it in an aeroplane. Far below you can just make out the mountain caves of the mammoth-hunters, and the steppes where the ﬁrst cereals grew. Those distant dots are the pyramids and the Tower of Babel. In these lowlands the Jews once tended their ﬂocks. This is the sea the Phoenicians sailed across.

‘Imagine time as a river, and that we are ﬂying high above it in an aeroplane.’

What looks like a white star shining over there, with the sea on either side, is in fact the Acropolis, the symbol of Greek art. And there, on the other side of the world, are the great, dark forests where the Indian penitents withdrew to meditate and the Buddha experienced Enlightenment.

Now we can see the Great Wall of China and, over there, the smouldering ruins of Carthage. In those gigantic stone funnels the Romans watched Christians being torn to pieces by wild beasts. The dark clouds on the horizon are the storm clouds of the Migrations, and it was in those forests, beside the river, that the ﬁrst monks converted and educated the Germanic tribes.

Leaving the deserts over there behind them, the Arabs set out to conquer the world, and this is where Charlemagne ruled. On this hill the fortress still stands where the struggle between the pope and the emperor, over which of them was to dominate the world, was ﬁnally decided. We can see castles from the Age of Chivalry and, nearer still, cities with beautiful cathedrals – over there is Florence, and there the new St Peter’s, the cause of Luther’s quarrel with the Church. The city of Mexico is on ﬁre, the Invincible Armada is being wrecked off England’s coasts. That dense pall of smoke comes from burning villages and the bonﬁres on which people were burnt during the Thirty Years War. The magniﬁcent chateau set in a great park is Louis XIV’s Palace of Versailles. 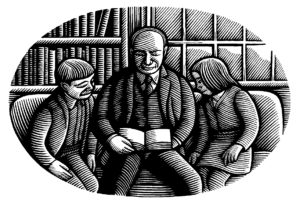 Here are the Turks encamped outside Vienna, and nearer still the simple castles of Frederick the Great and Maria Theresa. In the distance the cries of ‘Liberty, Equality and Fraternity’ reach us from the streets of Paris, and we can already see Moscow burning over there, and the wintry land in which the soldiers of the Last Conqueror’s Grand Armée perished. Getting nearer, we can see smoke rising from factory chimneys and hear the whistle of railway trains. The Peking Summer Palace lies in ruins, and warships are leaving Japanese ports under the ﬂag of the rising sun.

Here, the guns of the World War are still thundering. Poison gas is drifting across the land. And over there, through the open dome of an observatory, a giant telescope directs the gaze of an astronomer towards unimaginably distant galaxies.

But below us and in front of us there is nothing but mist, mist that is dense and impenetrable. All we know is that the river ﬂows onwards. On and on it goes, towards an unknown sea. But now let us quickly drop down in our plane towards the river. From close up, we can see it is a real river, with rippling waves like the sea. A strong wind is blowing and there are little crests of foam on the waves. Look carefully at the millions of shimmering white bubbles rising and then vanishing with each wave. Over and over again, new bubbles come to the surface and then vanish in time with the waves. For a brief instant they are lifted on the wave’s crest and then they sink down and are seen no more. We are like that. Each one of us no more than a tiny glimmering thing, a sparkling droplet on the waves of time which ﬂow past beneath us into an unknown, misty future. We leap up, look around us and, before we know it, we vanish again. We can hardly be seen in the great river of time. New drops keep rising to the surface. And what we call our fate is no more than our struggle in that great multitude of droplets in the rise and fall of one wave. But we must make use of that moment. It is worth the effort.

The Little Histories are vivid storybook introductions for the young and old alike. Inspiring and entertaining, each short book lays out our greatest subjects in deceptively simple, engaging tones. With charming and personal insights each expert gently takes the reader from ancient times to the present through bite size chapters, ideal as bedtime reading or on the journey to work. Other Little Histories available include, Philosophy, Economics, Science, Literature, Language, Religion and Poetry. More details about the whole series can be found on the Little Histories website.

We’ve had an exciting year here at Yale UP London, with highlights such as a Nobel prize-winning author,…