Escape Into Art, Look Through the Lens of History, Seek Certainty in Science …

To help us all keep on reading over the coming weeks, we’ll be sharing sample chapters, extracts, author interviews and articles here on the Yale Books Blog. Missed our latest post? You can find everything under Time to Read.

Today’s extract is from chapter 17, ‘Hellfire and Redemption 1797-1801’, from Stephen Taylor’s, Sons of the Waves: The Common Seaman in the Heroic Age of Sail.

The bloodiest mutiny in naval history broke out just months after the Nore, and it may be suggested that Captain Hugh Pigot was among those officers whose notions of discipline were contaminated by those events. The truth is Pigot had already given ample proof of his brutality. He had risen with the absurd ease that betokened interest – an admiral father – and was given his first frigate aged twenty-five. Indulged as well as privileged, he was insecure, whimsical and subject to irrational rages, yet came under the protection of the West Indies commander-in-chief, Vice-Admiral Hyde Parker.

The log of Pigot’s first ship, the Success, shows that over thirty-eight weeks he ordered eighty-five floggings: in total, 1,392 lashes, roughly thirty-six a week, were imposed on a crew of 160. Actually, Pigot had his particular favourites, so eight men absorbed the majority of those blows. Two, John Charles and Jeremiah Walsh, died as a consequence.

The punishment details on Pigot’s next ship, the frigate Hermione, can only be imagined because they were lost in the nightmare that started to unfold on 20 September 1797, as she cruised off Puerto Rico. During a squall the captain bawled that the topmen aloft were not being active enough and the last one down from the mizzen would be flogged. In their haste to avoid a beating, three men fell to the deck and were killed, including a black lad of sixteen, Peter Bascomb, from Barbados. Pigot’s response to the trio of bodies splayed before him was an order: ‘Throw the lubbers overboard.’

The next day he had the other twelve topmen flogged anyway. 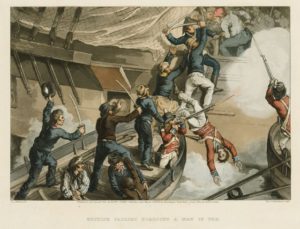 That night the door to his cabin was smashed in by several men wielding cutlasses and axes. Pigot, in his nightshirt, was hacked and slashed before being left, draped over a canon. Those leading this phase of the mutiny included David Forester, aged just nineteen from Sheerness, Joe Montell, an Italian, and Hadrian Poulson, a Dane – all maintopmen. Significantly, however, petty officers were also active, two of them bosun’s mates.

With the ship in their hands, the mutineers were joined by a number of other senior hands. They turned on a detested lieutenant, hacking him to death and throwing his body overboard. Next they went back to the cabin where Pigot, bleeding profusely but still alive, pleaded for mercy. ‘You’ve shown no mercy,’ shouted Montell. Pigot was carried to a stern window and pushed out. His cries were heard as he disappeared, trailing in Hermione’s wake. A shout went up: ‘Hughy is overboard! The ship is ours.’

Any notion that a more humane regime might replace him was quickly dispelled. More hands joined in, calling for reprisals against the officers. ‘Cut the buggers! . . . Heave the buggers overboard!’ A second lieutenant and a midshipman were slashed and thrown over the side. A bacchanalia of dancing, drinking and singing commenced.

Eighteen men had emerged as ringleaders, twelve Able hands and six petty officers. Another forty or so had taken a less active part. Half of the company had tried to stay out of the way altogether.

A new figure asserted himself. Lawrence Cronin, an Irishman, addressed the company, declaring himself a follower of France’s revolutionaries and insisting that every officer had to die. In the subsequent uproar a group broke into the gunroom. Amid shouts of ‘hand the buggers up’, the last of the three lieutenants, the surgeon, the purser, a marines officer and the bosun were hacked with hatchets and cast overboard. So too was the hapless figure of the captain’s clerk. Among those to the fore in these events, baying for blood, was the surgeon’s fourteen-year-old servant, James Hayes.

The Hermione had become no less a hell afloat in their hands than under Pigot.

The Hermione had become no less a hell afloat in their hands than under Pigot.

A measure of order was restored when William Turner, the master’s mate, accepted command. While the most violent faction continued to press for more killings and lives hung in the balance for days, a guard was formed around the remaining men of rank – the master, another midshipman (who was spared because he had been openly humiliated by Pigot), the carpenter and the gunner. They survived.

A course was set for Spanish territory, La Guaira in Venezuela, where the mutineers handed the ship over to the enemy. From there, most of the Hermiones went back to sea. Adopting aliases, they signed on French, Spanish and American ships.

The first arrests were made a few months later with the capture of a French privateer found to have five Hermiones on board, including the Italian Joe Montell. Executions followed directly, the dead being hung in chains upon gibbets.

The Admiralty’s zeal in pursuing Hermiones did not flag. By 1802 thirty three men had been captured. Twenty-four were hanged. The last was a leading mutineer. David Forester had served four years on another navy ship before he was spotted, by uncanny coincidence, on a Portsmouth street by Pigot’s steward. An identical fate befell the unfortunate William Bower, who had taken no active part but was seen ‘dancing, singing and drinking with the rest’. He too was sighted in Portsmouth four years later, and hanged.

The case of John Williams offers a rare instance of light. A Liverpool man with sixteen years at sea – and a wife and three children at home – he took no part in the mutiny and was palpably horrified by the whole affair. After coming ashore, he made his way home via a merchantman to surrender himself and at his trial produced a statement signed by the masters of six previous ships that he was ‘a peaceable quiet character and a very good seaman’. Williams was among the eight Hermiones to be acquitted.

That left more than 100 unaccounted for, including most of the ringleaders. Despite the rewards for information, none was ever heard of again. The revolutionary Cronin appears to have done quite nicely, though, settling in La Guaira and marrying.

Sons of the Waves: The Common Seaman in the Heroic Age of Sail
Stephen Taylor

“An excellent book, combining an original approach to the subject with original research. Jack Tar, the quintessential British hero, emerges from this collective biography as a self-confident fellow, part of the collective body that sustained national prosperity, security and power.”—Andrew Lambert

How do you talk to a Russian gangster?

In his new book The Vory: Russia’s Super Mafia, Mark Galeotti explores the underground world of the Russian mafia,…