Escape Into Art, Look Through the Lens of History, Seek Certainty in Science …

To help us all keep on reading over the coming weeks, we’ll be sharing sample chapters, extracts, author interviews and articles here on the Yale Books Blog. Missed our latest post? You can find everything under Time to Read.

A school teacher at the start of the war, Harry Rée renounced his former pacifism with the fall of France in 1940. He was deployed into a secret branch of the British army and parachuted into central France in April 1943.

A Schoolmaster’s War might seem like a romantic story of heroism and derring-do, but Harry Rée’s own war writings, superbly edited and contextualized by his son, the philosopher Jonathan Rée, are far more nuanced, shot through with doubts, regrets, and grief. Read on from an extract from Harry Rée’s wartime diaries.

It was a beautiful morning for a murder – a fine, sunny morning in July 1943, and I looked out of my bedroom window in the hotel over the green plateau, where the cow-bells were jangling; the sound drifted across the fields with the breeze. It was more than a breeze, really. At that time in the morning it was a cold wind, carrying with it still the memories of the snow-covered peaks of the Alps. What a ridiculous position I had got myself into. Here was I, a British officer, tying my tie in the upper bedroom of a French hotel, all prepared to kill a man after breakfast. In my bag was a revolver and a piece of rubber hosepipe stuffed with thick wire – a home-made ‘life-preserver’ (incongruous word). I hoped to be able to hit him over the head with it first so that I could then kill him at my leisure, quietly.

You see, he was a traitor this man, Pierre Martin, whom I was going to kill, and he was very dangerous. I had met him for the first time three months before. He had been introduced to me as a man who would be useful for transporting arms and explosives from our dumps in the countryside into the town of Dijon. He had a delivery van and he proved to be extremely effective. And at our very first meeting I took a liking to him. He had done six months in Dijon prison – arrested in 1941, suspected of helping British airmen to escape from occupied to unoccupied France. He was a big, cheerful man, with a kind smile. I got on very well with him. We both wanted to get on with the job, and we both liked good food and good wine. But if it were a question of one or the other – we would leave the food and the wine and get on with what had to be done. 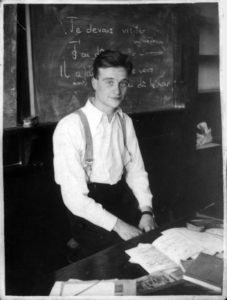 I remember the first job I did with him. We worked all night, climbing up to a cave in the side of a mountain to collect a dozen metal bins of arms and explosives. Shortly after midnight we parked the van just off the road and climbed for half an hour to this cave. Once inside the cave we were able to light torches, and we went clattering down the wet, black, flinty tunnels to the dump. We could only carry one bin at a time and it was a tricky business. The path down the mountain led through woods and across streams. It was steep and slippery. We had to make three journeys. By three in the morning we had finished and, as we did not want to set off for Dijon until it got light, I suggested we go into a nearby barn for some sleep. Pierre agreed and collected a bag from the van. We went into the barn: lovely smell of old hay. We lay down and good old Pierre opened his bag and brought out a long, crisp loaf and a hunk of local cheese and a bottle of wine. We shared the meal and topped it off with some brandy from his flask. Then we made ourselves comfortable in the hay and went to sleep till morning. By the next evening the arms were stored away in a cellar in Dijon.

Then I began to hear stories about Pierre from other Frenchmen who were working with me: stories that did not reflect too well on his character. He had been in the motor trade before the war and evidently had a reputation as a swindler. He had a wife and four children, but he was not living at home and he neglected them. He would be quite prepared to spend a thousand francs on a meal for himself, but he begrudged sending five hundred francs to his wife to pay the rent. But we knew we should not believe all the stories we heard about other people and Pierre continued to work very satisfactorily. Then one day in the middle of July he went out of Dijon in a taxi with another British officer, John Starr (‘Bob’). They were going to look for a suitable reception ground – a well-concealed field where aeroplanes from England could come and drop arms by parachute. Just before they left, Pierre said he had a telephone call to make. He went away and came back five minutes later. Five miles out of Dijon the taxi was stopped by the Germans. Pierre and Bob were arrested and taken to the Gestapo prison. Pierre was released the same afternoon, but Bob was kept in prison. I heard about it two days later in a note I got from Pierre himself: ‘Dear Henri, I can’t understand how they got me and Bob, nor why they released me and not Bob. Are you being followed? Take great care. Meet me Friday afternoon in the waiting room of Dijon station. Yours, Pierre.’

To cut the story short, I did not, of course, go to the waiting room. The boy in the café told me that all the Dijon group were against Pierre now. They realised he was a member of the Gestapo and they planned to kill him that Sunday, as Pierre was still pretending to be working with them. But that plan failed and within a week ten of them had been arrested. Then other people known to Pierre in other towns were arrested. One young man, a very dashing French officer called André Jeanney, said he’d get him. They met in a little village and talked about the future, because Pierre, as I said, still pretended to be working with us in the Resistance. André wanted to shoot him there and then but there were too many people about. So he hit on this plan. He told Pierre that I was losing my nerve with all these arrests going on, that I had retired to a little farm on the French side of the Swiss frontier, so as to be ready to run into Switzerland at the first sign of danger, and that I was proposing to hand over my organisation to Pierre. So André suggested that Pierre should come up to a little town near the frontier called Maîche, and André would meet him there, and guide him to my hideout. There we would discuss the details of handing over the organisation. Pierre agreed.

Harry Rée, DSO, OBE, was a British school teacher and educationist and a wartime member of the Special Operations Executive. Jonathan Rée, son of Harry Rée, is a freelance historian and philosopher. His books include Philosophical Tales, I See a Voice and Witcraft.

How to order our books

Our books can be ordered online from our website – but we also urge you to support local independent bookshops, who may be taking orders and making deliveries. Find out more from the Booksellers Association, or check out #ChooseBookshops and #indiebookshops on twitter. We’ve a thread @yalebooks for your suggestions too!

In Conversation with Graham Johnson