The latest volume in the acclaimed Pevsner Architectural Guides series is devoted to Cork, Ireland’s largest and most southerly county, home of the second city of the Republic of Ireland. The book is also the first of the six Buildings of Ireland volumes so far published to cover part of the southern province of Munster.

In this article, the book’s editor Simon Bradley introduces some of the many highlights, including the great Bantry House in West Cork and Charles Fort above the picturesque Kinsale harbour.

Our author is Frank Keohane, a native Corkonian now based in Dublin. His survey draws on the extensive research which underpins all volumes in the Pevsner series, and is also informed by his expert knowledge as a Chartered Building Surveyor specialising in historic buildings. The task was immense, as the timescale suggests: fieldwork began in 2008, working roughly anticlockwise from the south-east, and concluding with Cork city in 2017. 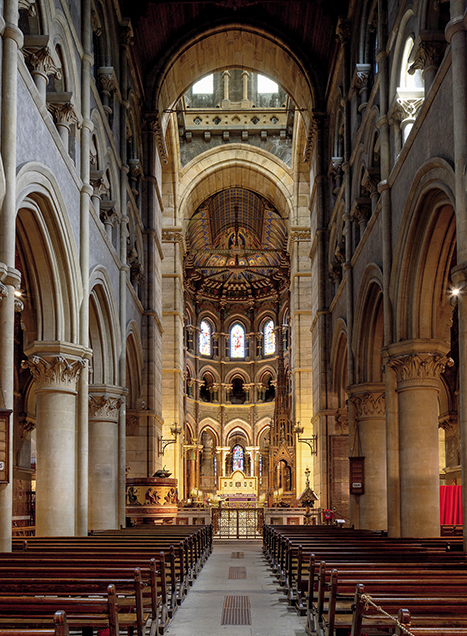 Many of the architectural highlights of this mighty county are in Cork city. Among the finest are two spectacular churches, one Catholic, the other Protestant, both by architects from outside Ireland.

The latter is St Fin Barre’s Cathedral, built for the Church of Ireland in 1865–79 to the designs of the English architect William Burges. Here the inspiration was Burges’s favourite early French Gothic, expressed externally in a compact, triple-spired outline, and internally in the soaring proportions of the nave and choir.

The early Gothic style is carried through to the details, including superb architectural carving and sculpture by Thomas Nicholls and local assistants, and sumptuous stained glass which Burges designed in collaboration with Horatio Walter Lonsdale and Fred Weekes. None of which came cheap: the project ran well over budget, and the towers and spires were constructed only after the bishop secured extra donations from two of the city’s wealthy distillers and brewers. 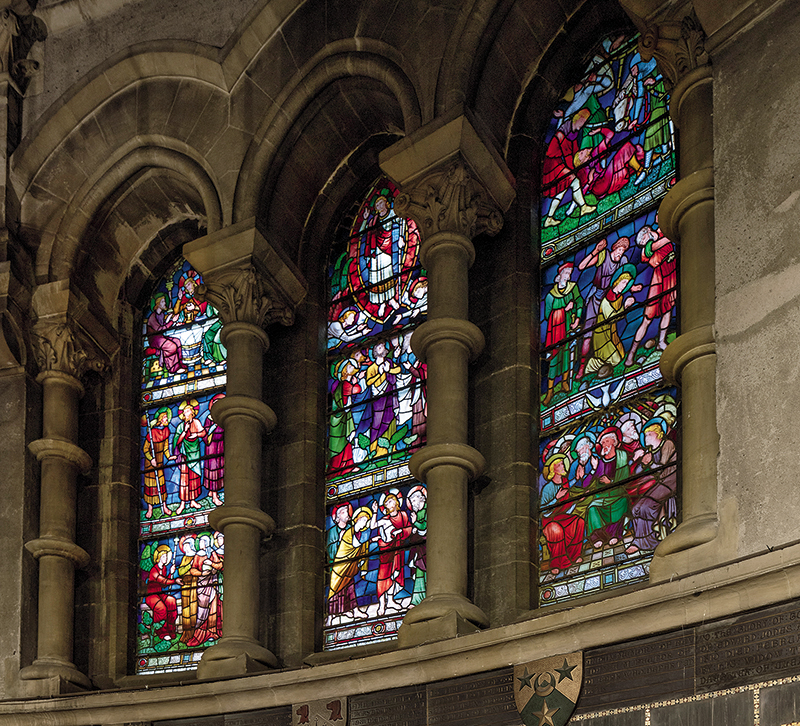 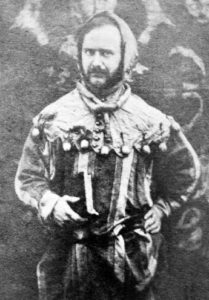 An associate of the Pre-Raphaelites, Burges had a celebrated sense of fun, which found expression in his love of fancy dress and his gift for creating dream-world interiors for wealthy clients such as the Marquess of Bute. By contrast, St Fin Barr’s shows the profound learning which underlay these high jinks, with iconographical programmes deriving from the Old and New Testaments and from medieval theology, expressed in stone, glass, painting and mosaic.

By contrast, the Catholic parish church of Christ the King (1928–31) is by the American architect Barry Byrne, a former pupil of Frank Lloyd Wright, working with the English-born Cork architect J.R.E. Boyd Barrett. Its nearest relations are in the Midwest of the US, although the stepped silhouette is also reminiscent of P.V. Jensen-Klint’s slightly earlier Grundtvig Church in Copenhagen. Here Byrne’s abstract forms are offset by a giant portal sculpture of Christ, arms outstretched against a background of Expressionist fluting. 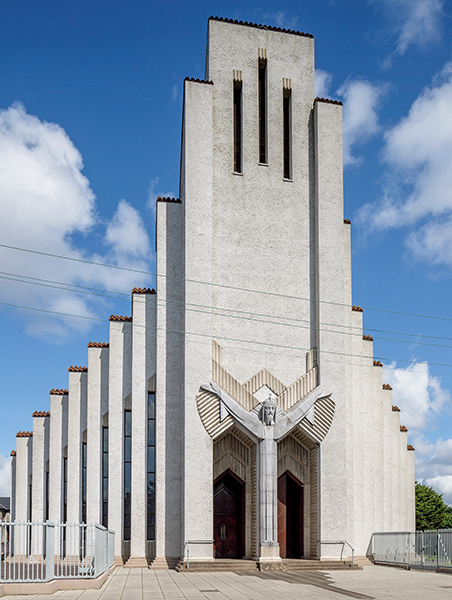 The interior is no less remarkable, both for its broad, uninterrupted plan – made possible by the use of a reinforced concrete structure – and for the placing of the altar unexpectedly close to the congregation. This intimacy was no less exceptional in terms of Irish church architecture, and its implications were not fully explored until the Liturgical Movement and the Second Vatican Council of the 1950s–60s.

The Coast of County Cork 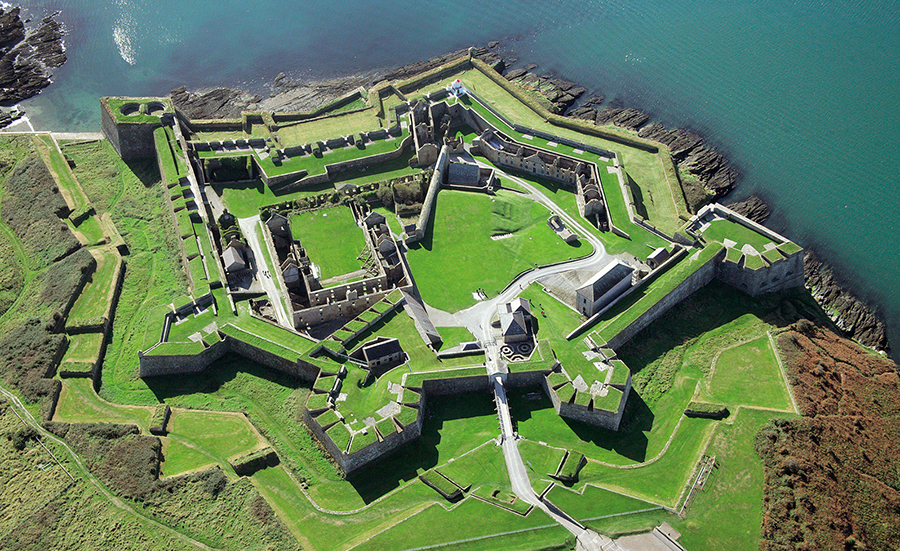 With a rocky indented coastline over a thousand kilometres long, Cork has no shortage of spectacular seaside settings. Forts were built to protect its strategically important ports and harbours, several of which show the influence of advanced Continental practice. At Charles Fort, begun in 1678 on a headland above Kinsale Harbour, William Robertson and his master the Earl of Orrery adopted the faceted bastions and batteries associated with the works of Sebastien de Vauban, chief military engineer to Louis XIV. The defences were tested in 1690 during the Williamite wars, when the Jacobite garrison surrendered after five days’ continuous bombardment by the Protestant forces. 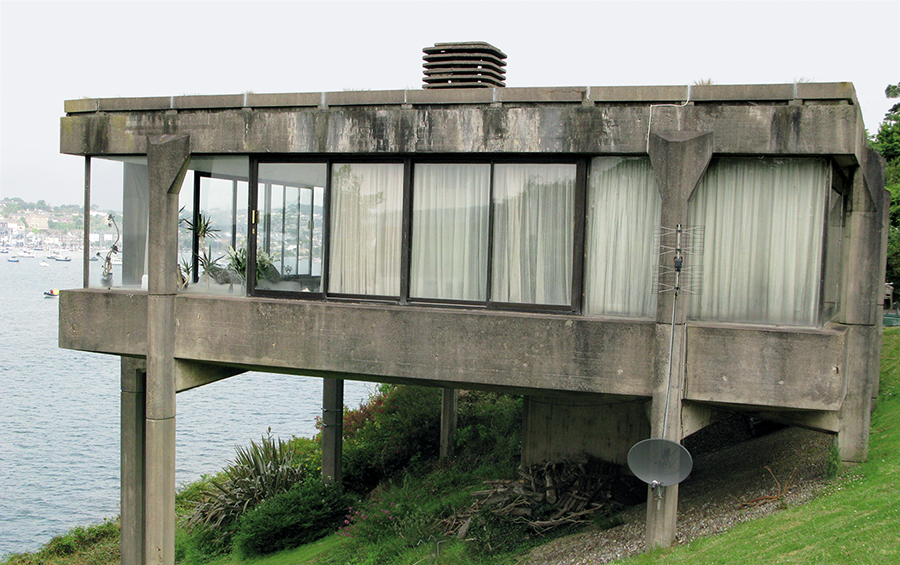 Less than 1 km from Charles Fort on the same coast, Robin Walker’s Weekend House at Rincurran exploits its setting with a show of transparency rather than defensiveness. Built for a bachelor client in 1963–5, the house is a perfect square in plan, with a central core containing bathroom and kitchen. Access is by bridge from the landward side, the house itself standing on piers that are carried up to roof level as expressive elements of the concrete frame. 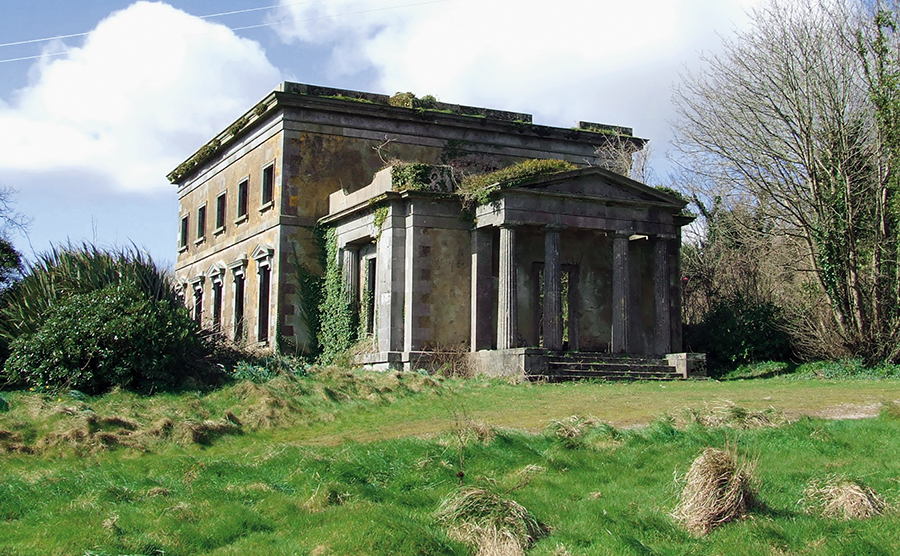 Despite many losses, County Cork remains rich in great houses, which collectively show the sequence of development from castles and tower houses to the familiar hip-roofed and pedimented silhouettes of the Georgian period. Dromdihy House at Killeagh, now reduced to a shell, is by the prolific Dublin architect William Deane Butler (1793/4–1857), here reportedly working with the engineer and sculptor John Edward Jones. Built in 1832–3 for Roger Green Davis, the house is finished in fine Roman cement with sharp-edged limestone dressings, expressed most strikingly in the bold Greek Doric portico. This is placed unusually in the side elevation, to allow the main rooms to benefit from the best southward views towards the distant sea.

By contrast, the splendidly placed Bantry House in West Cork is a composite of several periods, comprising a core of c. 1730 and three phases of 19th century additions. The result is an unforgettable, even eccentric, composition: broadly T-shaped, with a long, south-facing cross-wing centred on a grand library interior. This part of the house was added after 1851 by the 2nd Earl of Bantry, working with an otherwise unrecorded architect named Denis Garvey. Giant Corinthian pilasters subdivide a fourteen-bay façade, of which the outer four-bay sections have three storeys of windows squeezed tightly together – all sufficiently unconventional to suggest that the design may have originated with Lord Bantry himself.

Frank Keohane is an architectural historian and Chartered Building Surveyor based in Dublin.

The Explorer’s Reward: A New Pevsner Guide to Central Leinster

Daniel E. Sutherland’s biography of luminary American artist James McNeill Whistler (1834-1903) is not only the first in…