In this blog, art historian Amelia Rauser places women at the centre of the traditionally “stoic” and “masculine” neoclassical movement. Through the lens of neoclassical dress, she investigates how styling themselves as “living statues” enabled women to exert their own aesthetic agency and participate in important cultural discourses of the Enlightenment.

If you want to learn more about this fascinating topic, The Age of Undress: Art, Fashion, and the Classical Ideal in the 1790s is a breakthrough study on neoclassical dress and its scholarly importance in identifying “fault lines” of innovation and contestation around key issues in the late eighteenth century.

In the spring of 1793, a strange fad swept London: women began to wear belly pads under their dresses. A satirical engraving by James Gillray features a girl in a white round gown and a pad being lectured by her mother or mistress, who thinks she has made what was known in the period as a “faux-pas,”—that is, become pregnant out of wedlock. In fact, the pad itself was sometimes known as a “faux-pas” as noted in the London paper the True Briton: “The pad, alias the faux-pas, is said to have originated with some young Ladies of Fashion. Whatever their age might be, their ideas were perfectly matured”. 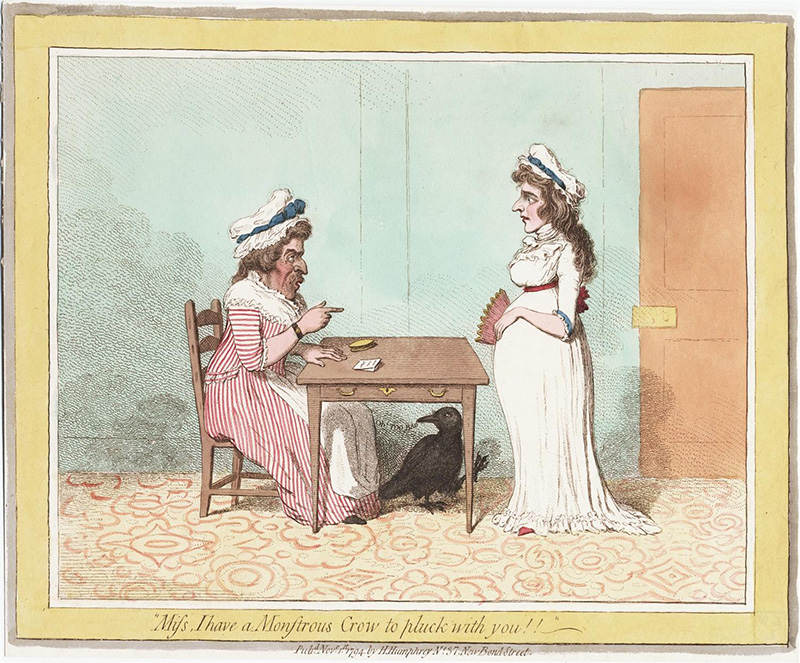 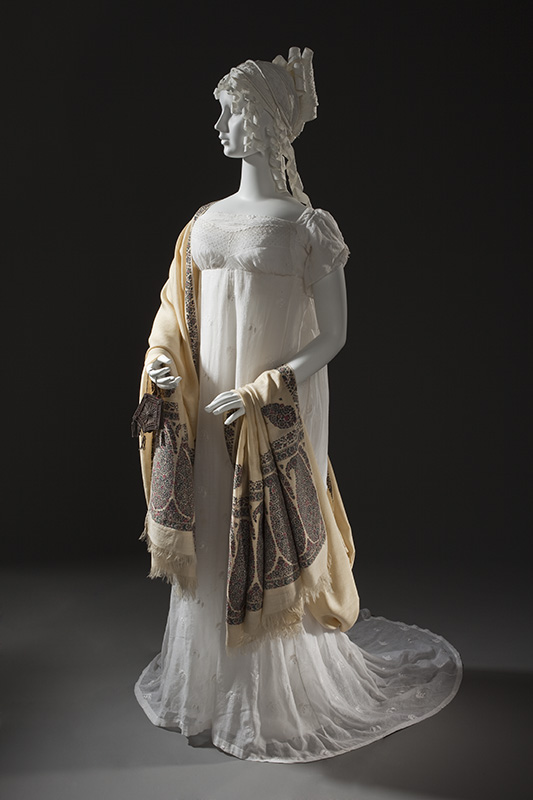 Numerous satires and ballads appeared in the London press lampooning the fashion for a padded belly, but women were not wearing the belly pad to appear pregnant. Rather, they were trying to look like statues. In fact, the 1790s saw elite women appear in metropolitan ballrooms, gardens, and opera boxes across Europe and the United States dressed as living statues. “The most fashionable female dress is now exactly after the antique statues—The flowing drapery, the high zone, and the head compressed as much as possible. The effect is graceful in the extreme,” wrote the Oracle and Public Advertiser in January 1796. The style of dress they wore, often called the robe à la grecque, empire style, or neoclassical dress, was a sheer, white, high-waisted muslin dress worn with minimal undergarments and often accessorised by a cashmere shawl. As it clung to haunches and exposed arms, avoiding most powdering and ornamentation, this new style of dress represented a stark departure from the mantuas and polonaises of the previous decades. Yet it was also short-lived: by the 1820s, corsets, ornaments, silks, and hoops were back in fashion.

What drove this dramatic transformation in women’s dress? In The Age of Undress, far from being a merely whimsical alteration of taste, I argue that the emergence of neoclassical dress was fundamentally intertwined with the aesthetic experiments and philosophical puzzles of artists working in other media in the same period, and deeply connected to contemporary debates regarding the science of life, the understanding of race, and the purpose of art. 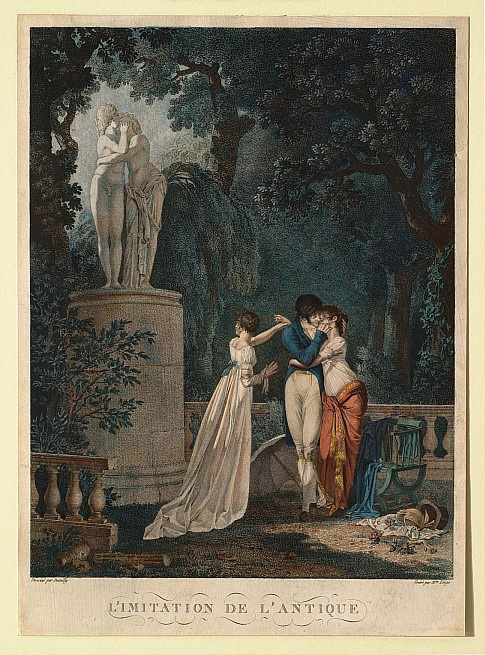 That statues could come to life was an idea that fascinated artists, philosophers, and scientists in the eighteenth century. Women seized on this idea and styled themselves as “modern Galateas”, asserting that their closeness to nature and greater sensitivity to the tactile granted them a privileged access to aesthetic and even moral truth; providing a limited, yet potent, way for women to assert their aesthetic agency. Already characterised as more emotional, more embodied, less rational, and more attuned to the “lower” senses of taste and touch, women were able to assert expertise in these arenas and exercise aesthetic agency as artists and patrons. Women made paintings, wrote poetry, staged performances, patronised art, and dressed and styled their own bodies as ways to intervene and participate in important cultural discourses.

Its emphasis on embodiment meant neoclassical fashionable dress was startlingly naked. Satires such as James Gillray’s Ladies Dress, as it Soon Will Be, 1796, reveal British contemporaries’ ridicule and glee at the degree to which these new fashions exposed the body. Drawing on a visual similarity to the underdress or chemise commonly worn under an outer robe, neoclassical dress seemed to eschew entirely the formal, fashionable layer of costume donned by earlier generations. In the crucible of the Terror in Paris, the chemise underdress also came to signify as aristocratic prison wear: what elite women wore after being stripped of their mantuas and locked into La Force or Les Carmes prison. Thus, to be undressed in neoclassical muslin was not only to be classical, “natural,” and half-naked; it was also, especially in Paris, to have been dangerously vulnerable and to have survived. 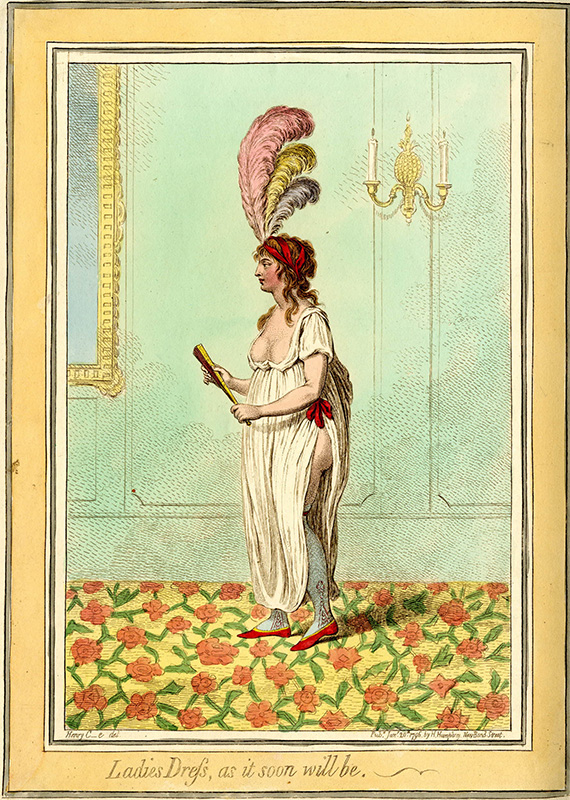 But beyond its unprecedented nudity, neoclassical dress represented a kind of anti-fashion. It swathed the body in an articulation of its limbs, joints, contours, and masses, rather than treating the body as a surface to be decorated. Neoclassical fashion was simpler to craft and to clean, and it appeared to eschew the idea of lavishly upholstering the body in favour of lightly veiling a mobile form. In particular it represented artistic dress—a way of dressing that was explicitly outside fashion and affected superiority in its timelessness and appeal to authenticity, naturalism, and women’s artistic agency. As anti-fashion, neoclassical dress allowed women who embraced it to appear to rise above petty artifice and ornament and construct themselves as aesthetic agents at the centre of key artistic and philosophical discourses of the Enlightenment.

Neoclassicism is often discussed as a cold, masculine, rational, even bureaucratic style. But in fact, the neoclassicism of the 1790s was intensely embodied and deeply emotional, and women were at its centre: as ideals and allegories, as artistic agents, and as important patrons. Marked by a sensual, even ecstatic communion with a deeply strange and primitive classical past, this embodied neoclassicism aimed to use art as a portal through which the harmonious union of art and freedom—both bodily and political—could be brought back to life in a new golden age.

Amelia Rauser is professor of art history at Franklin and Marshall College. Her latest book, The Age of Undress: Art, Fashion, and the Classical Ideal in the 1790s is available to order via the Yale University Press, London website. 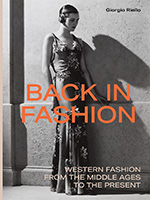 Matisse and Decoration is a new book by John Klein, an internationally acclaimed specialist in the art of…