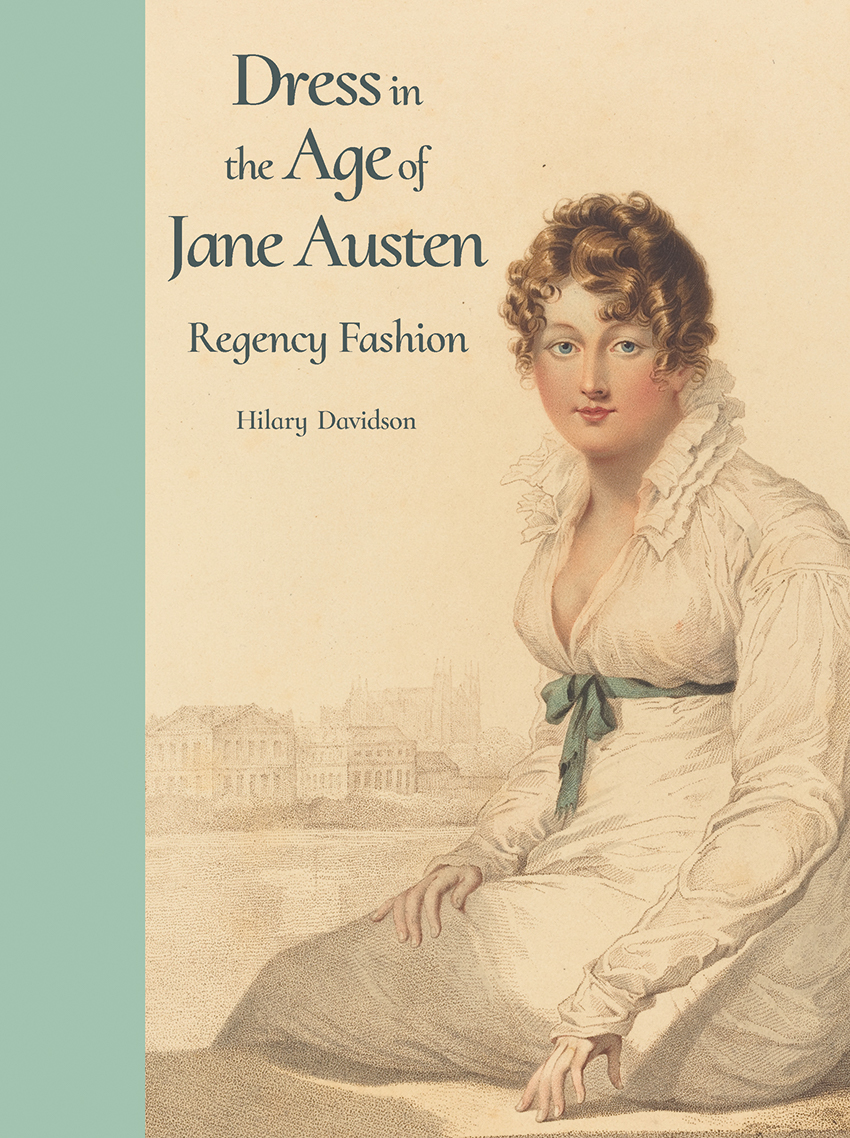 The month of December sees festivities held across the globe, but in 1775 a family in Steventon, England were celebrating for an entirely different reason. On the 16th of December, the seventh child of Revd George Austen and his wife Cassandra Leigh was born. This daughter would grow up to become one of the foremost English novelists of all time. She was, of course, Jane Austen.

In this blog, Yale author Hilary Davidson throws open the doors of the nineteenth-century winter wardrobe; delving into one of the most distinctive eras of British fashion history and providing a tantalising taste of her new book – Dress in the Age of Jane Austen: Regency Fashion. The result is a fascinating glimpse into how the Austen family and their contemporaries would have clothed themselves in order to attend church on Christmas Day, sip their punch at a yuletide ball, or even celebrate Jane’s birthday.

Jane Austen mentions Christmas in all six of her completed novels. The picture that emerges is a warm one, full of time spent with family and friends, stoking ‘a roaring Christmas fire’ against the snow outside, and making merry with dancing, parties, plays, balls, games and general frivolity. In 1806 her niece Fanny described real Austen family festivities with similar glowing evocation:

‘We have all spent a very merry Christmas…We had different amusements every evening. First we had Bullet Pudding, then Snap Dragon. In the evening we dance or play at cards’.

Christmas was a longer season for the Regency gentry and lasted until the 6th of January (Epiphany or Twelfth Night). Christmas Day itself would have begun with a church service, requiring the faithful to bundle up well against the cold outside, and unheated church inside. 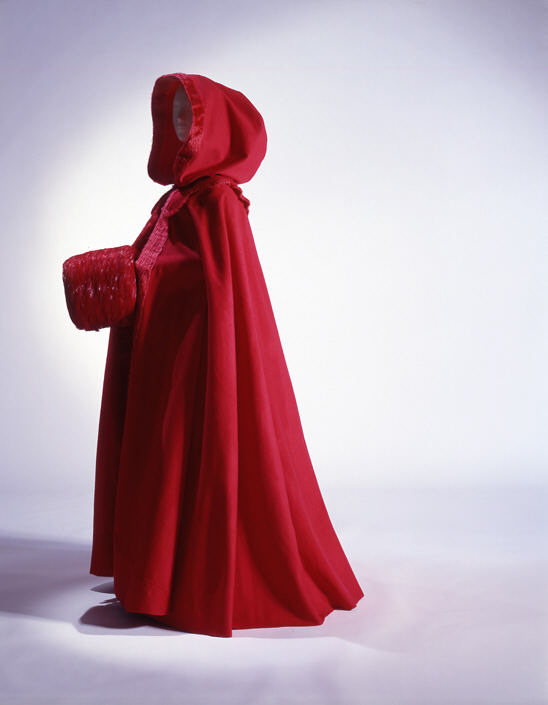 Austen’s milieu had many options for cold-weather clothing. First, they could have fortified their limbs with warm wool flannel underwear. The ubiquitous and ‘contemptible’ (Austen’s description) fabric was made into underbodices and petticoats for women, and drawers and waistcoats (undershirts) for men, of the kind Marianne Dashwood so despises in Sense and Sensibility. Men’s outer clothing was primarily made of wool to begin with, and they added heavy greatcoats with many shoulder capes to ward off inclement weather. Women’s day dresses were often made from ‘stuff’, a fabric made from wool or worsted, gowns of the kind both Jane and Cassandra Austen owned.

Over such stout foundations women could add a pelisse, or long coat-dress, made of more wool and lined or trimmed with fur if one could afford it. A separate fur tippet and muff for warming the hands were other snug options. Over these could further be added a redingote, more like the male greatcoat, and a cloak, perhaps one of the vivid scarlet kind foreign visitors thought so particularly English. A shawl and warm hat could cover any remaining gaps until the wearer was ‘as warm as a dormouse’ in the words of novelist Maria Edgeworth. 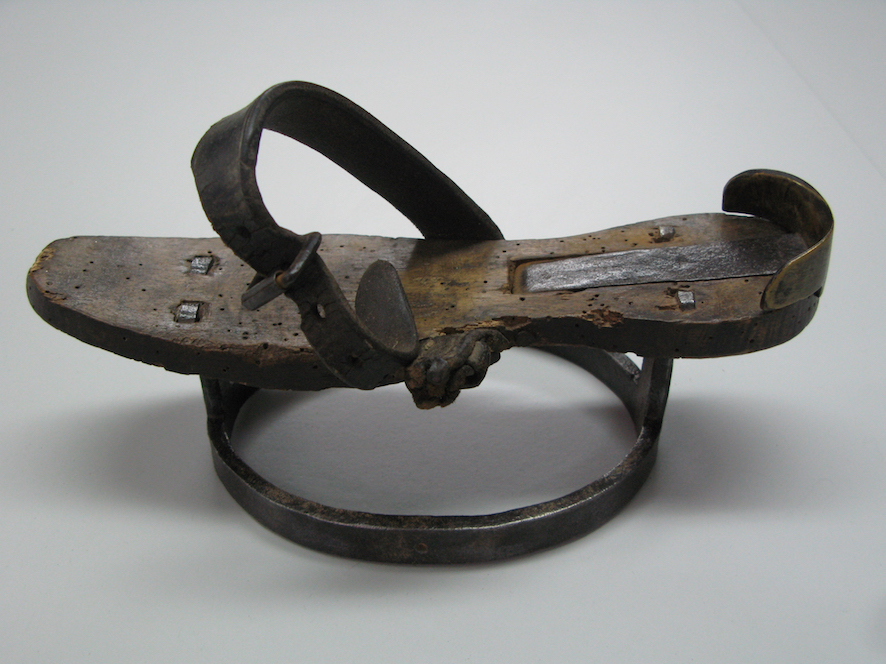 Men could stride confidently onto icy, wet, muddy or snowmelt covered ground between home and church wearing strong boots, a new fashion for everyday wear adopted from riding wear. Women’s half boots were not quite as hardy, and might require a pair of pattens, or wooden overshoes with a raised iron ring underneath to attempt to keep the feet dry. Snow boots of felted wool kept out the worst conditions. On the other hand, perhaps a lady might feel, along with Austen’s heroine Emma Woodhouse, that ‘the sight of a great deal of snow on the ground’ on Christmas morning was an excellent excuse not to go to church at all.

Emma instead looks forward to Christmas for the prospect of the company of her sister Isabella, her brother-in-law John Knightley, and their children filling the house. The biggest distinction in Regency sartorial convention was between ‘undress’ day clothing, and ‘full’ dress, often just called ‘dress’, and this is what Regency gentry would have worn at Christmas festivities. At minimum, one ‘dressed’ for dinner, even with family or friends, as Austen’s heroines frequently do. The distinction was made in women’s dress through lower necklines and better-quality fabrics such as silks, satins and laces. Metallic ornaments and embroideries glinted in flickering candle- or firelight, coming to life in a way electric light now eclipses. White muslin gowns often provided a foil to the glitter of gilt-thread embroidery. Headwear was also more elaborate. The Austen women often used London trips to acquire new ‘dress’ caps. In 1813 a Miss Hare had some pretty ready-made caps in her shop, and Austen bespoke ‘one like one of them, only white satin instead of blue. It will be white satin and lace, and a little white flower perking out of the left ear’.

Men’s dress ensembles comprised dark blue or black coats, white waistcoats, and white or black stockings. They could revert from their newly fashionable trousers back to knee breeches, which were also easier to dance in. Dancing was an excellent social activity and one where women’s lighter clothing was a distinct advantage. Combining a crush of energetic bodies in a room lit by hot candles and open fires meant dancers could be stifling, even in the middle of winter, and fans were essential for cooling the face. Festive punch and other libations made the frolics even warmer. 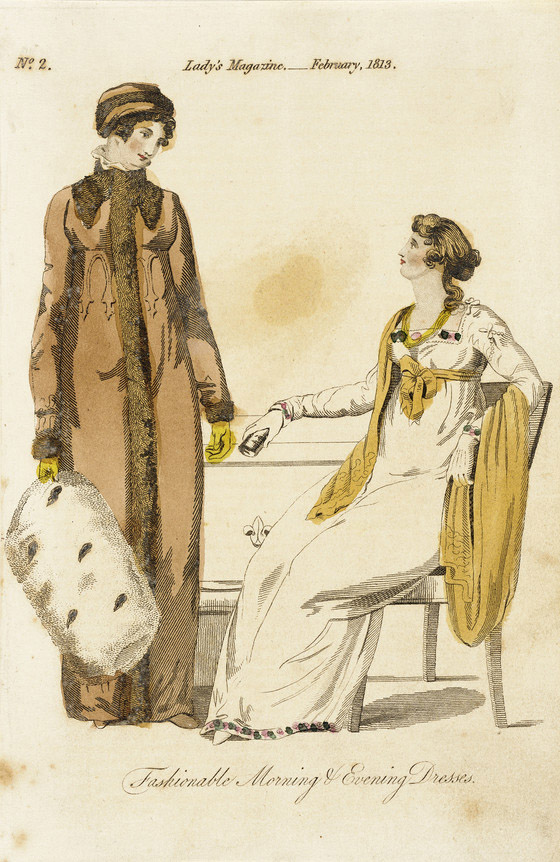 Christmas presents were less common during the Regency, but gifts of charity were extended by the gentry and welcomed by poorer members of society especially in the colder months. In 1798, Austen wrote to Cassandra on Christmas Eve documenting her ‘charities to the poor since I came home… I have given a pair of worsted stockings to Mary Hutchins, Dame Kew, Mary Stevens, and Dame Staples; a shift to Hannah Staples, and a shawl to Betty Dawkins; amounting in all to about half a guinea.’ Warm worsted stockings were long-lasting, and helped keep out the perpetual winter chill.

At the end of November 1812, Austen suggests to her friend Martha Lloyd that Miss Benn might appreciate ‘something of the Shawl kind to wear over her Shoulders within doors in very cold weather might be useful, but it must not be very handsome or she would not use it. Her long Fur tippet is almost worn out.’ Charity and the sharing of bounty with the less fortunate was an appropriately pious response to the season. Thus did clothing help warm the bodies, hearts and souls of Christmas celebrators in the age of Jane Austen.

Hilary Davidson is a dress and textile historian based between Britain and Australia, and an Honorary Associate at the University of Sydney. She has curated, lectured, broadcast and published extensively in her field.

Click here to find out more about her latest book, Dress in the Age of Jane Austen: Regency Fashion. 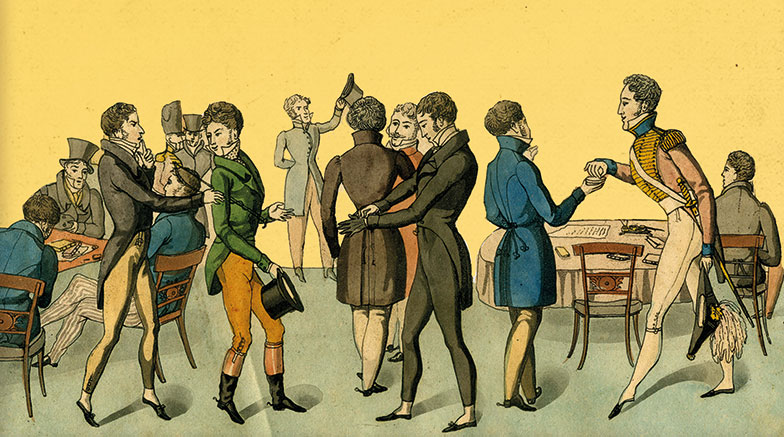 Do You Have a Passion for Fashion History?