What did the crusades ever do for us? This clash of medieval civilizations is defined by warfare, but over the course of its two hundred year history also became a period of cultural exchange.

Roger Crowley, historian and author of Accursed Tower: The Crusaders’ Last Battle for the Holy Land, takes a trip to Acre and walks us through why this Mediterranean city was so important for medieval Europe.

When we consider the crusades, we think about the irreconcilable clash of two civilizations. Last year I made a trip to the town of Acre—Akko in Hebrew—on the coast of Northern Israel. I was looking for information about warfare, medieval fortifications, and military manoeuvres, but in the process I also glimpsed a second strand to Europe’s two-hundred-year venture into the Middle East.

This was sparked by the archaeologist I’d arranged to meet explaining to me that, much to the displeasure of the pope, Acre used to mint its own Islamic gold coins, complete with suitable Arabic inscriptions so that it could trade with its Muslim neighbours. Beneath the surface of war, the crusader footholds were energetically interacting with their Islamic neighbours, exchanging goods, acquiring culinary tastes, cultural ideas, and technologies.

The archaeologist also mentioned that the Knights of St. John had a sugar mill a few miles outside the city. This sent me off into the hills of Galilee to seek it out. Somehow the directions went astray and I never found it, but the point was made. Sugar production that had been introduced into the Middle East then made its way into Europe during the crusades via the Islamic world. The same was true of high-class glass manufacture. The fine sand of the bay that runs from Acre to Haifa had provided the raw material—along with soda ash from the Syrian desert—for glass making since the time of the Phoenicians. The Christians in Acre and other cities up and down the coast learned the technology from its Islamic neighbours. Glass was made in Christian Acre, and from there new techniques of high-quality glass production passed into Europe. The people of Acre also learned something about hygiene too. When the Arab traveller Ibn Jubayr came to Acre in 1192, he thought the place a pigsty. He wrote that the place “stinks and is filthy, being full of refuse and excrement.” In time the incomers came to see the value of bath houses and improved sanitation: the Knights of St. John had a highly sophisticated sewerage system in their large fortress complex.

The crusades brought Europe into contact with a superior civilization, from which it was the beneficiary. The real long-term damage done to the Islamic world by the crusades was economic rather than military. Over centuries many of the industries that had made the Levant so wealthy—the manufacture of soap, glass, silk, and paper, the production of sugar—were copied by the Europeans and exported to the West. The crusader experience sharpened Europe’s sense of material desire and facilitated the long-range exchange of goods that satisfied it, via the ships of the Italian maritime republics. These were the central cogs that meshed two economic systems—Europe and the Orient—shunting goods across hemispheres, facilitating new tastes and notions of choice. Venetian merchants moved from buying Syrian glass to importing soda ash until the superior glass of Murano was being re-exported to Mamluk palaces and lamps made in Venice hung in the mosques of Aleppo. Soap and paper-making followed the same trend. Sugar production moved from Syria to Cyprus, where Venetian entrepreneurs employed more efficient production processes to supply Western markets. The merchant galleys allowed innovative European industries harnessing new technologies, such as water power and automatic spinning wheels, to undercut Levantine competitors and nudge them into spiralling decline. Every shipload that sailed east from Venice gradually shifted the balance of power. The crusades promoted the seepage of oriental tastes, ideas, and influences—as well as a certain romantic Orientalism—into the West.

The crusades also amplified Europeans’ ideas of the world. There was certainly culture shock for pilgrims arriving at Acre or Jaffa on their way to Jerusalem during the crusades and well afterward. In the process they saw how other people lived and occasionally had their horizons widened. The pilgrim experience could be said to form the basis of European travel writing—first as “how to” manuals for overcoming the varied challenges along the way and guide books to the holy places—then as vivid accounts of wonder at the varied landscapes, customs, and peoples that they encountered. The cheerful and boundlessly curious German monk Felix Fabri, who made two journeys to the Holy Land and beyond in the fifteenth century, could only marvel at what he saw. He was struck with amazement and delight at “the immensity of the [Sinai] desert, its barrenness and its terror.” Travelling on to Cairo he then sailed up the fertile Nile “as if we sailed through paradise,” though at night he could not sleep for the crocodiles bumping against the small boat. “I have seen the world in a twofold mirror,” Fabri wrote toward the end of his life. Such experiences were doors that had been opened by the crusades.

Roger Crowley is a British historian and author. His four highly-acclaimed previous books include Constantinople (Faber, 2005) and New York Times bestseller, Empires of the Sea (Faber, 2011).

Read more on the crusades and medieval history on our blog. 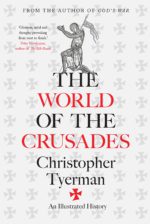 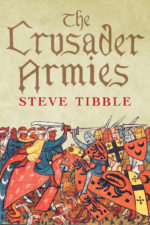 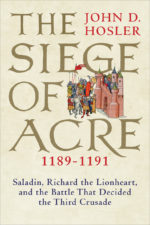 Yale are very proud to publish the Jewish Lives series, a collection of biographies that focus on prominent and influential figures in the…