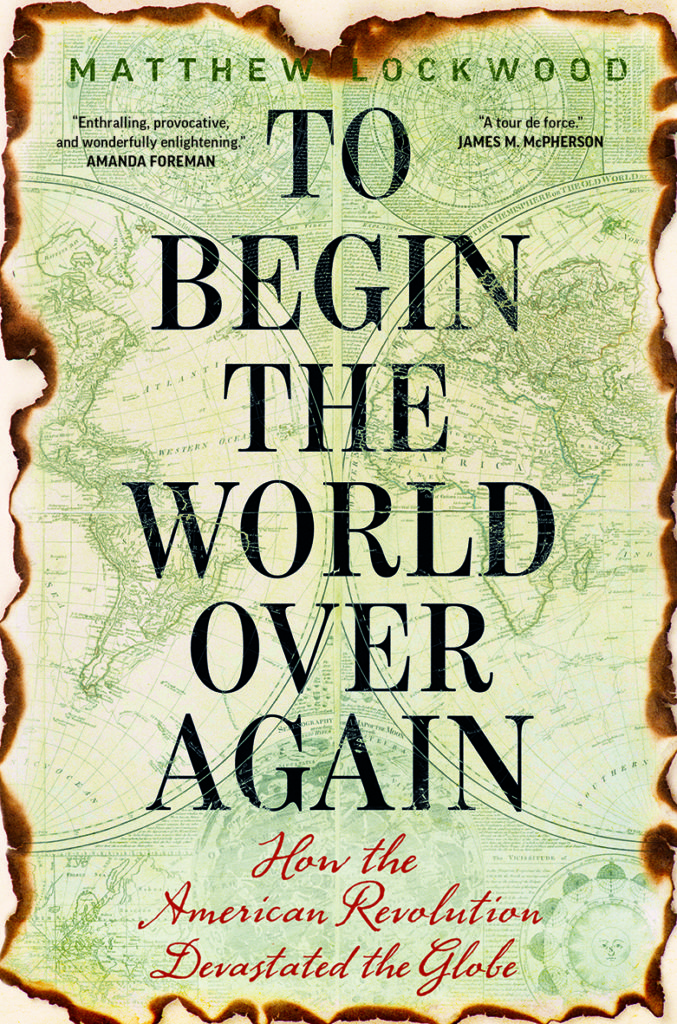 The imperial American Revolution altered forever the lives of everyday people, ravaging communities and sending thousands of individuals to new homes in distant lands, to opportunity, to ruin, to prison, and to the gallows. While one set of people struggled to free themselves from the bonds of empire, others, like those described below, found themselves bound, incarcerated, and exiled, struggling to survive in the world the revolution created. Matthew Lockwood’s new book, To Begin the World Over Again, tells their stories.

Four of these stories—those of Eliza Fay, Micaela Bastidas, Dean Mahomet and Yemmerrawannie—are detailed here in this extract from the book.

In 1779, after a month-long journey across Europe, through the Mediterranean Sea, across the Sinai Desert, and down the Red Sea, after weeks on a crowded ship in the storm-tossed Indian Ocean, Eliza Fay arrived on the sun-kissed shore of Malabar in south India. The tropical tranquility that greeted Eliza and her husband Anthony after their trying ordeal was, however, a mirage. With war spreading from the Atlantic to the subcontinent, the British embassy had ﬂed, leaving Eliza and Anthony at the mercy of William Ayers, an English convict and one-time soldier now employed by the ferociously anti-British Sultan of Mysore. As Ayers escorted the pair to prison, Eliza Fay must have wondered just how she had come to such a pass. In the years to come, tens of thousands of captives and refugees—Muslims, Hindus, and Indian Christians as well as countless British, French, and Indian soldiers—would ask themselves similar questions. The answer lay not in Malabar, but in an unexpected source: the American Revolution. 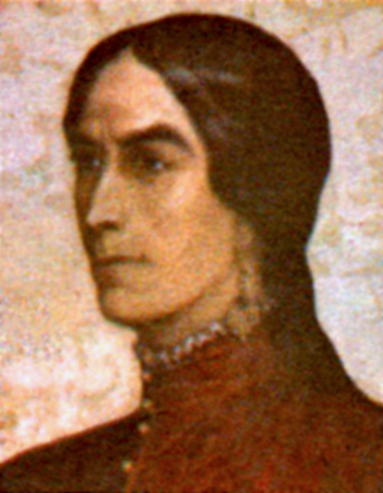 On May 18, 1781, Micaela Bastidas stood in the square in Cuzco in a pool of her own sons’ blood defiantly awaiting her fate. Her rebellion against the Spanish Empire had failed and so now, as her husband Tupac Amaru II, co-leader of the uprising, looked on in horror, it was her turn to face the executioner. At least she would be spared the awful sight of what the Spanish had planned for her husband. After her death he would be pulled apart by horses, then quartered and beheaded, his limbs sent across Peru as symbols of Spanish vengeance. With her death, and the death of her husband, an indigenous rebellion would end, but a spark had been lit and a pair of martyrs had been born. Their fates too were rooted in the struggle for American independence.

In 1810, Britain’s ﬁrst Indian restaurant, the Hindoostane Coffee House, opened its doors in George Street in London. Entering the establishment, patrons might well have thought themselves transported to the Orient itself. Reclining on bamboo-cane sofas, guests gazed upon walls covered with rich paintings of Indian landscapes and scenes of Indian life. As the aroma of curries and seasoned rice wafted in from the kitchen, the scent of Indian herbs and spices mixing with the fragrant tobacco of the ornate hookahs lining the ﬂoor of the smoking room, ‘India gentlemen’, Britons who had lived and worked in India, must have harkened back to their previous lives half a world away. 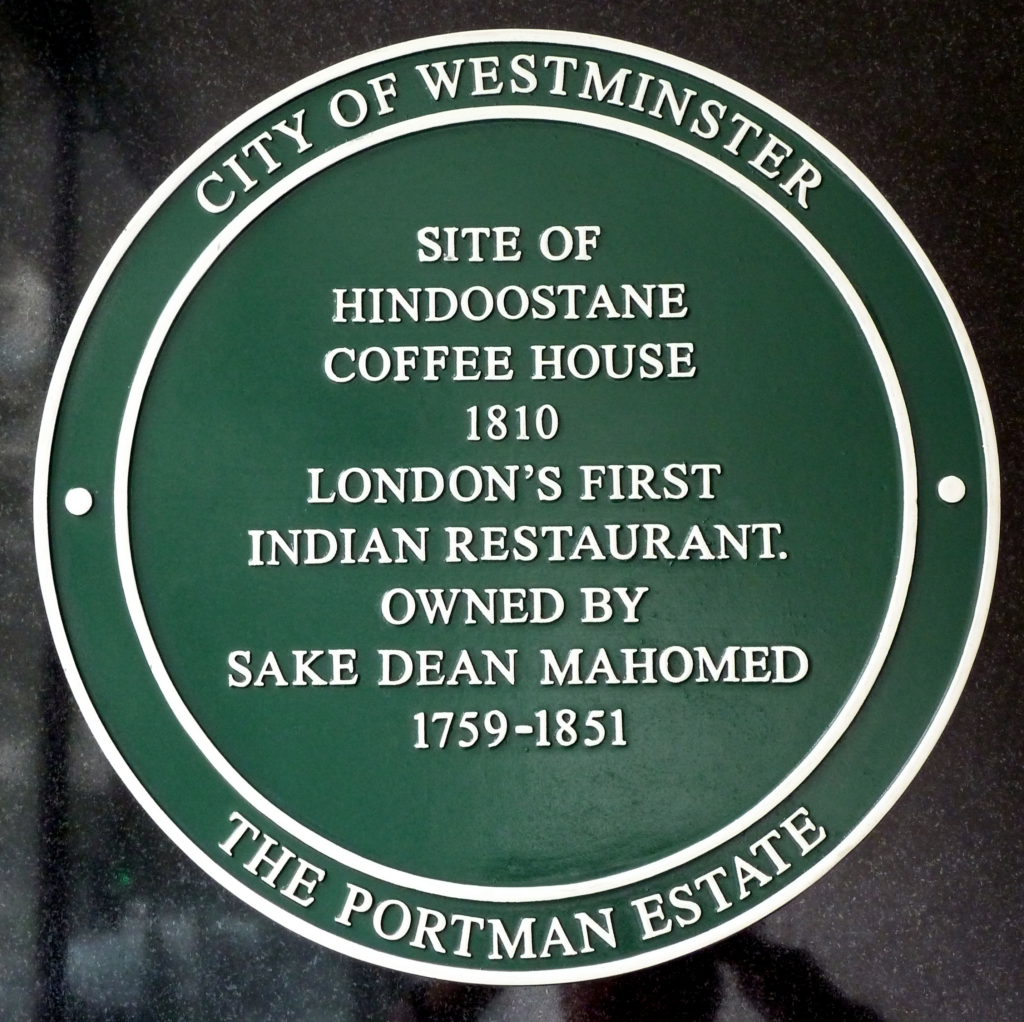 With Britain’s ever-expanding empire and its growing involvement in the affairs of the subcontinent, it was perhaps no surprise that such an establishment might grace the crowded streets of the imperial capital. Its proprietor, however, was no British nabob newly returned from plundering the crumbling empires of the east, no British soldier hoping to recreate the sights, smells, and tastes of his formative years, no British merchant hoping to expand his interests from shipping spices to cooking with them. Instead, as an advertisement in The Times made clear, the restaurant was owned and operated by Dean Mahomet, a Muslim Bengali soldier from Patna and his Irish Protestant wife. The more literary among the advertisement’s readers may well have recognized the proprietor’s name. Nearly two decades earlier, the very same Dean Mahomet had been involved in another ﬁrst, becoming the ﬁrst Indian to publish in English when his Travels were released in 1793. How did Mahomet come to ﬁnd himself opening England’s ﬁrst curry house, publishing the ﬁrst English-language book by an Indian, and marrying the daughter of an Irish Protestant? Once more the War for American Independence had intervened.

Nearly two centuries later, on a cold January day in 1988, two men stood in solemn ceremony over a grave in the churchyard of St. John’s church in Eltham in south-east London. One of the men standing before the headstone was the parish priest, whose predecessor had conducted the burial service nearly two hundred years before. The other had come much further to stand in the winter chill contemplating events now centuries old. His name was Burnum Burnum, an athlete, actor, and activist of Wurundjeri people, and he had made the pilgrimage from his native Australia to retrieve a body and right an injustice. A few days earlier, to mark the bicentennial of Britain’s ﬁrst colonization of Australia, he had planted a ﬂag on the white cliffs of Dover and issued a proclamation full of biting, tragic humor. In mocking parallel of British actions in 1788, Burnum Burnum announced that he was claiming Britain on behalf of Aboriginal people and that though Britons would henceforth see Aboriginal ﬁgures on their money and stamps “to signify our sovereignty over this Domain,” he could promise that “we do not intend to souvenir, pickle, and preserve the heads of 2,000 of your people or to publically display the skeletal remains of Your Royal Highness” as the British themselves had done. 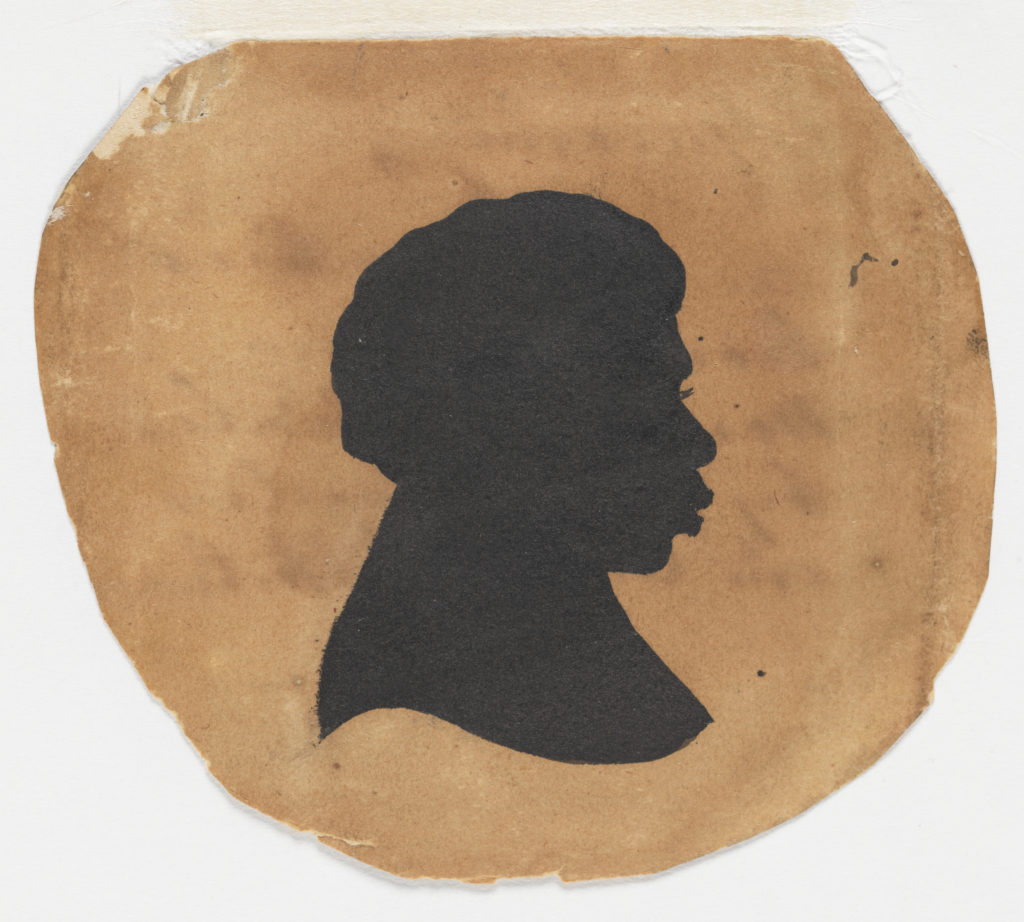 Silhouette of Yemmerawanie c1793. From the collections of Mitchell Library, State Library of New South Wales

But now, as he stood before the resting place of a fellow native Australian, his righteous humor was gone, replaced by sadness tinged with indignation. On the simple headstone were inscribed the barest of facts about the young man it memorialized: “In memory of Yemmerawanyea a Native of New South Wales who died the 18th of May 1794 in the 19th year of his age.” Newspapers at the time gave little more detail. The Morning Post reported that “one of the two natives of Botany Bay, who came over with Governor Phillip, is dead: his companion pines much for his loss.” It was Burnum Burnum and many of his countrymen’s hope that two hundred years after the British ﬁrst began their penal colony at Botany Bay, the body of Yemmerrawannie might at last be returned to his native shores. But there would be no symbolic homecoming for Yemmerrawannie, no peaceful rest, no symbolic righting of colonial wrongs, for unbeknownst to priest and activist alike, by 1988 there were no bones beneath the headstone in Eltham churchyard. Yemmerrawannie’s body had been lost. How had this young man of the Eora people come to be buried in a churchyard in suburban London, a symbol of Britain’s imperial sins? Here too, the roots of this modern tragedy lay not just in the Paciﬁc, or even in London, but in the aftershocks of the American Revolution.

Most previous accounts of the American Revolution have by and large restricted their attention to the thirteen colonies that declared independence from Great Britain in 1776. In so doing they have limited their focus to the stone that caused the splash rather than the waves and ripples that radiated out from its epicenter, the quick, sharp, shock rather than the enduring reverberations. This stubbornly national focus has largely obscured the wider ramiﬁcations of America’s struggle for independence. Stories like those of Micaela Bastidas, Dean Mahomet, and Yemmerrawannie provide a unique window onto a world at war and the new world that war created. These stories are no less important to the story of the American Revolution, no less a part of its history, but they are largely forgotten, disconnected from the more stirring, glorious, triumphant tales of Washington and Jefferson, Bunker Hill and Yorktown.

The American Revolution certainly remade the world, but not simply through its ideals. In most accounts of the American Revolution, battleﬁelds and debate halls, noble generals and enlightened politicians crowd the scene, providing a veneer of haloed respectability to what was in reality a nasty, bloody, confused and chaotic era. However, in the shadows of these well-worn settings and familiar ﬁgures, ordinary people had their worlds turned upside down. The violence of this imperial civil war—which stretched from kings and congressmen to paupers and felons, from Boston and Philadelphia to London, Calcutta, and Botany Bay—was one of the deﬁning features and most important legacies of the global American Revolution. To Begin the World Over Again tells these forgotten personal stories for the ﬁrst time, demonstrating how the individual and the institutional, the local and the global, were irrevocably inter-twined. The geopolitical and economic aftermath of the American Revolution is well known, if passionately argued over and deeply contentious. The wartime experience of the wealthy, the well-educated and well-heeled is often discussed and easily illustrated in the countless diaries, books, newspapers, and letters that proliferated in the ﬁnal decades of the eighteenth century. The voices of the poor, the struggles and triumphs of the common man and woman are, as always, nearly silent. But they can be heard, if faintly, through a close and careful reading of the archives. Here, accounts reveal the sheer scale of the consequences of war across the world.

Extract taken from the introduction to To Begin the World Over Again: How the American Revolution Devastated the Globe, published by Yale University Press, September 2019.

Matthew Lockwood is an assistant professor of history at the University of Alabama and the author of The Conquest of Death: Violence and the Birth of the Modern English State.

Click here to learn more about his latest book To Begin the World Over Again: How the American Revolution Devastated the Globe. 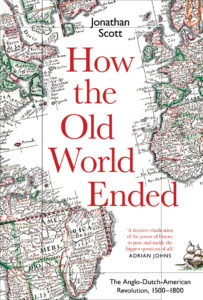 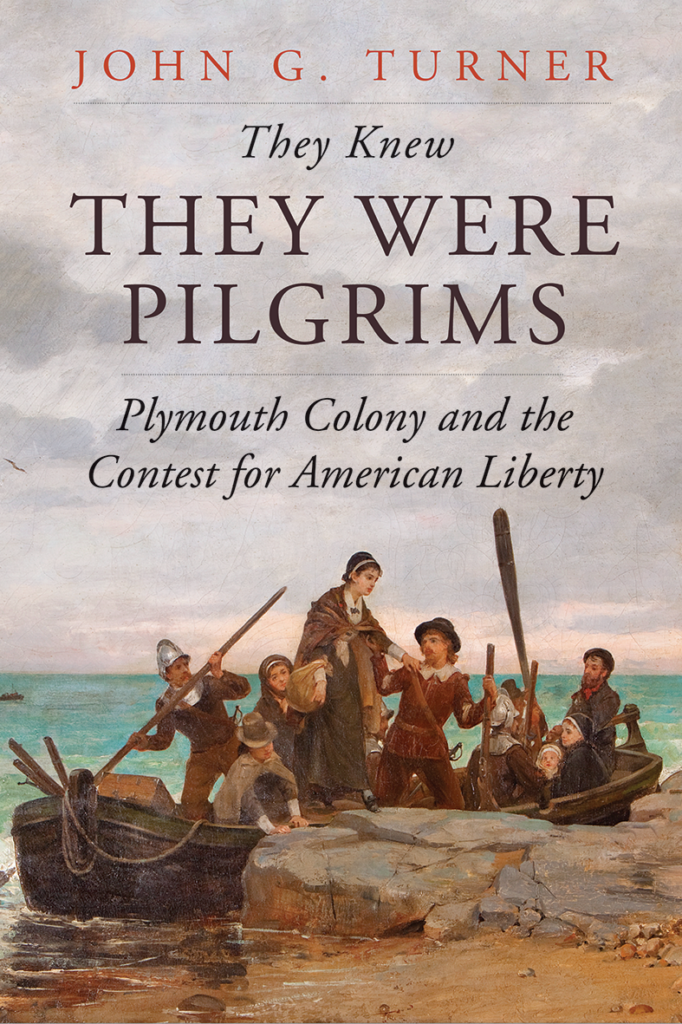 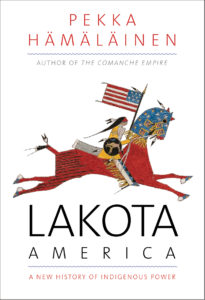 ‘They claimed the hint of mud added to the liquid’s vital properties.’ Throughout this month, Lee Jackson reveals…