When last summer John Henderson published Florence Under Siege: Surviving Plague in an Early Modern City, he little realized how relevant his book would become within the context of the current COVID-19 pandemic. Many of the themes he examines for the seventeenth century are echoed in the present war against disease, from policies of containment, mitigation and quarantine to the reactions of individuals confined to their houses.

While each age faces the challenge of new diseases, from cholera, AIDS, Ebola to the Coronavirus, plague remains the paradigm against which reactions to epidemics are often judged. Early modern Italy, famous as the birthplace of the Renaissance, has long been portrayed as having first developed public health policies which have formed the basis of models developed in later centuries.

Florence Under Siege examines the capital city of Tuscan within a wider Italian and European context to assess the effect and real impact of these policies on the city, the neighbourhood, street and family. Writing in a vivid and approachable way, this book unearths the forgotten stories of doctors and administrators struggling to cope with the sick and dying, and the impact of plague on individuals and families through the personal diaries of the literate to the verbatim testimony in court cases of the poorer levels of society.

Many histories of public health concentrate on chronicling government policies, whereas here equal emphasis is placed on the lived experience. Underpinning this narrative is a vivid recreation of the stories and experiences of individuals who endured and survived the epidemic. Contemporary political and medical rhetoric often blamed disproportionately the lower levels of society as the spreaders and even cause of plague, but official measures are examined to establish their real impact on the whole population. Belief that plague was caused by corrupt, diseased air which spread through the city and was then was inhaled by the population lay at the basis of medical understanding of the invisible enemy and public health policies adopted by governments. These included preventative strategies of a cordon sanitaire of armed soldiers along the frontiers of the Tuscan state to environmental surveys to ameliorate the living conditions of the poor to the detailed inspection and locking up of infected houses. 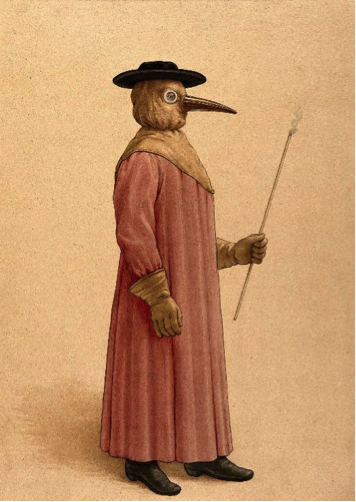 Medicine and Plague: The ‘Invisible Enemy’

Once plague had arrived in the city and people began to fall ill, doctors adopted a wide range of treatments from the ‘miraculous’ drug of Theriac, which included the venom of vipers, to the surgeons’ lancing of buboes to the complex recipes devised by empirics. Then, as now, contemporaries recorded and marvelled at the heroic and vital role of medical and support staff, who fought an ever-ending battle against the epidemic. These included not just the physicians and surgeons, but also the host of people who inspected suspect houses, carried the sick to isolation hospital or the dead for burial. In Florence, central to this process was the voluntary religious fraternity of the Misericordia, whose work is recorded in the picture by Baccio del Bianco on the cover of the book.

Lazaretti or vast isolation hospitals served to distinguish many Italian cities from their northern European counterparts. In Renaissance Italy some cities built new structures, but many took over existing buildings. In Florence the city’s major Lazaretto was the beautiful Romanesque convent and church of San Miniato al Monte on the hill overlooking the city to the south of the river Arno. Together with the other Lazaretti around the city, San Miniato housed and treated over 10,000 people during the epidemic of 1630 to 1631, but did, as was claimed at the time, they lead to a reduction in mortality? or simply provide a convenient way for the poor to be enclosed? A vivid reconstruction of the physical environment and the daily life in these institutions provides a moving account of the tribulations and heroism of medical, spiritual and support staff as they battled against plague. 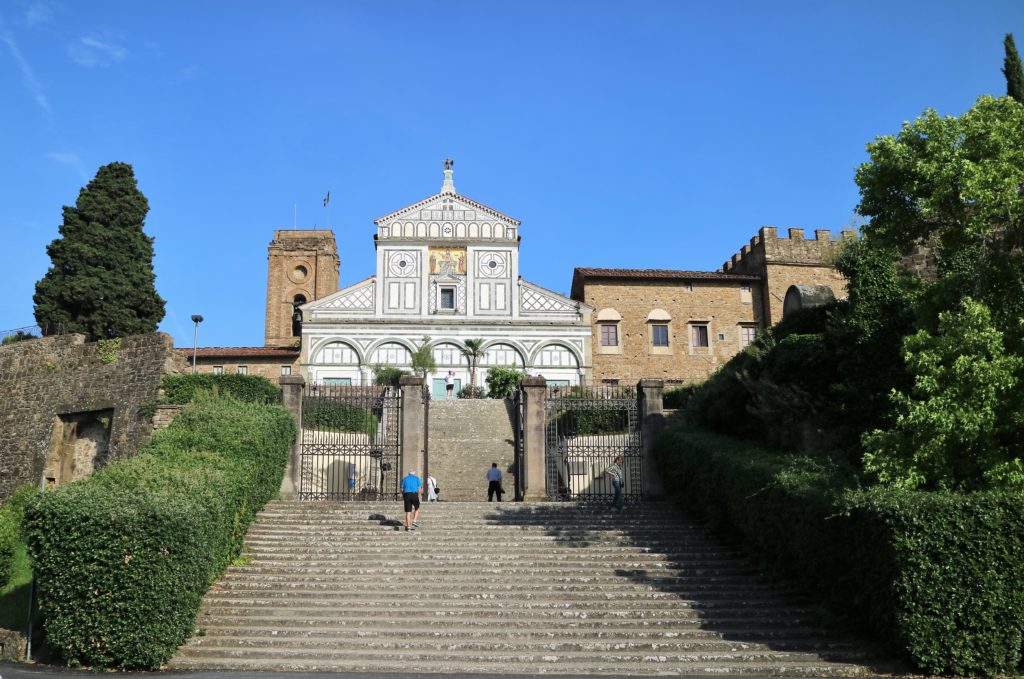 Façade of the Church of S. Miniato al Monte, the Benedictine abbey, which became the main Lazaretto in Florence. It was sited on top of the hill to the south of the city, thus providing isolation and fresh air, dispersing the corrupt air of disease. (author photo).

Religion played a central strategy in the fight against plague, reflecting contemporary belief in the necessity to placate divine ire at the sins of Mankind, through prayers and public masses. Elaborate processions with holy relics were an integral part of the ceremonial response. The church and city harnessed the power of the role of not just major plague saints, such as St. Sebastian and San Rocco, but also of local spiritual patrons, such as the fifteenth-century archbishop St. Antoninus. But how did the city cope with the potential danger of the perceived threat of the spread of disease when large numbers collected together? The plague in Florence also led to the commissioning of major works of art and architecture from a wide range of patrons from the Medici Grand-ducal family to the less affluent. Adopting a truly inter-disciplinary approach, this study examines the role of the chapels, altarpieces, and silver and wax votive offerings in the fight against plague. 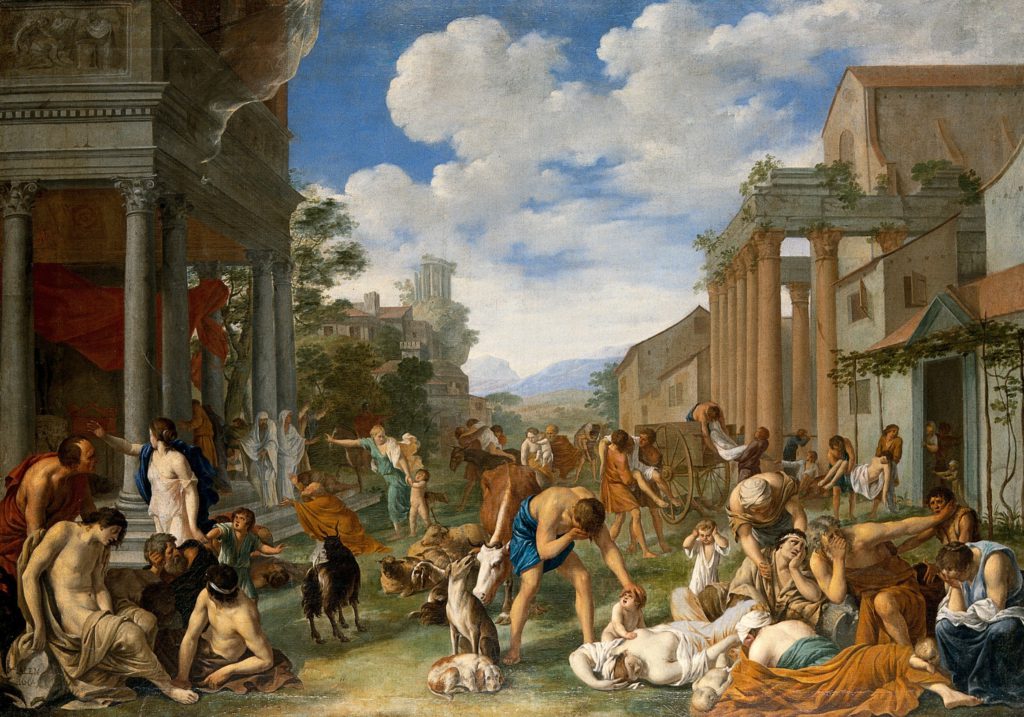 Pieter van Halen, ‘The Plague of the Philistines at Ashdod’ (1661), (Credit: Wellcome Collection  Attribution 4.0 International (CC BY 4.0)), which treats the same theme as Nicholas Poussin’s picture of 1630 of the same title. Though this presents a classicizing treatment of a Biblical theme of the divine punishment of the Philistines, contemporaries in the seventeenth century believed that plague was caused by God’s anger at the sins of Mankind. The presence of plague is reflected in the gestures of many of the people, others who held their hands over their noses and mouths to avoid the inhalation of the infected miasma of disease, and the dying mother and child. To the right can be seen a cart being loaded with dead bodies wrapped in shrouds to be taken for burial.

Florence Under Siege seeks above all to look behind the optimistic gloss of official printed accounts to examine individual experiences. It recreates the often moving and tragic narratives of the individuals who ran isolation hospitals, the doctors who treated plague victims, and above all of the ordinary men and women left bereft and confused by the sickness and death of family members.

Analysis of the large corpus of contemporary court records provides fascinating evidence of the numerous survival strategies through which individuals coped with the very real fear generated by a city under siege from an invisible enemy and how they attempted to side-step regulations in order to preserve their possessions and their normal way of life. Examination of detailed trials reveals not just the extraordinary variety of ‘crimes’, but also reveals greater compassion than suggested by the draconian punishments prescribed in law and thus helps to break down the traditional picture of the opposition of rich and poor, the governors and governed. 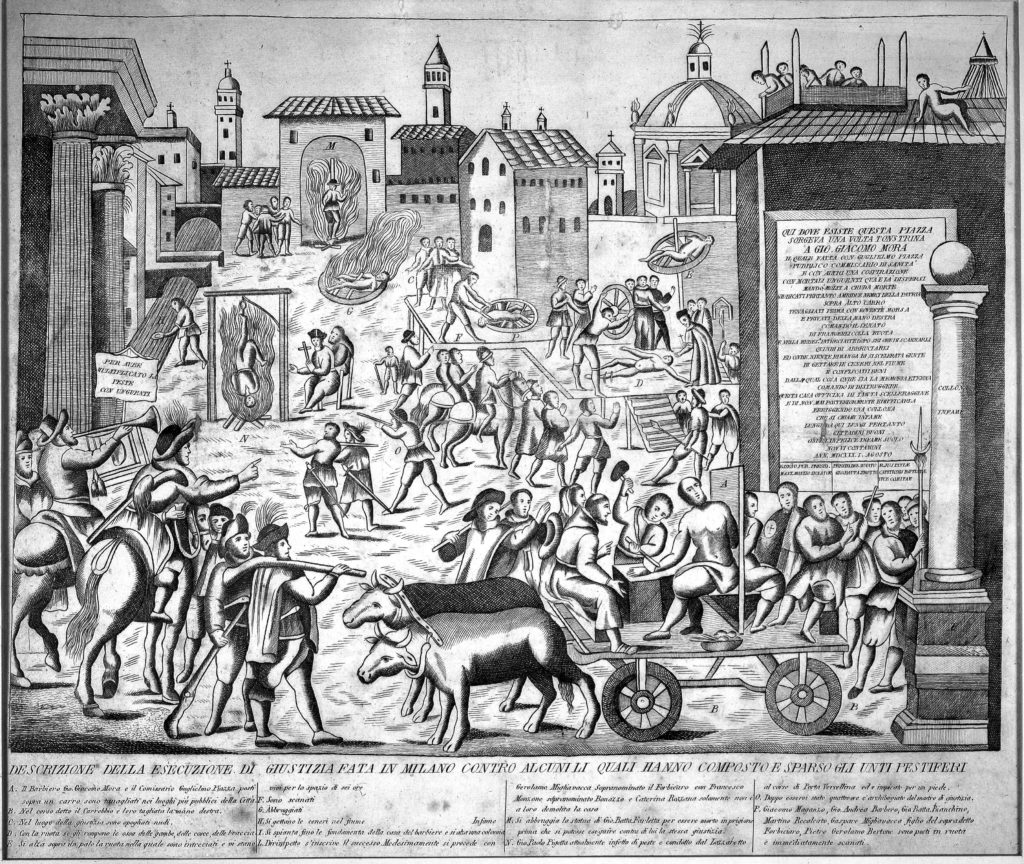 Anon (Orazio Colombo), ‘Punishment and Execution of Untori or Plague-spreaders in Milan’ (1630), after the engraving by ‘Bassano’ or ‘Francesco Vallato’ (Credit: Wellcome Collection. Attribution 4.0 International (CC BY 4.0)). The print shows a wide variety of gruesome punishments administered in Milan to those men and women accused of spreading plague through smearing the walls of the city with poisonous unguents.

John Henderson, Professor of Italian Renaissance History, Birkbeck, University of London, and Emeritus Fellow, Wolfson College, University of Cambridge, is one of the leading social and medical historians of renaissance and early modern Italy, and is the author of a series of books, edited volumes and articles on renaissance Tuscany. With Yale he has published The Renaissance Hospital (2006) and (with Jon Arrizabalaga and Roger French) The Great Pox (1997) and most recently Plague and the City, edited, with Lukas Engelmann and Christos Lynteris (Routledge, 2018).

Florence Under Siege: Surviving Plague in an Early Modern City

“John Henderson’s analysis of the context and quality of local government in an early modern Italian city stands out as a major work of historical scholarship”—Anne Hardy, Times Literary Supplement

November’s Bookshop of the Month – The Borzoi Bookshop, Stow-on-the-Wold

This month, we’re off to the Cotswolds and the wonderful Borzoi Bookshop. Established in Stow-on-the-Wold in the late…