The fifth publication in the Buildings of Ireland series, Central Leinster: Kildare, Laois and Offaly explores a broad range of architectural gems in the heart of Ireland,  from castles and churches to grand neoclassical country houses.

In this article, author Andrew Tierney describes the impact of the Tudor Conquest on Ireland’s towns, the Gothic Revival movement with its origins in County Kildare, the importance of archaeological inspiration, and the emergence of Arts and Crafts sensibilities – illustrated by the work of James Franklin Fuller.

The Explorer’s Reward: A New Pevsner Guide to Central Leinster

No point in Central Leinster is further than a two hour drive from Dublin, and the major historic transport arteries of river, canal, train and motorway reach deep into its plains, bogs, and hills. For the most part, the destination of travellers through these counties has been westward – to Limerick, Cork and Galway. But there is much reward for those who take the time to stop and explore. 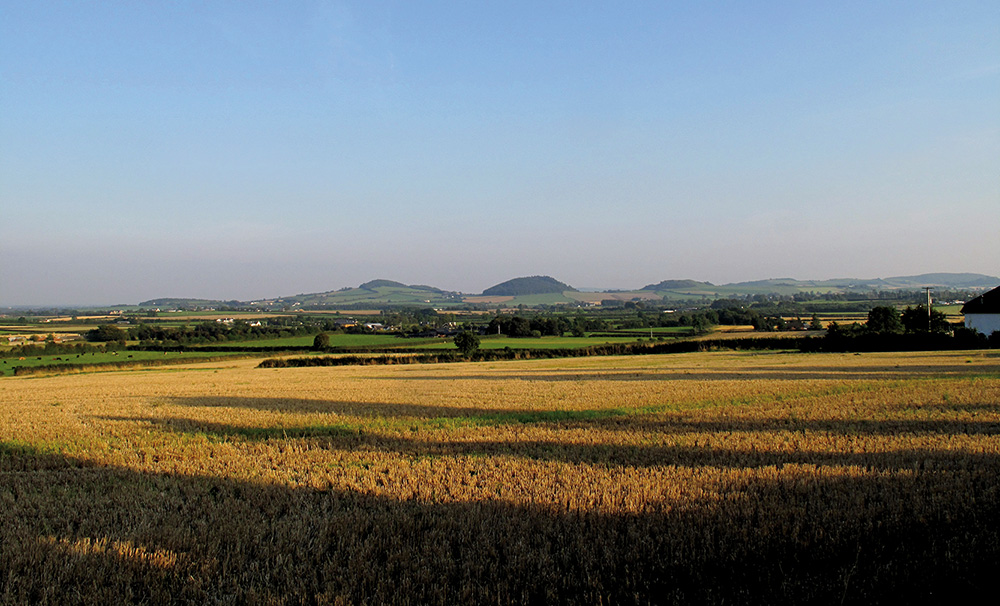 Central Leinster was at the forefront of the Tudor ‘recolonisation’ of Ireland. This took place from the second half of the sixteenth century and was launched from Kildare, then part of the English buffer zone around Dublin known as the Pale, into what were to be the newly shired King’s and Queen’s counties (Offaly and Laois respectively).

In the wake of the Tudor Conquest and in the centuries that followed, the past, potent and political, constantly threatened to resurface. Early county towns were punctuated with fortresses and surrounded by the castles of natives and settlers, where tension was high and the threat of conflict pervaded.

It is perhaps unsurprising then that Central Leinster has some of the most important buildings of the Gothic Revival in Ireland. In its earliest guise the movement was confined largely to County Kildare, but full scale eighteenth-century Gothic first appears at Moore Abbey in Monasterevin (1767–71), which rises from the remnants of a former Cistercian church.

The ‘castle style’ was adopted by the disenfranchised Old English Catholic families of the Pale who jealously guarded the antiquity of their lines. Castle Browne (1788, now Clongowes Wood College) by Thomas Wogan Browne springs forth into a turreted mass from an earlier core, as does Donadea Castle, formerly an impressive seventeenth century mansion. Now a gaunt ruin in a forested demesne, Donadea Castle retains much of its brooding Gothic atmosphere. 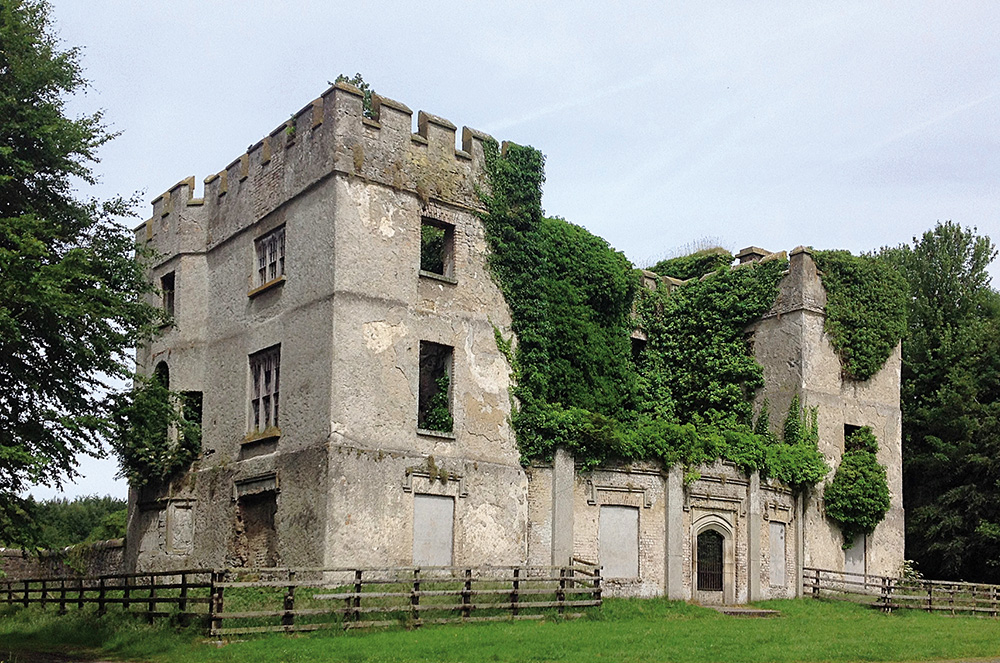 Outside of the home, gardens were natural places to refashion the historic landscape, and Central Leinster boasts some of the finest gardens in Ireland at Heywood, Castletown, Carton, Ballyfin, and Emo, among others. Many are eighteenth-century works – Claudian and picturesque, cut through with fine lakes and serpentine rivers, but Heywood’s early twentieth century sunken garden by Sir Edwin Lutyens is an outstanding later addition.

The small post-Union Board of First Fruit churches so characteristic of Ireland, yet inspired by the architecture of England, have much in common with the Picturesque Gothic aesthetic of the landscape garden. The finest, and most eccentric, are those of the late 1820s and early 1830s by John Semple, who managed to forge his own distinctive, and rather exaggerated, Gothic style. Semple’s work is scattered across Central Leinster, with some of the finest of his churches in County Kildare, such as Feighcullen (1829), now sadly derelict.

Inspired by the Archaeological Past

In comparison, church disestablishment prompted interest in a more localised and archaeologically rooted past, the ruins of medieval cathedrals proving attractive anchor points for the untethered Church of Ireland. Under the patronage of the Duke of Leinster, George Edmund Street went to work restoring thirteenth century St Brigid’s Cathedral, Kildare (begun 1874) employing unusual restraint in his insistence on archaeological accuracy and avoidance of excess ornament. 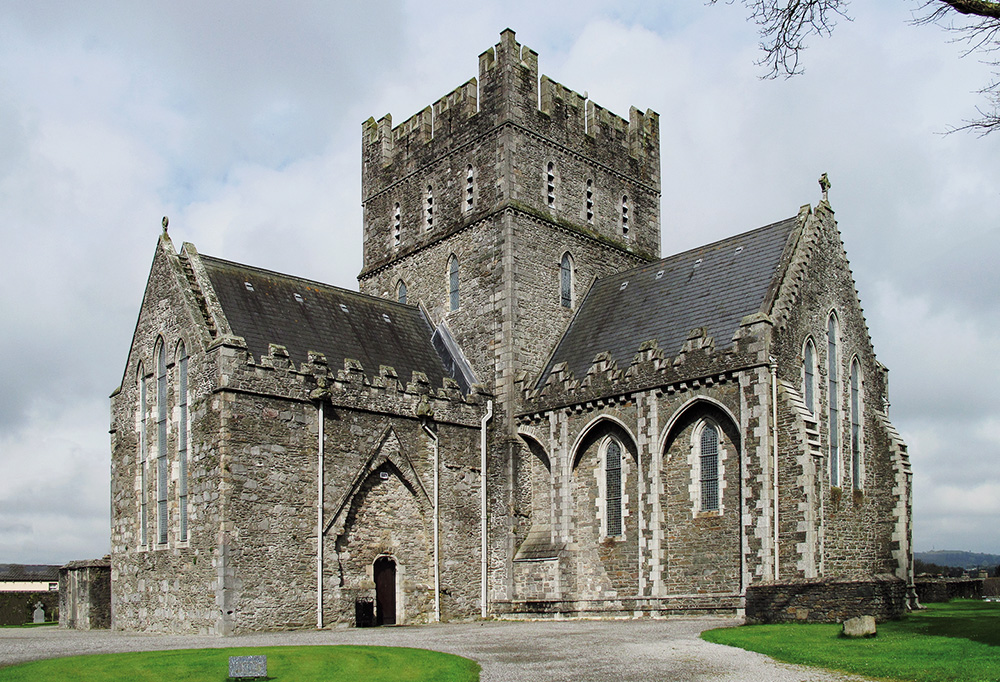 The change also unleashed a wave of private patronage that happily coincided with the Arts and Crafts movement. One of the main instigators of the cathedral’s reconstruction, Thomas Cooke-Trench, collaborated with its executant architect James Franklin Fuller to create the exquisite Hiberno-Romanesque church at Millicent (1881-83), which he enriched with sgraffito wall ornament, carved roof trusses, and finely crafted furnishings. 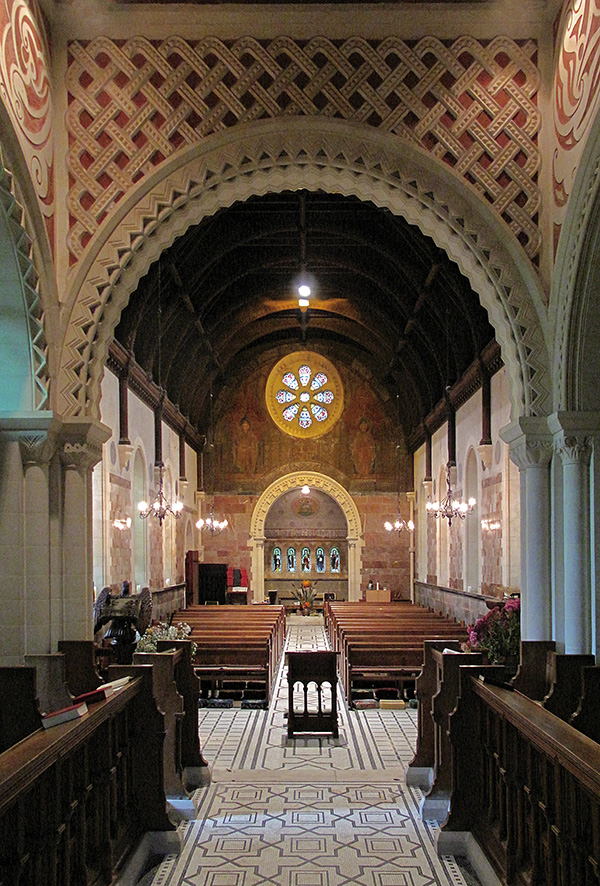 Catholic church builders, under the spell of A. W. N. Pugin, largely ignored pre-conquest Irish church buildings, dotting the three counties with ambitiously scaled towers and spires of English type. The earliest of these – and relatively little known – are St Conleth in Newbridge, begun 1847 – ‘after a design of Pugin, slightly altered’, who was then working nearby at Maynooth College, and William Deane Butler’s SS Peter and Paul, Monasterevin (1849), probably inspired by Pugin’s St Chad, Birmingham.

Pugin’s style spread west into Laois under J. J. McCarthy and J. S. Butler, and then finally to Offaly, where J. J. O’Callaghan’s large cruciform church at Clara evokes Pugin’s own cathedral at Killarney. The towering east front of St Patrick’s College Maynooth (1847–53) is Pugin’s boldest statement in Central Leinster, in a Continental Gothic idiom, deliberately severe in its detailing. He died before he could design the chapel, which is by J. J. McCarthy and William Hague.

Despite the imposing size of the buildings of the Gothic Revival, in both country houses and churches,  it is the earliest period of ecclesiastical and royal patronage that stands out most clearly in Central Leinster today. There is an indelible vitality to the great ninth and tenth century crosses at Castledermot, Moone, Kinnitty and Clonmacnoise, with their sequence of simple but expressive figurative panels, and graceful displays of interlacing ornament.

Less spectacular, but beautiful in their quiet sense of repose, are the churches and monuments close to the east-west geological highway of the Esker, a pilgrim route terminating at the monastic city of Clonmacnoise in the remote Shannon Callows, with its remarkable series of high crosses, round towers, churches, and ancient inscribed grave slabs.

Andrew Tierney is a published author, and researcher in architectural history at Trinity College, Dublin.

Yves Saint Laurent and Halston – catalogue to the show