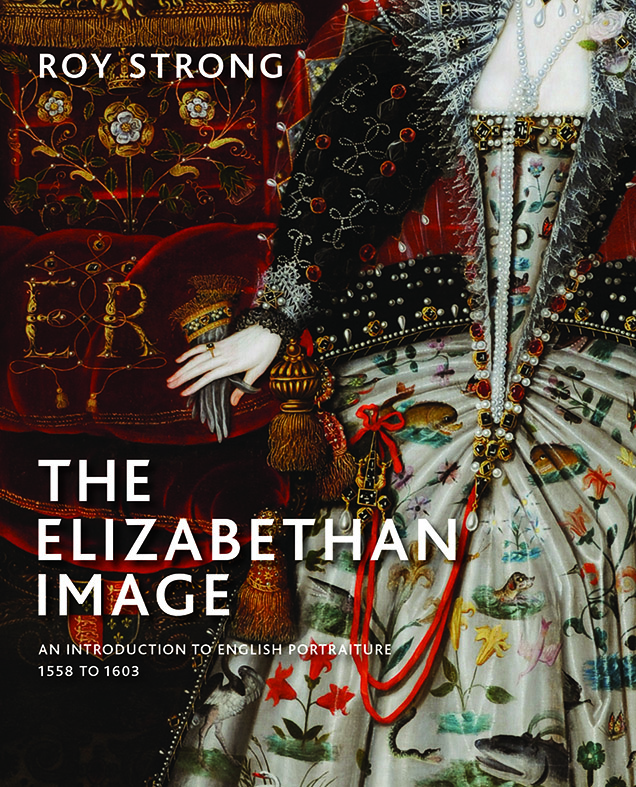 In November 1558, Elizabeth I ascended the throne and was confronted with a politically, socially, and culturally fractured country. The English Reformation had been polarising and the disparate reigns of Edward VI and Mary I before her had only deepened the divides between Catholic, Protestant, and Puritan subjects.

The political ambiguity that characterised these years is central to physical depictions of Elizabeth I and the image of herself that she sought to create. Through the formation of a new idiosyncratic artistic style, the queen and those around her could manipulate the depiction of the monarchy during their lifetimes and in the centuries that followed.

In his latest book The Elizabethan Image: An Introduction to English Portraiture 1558 to 1603, leading authority Sir Roy Strong returns with fresh eyes to the subject closest to his heart, The Virgin Queen, her court and our first Elizabethan age. Read on for an extract that reveals the story behind the famous ‘Darnley Portrait’.

The ‘Darnley Portrait’ of Elizabeth comes from Cobham Hall, Kent, seat of William Brooke, 7th Baron Cobham, who almost certainly commissioned the picture. The Queen was to visit the house twice, the first occasion from 18 to 21 July 1559 and then, for a second time, on 24th September 1573, a date that might indicate the year in which the portrait was commissioned. 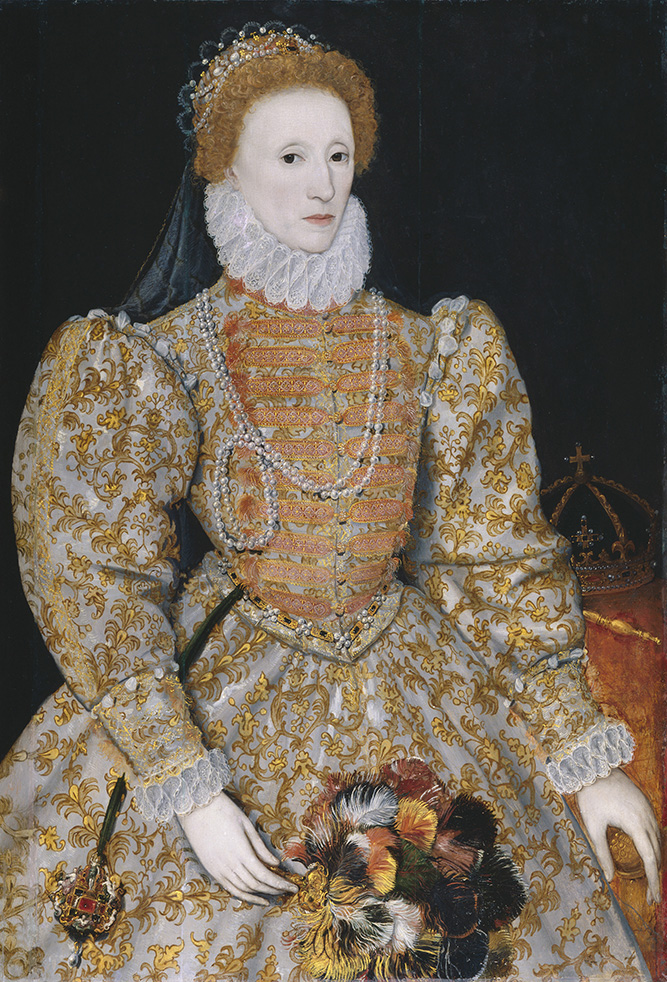 William Brooke was the eldest son of George Brooke, 6th Baron Cobham (c. 1497–1558), a soldier and extensive landowner in the county of Kent who was very much at the centre of Tudor court life. Of reformist leanings, he supported Northumberland’s bid for power on the death of Edward VI. Although pardoned by Mary, he was not quite to be trusted, and shortly afterwards was imprisoned in The Tower for his involvement in Wyatt’s uprising. He died two months before Elizabeth’s accession in 1558, when William succeeded him.

Little is known of William’s early life beyond the fact that he was married in 1535, an unsuccessful match that ended in separation. His father sent him abroad for two years, from 1543 to 1545, ‘for his further increase of virtue and learning’. At the outbreak of war with France he headed north to the Netherlands, returning in 1558 to Brussels bearing to Philip II news of his wife’s death. For four decades Cobham found favour and served the new regime as both a Member of Parliament and as occupying such posts as Lord Warden of the Cinque Ports, Constable of Dover, Vice-Admiral and Lord Lieutenant of Kent. He was to head two embassies to the Low Countries, in 1578 and 1588, and was to end as Lord Chamberlain. In 1559 his first wife died; the following year he married Frances Newton and a large family followed.

This picture was the result of the Queen sitting to an unidentified Netherlandish artist. Reflectography reveals a controlled drawing of the Queen’s features such as only would be found in the process of transferring to a panel a preparatory drawing that must have been made at a sitting. This would suggest that an artist came from the Low Countries, with which Cobham was all too familiar, especially to make this portrait. Rachel Billinge writes: ‘The outlines for the features of the face consist of the type of underdrawing obtained when a design has been transferred using a cartoon’. However, as with so much concerned with Elizabethan portraiture, we can never be absolutely certain.

The same technical process reveals that the painter’s freehand underdrawing repositioned the placing of the fan and also the Queen’s left hand. The crown and sceptre placed at her side are later additions by another painter; but what is more intriguing is the colour change to the pigments. The Queen appears pale faced and withdrawn, a mask in fact, whereas changes in the pigment have degraded what would have been a much rosier countenance. Even more dramatically the dress, whose frogging is à la polonaise, would originally have been white decorated with gold and crimson.

The jewel suspended from her waist and placed with such prominence to the left must have some significance, perhaps given as a New Year’s gift to the Queen or presented to her when she visited the house in September 1573. The central ruby has at its summit Minerva, the goddess of wisdom, and the flanking figures of Mars and Venus with Cupid, while below is Jove.

Detail of the Queen’s dress, fan, and jewel in ‘The Darnley Portrait’. (© National
Portrait Gallery, London).

This is the earliest instance of an ad vivum portrait from which tracings or patterns of the features were abstracted for distribution to artists’ studios. As in the case of the ‘Ditchley Portrait’, this could only be the result of the Queen sitting for the portrait, probably in London, and a decision reached that this was the face pattern that should be distributed. Turned to the left or the right, it was to be used for over twenty years, even into the 1590s. The dress is directly observed, and various versions in which it had been changed would again indicate that some of them at least record access to her wardrobe. One dress of black velvet with a band of jewels running down the front, worn with white linen sleeves embroidered with blackwork embroidery and protected with gauze over-sleeves, runs with little change through over half a dozen portraits. Certain jewels also recur, indicating access to them, or that drawings would be available for workshops to copy. 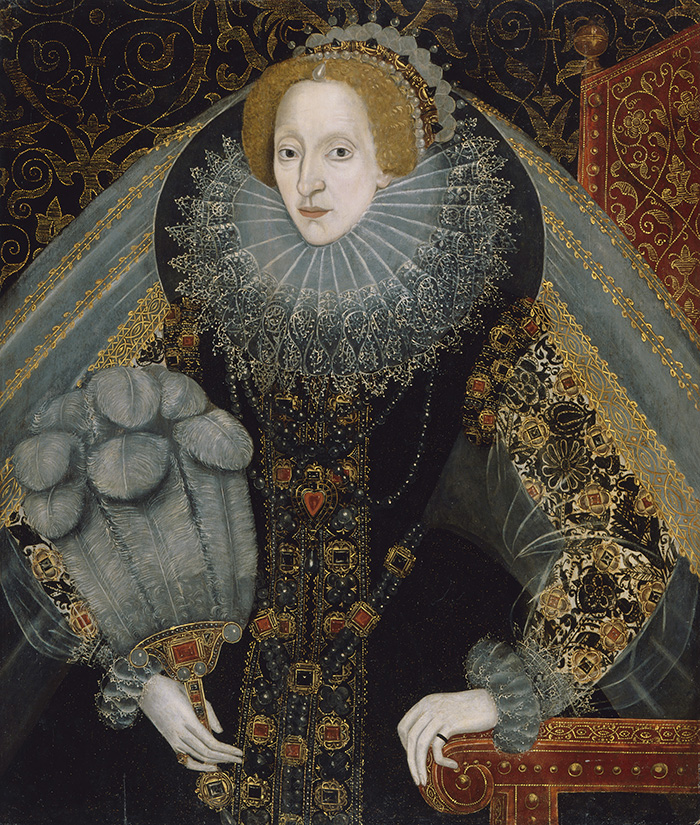 Extract taken from the second chapter of The Elizabethan Image: An Introduction to English Portraiture 1558 to 1603, published by Yale University Press, June 2019.

Sir Roy Strong is a historian, a writer, a broadcaster, and a leading authority on Elizabethan portraiture. He was director of the National Portrait Gallery from 1967 until 1973 and of the Victoria and Albert Museum from 1974 until 1984.

Click here to learn more about his latest book The Elizabethan Image: An Introduction to English Portraiture 1558 to 1603.

Find out more about Elizabethan art

Read our blog on Nicholas Hilliard, portrait painter to Elizabeth I and James I, and subject of the recent ‘Elizabethan Treasures’ exhibition at the National Portrait Gallery.

Distant voices: John Goodall on The Castle: A History

In a special piece for the Pevsner audience, The Castle author John Goodall reflects on the difficulties of…