Since the secret of Bletchley Park was revealed in the 1970s, the work of its codebreakers has become one of the most famous stories of the Second World War. Using previously classified documents, David Kenyon casts the work of Bletchley Park in a new light, as not just a codebreaking establishment, but as a fully developed intelligence agency. In Bletchley Park and D-Day, Kenyon reveals the true character of Bletchley’s vital contribution to D-Day, and ultimately, Allied victory.

To mark 75 years from the Normandy landings, we asked David Kenyon to guide us through codenames and gadgets used by Bletchley’s codebreakers.

1. Your latest book, Bletchley Park and D-Day, explores the role that Bletchley Park played in the Normandy campaign. Could you tell us a bit about the bombe machine featured on the cover?

The circular object on the cover of the book is a Bombe ‘drum’. This was one of the components of a Bombe machine, used to help break German Enigma-encrypted messages. The whole machine was about the size of a wardrobe. On the front of it were thirty-six sets, each of three of these drums. The sets of three drums were wired to create the same encrypting effect as the three moveable rotors in the German Enigma cipher machine. In an Enigma, the rotors moved as each letter was encrypted. The Bombe used multiple sets of drums to test the encryption effect of several sequential positions of those rotors simultaneously. This allowed the starting settings of the German machine to be identified, helping the message to be decrypted. 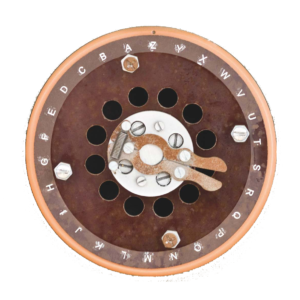 2. In the book, you mention a few very interesting code-names. Have we got any information on how codenames such as ‘Jellyfish’ or ‘Quince’ came to be?

Contrary to popular myth there was not just one ‘Enigma code’. In fact, while the same machines were used widely each German radio network set up its machine to a different setting or ‘Key’ every day. Each of these Keys had to be broken individually by BP. In the early days the different Keys were identified at BP simply by marking the messages in coloured pencil, so early Keys included ‘RED’, ‘YELLOW’ and ‘LIGHT BLUE’. As the war progressed the Germans introduced over 200 different Keys so colours were not sufficient and BP had to invent different codenames. These were grouped so that the German army Keys were named after birds, the air force after insects, and the SS after fruit.

A similar system existed when Bletchley Park started to break German Lorenz encrypted teleprinter traffic. The system was codenamed ‘FISH’ and each individual link was given the name of a different fish, hence ‘JELLYFISH’, ‘BREAM’, TROUT’ etc.

3. The Imitation Game and The Bletchley Circle have brought Bletchley to a more popular audience. Has this affected the way your research is regarded?

We have been very lucky over recent years that books and films have made the public much more aware of the work of Bletchley Park. This is great as it means more people visit, and they come with a rough idea of what to expect. However, all of these things are more or less works of fiction, so while our visitors have a vague idea of what the site was about they come with many misconceptions. Our mission in our exhibitions and publications is to address some of these and tell the story as accurately as we can. Fortunately, the true stories are often just as exciting or intriguing as the fictional ones.

4. What does the day of a Research Historian at work involve? Have you found anything unexpected in the Bletchley Archives?

My role is to carry out research to support all of our public content, so new exhibitions, online content, guidebooks and publications, and the content of our guided tours and AV guides all fall under my remit. On a typical day, I might be carrying out long term research for a new permanent exhibition (such as D-Day), as well as answering enquiries from our guides and the public. I also provide tours for our VIP visitors and represent Bletchley Park in the media, so I might be showing a guest round one day and doing a radio interview the next. I also read an awful lot of books! We have an ongoing project to fully catalogue and digitise our archives, so often I am shown things I didn’t know we had, which can be very exciting. In the past, this has included a partially decrypted Lorenz message, as well as original Japanese and Italian codebooks.

5. Bletchley Park is hosting an exhibition on D-Day: Interception, Intelligence, Invasion. What was your role in putting the exhibition together?

My job is to provide all the factual content for our exhibitions. For D-Day, this meant starting three years ago by reading published sources. This was followed by delving into archive material in our own collection and in the National Archives. Once we had the outline of the story I continued to advise the exhibition designers helping to identify documents, photos and film sequences to be used in the exhibition, as well as checking scripts and captions. I was also involved in the new live-action filming we carried out as part of the project, making sure uniforms, weapons and badges were correct, and that the beach we chose for the shoot was similar to those in Normandy. Finally, of course, there was a lot of minute checking to do to ensure everything we included was correct as far as we could make it.

David Kenyon is the research historian at Bletchley Park. He is coauthor of Digging the Trenches and author of Horsemen in No Man’s Land.

On June 6th, celebrate the 75th anniversary of the D-Day landings at Bletchley Park with David Kenyon who will give a talk on how preparations for the war’s turning point, the Normandy Landings in 1944 had started at Bletchley years earlier in 1942. On the day, Bletchley Park will be offering D-Day Tours on a first come first serve basis. Book your tickets for David Kenyon’s talk and find out more about the special exhibition D-Day: Interception, Intelligence, Invasion.

Hitler’s Hangman: The Life of Heydrich (out now in paperback) is a chilling biography of the head of Nazi Germany’s terror…