Yale’s quest to update and expand Nikolaus Pevsner’s iconic guides continues with the new edition of Sussex: West.  Containing 130 specially commissioned colour photographs, this authoritative volume covers some of the finest landscape and architecture in southern England, much of it set within the South Downs National Park.

One of the authors, Elizabeth Williamson, used to be a frequent commuter to West Sussex. In this blog she leads us past her favourite architectural sights, and provides insider tips on what readers should keep their eyes peeled for on their travels.

My long experience as a commuter to West Sussex has opened my eyes to many aspects of travel within the county, including the connections between London and the West Sussex towns and villages, and the services provided for travellers. In the first edition of the Sussex: West guide, Ian Nairn’s entries often reflected the fact that he roamed the countryside by car (his famous Morris Minor). The entry for Billingshurst (now by-passed), notes that the village had “one long curving street, the main London to Bognor Road, with very much of a coaching air. Hence it has adapted fairly easily to motoring”.  He imagined a new, twentieth century, ‘fully motorised’ pattern of development, keeping the countryside green and towns compact.

Fortunately, road planning has not generally kept up with Nairn’s envisaged ‘motorisation’ so that, though towns and villages have sprawled, country lanes still traverse surprisingly green and remote-feeling countryside, preserved in many places by the extent of great estates like Petworth and Arundel. 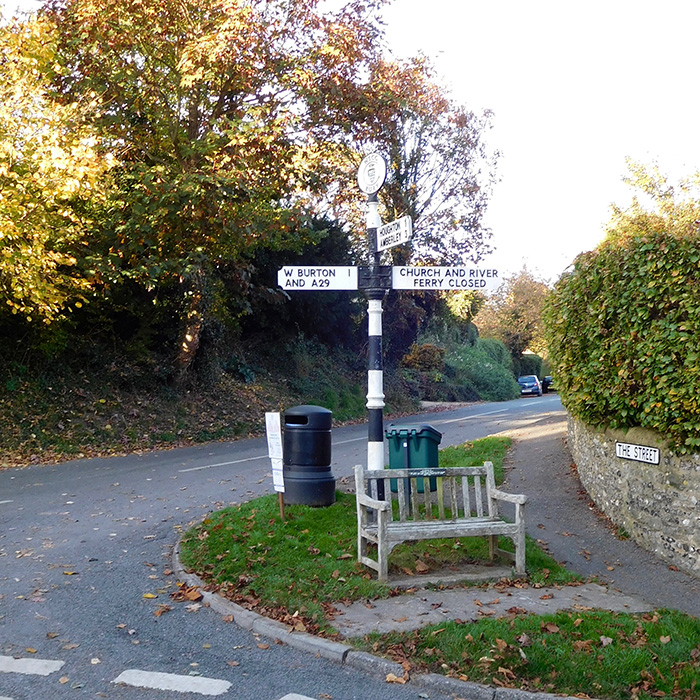 Restoration between the World Wars 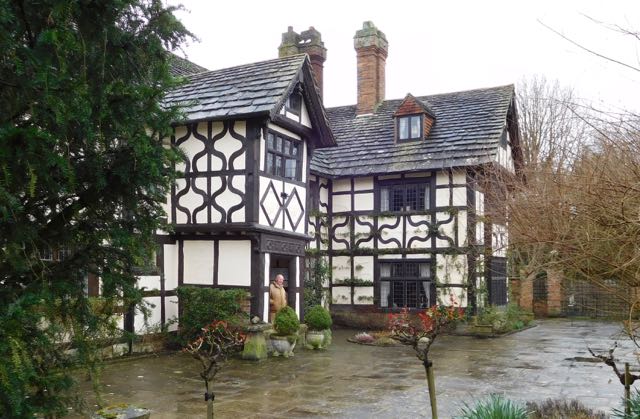 The growth of car ownership during the interwar period meant that unspoilt and neglected cottages and manor houses were enhanced, some for a second time. East Mascalls at Lindfield was more conscientiously extended by L. Keir Hett in 1937 than it had been in the 1890s, while Valewood Farm, Blackdown, was occupied and sensitively restored in 1926–8 by Oliver Hill, who shared it with the architectural writer Christopher Hussey. Similar scholarly care was shown on a much larger scale by A.V. Heal at Parham House (1922–63). Most remarkably, the fifteenth century Priest House at West Hoathly was made into a local museum and presented to the Sussex Archaeological Society in 1935. 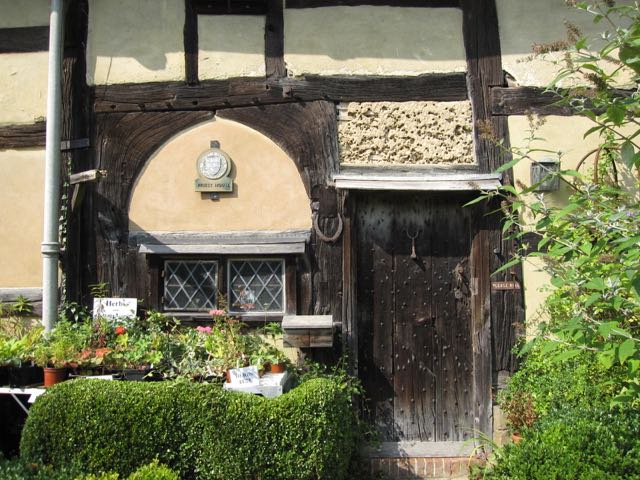 Motoring also enabled the interwar avant-garde to speed to the coast, where they built shocking houses, among them Sea Lane House at Kingston, the only English building by the famous émigré, Marcel Breuer. They stand out starkly amongst contemporary luxury ‘cottages’ at East Preston and Aldwick Bay, the holiday homes of the wealthy and aristocratic. Inland, at West Chiltington, the sculptor Randall Wells created a more affordable fantasy on the Roundabout estate, where arty weekenders could ‘slum it’ in sweet little cottages, finished with traditional Sussex Dinging (slurry) and thatch; a few can still be recognised.

But all these motorists needed garages. A pre-1914 example by Stavers H.Tiltman can be found at Haywards Heath, but most striking is the streamlined c. 1934 front of Manor Road Garage, East Preston, which hides a workshop extended by the specialists Boulton & Paull (1930). In 1948, motor racing was established at Goodwood on the wartime Westhampnett airfield. Its success attracted Rolls Royce to establish their HQ there in 2001, with a high-tech building by Nicholas Grimshaw & Partners.

A Goodwood aerodrome was also established in 1948, though local and commercial airports had started appearing earlier. Travellers to and from the present Gatwick Airport (which incorporates the 1950s terminal admired by Nairn) have probably never ventured into a nearby business park to see the original Martello Air Station by Hoar, Marlow & Lovatt, now offices and called The Beehive because of its distinctive stepped profile. This, and the more famous American Modern terminal of the former Brighton, Hove & Worthing Airport at Shoreham-by Sea by Stavers H. Tiltman (hangars by Boulton & Paull), were in 1934–6 among the first fully developed air terminals in the world. 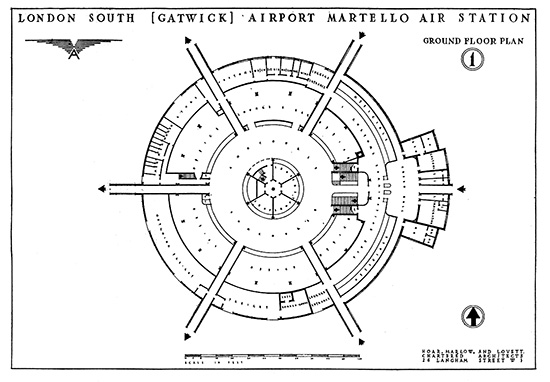 On your travels through Sussex

Rather than cars, many of us use buses (relying on a wide variety of as yet unsung bus shelters) and especially the railway network which, when Nairn and Pevsner were discovering the county, was far more extensive and linked many remote places both to each other and to London.

It is worth alighting from the train at Horsham, not only to investigate the town’s buildings in the company of Sussex: West, but also to admire the railway station built as part of the electrification of that line. Designed in 1938 by J.R. Scott, Chief Architect for Southern Railway, it was restored to take advantage of the original top-lit concourse, comparable with those found at contemporary London Underground stations. The station is now considered elegant rather than (in Ian Nairn’s words) “really horrible”. Scott also designed the progressive Durrington-on-Sea station (Worthing) with a prominent tower to house a diesel generator. 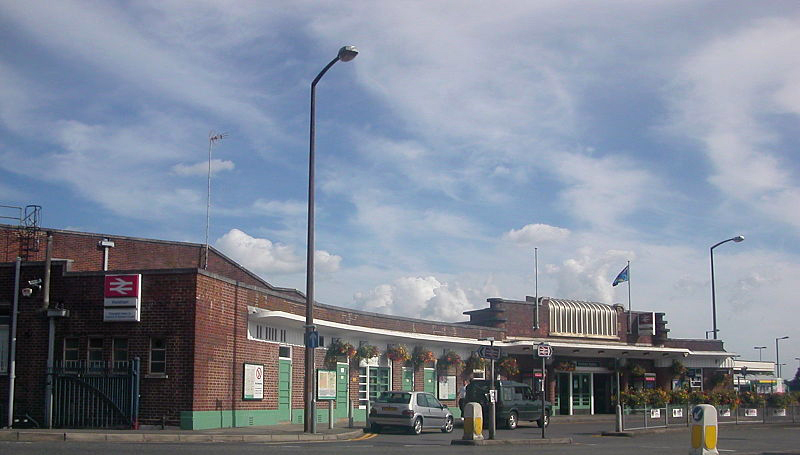 If you choose to travel further west, you will find other architecturally interesting twentieth-century stations. The unique Spanish-style Barnham station of c. 1929, and an equally airy concourse in a Festival-of-Britain style at Chichester by British Railways Southern Region Architectural Department (1956–8) are my particular highlights.

With Chichester Station we come near to the date at which Nairn and Pevsner started exploring West Sussex. For what happened next – how much remained of what the original authors saw and what marvellous buildings the revisers have found – you will need explore yourself with the new volume as your guide!

Find the latest Pevsner Architectural Guide for exploring the buildings, and beyond, in your own area.

You can also read other blogs by Pevsner authors on the Yale Art Blog, such as this one by Hertfordshire author James Bettley.