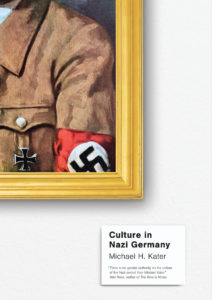 Culture was integral to the smooth running of the Third Reich.  During the war, the arts were closely tied to the Nazi propaganda machine that promoted the cause of Germany’s military campaigns.

Historian Michael H. Kater tackles the challenging relationship between Nazi Germany and the arts scene in his latest book, Culture in Nazi Germany. We asked Professor Kater about Angela Merkel’s decision to remove artwork by Emil Nolde from her office and the complex history of German Modernist art.

Much has been made in recent weeks in the international press of German chancellor Angela Merkel ordering pictures by Modernist painter Emil Nolde to be removed from her offices. There was also mention of an exhibition in Berlin featuring Nolde’s works, which, according to the New York Times on April 10, was aiming to “dispel myths surrounding Nolde’s career and art in the Third Reich.” The exhibition made clear that although Nolde’s paintings were Expressionist, the Modernist art form hated by the Nazis, Nolde had not been persecuted by the Hitler regime, as he claimed after the Third Reich’s fall in 1945, only banished to the north of Germany, where he continued to pursue his art, if not for public consumption.

Although totally correct, I find Merkel’s action ironic because a German chancellor before her, Helmut Schmidt, in 1982 had organized a special Nolde exhibition on his premises, presumably with the same paintings Merkel now removed. At the time Schmidt emphasized Nolde’s status as a victim of the Nazis and made the point that during the July 1937 Munich exhibition of “degenerate” art organized by Joseph Goebbels, viewing Nolde’s and other Modernist works there, he had broken with Nazism at the age of seventeen.

As for Schmidt, it makes me wonder why even as a lad of seventeen it had to take a Modernist painter’s public defamation, not his own Jewish grandfather, to cause a break with Hitler’s Nazis, and why he waited so long. As for Nolde, it remains a paradox that an anti-Semitic painter, a Nazi Party member, who early during the Nazi regime hobnobbed with SA storm trooper chief Ernst Röhm and other Nazi greats and whose wife Ada was a close friend of Himmler’s wife Marga, as a path-breaking Modernist was heavily indicted at the 1937 exhibition.

The “degenerate” art exhibition itself where Nolde’s creations were most heavily represented poses questions today, regarding its audience. Post-1945 reportage has it that it was flooded by visitors (as indeed it was) because they regarded it as the last chance to view the Modernist art of the Weimar Republic, now denounced. Pictures there were intentionally hung askew, they were in ugly frames, lighting was abysmal, one had to kneel to catch a glimpse. But who those viewers were has never been established. Rather than connoisseurs of Modernism, they could indeed have been Nazi-inspired followers or students already trained in Nazi-run academies who believed in the official doctrine that this was diseased artistic output; mentally ill patients’ works were on show for comparison. Why, even in the Weimar Republic Modernist art had always appealed to a small cultural elite only; the great majority of Germans found it weird.

The reaction of the press

Interesting in this connection is the reaction of Americans writing on the show for the Times. One article from July 20, 1937, reported that the exhibition aimed “to show the contrast between ‘Healthy’ and ‘Filthy’ art from 1918 to 1933,” what the Nazis called “our era of shame.” Exhibition organizer Adolf Ziegler was quoted as saying that decency had been “dragged in filth” and: “This is only a little of what we have been suffering through Jewish-Marxist dealers and critics.” The Times noted that all German newspapers had hailed Hitler’s programmatic opening speech “with much enthusiasm” and accepted it as the hallmark of a “new and healthy era in national art.” Among the visitors were noted, especially, American and British tourists.

The paper continued to report on the Nazi confiscation, without compensation, of all products of “degenerate art” in public museums and in collections, and of that “owned by German citizens.” A year later it wrote about an auction of works, previously defamed by the Nazis, in Lucerne that had been removed from German galleries and museums. These included 125 paintings, some by Gauguin, Van Gogh, Matisse and Picasso, and sculptures by Otto Dix and Wilhelm Lehmbruck. Most items thereafter were sold at “disappointingly low prices,” said the paper, with the highest price, of 175,000 Swiss francs, being paid for a self-portrait of Van Gogh by the New York editor of the progressive Art News, Alfred M. Frankfurter.

Post-1945 reportage has it that it was flooded by visitors (as indeed it was) because they regarded it as the last chance to view the Modernist art of the Weimar Republic, now denounced. Pictures there were intentionally hung askew, they were in ugly frames, lighting was abysmal, one had to kneel to catch a glimpse.

As much as the Times showed sympathy for Merkel’s actions in the spring of 2019, its previous reporting of the 1930s events today strikes me as dispassionate to the point of callousness. The Nazi art expert Ziegler’s specious distinction between “healthy” and “filthy” in art from 1918 to 1933 was not condemned, and its mention could even have been read as an approval. The designation of 1920s German art critics and impresarios as “Jewish-Marxist”–an obvious anti-Semitic smear–was repeated in the paper without censure. The Times seems to have joined the chorus of formerly bourgeois-liberal, now Nazified, German newspapers applauding a “new and healthy era in national art.” Further along, it informed of the Nazi confiscation of allegedly sick art objects, without compensation, in a matter-of-fact tone, without a trace of disapproval. And it expressed no reservations about the subsequent auction in Lucerne, avoiding the obvious question of who profited from that immoral sale illegally.

The restrained reportage by the paper today is even more astonishing as from the 1890s on, the proprietors of the New York Times were the Ochs Sulzberger family, originally German Jews. But in the 1930s, as has recently been confirmed by a new biography of the American-Jewish film writer Ben Hecht, Jews were on the defensive in the United States, due, in part, to indigenous anti-Semitism in the country fanned by charismatic personalities such as Father Charles Coughlin and Colonel Charles Lindbergh. This played into the hand of Hitler’s own Jew-hatred and encouraged him in his policy against German Jews, also in the arts. And as far as American attitudes toward German art at that time were concerned, the many noted American (and British) tourists who attended the “degenerate” art show may, in the great majority, have shared the multitude of German visitors’ view, who, highly likely, concurred with the Nazis’ hatred of Modernist artistic expression.

Michael H. Kater is Distinguished Research Professor Emeritus of History at York University, Toronto, and a fellow of the Royal Society of Canada. His previous publications include Weimar: From Enlightenment to the Present and Hitler Youth.

Brazil by Michael Reid – an extract for World Cup 2014

The FIFA World Cup begins today, with host country Brazil playing an opening match against Croatia. To coincide with…