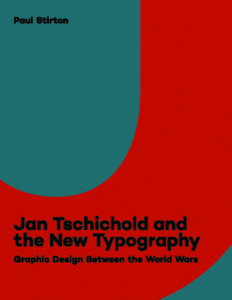 How did Jan Tschichold help to form the New Typography in the early twentieth century? Why were he and his contemporaries deemed a threat by the oppressive regime of Nazi Germany? In his new book, Jan Tschichold and the New Typography: Graphic Design Between the Word Wars, Paul Stirton offers a new understanding of Tschichold’s work and the lesser-known artist-designers that were at the forefront of a new revolution in visual culture. Read on for his fascinating introduction on how modern graphic design was built out of the avant-garde, with Cubist, Futurist, and Dadaist artists paving the way for what was to come.

“The New Typography builds on the findings of Russian Suprematism, Dutch Neoplasticism, and especially that of Constructivism.” – Jan Tschichold, 1928

The sources of modernist graphic design can be found in the various avant-garde art movements that aimed to “liberate” text from the dry conventions of traditional typography. Cubist, Futurist, Dadaist, and Constructivist artists had begun to employ textual elements in their work, seeing in the disposition of words and letterforms both a compositional device and a separate conceptual dimension of meaning through reading the signs. That dual function of the formal and the cognitive led painters to experiment with forms that were anathema to the conventions of typographic composition: wildly different typefaces, word fragments, contrasts in the scale and weight of letterforms, and multi-directional text. These effects did not operate solely within the conventions of fine art. They were visually exciting to anyone accustomed to reading text on a page or advertisements in the street. It is perfectly understandable, therefore, that a younger generation of graphic designers would want to exploit some of the unexpected ways that avant-garde artists were employing text.

“Countless rules can be written about typography […] The important thing is: never to do it the way that someone else did it before you” – Kurt Schwitters

By 1925, when Jan Tschichold published his first manifesto on elemental typography, many of the most radical artists and designers had already gone into print offering different examples of how type could express new ideas visually. In 1909, Filippo Marinetti, the central figure of Italian Futurism, claimed to have “initiated a typographical revolution directed against the bestial, nauseating sort of book that contains passéist poetry”. In his view, “the book must be the Futurist expression of Futurist thought”.

Laszlo Moholy-Nagy, in what was probably his first contribution to the Bauhaus, wrote in the 1923 catalogue that “the essence and purpose of printing require the unrestricted use of all linear directions, all typefaces, font sizes, geometric shapes, colours, etc. Given the elasticity, variability, and vitality within the contents of a sentence, we must create a new typographic language that is subject, first of all, to the inner laws of the expression”. Kurt Schwitters also saw typography as one of the fronts on which subversive ideas could be expressed. “Countless rules can be written about typography”, he wrote in 1924, “the important thing is: never to do it the way that someone else did it before you”. El Lissitzky, who collaborated with Schwitters on the magazine Merz, had a different approach that almost seems to anticipate the internet: “The printed surface transcends space and time. The infinity of books must be transcended – THE ELECTRO-LIBRARY”.

This revolutionary spirit was contagious, and many young typographers were emboldened to introduce new forms and ideas to the emerging field of graphic design. Jan Tschichold was at the forefront of this and his two key publications, Elementare Typographie (1925) and Die neue Typographie (1928), brought the disparate strands of the movement together.

Through correspondence with designers all over Europe and the Soviet Union, he was able to assemble a huge collection of graphic ephemera: posters, packaging, brochures, headed notepaper, business cards, envelopes, catalogues, book covers, magazines, and handbills. This was, in effect, an international survey of modernist graphic design, charting the field as it was being created. He used it as the source material for his various writings on the New Typography, but also as a tool for refining his own practice as a book and poster designer. In his view, the New Typography represented a comprehensive revolution in design but it could be boiled down to a few key concepts, at least as a starting point: asymmetrical composition, sanserif letterforms, and the exclusive use of photography for illustration. These were the defining features of modernity as expressed in printed matter, and it was presented to the emerging generation of printers and typographers as a blueprint for progress. For example, “asymmetry” was described as “an expression of our own movement, and that of modern life” while photography was “as expressive of our age as the woodcut was of the Middle Ages”.

What began as an experimental tendency among avant-garde artists was adapted by the foot soldiers of the print media into a new visual vocabulary for graphic communication. Furthermore, by 1930 this had entered the mainstream of commercial design across Central Europe appearing on advertisements, magazines, and especially in the corporate identity and publicity for industrial corporations. The Nazis may have put a stop to it in Germany in 1933 through mass arrests and sackings, but its power as a medium of communication, especially in advertising, would not be quelled. In the post-war period the New Typography reappeared as “Swiss Style,” and at the hands of a new generation of designers schooled on the principles of Jan Tschichold’s writings, this approach would dominate advertising design in the western world for most of the twentieth century.

Paul Stirton is associate professor of modern European design history at Bard Graduate Center in New York City and the editor-in-chief of West 86th: A Journal of Decorative Arts, Design History, and Material Culture. Learn more about his latest book Jan Tschichold and the New Typography: Graphic Design Between the World Wars by clicking here.

Be a part of the Yale Art Community

Join the growing Yale art community by signing up to our academic newsletter. You’ll receive news of newly published books in your chosen area, exclusive offers, and updates from the Yale Books Blog.

Changed your mind? You can unsubscribe at any time.

The History of Rock ’n’ Roll in 10 Songs

We are excited to announce The History of Rock ’n’ Roll in Ten Songs, by cultural critic and Rolling Stone columnist Greil…