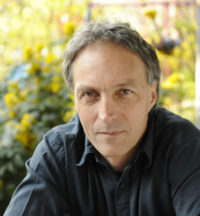 War and chaos in Syria and Iraq, violence in Afghanistan, and hopelessness in countries bordering war zones have spurred several million refugees and migrants to set out for Europe. The West Balkans, from Turkey through Greece, Macedonia, Bulgaria, Serbia, and Hungary, became the main entry route.

Based in Budapest for more than three decades, BBC journalist Nick Thorpe was perfectly placed to cover the birth of the route, its heyday, and the attempts of numerous states to close it.  The Road Before Me Weeps is his intimate account of the daily lives of those stuck in razor-wire enclosures or on the move along forest tracks, railway lines, motorways—and of the smugglers, border police, and political leaders who help, exploit, or obstruct them. Read on for an extract.

This is a book about refugees and migrants along what became known as the western Balkan route, from Turkey to Western Europe, from 2014 to 2018. This is just one of the five main routes into Europe, but in 2015 and the start of 2016, it was the most trodden.

‘Migration is like a balloon,’ an official of Frontex, the European border control agency told me, ‘you squeeze it in one place, it grows bigger somewhere else.’ The deals done in distant capitals, the walls and fences built, and the detection equipment installed have had a certain deterrent and delaying effect. But those who are determined enough will always find a way through. All the means taken to stop them simply increase their suffering, the cost of the journey and their dependence on the criminal underworld which facilitates their movement. 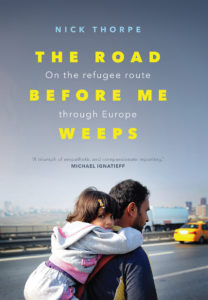 Much changed in the world while I was writing this book. What began as a chronicle of a mass influx turned gradually into detective work, tracing individuals from the mid-point to the end-point of their journeys. Such is the fragility of their status, some of the characters may be in other countries by the time you read these words. Some may have struggled gladly or reluctantly home.

It is my hope that this book, as a chronicle of an age-old phenomenon during a certain short period in modern European history, will remain a useful reference for readers many years from now. The book raises questions of human freedom and hospitality, of rights and obligations which are of crucial importance in any age.

From my home in Budapest, I returned over a four-year period to the same tracks across fields and forests, and to the same villages and towns where people rested on their journeys or were temporarily incarcerated. When the fence on the Hungarian-Serbian border was completed in September 2015, I traced the flow of people through Croatia and Slovenia. When the trickle of people over and through the Hungarian fence fell almost to zero, in the autumn of 2017, I traced people across Romania into Hungary, through Slovakia and the Czech Republic into Germany. Others took the route through Albania or Bosnia, into Croatia, Slovenia and Italy. Since their arrival in Western Europe, I have continued to follow the fate of several dozen people. Some of their stories conclude this book.

This is also the story of the help and hostility they met on their way, and when they arrived. My adopted homeland of Hungary produced the fiercest political opposition, in the form of Viktor Orbán’s Fidesz government, to both refugees and migrants. My familiarity with the Hungarian prime minister – I have known him since 1988 – gave me a useful perspective from which to follow the refugee phenomenon across Europe and the world. Though I write in the shadow of his fence, my privileged status as a BBC correspondent gave me the opportunity to zig-zag through it at will, and to speak to whomsoever I wished.

I place the experiences of those along the route in the wider context of European and global migration, and the growing fear of terrorism. And in conversations at the end of the book, with some of those who are now accepted in Germany, France and Switzerland, I explore the successes and setbacks of integration. 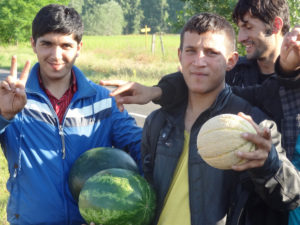 Afghan boys by the roadside near Ásotthalom. Photo by Nick Thorpe.

The title, The Road Before Me Weeps, was first suggested to me by my friend Balázs ‘Dong.’ Szokolay, a brilliant Hungarian musician and master of all manner of flutes, saxophones, bagpipes and other wind instruments. It is taken from a folk song of the Szekler people, first recorded by the collector and composer László Lajtha in the village of Bözöd in Transylvania in what is now Romania, on the eve of the First World War. There are several versions of the text. In the best-known, a man walks down the village street, so sad that even the road weeps before him, to visit the girl he loves, who has forsaken him for another man. No door opens to him.

In 1987, the Hungarian film-maker Sándor Sára gave the same title to a series of four films about the plight of the Szeklers of Bukovina, forced from their villages as refugees during the Second World War, never to return. In yet another version, sung by the Vízöntö (Aquarius) rock band in the 1990s, a Hungarian is far away across the seas, an emigrant, and his family don’t even know if he is dead or alive.

While I was writing, the people of Britain voted to leave the European Union (EU) and Donald Trump was elected forty- fifth President of the United States. Both outcomes were strongly influenced by the desire of the electorate to ‘regain control’ of their countries from those portrayed as political and business elites who favour globalisation. Both the champions of Brexit and Donald Trump’s campaign leaned heavily on public concern about immigration. It is ironic that while East European governments opposed ‘migrants’ from outside Europe, many people in Britain were swayed to leave the EU because they resented the influx of Eastern Europeans to their own countries. New business elites came to power in many countries, and stayed in power in others, because they were better able to speak ‘the language of the people’.

Nick Thorpe is central Europe correspondent for BBC Radio and TV and an award-winning journalist and filmmaker. He has written for the Observer, the Guardian, and the Independent and is the author of two previous books, including The Danube: A Journey Upriver from the Black Sea to the Black Forest.

Eclectic and Inclusive: Inside the Association of Art Historians Conference 2017