The new Pevsner Architectural Guide to Hertfordshire is an indispensable and eye-opening introduction to the wealth of fine buildings that can be found right on London’s doorstep. Fully revised, the latest volume also features expanded entries and new colour photography.

To celebrate its publication, author James Bettley takes time to reflect on his travels through Hertfordshire, its stand-out architectural sites, and the surprises he found along the way.

Hertfordshire is not a county that most people would think of as a tourist destination. For one thing it is too close to London to be taken seriously; if St Albans were a hundred miles or two from the capital, it would be a prime destination. For another thing it is crisscrossed by roads and railways, making it feel like somewhere on the way to somewhere better. Pevsner himself complained privately that there was little solitude in the county, with buses reaching into every corner, light industry mushrooming in all directions, and a ‘great number of large hospitals (especially mental hospitals)’. 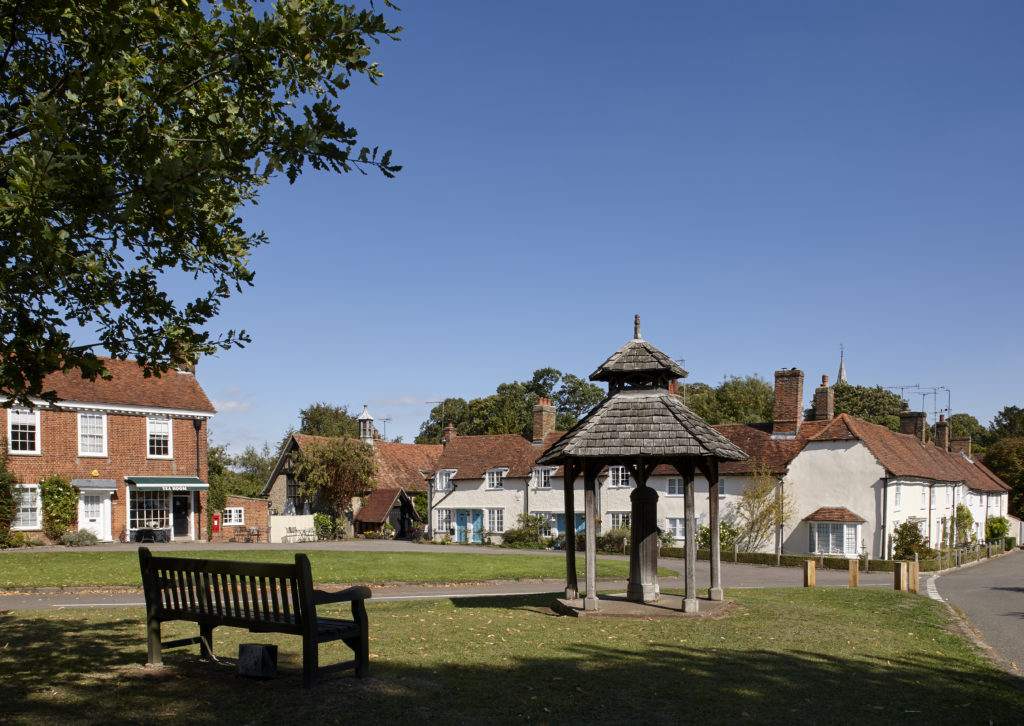 All this does the county a great injustice. It contains some lovely rolling farmland, splendid woodland at Ashridge (much of it National Trust), and the average Hertfordshire village is more picturesque than its average counterpart elsewhere.

The county has some outstanding buildings that will be known to most people: St Albans Cathedral for one, Hatfield House for another. If you haven’t actually been to Hatfield, you’ll have seen it in countless films as a location; in fact location-spotting is quite a sport in Hertfordshire, given the presence of film studios in Borehamwood and, more recently, Leavesden.

Leaving aside the big names, however, Hertfordshire is full of quirky and delightful surprises, like the Picture House at Bricket Wood designed by Frederick Wallen for himself in about 1890; it is decorated externally with a series of plaster relief panels depicting various sports and pastimes, including a rowing eight, fencing and wrestling, tennis, and cycling. Houses designed by architects for their own occupation are quite a feature of the county.

Hertfordshire of course has many fine Anglican parish churches, but perhaps the outstanding church building, certainly of the 19th century, is the Roman Catholic Church of the Holy Rood in Watford, 1899–1900, by J. F. Bentley, who also designed Westminster Cathedral; for me it narrowly beats A. W. N. Pugin’s chapel for St Edmund’s College, Old Hall Green, of 1844–53. More surprising than either of these, however, is the Jain Temple at Northaw, built in 2004–5: utterly authentic and just as one might expect to see in India, built of pink sandstone and white marble. In fact the stone was quarried and carved in India, then shipped to England for assembly. Equally exotic is the Amaravati Buddhist Monastery at Great Gaddesden, but here the buildings were designed by an English architect, Tom Hancock, using local materials and techniques (timber-framing), creating pagoda-like temple and cloisters. At Bhaktivedanta Manor, Aldenham, on the other hand, the late-19th-century exterior of what was Piggott’s Manor gives little indication of the Hare Krishna Temple within.

Two of the greatest surprises are underground. The older of the two is Royston Cave, although no one knows quite how old it is; the walls inside the bottle-shaped cavern, which is beneath the crossroads at the centre of the town, are carved with reliefs that are mainly religious in character, none thought to be older than 1350. Many theories have been proposed for the origin of the cave, as well as connections with the Knights Templar and freemasons, but none are totally convincing. The other underground surprise is Scott’s Grotto at Ware, created by the Quaker poet John Scott in the mid-18th century. It consists of a number of passages and chambers (mostly circular) laid out as intricately as the catacombs in Rome, the walls decoratively lined with flints, shells, quartz, pieces of glass, and so on. Both are open to public and are well worth seeking out. 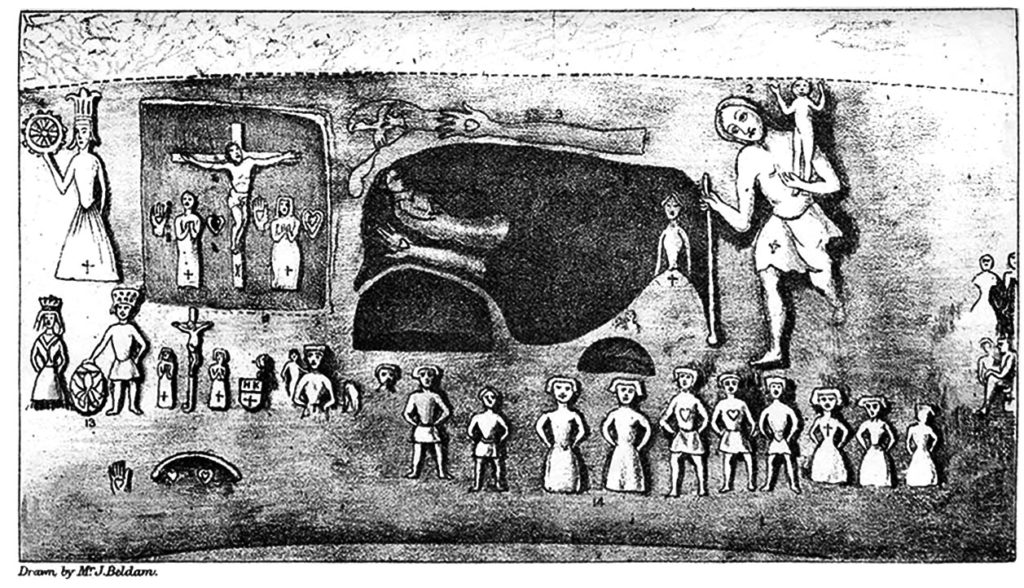 The New River: neither new nor a river

Ware is also a good place to explore the New River, which crops up in various places across the county and in many ways is one of the most impressive and likeable structures in Hertfordshire. It is neither new nor a river, but an aqueduct that opened in 1613 to supply London with fresh water. The remarkable thing is that is still performs its original function, providing about 8 per cent of the capital’s water. The original source was Chadwell Spring outside Ware, with another spring a little way downstream at Great Amwell. 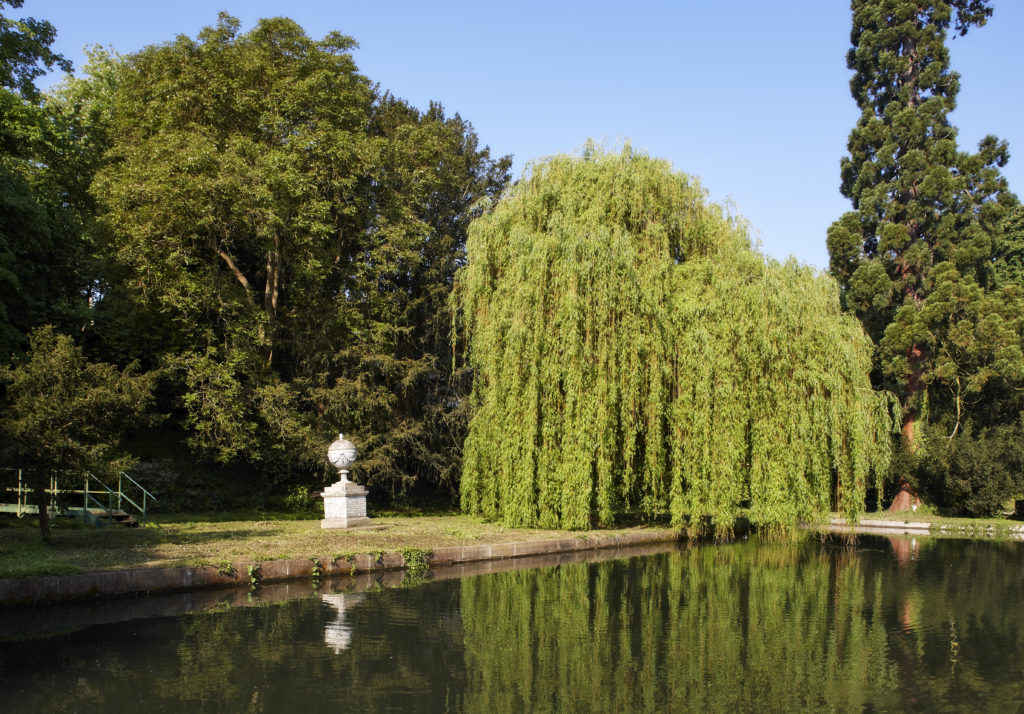 In 1738 a cut was made from Chadwell Spring to the River Lea to increase the flow of water, and in the 19th century the supply was further augmented by a number of pumping stations that abstracted water from deep wells. The New River meanders gently from the River Lea to New River Head, Islington, a distance of over 40 miles, in the course of which it falls no more than 19 ft – just enough to allow the water to flow. On its way it passes through countryside and towns (popping up in front of the church at Broxbourne, for example), crossed by delicate cast-iron bridges, like a canal without barges. Unrecognised by most users of the M25, it even crosses that motorway, in an enclosed concrete aqueduct just west of junction 25. The New River may not be the most architectural of Hertfordshire’s sights, but I was always pleased to see it on my travels through the county.

Find the latest Pevsner Architectural Guide for exploring the buildings, and beyond, in your own area.

Alan Allport, the author of the forth coming book: Demobbed, will be joining us from tomorrow (18 June 2009), here at the Yale London Blog, to retell the day-by-day British experience of military demobilisation after the Second World War.