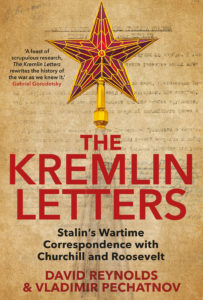 For nearly four years, and against all the odds, Winston Churchill, Franklin Roosevelt and Josef Stalin led the most effective alliance in history. Yet they met face-to-face only twice. Instead, the ‘Big Three’ had to communicate through secret telegrams and coded letters. They exchanged more than six hundred messages between 22 June 1941, when Hitler invaded the Soviet Union, and Roosevelt’s sudden death on 12 April 1945. And, as this extraordinary correspondence demonstrates, each member of this implausible trio became fascinated by the other two, genuinely trying, in his distinctive way, to build personal relationships.

From birthday wishes to arranging meetings and discussing the war, Churchill, Roosevelt and Stalin’s correspondence reveal hidden nuances in how they interacted during that crucial time in the world’s history. In this article, David Reynolds reflects on the process of piecing together the story of The Kremlin Letters, co-authored with Vladimir Pechatnov.

Churchill and Roosevelt waged war as allies for nearly four years. Yet they met face to face for less than two weeks. Our book shows how the triumvirate conducted their relationship most of the time: through the now unfashionable medium of letter-writing. The result – we believe – is a novel perspective on the Big Three, as human beings and as political leaders.

Constructing a narrative from the letters of the ‘Big Three’

The actual letters have been available for sixty years – the Soviet Foreign Ministry published them in Russian and English in 1957, partly in retaliation for piecemeal quotation by Churchill and other memoirists. But, although largely accurate, this was simply an edition of the raw messages, lacking much context and with the British and American strands printed in separate volumes. Our book brings the messages together in a single chronological sequence, thereby unfolding the story of the wartime alliance from Hitler’s invasion of the USSR on 22 June 1941 to Roosevelt’s sudden death on 12 April 1945. And we go beyond the standard format of such edited texts in what John Gaddis – doyen of Cold War historians – has generously called “a pioneering effort to embed documents within a single sustained narrative.”

That narrative has been constructed from a much larger database pieced together from the archives of all three countries in a research project generously supported by grants from the Leverhulme Trust, the British Academy and the Russkiy Mir Foundation. The database includes drafts of the messages, discussions about their proposed content – particularly in the British War Cabinet – and invaluable accounts from the ambassadorial delivery boys about how the messages were actually received. Among these men, Ivan Maisky, Stalin’s man in London till mid-1943, takes the prize for his vivid renditions of Churchill’s varied and highly emotional reactions. Here are a few extracts: “His face was white as chalk and he was breathing heavily. He was obviously enraged … He shut his eyes for a moment, and when he opened them I could see tears … Churchill must have had a drop too much whisky.”

New material from the Russian Archives

It is the Russian material that gives the book much of its novelty and freshness – not just from the Maisky diary (now available in English thanks to Gabriel Gorodetsky and Yale University Press), but from the Stalin fonds in the Russian State Archive of Social and Political History, the Presidential Archive of the Russian Federation and the Foreign Ministry Archive in Moscow. These were mined exhaustively by Vladimir and his junior colleague Iskander Magadeyev. Here we can see at work the remarkable team of Foreign Commissar Vyacheslav Molotov, from whose office most of the draft messages originated, and Josef Stalin, unquestionably editor-in-chief.

All this documentation reveals in rich detail the Big Three’s “epistolary relationship.” Not quite on a par with the letters exchanged by Voltaire and Catherine the Great, let alone Abelard and Héloïse, but in its own way memorable and significant. Some messages dealt with weighty issues such as the Second Front, the Arctic convoys and the fate of Poland – on all of which Churchill and Stalin often had explosive arguments. At other times the exchanges were lighter, even chatty: news from the battlefronts, congratulations on notable successes, and occasional digs at foreign leaders such as Charles de Gaulle. Churchill and Stalin even exchanged birthday greetings each year.

Churchill and the “two Stalins”

Yet Churchill never quite fathomed the Soviet leader: to explain the apparently inexplicable mix of letters – sometimes on the same day – he developed the concept of “two Stalins.” Friendly messages were deemed to be from the man himself, while nasty ones were attributed to pressures from dark forces in the shadows of the Kremlin.

Others in London and Washington shared this binary image, yet it was a bizarre illusion. As Sheila Fitzpatrick has recently underlined [in her book On Stalin’s Team, 2015], Stalin worked with a team, but none of them – certainly not Molotov – had any doubt who was Boss. The Soviet leader managed to build relationships with his allies, while retaining the ability to keep them guessing. His growing skill as a diplomatist is clearly documented in the book. This was one of the most surprising features of the correspondence for assistant editor Olga Kucherenko – a specialist in the social history of the Great Patriotic War. We think that our readers will be equally intrigued. 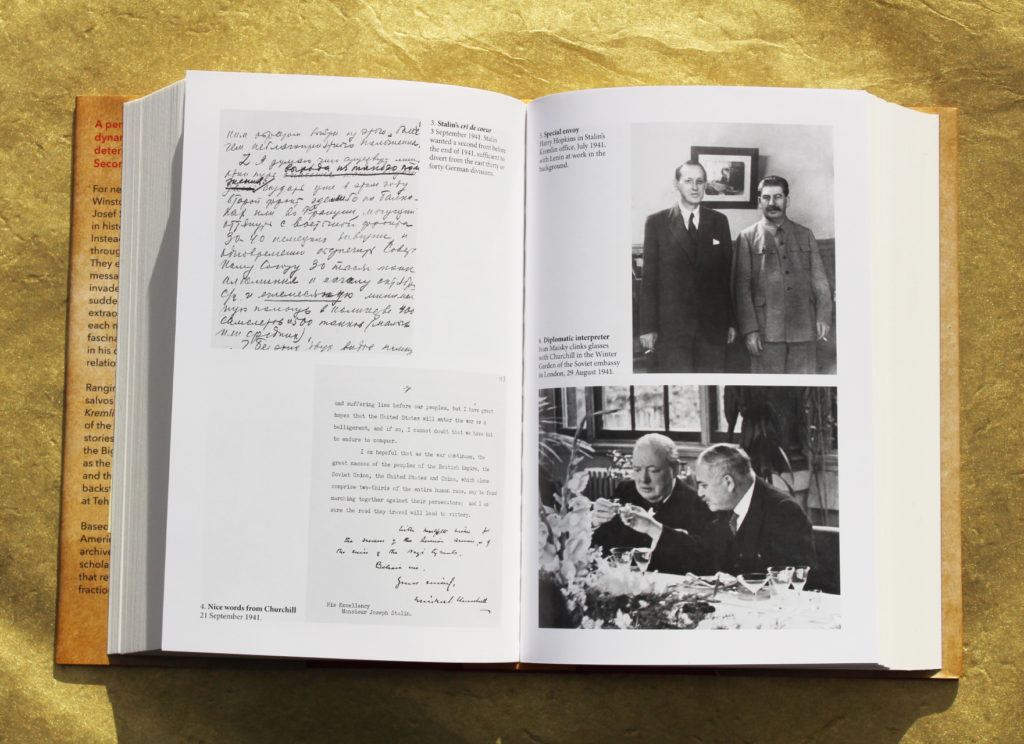 Churchill and Stalin were the more prolific correspondents. Roosevelt, by contrast, sent fewer messages and generally relied on drafts from aides and government departments – adding just a few personal touches. FDR often used VIP envoys, such as right-hand man Harry Hopkins or former Ambassador to Moscow Joseph Davies, to ensure access to Stalin. On their return to Washington, the Wheelchair President would pump them for every possible insight into the Kremlin recluse. Roosevelt’s real goal was to use the correspondence to pave the way for personal meetings and thereby bring the Soviet Union in from the cold. Ideally, he wanted one-on-one discussions with Stalin, without Churchill – whom FDR considered a benighted Victorian imperialist, unable to imagine a post-colonial world.

The President’s efforts to arrange these meetings bulk large in correspondence. We can watch his gambits and also the adroit way Stalin played his cards, aware of the President’s ardour. He declined to meet until the USSR was in a strong military position after the Red Army’s victory at Kursk in July 1943, and he also forced FDR to come to him – at Teheran and then at Yalta. The first trip undermined Roosevelt’s health, the second finished him off. 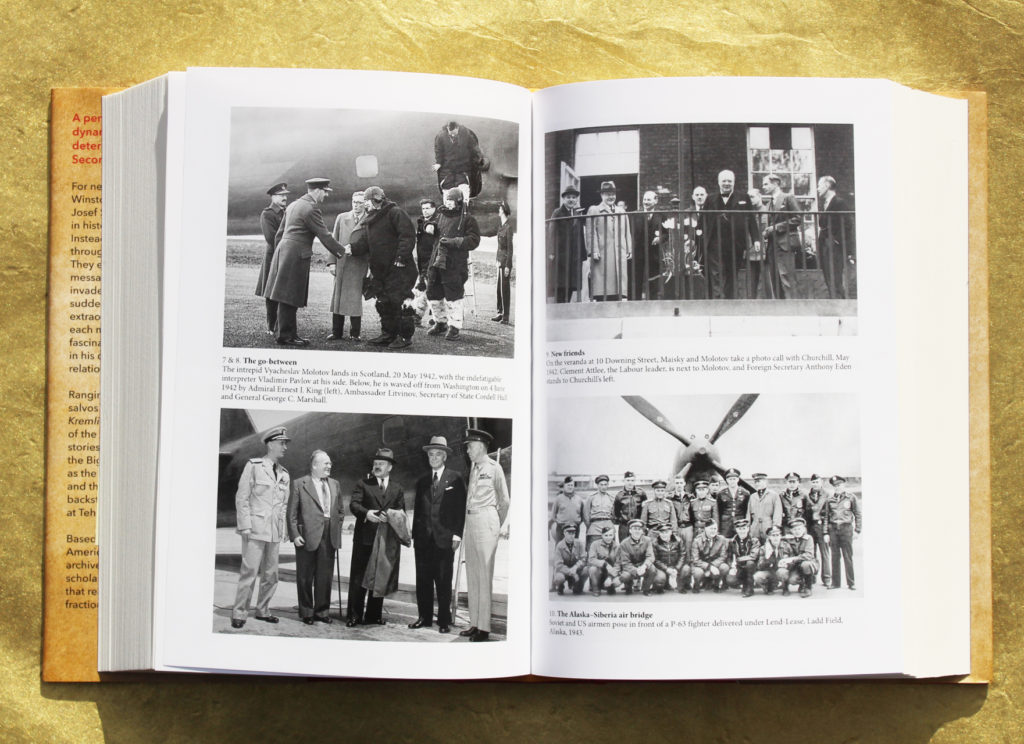 Left to right: 1. Vyacheslav Molotov lands in Scotland, May 1942 2. Molotov is met by Admiral Ernest J. King (left), Ambassador Litvinov, Secretary of State Cordell Hull and General George C. Marshall, June 1942 3. Molotov, Maisky and Churchill on the veranda at 10 Downing Street, May 1942 4. Soviet and US airmen pose in front of a P-63 fighter, Alaska 1943

Yet, as our final chapter shows, in the last months of his life the dying president finally became the senior partner at the Western end of the correspondence. On paper, as in the war effort as a whole, Washington was now calling the shots. It is striking that hardly any of some 3,400 words that the White House sent to the Kremlin in the last six weeks of Roosevelt’s life were composed by Franklin Roosevelt. But they were authentically his voice. It was a remarkable and moving story – as you will understand when you read The Kremlin Letters.

David Reynolds is professor of international history at Cambridge University and the author of eleven books. Vladimir Pechatnov, a prolific scholar of the Cold War, is chair of European and American studies, Moscow State Institute of International Relations.

The Kremlin Letters: Stalin’s Wartime Correspondence with Churchill and Roosevelt is a penetrating account of the dynamics of World War II’s Grand Alliance through the messages exchanged by the “Big Three”. Order your copy here.

This summer sees the publication of two new cosmology books from Yale: Journey of the Universe and The New…