Armistice Day was declared on the eleventh hour of the eleventh day of the eleventh month, 1918. In Peace at Last, author Guy Cuthbertson, associate professor at Liverpool Hope University, focuses solely on the day itself, examining how the people of Britain, and the wider world, reacted to the news of peace. Starting at midnight and continuing to the evening’s celebrations, his portrait of this extraordinary day shows how the people on the street, as well as soldiers and prominent figures like D.H. Lawrence and Lloyd George, experienced a strange, singular day of great joy, relief and optimism.

Read on for an extract… 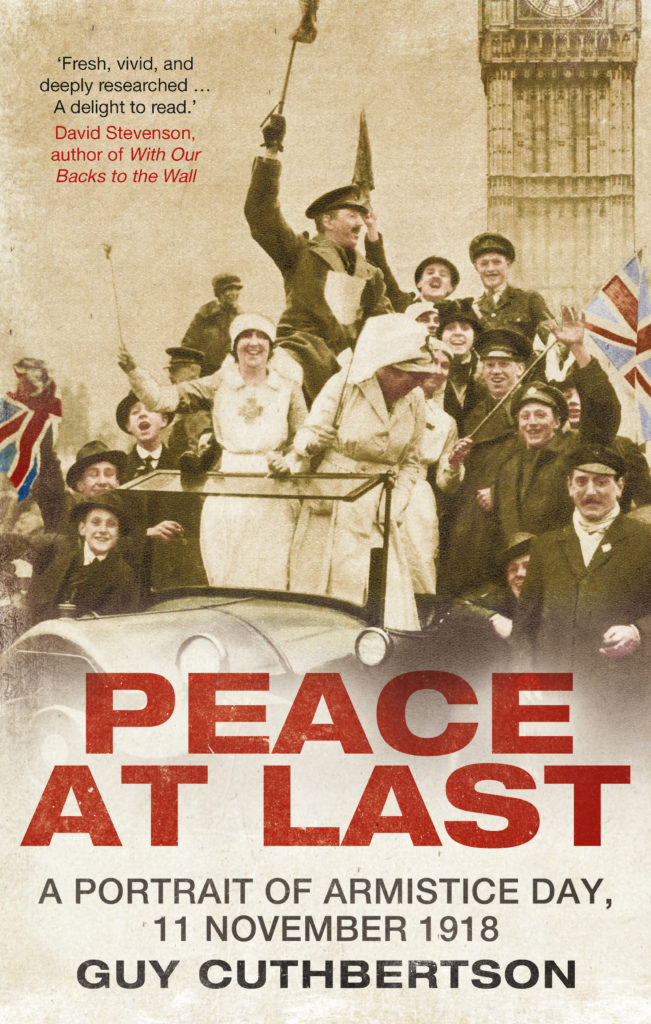 The hands of the clocks reached 10.59 a.m., the last minute of the war on the Western Front. In that last minute before 11.00, clock-watching men listened to the tick-tick-tick of the watch and the tick-tock of the clock. At Oudenaarde, Philip Clayton had bought mouth-organs and handed them out to troops, so that they had something to play when peace arrived. On the River Dender in Belgium, British troops had reportedly attacked a village called Lessines at 10.55, securing a bridgehead at 10.58 and taking the village at 10.59, eventually capturing four officers and 102 other ranks.

The pessimist might be able to understand such foolhardiness: the war could resume again soon, maybe within hours, so it was sensible to take as much land and as many prisoners as possible while the enemy were at their weakest. But an attack by Canadian troops near Mons at 10.58 resulted in the death of Private George Lawrence Price. A Liverpool Pals battalion were at the France–Belgium border near Clairfayts when ‘at 10.59 a.m., Captain R. West, the Staff Captain of the 199th Brigade, rode up with a message to the effect that all hostilities would cease at 11.00’. Artillery fired their last shells, often with tremendous intensity right up to the ceasefire. If nothing else, they were disposing of shells so that they didn’t have to transport them back to base or back to Britain. Germans died in fighting near Ath on the verge of the ceasefire. American soldier Henry Gunther died at 10.59 and is considered to be the last soldier to be killed in the war, when he was shot by a machine gun at Chaumont-devant-Damvillers. Another member of the American forces was apparently seriously injured by a shell also fired at 10.59, and he described from a hospital bed later that day how he came to be injured:

He said he was on duty in the telephone exchange of one of the Artillery regiments, and the message came over the wire, ‘It is 11 o’clock and the war is—’ At this point, he said, a shell landed and burst in the room, killing his ‘buddy’ and seriously wounding him. So far as I have been able to learn, these were the last casualties of the war. The shell was doubtless fired a second or so before 11 o’clock, and reached its mark a few seconds after the clock had struck the hour which brought peace to more millions of people than had any other hour in the world’s history.— John A. Lejeune, The Reminiscenes of a Marine, p.313

Dying just before the end of the war became an example of extreme bad luck, an instance of how the gods – or the generals – play with us for their sport. In Muriel Spark’s The Prime of Miss Jean Brodie (1961), one of the few things we know about Miss Brodie’s lost lover (if he existed at all) is that he died a week before the Armistice; in the film Goodbye Mr Chips (1939) a key character dies in battle on 6 November, which is considered all the more tragic because peace has almost arrived; and in Dorothy  L. Sayers’s The Unpleasantness at the Bellona Club (1928), we’re told that a man died half an hour before the end of the war – ‘damnable shame’. Those who died that morning were to be almost novelties, standing out on war memorials and in newspapers because of the date of their death. A slightly earlier Armistice, possibly as a result of a little less time spent talking in Foch’s train, could have saved many lives; and no one knows what those who fell might have given to the world had they lived.

At 11.00 the game was over. There was silence. It was like going deaf. This was what the poet John McCrae had foreseen in ‘The Anxious Dead’ as ‘earth enwrapt in silence deep’. The story of the war came to an end and this was the blank white page after the book’s last words.  The Front even looked like a white page.

Peace at Last: A Portrait of Armistice Day, 11th November 1918 is out now.

Guy Cuthbertson is Associate Professor in English Literature at Liverpool Hope University and the British Academy’s Chatterton Lecturer on Poetry in 2018. He has edited two volumes of Edward Thomas’s prose and is the author of Wilfred Owen (Yale, 2014).

The English Reformation: Was Henry VIII the founder of Roman Catholicism? by Peter Marshall

2017 marks 500 years since the Reformation. Peter Marshall, author of Heretics and Believers, asks whether Henry VIII really was…