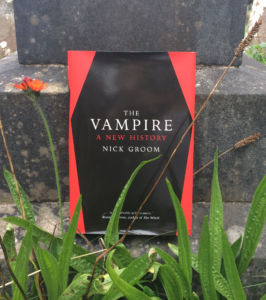 Vampires have fascinated humanity for centuries. In his new book The Vampire: A New History, author Nick Groom examines how vampires have captured our imaginations from when they first came to public prominence in the 18th century up to the present day.

The fear of corpses coming back to life and bloodsucking is an ancient one. In the bible, Adam’s first wife Lillith is the mother of demons and has latterly been presented as a vampire. The first literary incarnation of the creature was Lord Ruthven, the vampire of John Polidori’s novel The Vampyre, published nearly two hundred years ago in 1819. The literary craze for vampires would reach its high point with Bram Stoker’s Dracula in 1897 – a book whose monumental creative influence still endures in literature, TV and film.

To celebrate the publication of The Vampire: A New History, we posed some questions to Nick Groom to illuminate why vampires still hold such enduring fascination for us.

When was the first real vampire?
The first fully documented case of a proper vampire – as opposed to mere blood-sucking demons – was three hundred years ago, in 1725 on the borders of the Habsburg Empire. My book focuses on this and similar cases and how they were forensically investigated. And this was a long time before novelists got hold of them.

When did vampires become truly famous?
Within a few years ‘Vampiromania’ had swept over the whole of Europe. There were literally dozens of articles and books published on the subject in the early 1730s. The first Vampire novel, written by Lord Byron’s physician, Dr John Polidori, was published in 1819.

How do you kill a vampire?
I’d actually be in two minds whether we should be killing them or not as they’re an endangered species. But if you really have to kill a vampire proper today, the classic method is staking through the heart (ideally with a hazel stake), then decapitation, cremation, and casting the ashes into a fast-flowing river.

Why do writers love vampires?
Vampires are so nearly human that they are excellent to think with. They pose intriguing questions about the world and our place in it: what distinguishes us as human beings from other creatures? What distinguishes life from death?

Who is your favourite vampire?
Margery of Quether – a tiny ancient vampire with just one tooth, though I wouldn’t want to meet her. Pete Murphy, frontman of the great Goth band Bauhaus, has a certain vampiric allure – I’d be happy to meet him.

When would you go to find vampires today?
Soho clubs, probably. And on the internet, home of the weird and the wonderful – although those who do self-identify as vampires (and there are a few, especially in the US) tend to be elusive and averse to publicity. Not surprising bearing in mind the history of vampires, which tends to treat them as scapegoats.

Nick Groom, known as the “Prof of Goth”, is professor of English at Exeter University, UK. He is the author of The Gothic: A Very Short Introduction, and The Seasons: A Celebration of the English Year, which was shortlisted for the Katharine Briggs Folklore Award and came runner-up for BBC Countryfile Book of the Year.

Yesterday saw the opening of ‘Vermeer’s Women: Secrets and Silence’ at Cambridge’s Fitzwilliam Museum, which showcases the astonishingly…