The new Pevsner guide Hampshire: South completes the two volume revision of the county and covers the whole of its southern seaboard from Bournemouth in the west to Emsworth in the east. The fully revised original text includes new research and 130 specially commissioned colour photographs. Introducing the new volume is its co-author Charles O’Brien, a joint series editor of the Pevsner Architectural Guides, who is highlighting the maritime character of the county’s architecture. 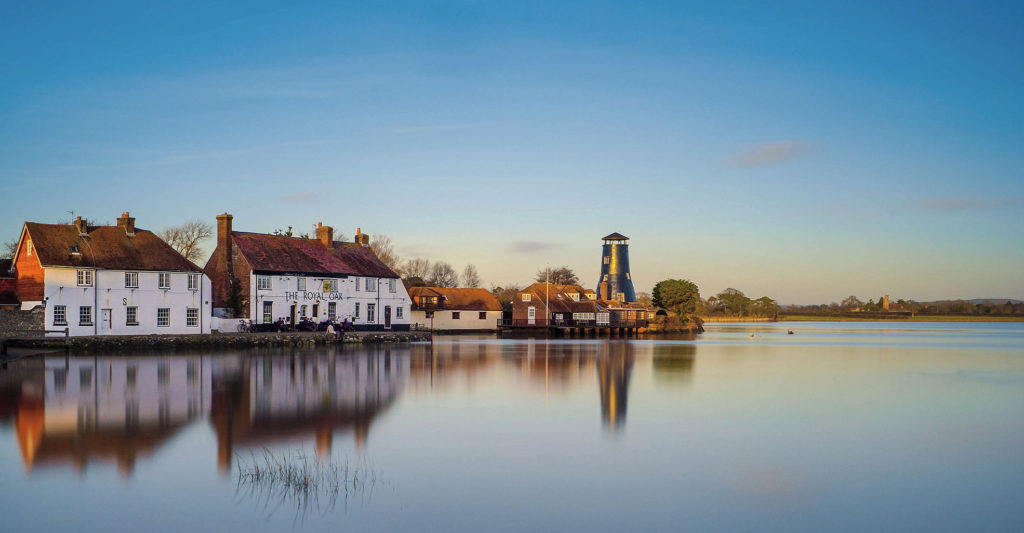 Hampshire Architecture and the Sea

Within the area of south Hampshire are some of the county’s memorable architectural highlights beginning with the Roman fort at Portchester, a late-third-century structure of which the complete circuit of enclosing walls survive. It was subsequently used as the enclosure for Southwick Priory and thereafter as the extensive outer bailey of the medieval royal residence of Portchester Castle of which substantial remains are intact, including the Norman keep. 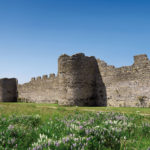 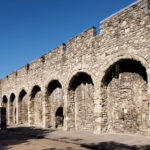 The circuit of medieval walls protecting the old town of Southampton, dates predominantly from the late fourteenth century following attacks by the French, and overlays the fronts of Norman houses that faced directly on to the quay at the mouth of Southampton Water. The city walls are largely intact but visitors today find it hard to appreciate that until the 1930s, when land was reclaimed for extension of Southampton Docks, the sea still lapped at the bases of these walls.

Southampton was for a brief period a base of the king’s navy but it was Portsmouth that was pre-eminent in this regard. The banks of the river estuaries of the Itchen and Hamble were the locations for significant shipbuilding yards by the medieval period and continued to supply major warships for the Navy up to 1815. Henry VIII’s expansion of his navy was accompanied by the construction of new buildings for coastal defence. 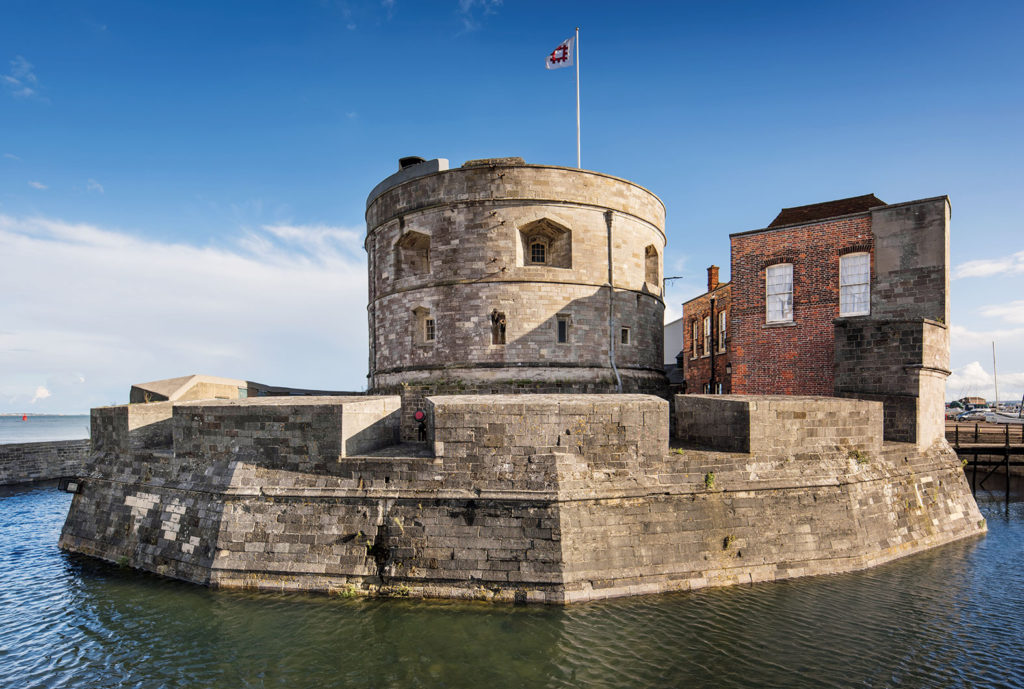 Calshot Castle, built in 1539-40, is one of the forts constructed to guard against incursions by enemy ships into the Solent and Southampton Water with circular or polygonal keeps inside bastion walls. Renewed anxieties of the late eighteenth century, linked to American and Revolutionary wars, saw development of further forts to the latest designs. Among them, Fort Cumberland (Portsmouth), dating from 1785 to 1812, is one of the best preserved of its kind. In the nineteenth century the fear was that an invading army might attempt a sea landing on the shores of Stokes Bay and attack the naval base at Portsmouth from inland with long range artillery. New defences were built to protect Gosport and Portsmouth and resulted in the awesome but ultimately unnecessary forts forming a line from Gosport (Fort Brockhurst) and Fareham and along the great chalk ridge of Portsdown behind the city. Even more remarkable are the circular forts built in the Solent at Spithead, some of which have been converted to hotel uses.

The view across Portsmouth Dockyard towards the north west shows the magnificent developments of the eighteenth century, with the former naval academy in the foreground, topped by a dome over a room for teaching navigation, grand storehouses and ropeworks. Much of the yard is still an active naval base, presided over by the residence of the Second Sea Lord, designed by Samuel Wyatt. The yard was at the forefront of industrialisation in the eighteenth century and the site of pioneering developments in mass production of wood blocks for rigging, using machines patented by Marc Brunel.

The sea attracted marine villas built on picturesque sites overlooking the ocean, sometimes within small landscaped parks. Luttrell’s Tower at Eaglehurst designed by Thomas Sandby, c.1780 for Temple Simon Luttrell is a superb example of the enthusiasm for residential Gothick follies. By the early nineteenth century, following the Napoleonic wars, the coastal area of Hampshire began to offer possibilities for larger resort development, although never on the scale of the towns of Sussex. The Duke of Norfolk, lord of the manor of Hayling, was party to attempts to develop the southern beach of the Island in the 1820s but this was never fully realised and only a fragment now remains of the great Crescent that was projected by Robert Abraham. 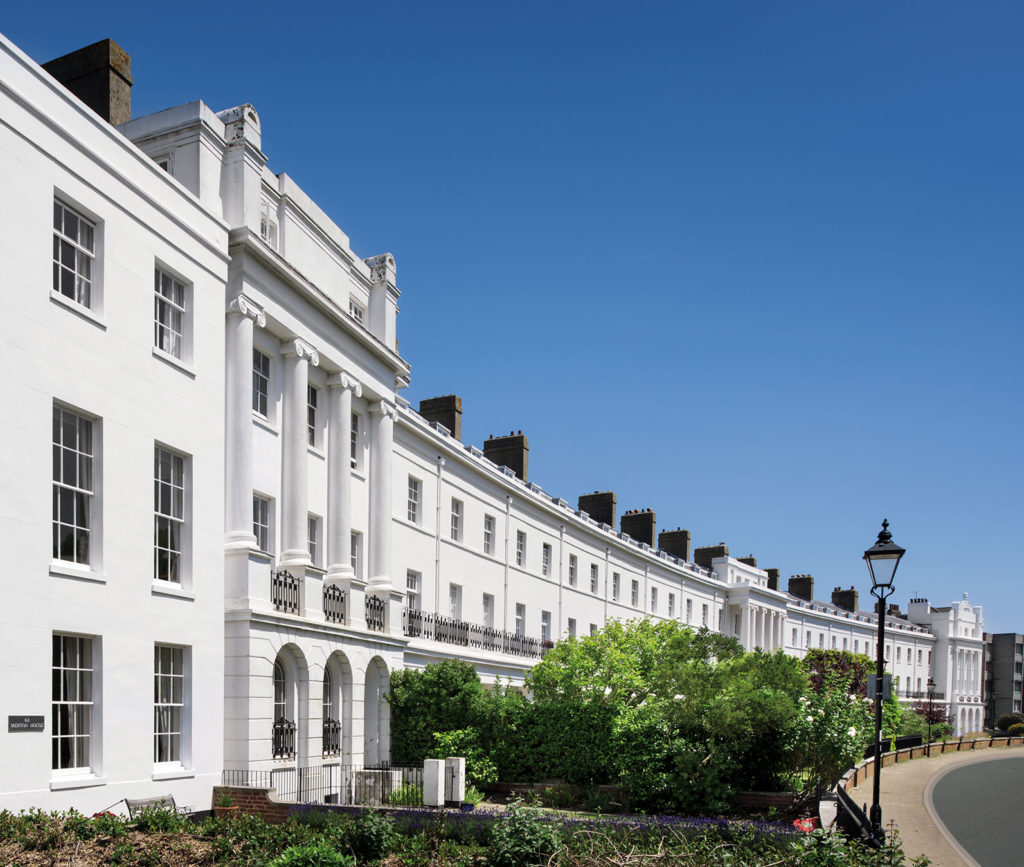 At Alverstoke, near Gosport, a similarly ambitious scheme was embarked upon for a residential enclave to be known as Angleseyville. Although, like Hayling, this was only ever partly completed, the Crescent of 1828-30 is one of the very best domestic developments of its time in Hampshire. It was designed by Thomas Ellis Owen, shortly before he embarked on his own scheme of speculative development at Southsea, outside the old town of Portsmouth.

Only Bournemouth, whose major development began in the 1830s, can boast the status of a high class ‘watering place’ to rival Eastbourne and other English resorts. Grand sea villas, hotels and convalescent homes took up the best sites along the cliffs and narrow valleys known as ‘chines’. The prime late Victorian example in the town is East Cliff Hall, now the Russell-Cotes Museum, built in 1897-1901 by a local architect, J. F. Fogerty, and carefully preserved as an eclectic Late Victorian interior and art collection.

Southampton became a major international port in the mid-nineteenth century with the opening of the London & Southwestern Railway’s terminus, concurrent with the digging of the first enclosed dock. Rapid development culminated in the gigantic White Star Dock, which remains as the present Ocean Dock. It was from here that Titanic sailed in 1912 and much of the crew was drawn from the city. For this reason there are numerous memorials to the lost in the city and surrounding area, notably The Engineer’s Memorial (1914) in East Park by Joseph Whitehead.

Some of the finest buildings addressing the sea in southern Hampshire rivers date from the mid-later twentieth century. The Mediterranean-influenced San Remo Towers at Boscombe (Bournemouth) of 1936-8 were designed by Hector O. Hamilton, an American architect who also competed for the design of the Palace of the Soviets. This type of apartment building, with hotel-standard services, was something new in England at this time. Even up to the recent past, the seaside setting inspires creative solutions for functional problems, such as the ‘Silver Dome’ designed by J. R. Mazaud which covers the incinerator buildings at Marchwood on the edge of Southampton Water.

You can purchase Hampshire: South here.

Charles O’Brien is joint series editor of the Pevsner Architectural Guides.
Bruce Bailey is author of the revised edition of Northamptonshire.
Nikolaus Pevsner was the series founder.
David W. Lloyd was co-author of the original volume for Hampshire and the Isle of Wight (1967) and author of Isle of Wight (2006).

The guide Hampshire: Winchester and the North is also available to purchase here.

Friday 8 May is the 70th anniversary of VE Day, the date that marked the end of the…