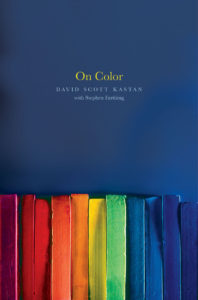 We live in a world of vivid colours and colour marks our psychological and social existence. But for all colour’s inescapability, we don’t know much about it. In On Color authors David Scott Kastan and Stephen Farthing offer a fresh and imaginative exploration of one of the most intriguing and least understood aspects of everyday experience. Kastan and Farthing, a scholar and a painter, respectively, investigate colour from numerous perspectives: literary, historical, cultural, anthropological, philosophical, art historical, political and scientific. In ten lively and wide-ranging chapters, each devoted to a different colour, they examine the various ways colours have shaped and continue to shape our social and moral imaginations. Each individual colour becomes the focal point for a consideration of one of the extraordinary ways in which colour appears and matters in our lives. We decided to put the spotlight on blue, which is discussed in chapter five of the book.

Into the Blue, notes from On Color

Abstract painter Wassily Kandinsky referred to blue in his theoretical writing Concerning the Spiritual in Art as a colour which ‘unfolds in its lowest depths the element of tranquility’. He went on to say that as it ‘deepens towards black, it assumes overtones of superhuman sorrow’. Because of the common association of blue with melancholy and sadness – evident in expressions such as ‘feeling blue’ and ‘being blue’ – it is tempting to think that this was always the case. It was not. The ancient Greeks considered blue ugly and barbaric while in the middle ages it was admired as the colour of heaven and precious jewels. In fact, the authors of On Color, tell us that it was only from the late fourteenth century onward that blue ‘has been the colour of dejection or despair’.

By the late nineteenth century, the word was used to denote a musical genre which was invented in the rural American South by ‘African Americans, the ex-slaves and sons and daughters of former slaves’. From the fields of the Deep South, this music of loss and longing reached the urban centres such as Memphis and New Orleans and the rest is history. From Miles Davis’ album Kind of Blue to Bob Dylan’s song Tangled up in Blue, ‘blue notes’ are now a familiar accord. 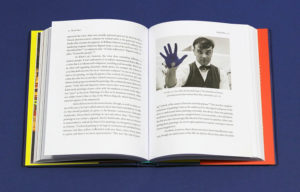 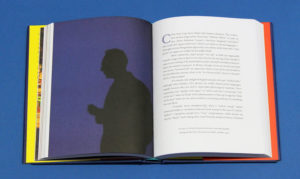 At the same time, the celestial quality of blue guaranteed its ambiguity. When Yves Klein decided to make a specific shade of blue – now called International Klein Blue – the subject of his art, it was because of its transcendental nature. ‘What is blue?’, he asked before answering the question: ‘Blue is the invisible becoming visible. Blue has no dimensions, it is beyond the dimensions of which other colours partake’.

The authors of On Color conclude the chapter about blue with an account about a film by Derek Jarman called Blue (1993). For the entirety of its seventy-nine minute duration, the film shows an unchanging screen in Yves Klein Blue accompanied by the soundtrack of words, music and sound effects. Jarman made the film as his health deteriorated and he lost his sight. He shared Klein’s fascination with blue as being infinite, remarking that ‘Blue transcends the solemn geography of human limits’.

There’s much more to know about blue. Find out in On Color, here.
Other colours featured in the book are red, orange, yellow, green, blue, indigo, violet, black, white and grey. Read an excerpt from the chapter on violet here.

David Scott Kastan is the George M. Bodman Professor of English at Yale University. He has written widely on literature and the arts in general. Among his many publications are Shakespeare and the Shapes of Time, Shakespeare after Theory, and A Will to Believe: Shakespeare and Religion. He is also one of the general editors of the Arden Shakespeare. Stephen Farthing is an artist, an elected member of the Royal Academy of Arts in London and an Emeritus Fellow of St. Edmund Hall, Oxford.

Paul Ginsborg’s Family Politics tells the story of the 20th-century through the lens of the family, examining key…