The Paston Treasure – one of the most enigmatic paintings in Western art – has come back home to the Norwich Castle Museum & Art Gallery from being on loan to the Yale Center for British Art in the US where it had a whole exhibition dedicated to it. For the first time in over three centuries, the painting and five of the original objects it depicts, were gathered together to tell the story of the collectors and their obsession for beautiful objects and the commission of the painting which is still unattributed and largely shrouded in mystery. The exhibition The Paston Treasure: Riches and Rarities of the Known World can be seen this summer in Norwich (23 June–23 September 2018). Read on for a discussion of the painting by Yale Center for British Art curator Nathan Flis.

The Paston Treasure:
A Painting that Reveals an Entire World while Concealing an Alchemical Secret
by Nathan Flis

The Paston Treasure is first and foremost a showpiece: a monument to a collection and a meditation on possessions. It is overstuffed with worldly goods – things that cannot be transported from this realm to the next or things that will not last, as we are reminded by the vanitas imagery that infuses the composition. Paramount are thirteen glittering vessels, most of them fashioned from exotic shells, including a conch from the West Indies, three nautilus shells (found on the slopes of coral reefs in the south seas) and three more made from the Indo-Pacific turban snail. These are all set in dazzling silver-gilt mounts teeming with sea gods and monsters, perhaps referring to the treacherous seafaring journeys these natural rarities made to reach European shores. 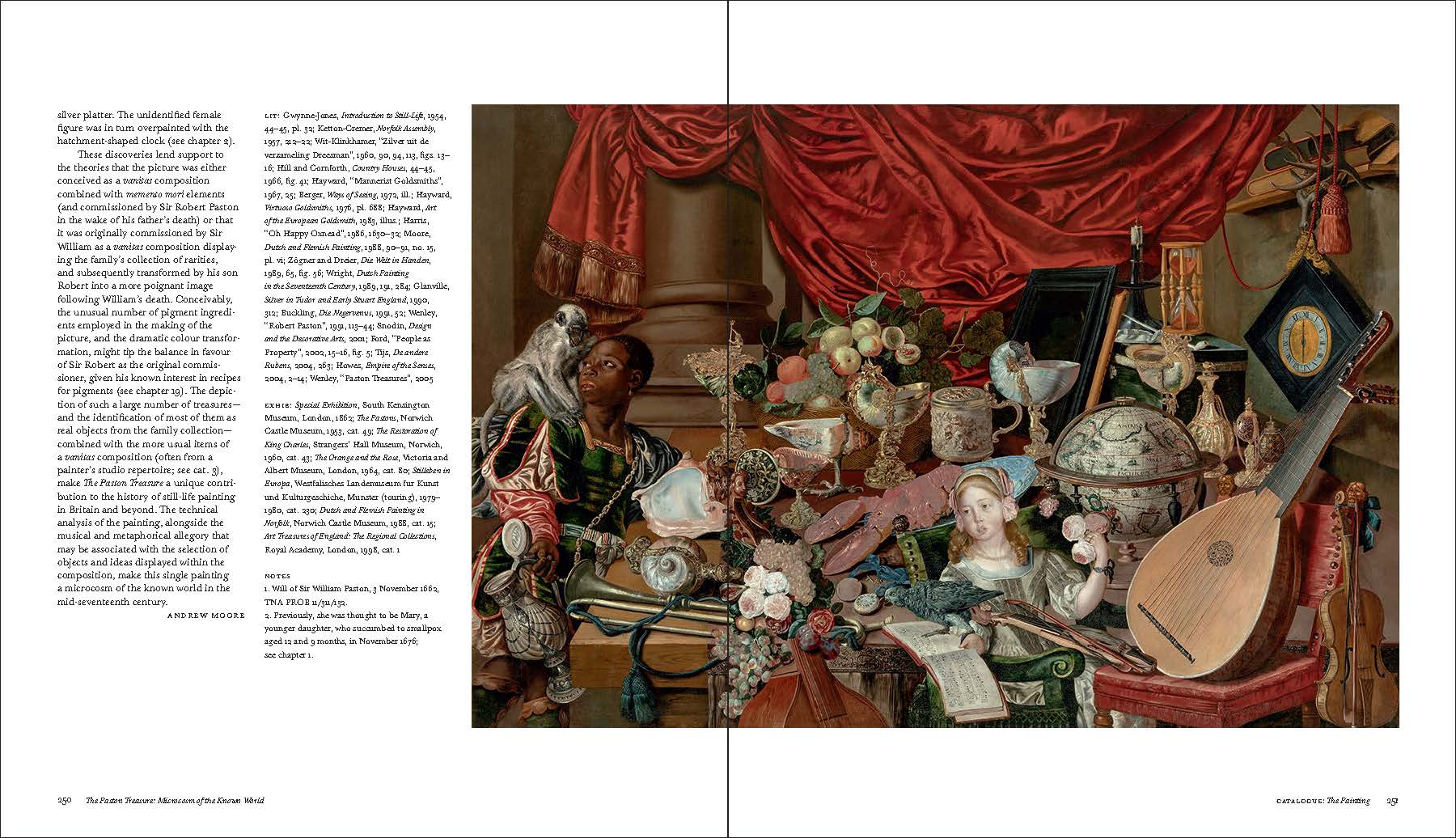 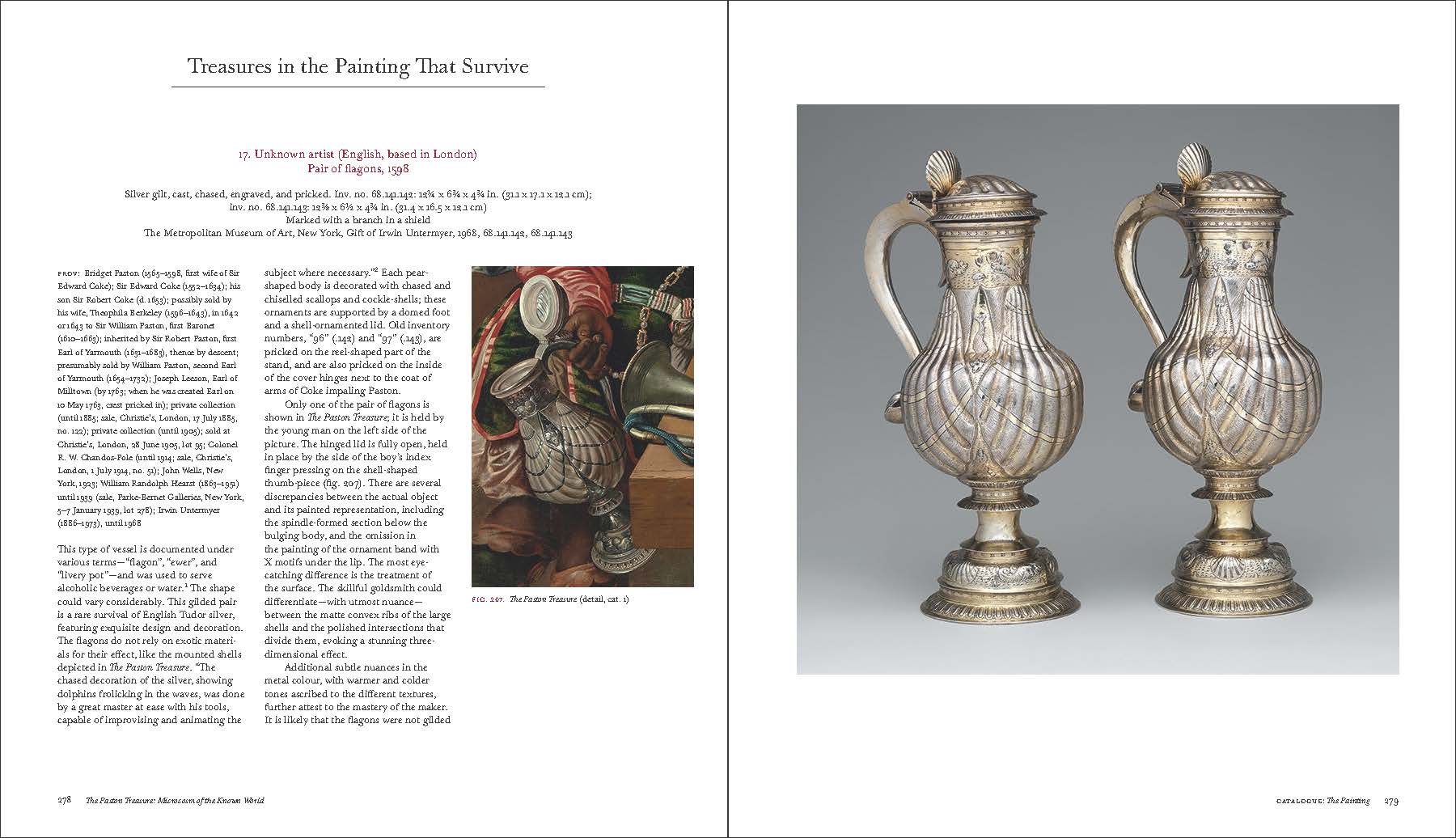 Travel is very much part of the conscience of the painting, as suggested by the prominence of the terrestrial globe which is turned to display the Pacific Ocean. If geography and the distance of travel are preoccupations, then so is time and the contemplation of generational continuity. At least two of the treasures depicted were more than seventy years old at the time of painting, having been passed down in the family. Items such as the silver flagon held by the young man (dating to 1598; the pair of flagons now at the Metropolitan Museum of Art, New York) and the nautilus cup of 1592 (Prinsenhof Museum, Delft) just in front of the ebony-framed mirror are juxtaposed with objects that were incredibly fashionable at the time of painting such as the Gujarati perfume flask with its silver-gilt mounts added in London in the 1660s (private collection). The fleeting nature of the shimmering treasures is further underscored when we realise that other treasures were seized from the family during the English Civil Wars and sold or melted down for cash to fund Cromwell’s war against Charles I. 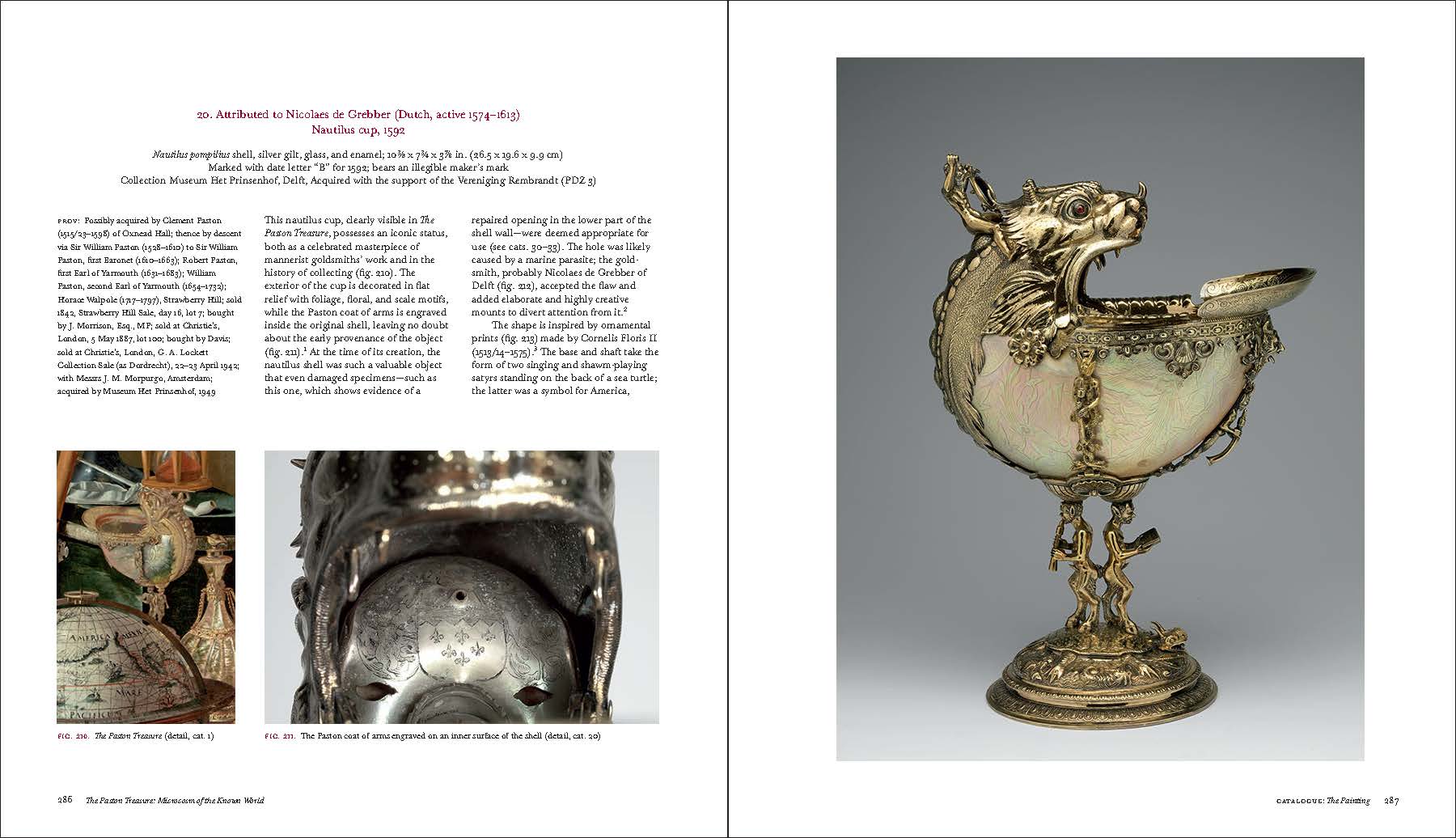 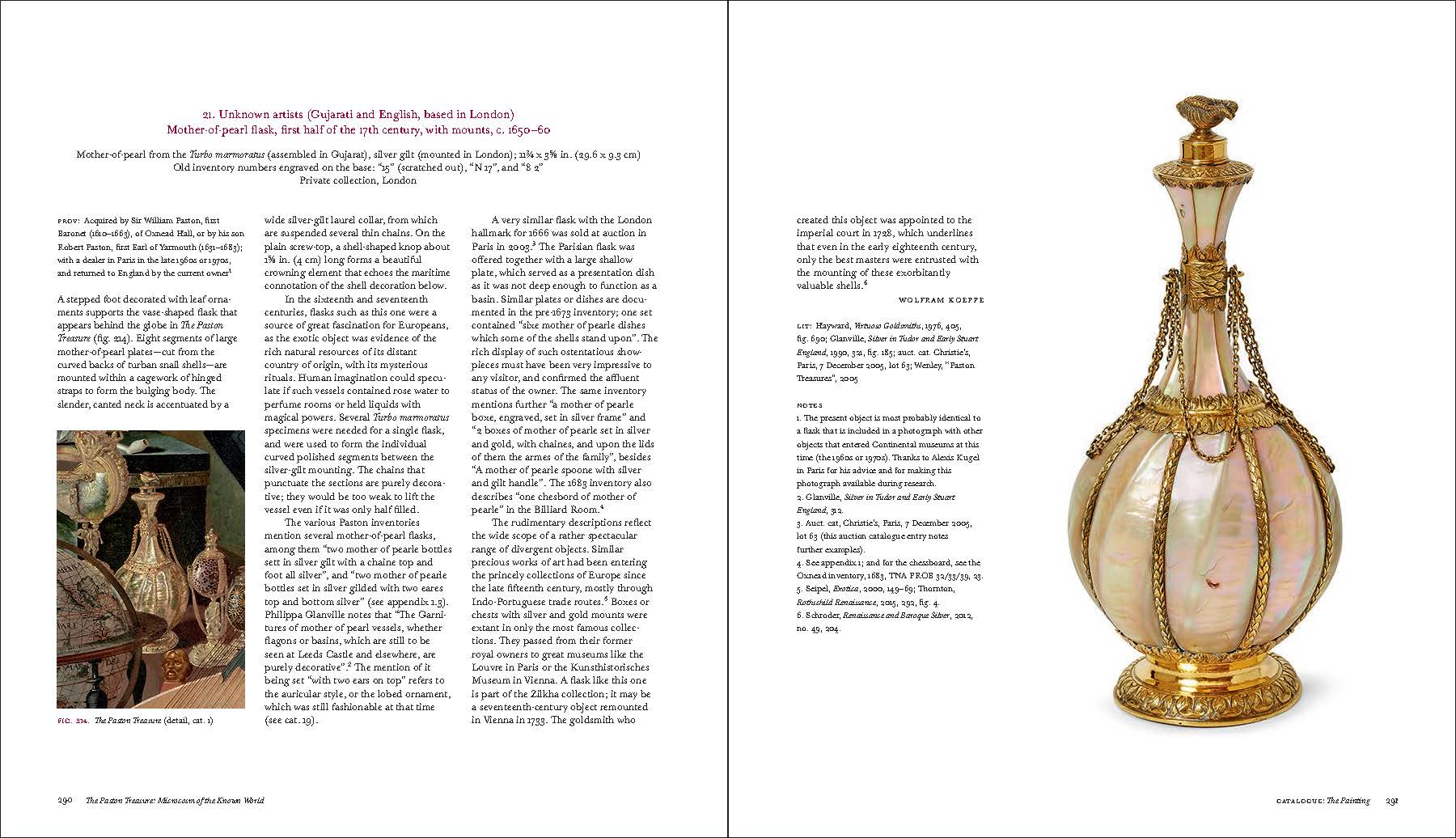 Sir William Paston, first Baronet (1610–1663), the primary collector in the story and one of the possible commissioners of The Paston Treasure, was famous in his time for his extensive travels. Following the death of his first wife, Lady Katherine, and spurred, it seems, by an insatiable curiosity he made an unusually extensive tour of Italy, Egypt and the Middle East in 1638–39. Upon inheriting Oxnead Hall in the same decade – it was originally built by his distant uncle, the infamous sea captain Clement Paston in the 1560s – William eventually transformed the Tudor house into an Italianate villa with classical sculpture and parterre gardens inspired by his journeys. His cousin, Thomas Knyvett, captured the atmosphere of the newly transformed Oxnead in a letter sent to his wife in February 1640, less than a year after Paston’s travels:

‘I have dispatcht this chimicall embassador to let thee knowe that I am passing well, but what I shall returne home I am a little doubtfull. One while we are Italians, Another while Tur’ks, by & by Egiptians, & eftsoones merry Greeks, but all very well and handsome … I might spend another week and not see all the rarityes. Indeed heer is a world of curiosityes & some very rich ones, as cabinets & Juells.’

William’s travels brought the world home and Oxnead’s transformation was so dramatic and complete that Knyvett did not know if he would escape without undergoing some kind of transformation himself. 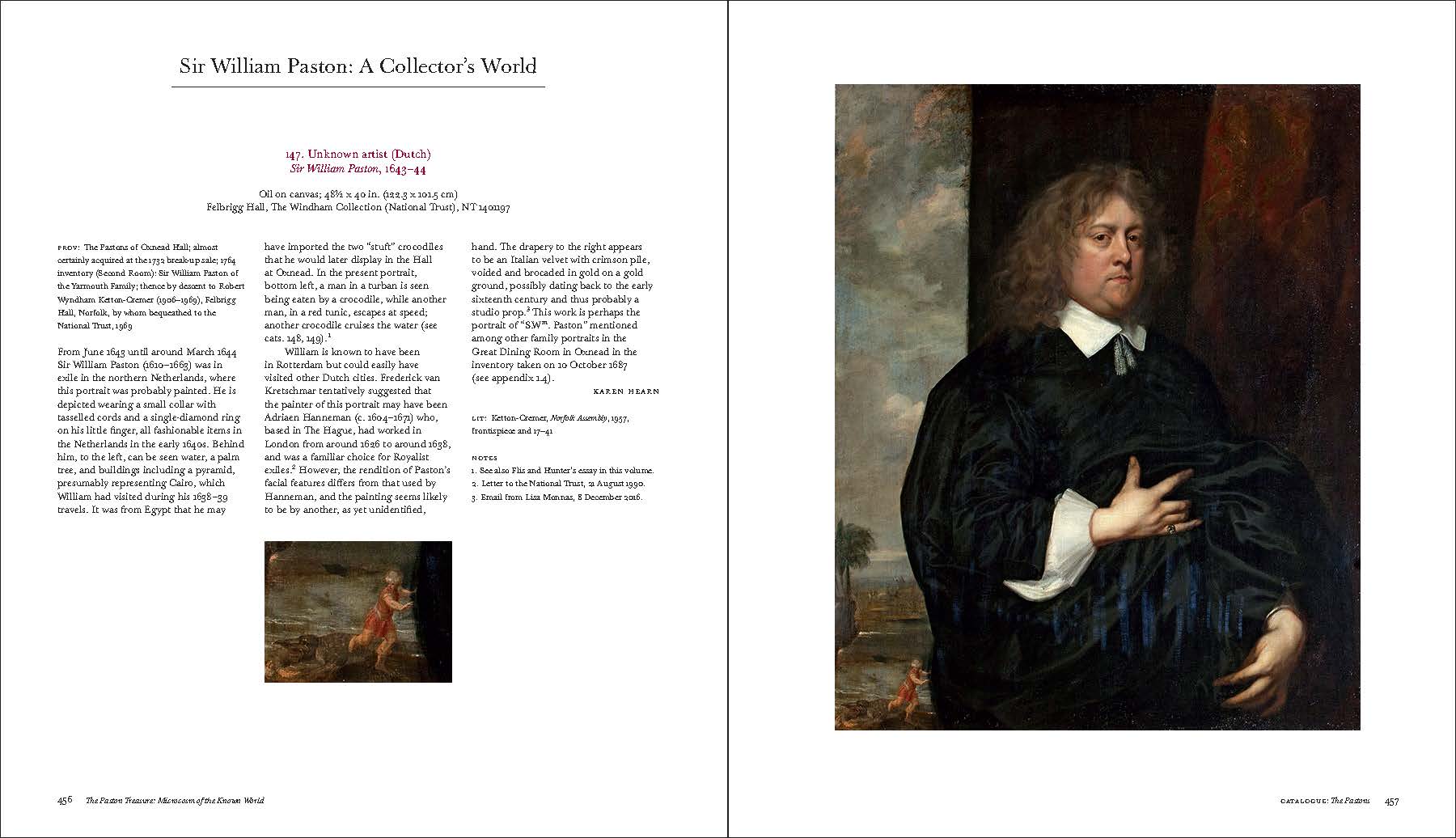 Although William took the opportunity to procure treasures, he did not simply travel to shop. He was a highly regarded patron of the arts and sciences and, to judge from his friendships with polymaths like Sir Thomas Browne of Norwich (1605–1682) and the reception he received from Ferdinando II de’Medici (1610–1670), Grand Duke of Tuscany, he was also part of a wider intellectual community known as the Republic of Letters and a collector of medical recipes. One contemporary describes, in a book dedication, William’s lifelong ‘diligent search into the greatest curiosities of Nature,’ and an anonymous poem that was posthumously dedicated to Paston takes his voyage to a more spiritual level, suggesting that his insatiable curiosity and search continue to this very day: ‘There is lacking in his treasure-house this one unique and everlasting gem: it is called eternal life. To purchase this, he sails under Christ’s auspices, to the market of the new Jerusalem’. 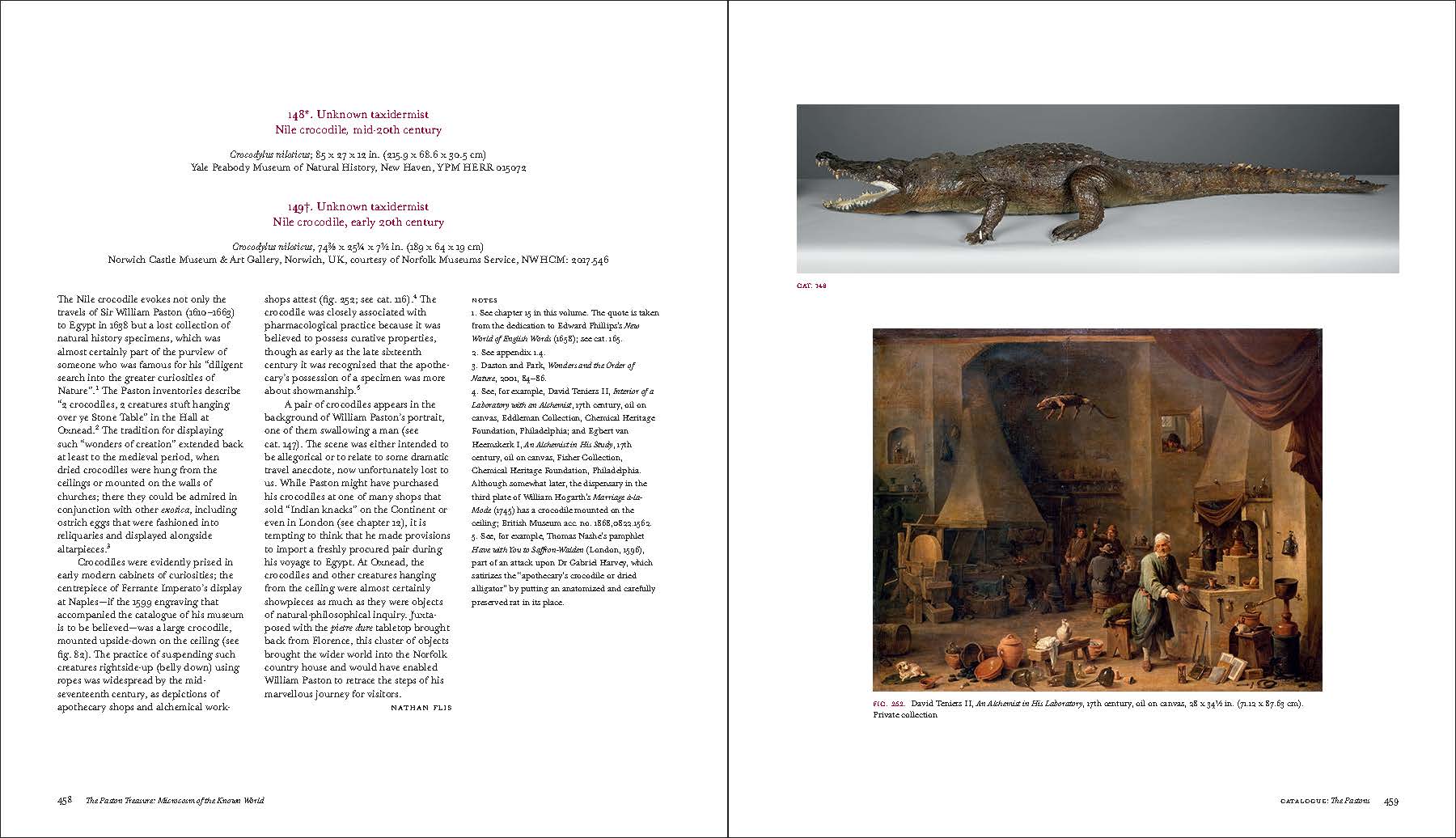 The exhibition ends with an evocation of the alchemical laboratory where William’s son, Robert Paston, first Earl of Yarmouth (1631–1683), a career politician by day – and a spendthrift like his father – attempted for more than twenty years to transform base metals into gold with the hope of to solving his family’s escalating financial woes. Robert is the other candidate for the commissioner of The Paston Treasure, the strange chemical composition of which suggests an alchemical experiment. In addition to recipes for the red elixir or Philosopher’s Stone (which enabled the transformation of base metals into precious ones) Robert’s gold-tooled, goatskin-covered alchemical notebook also contains notes on painter’s pigments. Pigment recipes alluded to Robert’s interest in the imitation of nature. Producing a substance that looked like gold allowed the alchemist to at least emulate the real thing. and the notebook contains recipes for imitating the colours of silver and gold as well as for gilding picture frames and coaches. Correspondence reveals that Paston was also engaged in making homemade vermillion and it is the pronounced fading of the once-bright vermillion of the lobster and other colour changes in The Paston Treasure that implicates Robert’s alchemical experiments in the unusual result. Knowing that the patron was breathing down the neck of the artist (hence the changes made to the painting, including the mysterious lady painted out of the top right corner), did he also introduce botched homemade batches of pigment into the painter’s palette? 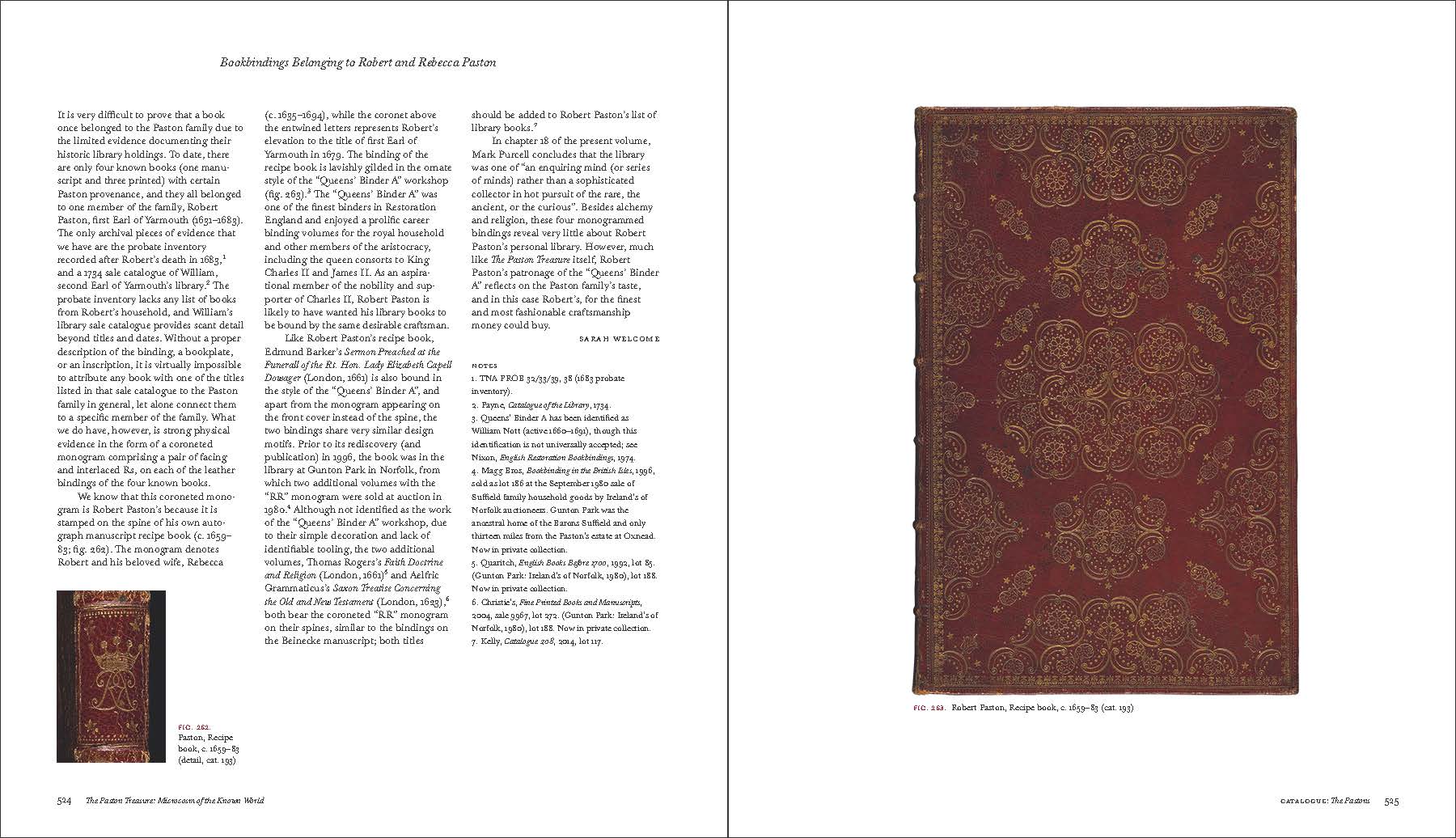 Remarkably, Robert’s notebook came onto the market in the years leading up to the exhibition and was acquired by Yale University’s Beinecke Library. In the exhibition at the Yale Center for British Art, Robert’s notebook is joined by that of his daughter, Margaret (the young lady believed to be depicted in The Paston Treasure), a largely pharmacological compilation that now survives at the Wellcome Library in London. In the 1670s, much to her parents’ chagrin, Margaret married Girolamo Alberti di Conti, the Venetian Resident in England; by the middle of the decade the couple immigrated to Venice and apparently Margaret didn’t look back. 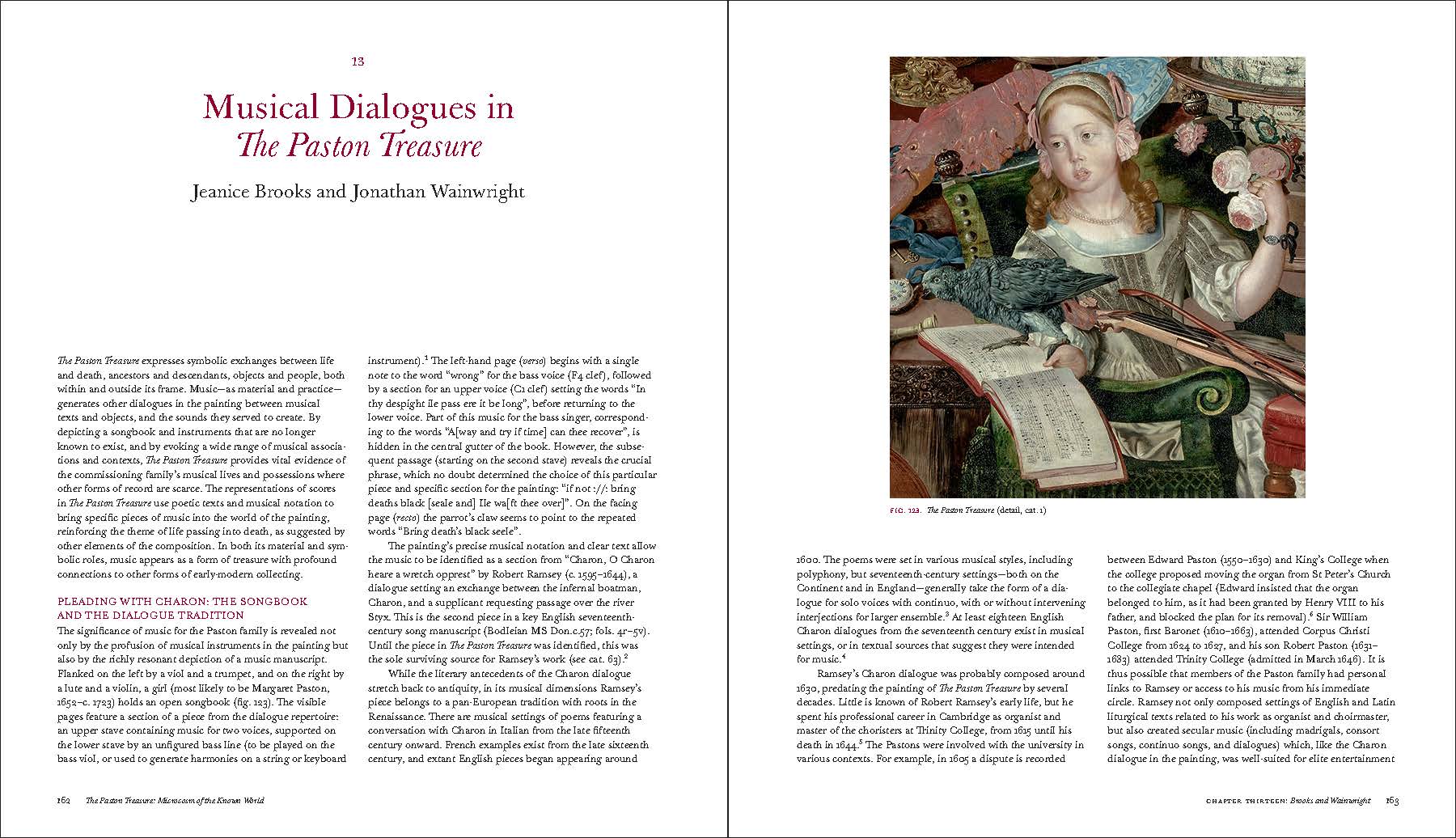 The Paston Treasure, detail of the girl (most likely Margaret Paston) with an open songbook

Margaret’s far more sophisticated alchemical practice, the work of her personal workshop in Venice, takes us beyond the failures of the father. Her manuscript shows her recollection for the way certain recipes were followed – albeit less efficiently – when as a young girl she assisted in the Paston laboratory back in England. She also recorded medical recipes acquired by her grandfather during his travels, including an antidote for ailments of the stomach purchased from a Florentine charlatan named Matteo Lucatelli. In light of her own alchemical practice, we come to see Margaret’s presence in the painting as reflecting her special significance not only as the eldest child of her generation and as the favourite granddaughter of Sir William (who left her an astounding dowry of £4,000 – ostensibly making her part of the treasure) but possibly also as a vessel for her father and grandfather’s secrets.

In the end, unsurprisingly, Robert did not succeed in his quest for gold and the family fortunes continued to dwindle. Only two generations after The Paston Treasure was painted, the splendour of Oxnead Hall disappeared like a mirage. Along with the house went the remains of the magnificent collection, its gradual dispersal necessitating the reunion of objects from across the world for the exhibition. More than fifty lenders have made the evocation of the original Paston treasures possible.

It is hoped that The Paston Treasure: Microcosm of the Known World will transform the way that viewers see the little-known painting with which the project starts and cast new light on art, science, politics and culture during the period from which the painting emerged. The accompanying publication (published by the Yale Center for British Art in association with Norfolk Museums Service and Yale University Press) represents the collective work of 41 international contributors; its 589-page, generously illustrated bulk would not have disappointed the ever more acquisitive Pastons. 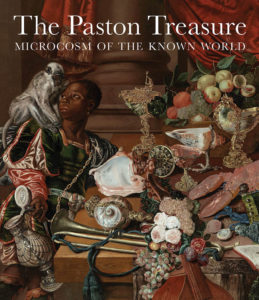 Watch a special film The Paston Treasure: A painting Like No Other narrated by Stephen Fry to find out about the recent technical analysis performed on the painting and the new research answering some of the riddles that have puzzled generations of scholars.

The exhibition The Paston Treasure: Riches and Rarities of the Known World opens on 23 June at the Norwich Castle.

Bookshop of the Month – Barbican, London

A very happy new year to all of our readers! We’ll be continuing our tour around the fabulous…