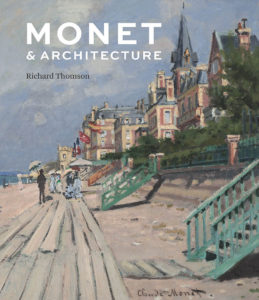 The new exhibition Monet and Architecture opens at London’s National Gallery on 9 April. It’s been nearly twenty years since a Monet show was hosted in the UK – and there has never before been an exhibition looking at Monet’s career through the buildings he painted in Rouen, Paris, London and Venice. From humble structures in villages, to some of Europe’s most famous monuments, Monet painted the architecture of his time – modern, historic, simple and grand. This new way of looking at Monet’s work shows how he used architecture to create his compositions, both in his most famous paintings and also in lesser-known works.

We spoke to Richard Thomson, curator of Monet and Architecture and author of the accompanying catalogue, about how the exhibition shows us something new about one of the world’s best-loved artists.

Richard Thomson on curating the exhibition Monet and Architecture

Yale: Why take the theme of Monet and architecture?

Richard Thomson: Many Monet exhibitions have been based on particular periods in his sixty-year career. By taking the representation of architecture in his work, we approach his work in a new way. Architecture is considered very broadly, of course, to cover many aspects of the built environment, from historic buildings such as the Houses of Parliament or the Doge’s Palace to modest village housing or railway bridges. The aim is to explore the very different ways in which Monet used buildings in his paintings, which he did with remarkably diverse results over half much of his career. One wants to encourage the viewer of the exhibition and the reader of the book to see how there are fresh ways to look at these marvellous paintings and to appreciate Monet’s work more deeply.

Yale: Was Monet using architecture only as a compositional device, for example, to show scale, frame a scene, or was it more important than that?

Richard Thomson: Buildings could fulfil various functions in Monet’s paintings. Above all, he was a painter, so pictorial instincts and decisions were to the fore. Buildings could serve as a regular shape within the irregularity of nature, or make a chromatic contribution in a landscape, for instance a red roof against green foliage creating a complementary contrast. Sometimes Monet used a building as a strong, solid form which served as a screen on which light played, as in the Rouen Cathedral series exhibited in 1895 or the Venice pictures shown in 1912. Of course, buildings were also records of particular locations. This meant not only that Monet engaged with particular sites and structures; it also inferred that the spectator would also recognise them, thus creating a bond between artist and his public. In addition, modern architecture acted as a measure of modernity, so when Monet painted the suburban villas and bridges around Argenteuil or the Gare Saint Lazare in the 1870s he was setting himself up as a painter of very recent structures. Finally, his canvases subtly suggest how buildings can evoke mood in a landscape, whether it is the lonely customs officer’s cottage on the Normandy cliffs or a view across the Seine to the village of Vétheuil where his first wife lay in the cemetery.

Yale: Is there a period when Monet painted architecture more or did he represent it consistently throughout his career?

Richard Thomson: Monet used architectural elements in his paintings for almost half a century, from the beginning of his career in the mid-1860s to the exhibition of the Venice paintings in 1912. After that he devoted himself to the Water-lily canvases and buildings scarcely feature in the very last decade or so of his work. Monet’s landscapes include buildings sporadically but consistently; after all, they are a mark of the human presence in nature. That said, there were phases of work in which architecture was central – the Gare Saint Lazare group of 1877, for instance – and other campaigns in which it hardly features at all, such as his work on Belle-Ile in 1886. When it comes to the relationship between modernity and architecture, Monet represented new construction during a relatively short phase of his career. The Universal Exhibition of 1867 encouraged him to paint some canvases of modern Paris and three years later, at Trouville, he painted the hotels and villas of a newly developed seaside resort. Through much of the 1870s, he depicted the bustle of modernity in the great Norman ports of Rouen and Le Havre, the Parisian suburbs, or central Paris itself. After the paintings of the flag-filled streets celebrating the 1878 Universal Exhibition his interest in the modern city more or less evaporated. Of course, he had three extended campaigns painting London, in 1899, 1900 and 1901, culminating in an exhibition staged in 1904, but in these canvases the city is typically veiled in fog and pollution, so one might say that the modernity is less architectural than atmospheric.

Yale: How does Monet’s representation of architecture help us see his paintings afresh?

Richard Thomson: One thing I have tried to point out is how Monet was instinctively conscious of the ways humans read landscape. Perhaps the modern viewer has forgotten, or takes for granted, what is implicit in the use of buildings in his landscapes. For example, a church spire would identify a particular place, differentiating it from another place with a church tower. The size of the spire would give a sense of distance and thus the time it would take to arrive there. Monet’s paintings implicitly use architectural features to engage the spectator with landscape as habitat, offering information about identity, distance and time.

Yale: How does Monet’s use of architecture relate to that of his contemporaries? Did other Impressionists engage with it?

Richard Thomson: Monet’s Impressionist contemporaries all used buildings in their work. They painted the modern city – Renoir also taking on Parisian subjects in 1867 – and used the facilities available in the burgeoning tourist culture to explore distant places. Berthe Morisot painted on the French Riviera before Monet did, and Renoir in Venice almost three decades before his friend. Another crucial binding element was the tradition of the picturesque, rooted in France since the 1820s and articulated through illustrated texts. This encouraged people to look at France’s architectural past, at cathedrals, churches and castles, and Monet grew up with an eye for picturesque motifs, which one can find as early as his 1864 canvases of Honfleur and which lingers in the Rouen Cathedrals made thirty years later.

Richard Thomson is Watson Gordon Professor of Fine Art at the University of Edinburgh.

You can buy the hardback edition of the National Gallery London’s exhibition catalogue for Monet and Architecture here.

Adam Phillips’ Becoming Freud is a biography that explores the life of the young Freud, spanning his first fifty years,…