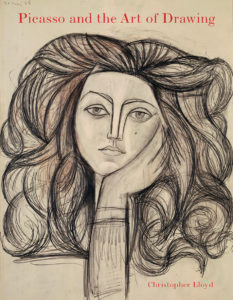 In his new book Picasso and the Art of Drawing, Christopher Lloyd sets out to interpret the lifelong achievement of Picasso (1881–1973) as a draftsman. Previous publications about Picasso’s drawings have tended to focus on particular periods of his career. In this stunning new volume Christopher Lloyd takes a wider view, examining how drawing can be seen as the vital thread connecting Picasso’s art, and also linking his private world with his public persona – of which he was becoming increasingly aware in later years. Picasso and the Art of Drawing ultimately showcases how the basis of the titular artist’s style as painter, sculptor, printmaker and designer was manifestly achieved through drawing.

Picasso and the Art of Drawing:
An Interview with Christopher Lloyd

This transcript is an edited extract from an interview Christopher Lloyd gave to The Hedgehog & the Fox at our London office. You can listen to the complete interview here. Christopher  begins by talking about the emergence of Picasso’s talent in youth. According to the artist’s mother, Maria, when little Pablo first spoke it was to ask for a pencil – and there were certainly a lot of them lying around, because his father, Jose Ruiz, was a professor of art and also a painter.

The Hedgehog & the Fox: Picasso once asserted that he had never done children’s drawings: ‘never’, he claimed, ‘even when I was very small’. Was this an example of Picasso’s myth making or had he really sprung forth fully formed as an artist?

Christopher Lloyd: He did not start off a prodigy, although the family projected a myth after he was established that he was some kind of prodigy. We can see from the multitude of early drawings, that he went through all the stages of academic training, beginning at Malaga and then in Corunna, and then in Barcelona. He becomes more liberated when he goes to France. One of the most interesting aspects of his early draftsmanship is his ability to come to terms very quickly with that academic tradition. He took it on board very rapidly and became very proficient and skilful in it. But, at the same time, he saw it as a way to escape. He was using it like a trapeze artist: it was something he could bounce off but he always respected it. That is the most important thing. He insisted on the importance of drawing as a discipline and that is why he continued to draw throughout his life. Having said that, his early drawings are very, very good. There is some juvenilia but the drawings themselves are extraordinarily convincing exercises in how to draw the nude, for example.

The Hedgehog & the Fox: Picasso had his first exhibition of drawings in 1919. In previous centuries drawing had simply been subservient to painting but Picasso comes along when drawing is beginning to be taken more seriously. There are also different media available to artists which was not the case before. Can you say something about what was available to him to make a drawing and about the status of drawing?

Christopher Lloyd: The tradition from the Renaissance onwards was that drawing was a preparatory exercise, moving towards a finished painting or sculpture. The drawings were just stored away in the studio or deposited on the floor or even thrown away. Certain drawings were kept because they were presentation drawings or portrait drawings but, on the whole, it was a preparatory exercise. This began to change in the second half of the nineteenth century, particularly in France with the arrival of Impressionism, and it was in France that the academic tradition had had its stranglehold since the seventeenth century. So, with the Impressionists beginning to look at life around them, life in flux and in movement, painting became a less convincing way of doing this. Painting stopped being the only way – drawing could do it as well. This coincided with not so much emphasis on pencil and accuracy and fine paper but with a much more liberal approach to the use of materials and instruments. The softer media – chalks, charcoals, gouache, tempera, particularly pastels – became more open for artists to use and more available commercially. Also, artists were not afraid to use different supports: their hands wandered from paper onto cardboard or onto canvas and onto tracing paper, so there was a feeling of breaking out, of liberalism in drawing. That was the breakthrough from the 1860s through to the end of the century.

Drawings were more readily exhibited alongside paintings. They were mounted and framed and so they looked like paintings. Drawing became autonomous and equal in status to painting. Dealers, of course, relished this because the production was much quicker and drawings were more saleable in many respects. So everybody was pleased. It was in Barcelona that Picasso really broke out with his drawings. His first exhibition took place in 1900 the cafe Els Quatre Gats and it was a series of portraits in what we now call mixed media. Picasso did them in charcoal and chalk but with watercolour and touches of gouache. They were just pinned to the wall; some sold and some did not. By 1919, he was well established and the first major exhibition of Picasso’s drawings was organised by Paul Rosenberg in his Galerie de l’Effort Moderne in Paris. After all, a great breakthrough in modern art that was Cubism happened before that in 1906.

The Hedgehog & the Fox: Can you say something about drawings exploratory role in Picasso’s development of Cubism?

Christopher Lloyd: It was a severe intellectual exercise. How do you look at an object in the round? How do you put that down in two dimensions? Introducing the fourth dimension – time – looking at the back of something as well at the front and the sides and putting all that down, was an extremely complex matter. This is why Cubism went through various phases ending with my favourite, the papiers collés. It was a decisive moment because instead of just using chalk and pencil and watercolour, suddenly to come and stick a piece of paper or a ticket or a programme or a menu as part of the composition gave drawing another extra element. It was a prodigiously intellectual moment to think of drawing in this three-dimensional way. And, in fact the, reason why Cubism lasted such a short time was that it was so difficult to do, to sustain that level of intellectual achievement, that ludic quality of deceiving the eye, of drawing the viewer in to the picture, the complexities of it, without putting them off totally.

Picasso was terrified that his cubist drawings would be rather abstract and would seem to be just for those in the know and not have a wider appeal. He was terrified of that and in fact the reaction against it very much comes in the next decade, the decade of the Ballets Russes from 1917 and into the 1920s. Then after that, he went into what is called the neoclassical phase, where the pure line came back. Picasso was a chameleon, he was very gymnastic in all of this. He would explore a style thoroughly, add it to his armoury and then go on and do something else. He never wanted to be trapped in one particular style, but helped each style develop new styles in turn. That is why he was the complete artist in all the disciplines of art.

Christopher Lloyd is an independent scholar and curator and previously served as Surveyor of The Queen’s Pictures in the British Royal Collection until his retirement in 2005.