‘Keep the Corean pot in memory.’

With those words, the great potter Bernard Leach imparted one of his most treasured possessions to another great potter, Lucie Rie, in February 1947. The object in question was a Moon Jar – so named for its whiteness and nearly perfect round shape – which Leach had purchased at a Seoul antique shop in 1935. It was made at some point during the Choson Dynasty, and would in its own day have been seen as an emblem of purity and completeness. For Leach and Rie, it would have had those associations too. But it also became an emblem of their own personal connection, one grounded in mutual professional respect, and infused with deep feeling.

For Simon Olding, Martina Droth and myself – editors of the book Things of Beauty Growing: British Studio Pottery, and curators of the exhibition that it accompanies – the Moon Jar has also come to seem emblematic. Our subject is the handmade clay vessel, a topic humble enough, but one that opens up far-reaching cultural vistas. Of particular resonance for us has been the idea of historical return. Through their own acts of making, figures like Leach and Rie built pathways back into history. To them, the Moon Jar functioned symbolically as the repository of tradition, what Leach often called the “taproot” that links present and past. For Rie in particular, it would also have seemed a quintessentially modern object. With its just off-center spherical shape and subtly discolored milky glaze, it could be understood as a precursor to abstraction, humanized rather than diminished by its slight irregularities.

Leach had originally given the Moon Jar to Rie for safe-keeping during the war. We learned from a previously unpublished letter, now in the collection of John Driscoll (the most important private lender to our exhibition), that the two potters’ relationship had become so close that, although apparently entirely platonic, it was unwelcome to Leach’s wife at the time, Laurie Cookes. Reluctantly, Leach agreed to a “complete severance” from Rie, writing to her, “that is repellant to me and gives me a sense of disloyalty and shame, but it may be the only thing left—I think it is.” It was in this context that he asked her to remain the steward of the Moon Jar, a reminder of the bond between them.

This anecdote may seem remote from the traditional concerns of ceramic history, which have to do with style, technique, and cultural inheritance. Most pots in most museums – including the Moon Jar itself – must remain anonymous. We will never know the names of their makers, much less the details of their intimate lives. In taking up the subject of studio pottery, my colleagues and I were interested to reflect on this quality of cultural representativeness, the way that a Sung Dynasty vase might stand for classical China, a teabowl for Japanese aesthetics, a mass-produced teaset for modern Britain. We were also interested in understanding how individual makers addressed such ideals of national identity in their work, adopting conventional forms and then restating them in their own singular terms.

The story of the Moon Jar seemed the perfect anchor for our project, not just because of its serene beauty, and its connection to two of the century’s great potters, but also because of its potential for reimagining. The object’s story by no means stopped in the 1940s; it now resides in the British Museum, and was the subject of an important show at the Korean Cultural Center in London in 2013. Contemporary makers like Akiko Hirai, Adam Buick and Gareth Mason responded to the historic Choson pot as if it were a film screen, on which they could project their own visions.

Our decision to reprise the Korean Cultural Center show (with the addition of a further artist, Nao Matsunaga) may seem a little unusual. Curators rarely repeat one another’s work. Yet this seemed to us appropriate, not only because of our concern with the theme of repetition and variation, but because of the nature of the Moon Jar itself. Like the waxing and waning of the celestial object it resembles, this artifact has long come in and out of focus, serving as the anchor for a remarkable swirl of cultural currents. It was made, perhaps as long as four hundred years ago, as a simple storage jar, a container for staples like rice and pickled cabbage. Curiously, that is the function it has performed since – holding within itself the means of sustenance not just for the body, but the mind and spirit.

Glenn Adamson is a Senior Research Scholar at the Yale Center for British Art. The ‘Things of Beauty Growing’: British Studio Pottery exhibition is organised by the Yale Center for British Art in partnership with The Fitzwilliam Museum, University of Cambridge, and co-curated by Martina Droth, Deputy Director of Research and Curator of Sculpture at the Center; Glenn Adamson, Senior Research Scholar at the Center; and Simon Olding, Director, Crafts Study Centre, University for the Creative Arts, UK. The organising curators at The Fitzwilliam Museum are Victoria Avery, Keeper, and Helen Ritchie, Research Assistant, Department of Applied Arts. The exhibition was on display at the Yale Center for British Art from 14 September to 3 December 2017. It will be on view at The Fitzwilliam Museum from 20 March to 18 June 2018. 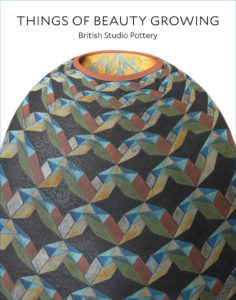