This year, we’re delighted to be publishing Terry Eagleton‘s tenth work with Yale, Radical Sacrifice, a weaving and cross-cultural examination of sacrifice from ancient times to present day. Furthermore, we’ve reissued his bestseller Why Marx Was Right (with a stunning new jacket) to mark the 200th birthday of Karl Marx.

Here’s a run down of all ten of Eagleton’s books from Yale, with a whole host of reasons why you should add them to your to be read pile… 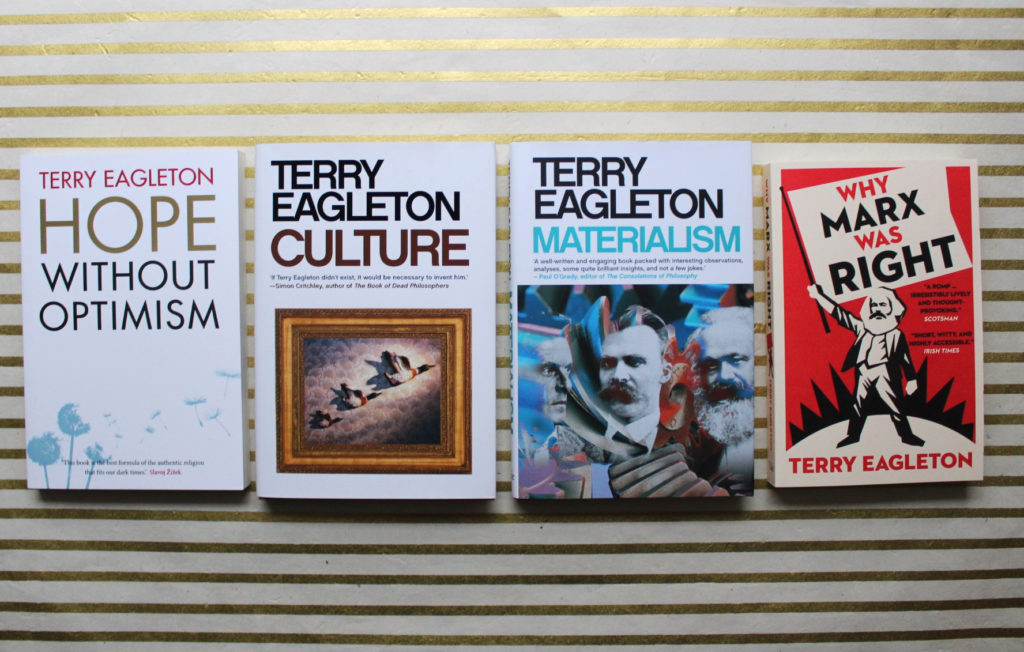 Why Marx Was Right

Why should I read this? A lot of political ideology past and present stems from Marx. Even if you don’t fully agree that he was right, he’s still a figure to understand from all angles. This is a short and accessible read for those who want to dig further into the politics of Karl Marx.

What do other people think? ‘Terry Eagleton takes on some of the most common objections to Marxism and answers each in turn, in a clear, non-technical and often humorous way.’– London Review of Books

Why should I read this? Culture is an intrinsic part of being human. But ever wondered what ‘culture’ really means? Can you pinpoint where culture begins and where it ends, if not for you, for everyone? Terry Eagleton can help with that.

What do other people think? ‘Eagleton’s central notion, that culture is the ‘social unconscious,’ is beautifully delineated. He gives us a seamless journey from Marx, through Nietzsche and Freud, to Burke, Herder, Wittgenstein, T.S. Eliot and Wilde, but at the same time takes in popular idioms, in a hugely satisfying marriage of ‘high’ and ‘low.’ Reflection at a level we used to take for granted among scholars but is now all too rare.’ – Peter Watson, author of The Age of Nothing: How We Have Sought To Live Since The Death of God

Why should I read this? Would you count being materialistic as a weakness? Or just a characteristic? Terry Eagleton provides a brilliant introduction to the philosophical concept of materialism and its relevance to contemporary science and culture.

What do other people think? ‘He has lost neither his bracing self-certainty nor his caustic sense of humour… Eagleton’s central argument is straightforward and suggestive.’ – Josh Cohen, New Statesman.

Why should I read this? If you’ve ever been hopeful for something, you’re probably aware that it’s a complex emotion. Is it the same as optimism, or desire, or cheeriness or idealism? Eagleton unpacks the emotion, in a thoughtful and humorous way.

What do other people think? ‘Frequently insightful…written with a characteristic mix of erudition and colloquialism.’ – Priyamvada Gopal, Times Higher Education Supplement 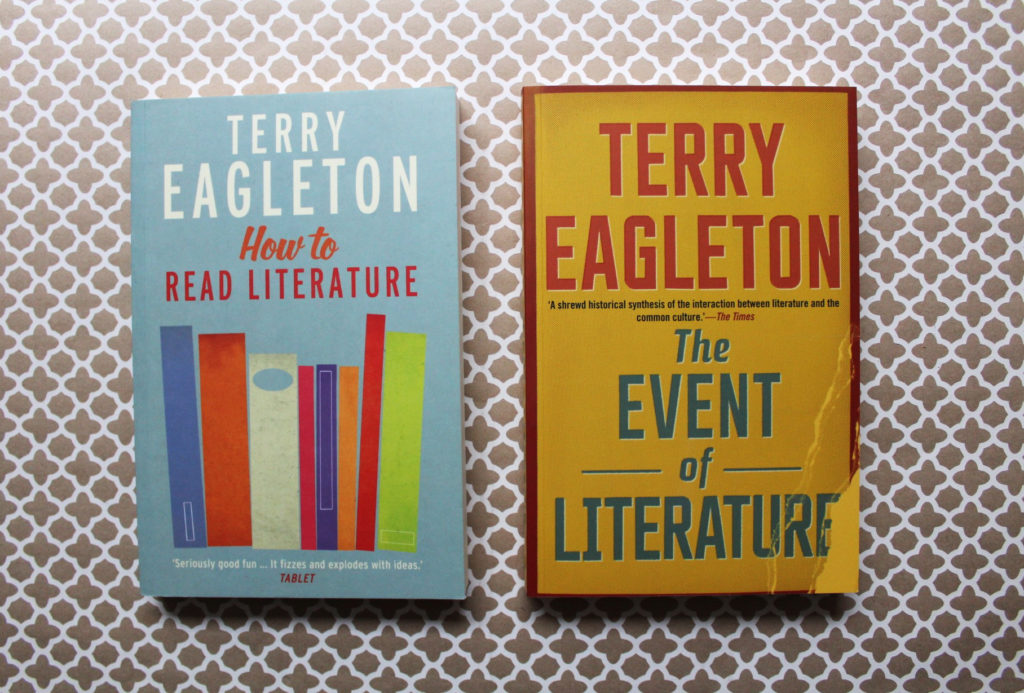 How to Read Literature

Why should I read this? What makes a book good or bad? What interpretations can you make from written word, and where should these interpretations stop? Eagleton accessibly explores these question of literature, and will support you to to deepening your understanding and enrich your reading experiences.

What do other people think? ‘You don’t have to be either teacher or beginner to relish it: Eagleton is so full of enthusiasm that you just need to be able to read. His canvas is broad. He is unafraid of tackling anything, from ‘Baa Baa Black Sheep’ to ‘Lycidas’, and he is splendidly unpompous.’ – Sue Gaisford, Tablet.

The Event of Literature

Why should I read this? If you’re a budding reader, and you are keen to unpack the ideas around literature as a concept, this is one for you. Eagleton turns his attention to the questions we should ask about literature, but rarely do. What is literature? Can we even speak of ‘literature’ at all?

What do other people think? ‘Written with his characteristic wit, verve and insight, The Event of Literature marks a new chapter in the developing thought of our pre-eminent literary theorist.’ – London Review of Books 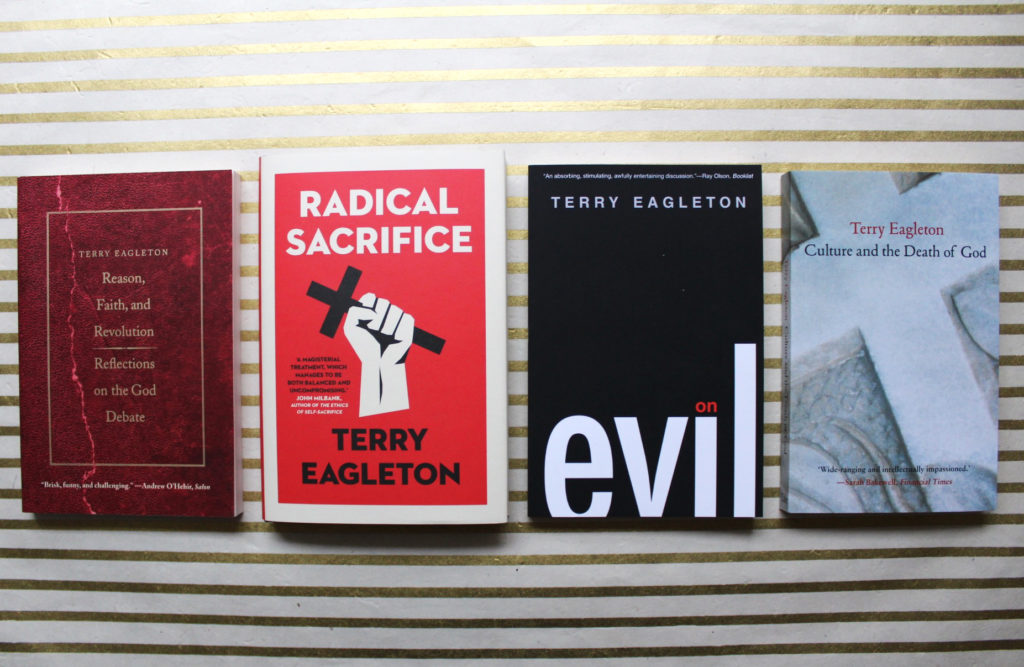 Why should I read this?  Tackling a difficult idea with his trademark erudition, Eagleton pursues the thorny concept of sacrifice through the history of human thought, from antiquity to modernity, in religion, politics, and literature.  He casts off misperceptions of barbarity to reconnect this most radical of ideas to politics and revolution.

What do other people think? ‘Even those who may not accept Eagleton’s view of sacrifice will inevitably enjoy the intellectual tour de force he presents and benefit from his stimulating engagement with a huge variety of texts and thinkers.’ – Johannes Zachhuber, co-editor of Sacrifice and Modern Thought

Why should I read this? We use the concept of evil as a way to understand the dark aspects of human behaviour, but is there a scale? And how might we meaningfully categorise something as ‘evil’? Does it even exist?  Drawing on literary, theological, and psychoanalytic sources Eagleton argues that evil is a real phenomenon with palpable force in our contemporary world.

What do other people think? ‘Terry Eagleton, in his jaunty and surprisingly entertaining book on the subject, takes the unfashionable view that such a thing as evil does exist…His argument is subtle, intricate, provocative and limpidly expressed.’ – John Banville, Irish Times

What do other people think? ‘A tour-de-force survey of the changing relation of culture and religion.’ – Publisher’s Weekly

Why should I read this? Are you an atheist, or a theist? Or somewhere in between? Reflecting on the ‘God debate’, Terry brings a rejection of both sides, and offers his own vibrant account of religion and politics.

What do other people think? ‘A gloriously rumbustious counter-blast to Dawkinsite atheism… paradoxes sparkle throughout this coruscatingly brilliant polemic… Eagleton is stronger on reason than Ditchkins, for he thinks carefully about what his opponents say… This is, then, a demolition job which is both logically devastating and a magnificently whirling philippic. It is easy to see why a lot of people will not be happy with this book. Much of what it says is too true.’ – Paul Vallely, The Independent

Our Bookshop of the Month this month is the beautiful Kemps General Store, which was founded in 2017…