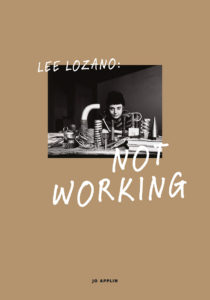 To mark the upcoming publication of her new book Lee Lozano: Not Working, we asked Jo Applin to tell us more about controversial American artist Lee Lozano, and how to interpret the eccentric conceptual pieces she produced as she withdrew into self-imposed exile.

This is the first in‑depth study of Lee Lozano’s idiosyncratic ten‑year career in 1960s New York, assuring this important artist a key place in histories of post‑war art. The book charts the entirety of Lozano’s production during this period, from her raucous drawings and paintings depicting broken tools muddled up with genitalia and other body parts to the final exhibition of her spectacular series of abstract ‘Wave Paintings’ at the Whitney Museum of American Art in 1970. 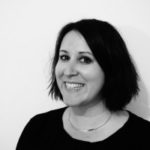 Yale: Who is Lee Lozano and what does she mean to you?

Jo Applin: Lee Lozano was an American artist active in New York during the 1960s, whose career was cut short in 1970 when she decided to drop out of the art world for good, followed shortly afterwards by her decision to boycott other women. I first encountered Lozano’s work in an exhibition of feminist art in America, titled ‘Wack! Art and the Feminist Revolution’. On show was one of Lozano’s large abstract monochrome paintings, and the textual ‘write-up’ of a conceptual art work Lozano undertook in 1969 when she went on strike from the art world for several months, dubbed General Strike Piece, as a kind of precursor to her later Dropout Piece. I was intrigued by these strikingly different works—one an abstract, minimalist painting, and the other a politically charged conceptual art work consisting of handwritten text on graph paper, and decided to find out more. It was only later I discovered that Lozano was not only an important abstract painter and conceptual artist, but that she was also the producer of numerous pop-like drawings and paintings of body parts and tools, often joined together in funny, sexually suggestive (and explicit!) arrangements. I was also lucky enough to be able to spend a lot of time in Lozano’s archive, reading through her numerous notebooks. The more I researched, the more I found myself drawn to Lozano’s fierce determination, her troublesome, idiosyncratic politics and outrageous sense of humour.

Yale: Throughout the book you relate Lozano to other artists working in the 1960s and 1970s in New York. How was Lozano part of this scene?

Jo Applin: It was important to me that I situate Lozano within her contemporary milieu, instead of presenting her as an isolated artist working outside of the mainstream or as some kind of renegade figure. Lozano was intimately involved in the contemporary art scene, and friends with many of the decade’s most well known artists, including Hollis Frampton, Carl Andre and Richard Serra. She was a huge admirer of Agnes Martin’s spare, grid paintings, although her relationship with the abstract painter Jo Baer was more contentious, yet Lozano’s ongoing dialogue with both of these painters can be seen in her final series of abstract ‘Wave Paintings’ (1967–1970), which were exhibited for the first time at the Whitney Museum of American Art. It was also important to me that the book shine a light on the work of other women conceptual artists who have similarly been overlooked—in many instances, almost entirely—in favour of an all-male roster of names. By putting Lozano in relation to Adrian Piper and Agnes Denes I wanted to draw attention to the particular kinds of conceptualism in which they engaged, placing equal emphasis on the role of text and language and the idiosyncrasies of the body in all its lived, material and messy forms. This goes as much for her drawings of broken down, soft tools, household items and body parts, as it does her cooler, conceptual language pieces. Placing Lozano alongside more surprising figures, such as Warhol superstar Brigid Berlin and the Italian art critic and feminist Carla Lonzi, was another means to think about Lozano from a different perspective. 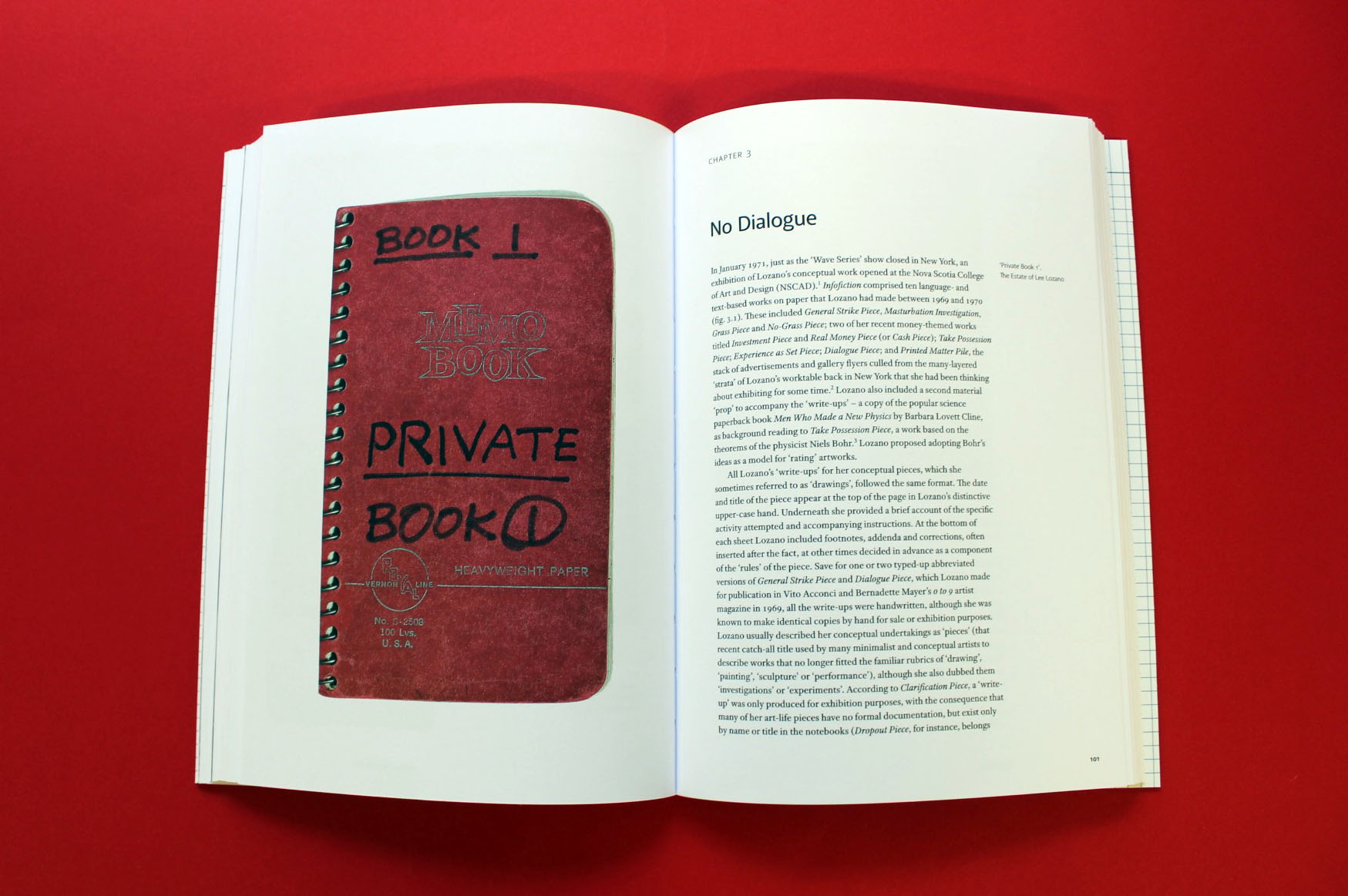 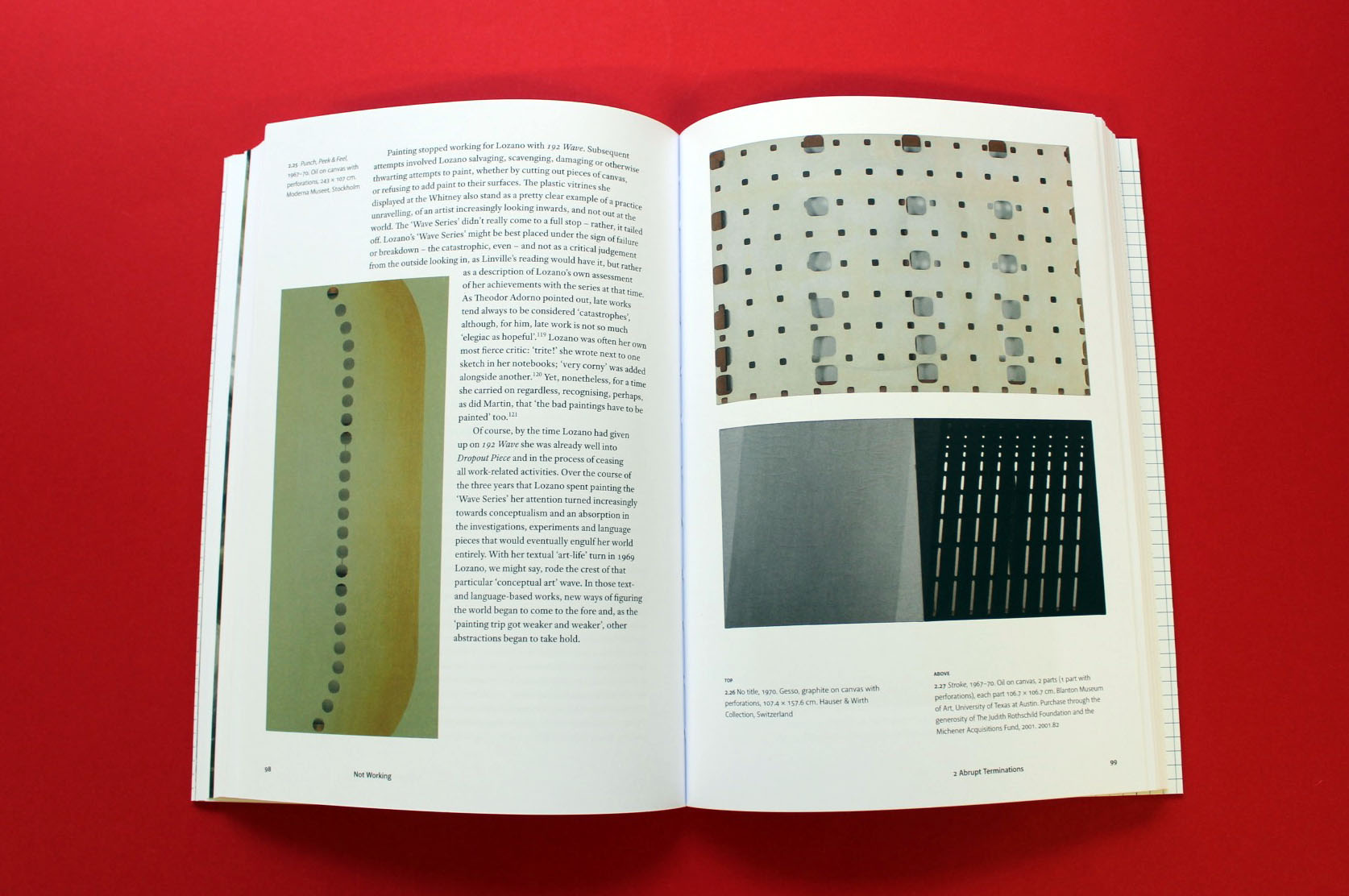 Yale: The thread that you draw through Lozano’s work is the concept of not working – of failures and impasses in her art, both deliberate and perhaps unintended. What’s right about things going wrong?

Jo Applin: One of my chief aims was to think holistically about Lozano’s career, rather than discuss her drawing, painting, and conceptual practices as discrete entities that don’t relate to one another. I wanted to emphasize how closely interrelated all of her various art-making activities were. For me, the thread connecting her drawings, paintings, conceptual ‘art-life’ practices and final decision to ‘dropout’ was Lozano’s ongoing investigation of, and actual encounter with, the idea or the problem of work and failure. In particular I wanted to think about Lozano’s fascination with the ways in which people, as well as tools, objects, and systems appear, to be working but also not working. Lozano embraced failure as much as success, seeing it as a productive, generative means of working, living, and thinking about the world. While I am not so sure Lozano would have agreed, I do think something of that logic of failure was at work in her practice, particularly in the moments of breakdown and impasse that she readily acknowledged in her notebooks. Lozano was as likely to document how a work had gone wrong or in some way failed—appeared not to be working—as she was to focus on those works that in her eyes succeeded. This was especially true of works such as Dialogue Piece (1969), in which Lozano charted a series of conversations with other people, noting not only those that had worked, but also those that did not work out as hoped.

Yale: What can the complex kind of feminism that you attribute to Lozano tell us about feminism today?

Jo Applin: One of my aims with this book was to claim Lozano for feminism, which I realize is something of a conundrum given Lozano’s own, outspoken refusal to join the women’s movement with statements such as ‘I am not a feminist’. But I wanted to focus on Lozano’s fierce determination to think seriously about sexuality and gender even as she refused to toe any one political line. Of course, Lozano wasn’t the only artist—or woman—who expressed unease with the women’s movement in the late sixties and early seventies, which for many threatened to marginalize their work and individual achievements. Important writers such as Joan Didion also voiced concern about the women’s movement in 1972, while in 1970 the artist Eva Hesse would declare that ‘excellence has no sex’. I wanted to situate Lozano within that broader, intellectual debate, even as I discuss her in relation to the emergence of radical feminism and those so-called feminist ‘misfits’, such as Valerie Solanas, who is famous for shooting Andy Warhol, but was also, in the late sixties, author of the outrageous and outraged SCUM Manifesto (which stood for the ‘society for cutting up men’). I relate Lozano to other artists, including Martin, Baer and Hesse, who refused the label ‘feminism’ but whose contributions we might now want to take seriously in debates around sexuality, feminism and gender.

The battle between the individual and group, or collective, is perhaps one aspect of Lozano’s complex feminism that continues to chime with our times. Thinking critically, out loud—speaking the unspeakable—has to be part of any serious political conversation, and I discuss Lozano’s decision to go on strike and dropout in relation to the philosopher Hannah Arendt’s writing on the politics of participation in The Human Condition (1958). Lozano’s discomfort at joining any group—whether it be the New York art world or the women’s movement—speaks volumes to her own commitment to thinking through issues on her own terms as itself a political act. I was excited by Lozano’s brave and bold insistence on thinking hard and seriously about complex issues, even when her conclusions seemed to many beyond the limits of respectability. I’m less concerned with retrospectively aligning her interests straightforwardly with the women’s movement than I am with attending seriously to what her actions and decisions—to drop out of the art world, to stop talking to other women—might tell us now about how we think our relationship to intersectional, differing feminisms today.

An exhibition of Lee Lozano’s works – Slip, Slide, Splice – opens at The Fruitmarket Gallery in Edinburgh on 10 March 2018.

Jo Applin is a lecturer of modern and contemporary art at The Courtauld Institute of Art, London.

Lee Lozano: Not Working is available from the Yale UK website here.

Veiled Presence: Body and Drapery from Giotto to Titian

Veiled Presence: Body and Drapery from Giotto to Titian elucidates the symbolism of veils and highlights the power of…