An extract about Gluck’s life

Hannah Gluckstein (who called herself Gluck; 1895–1976) is one of our Remarkable Women of Yale University Press books which we are celebrating on the occasion of the 2018 International Women’s Day. Gluck was a trailblazer of gender fluidity who opposed social conventions as early as the 1930s. By refusing to be addressed in a gender-specific way – Gluck insisted on being addressed as ‘Gluck, no prefix, suffix or quotes’ – the artist expressed a strong will to define herself by her own standards which permeated every aspect of her life. Gluck adopted an androgynous look and entered into relationships with society florist and decorator Constance Spry, married socialite Nesta Obermer and the first female reporter in the House of Lords, Edith Shackleton Heald.

‘Gluck’s stylized and severely masculine appearance always attracted as much attention as her similarly elegant paintings and is rightly given equal weight in a superbly illustrated collection of essays.’ – Peter Parker, TLS ‘Books of the Year’

Gluck was a distinctive, original voice in the early evolution of modern art in Britain. This handsome book presents a major reassessment of Gluck’s life and work, examining, among other things, the artist’s numerous personal relationships and contemporary notions of gender and social history. Gluck’s paintings comprise a full range of artistic genres—still life, landscape, portraiture—as well as images of popular entertainers. Financially independent and somewhat freed from social convention, Gluck highlighted her sexual identity, cutting her hair short and dressing as a man, and the artist is known for a powerful series of self-portraits that played with conventions of masculinity and femininity. Richly illustrated, this volume is a timely and significant contribution to gender studies and to the understanding of a complex and important modern painter. The book accompanies the exhibition Gluck: Art and Identity at Brighton Museum, which was curated by Martin Pel and Amy de la Haye. The exhibition can be seen until 11 March 2018. It is part of Wear it Out, a partnership with The Centre for Fashion Curation at London College of Fashion.

‘Gluck was the carefully constructed identity of Hannah Gluckstein, a significant modern British artist who shocked society by appropriating masculine dress and demeanour and who loved women, who chose to adopt this abbreviated version of the family name possibly to obscure the gender of woman ascribed at birth and to mask religio-ethnic identity. Gluck lived through multiple pseudonyms relative to people and places. In a professional capacity Hannah was known simply as Gluck; to family members Hannah became Hig; to Nesta Obermer, the love of Gluck’s life, it was Tim; Edith Shackleton Heald called Gluck Grub; and in a sole instance of being painted by Romaine Brooks it was Peter.

Since the late twentieth century, Gluck has been positioned as an important figure among writers of LGBTQ+ (a widely used acronym for lesbian, gay, bisexual, transgender and queer) lives. The life the artist cultivated in the early part of the century has in the twenty-first century become, to a greater or lesser extent, socially acceptable. However, the look that Gluck pioneered in the 1920s still appears resolutely modern and, nearly a century later, continues to confront gender norms, inspiring the appearance of LGBTQ+ individuals and broader fashion trends.
Gluck was born in north London into an affluent Jewish family who owned the J. Lyons & Co catering empire (established in 1894), which included the chain of Lyons Corner House tea shops (first opened in 1909). Gluck’s mother was a talented opera singer and Gluck, who inherited her fine voice, initially trained to follow in her footsteps. In adolescence, however, Gluck sought a different path in life. Strong-willed and cushioned by familial wealth, Gluck defied expectations to marry and have children, and enrolled at art school to pursue a career as an artist.

In 1916, Gluck moved to Cornwall with Craig (Miss E. M. Craig) who liked to be known by her masculine-sounding surname and who is believed to have been the artist’s first lover and two fellow art students. Today little is known about Craig, but her influence upon Gluck’s early life should not be overlooked – not least Hannah Gluckstein’s subsequent adoption of a neutral name. Indeed, Gluck loved to relate the tale of how they ‘ran away’ together to become artists and regarded this as a major life-changing event. As Nesta Obermer (1896–1984; artist and socialite) recalled some sixty years late, ‘running away, about which she was obsessional, was the biggest thing in her life, and she not only told every new acquaintance about tis at once, but put it clearly in a biographical sketch which she completed, had typed out, and xeroxed and distributed lavishly.’

‘From 1926 the artist exhibited at the Fine Art Society (FAS), a prestigious gallery on London’s New Bond Street. A further three shows were staged in 1932, 1937 and 1973, and a posthumous exhibition was held in 1980. […] Gluck’s later exhibitions coincided with the emergence of a new history movement that foregrounded ‘hidden histories’, including those of LGBT+ lives. In 1982 the women’s publishing house Virago reprinted Radclyffee Hall’s germinal lesbian love story The Well of Loneliness (1928; it became the subject of a highly publicised obscenity trial when first published), in which the protagonist dressed as a man and wanted to be known as Stephen. For Virago’s reprint, Gluck’s double portrait Medallion (1936) was chosen as the cover image. This painting, referred to by Gluck as ‘YouWe’, portrayed the artist’s all-consuming love for Nesta Obermer and was painted to mark what Gluck considered to be the occasion of their marriage.’ 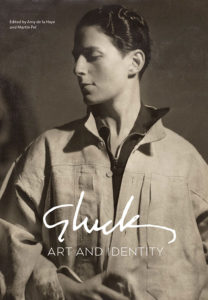 Amy de la Haye is professor of dress history and curatorship at London College of Fashion and joint director of the University of the Arts Centre for Fashion Curation.

Martin Pel is curator of fashion and textiles at the Royal Pavilion and Museums, Brighton and Hove.

Find out more about the book and the exhibition it accompanies in our image gallery.

You can purchase Gluck: Art and Identity here.

Pevsner Highlights and a look ahead

The Pevsner annual newsletter is now available online. Read on for Pevsner highlights from 2015, as well as…