‘She found herself facing the question of whether to commit suicide or to undertake something wildly crazy.’ – from Life? or Theatre? by Charlotte Salomon

Charlotte Salomon was a German Jewish artist who died at Auschwitz in 1943 aged twenty six. During her brief life, she created one of the most complex modern artworks which she called Leben? oder Theater? or Life? or Theatre?.

In this interview art historian Griselda Pollock introduces Charlotte Salomon and the Theatre of Memory, a study of this extraordinary German-Jewish artist who is finally being recognised for the masterpiece she created.

Griselda Pollock, professor of the social and critical histories of art at the University of Leeds, offers an enlightening and overdue re-evaluation of Charlotte Salomon, which is the result of twenty years of dedicated research.

Life? or Theatre? is a cycle of 769 paintings, characterised by a variety of painterly modes, from detailed vignettes on a single page to freely painted fields of colour with barely established figures. Charlotte Salomon referred to her work as ‘my book’ and signed it with her initials, CS, hiding both her gender and her Jewish ethnicity.

Charlotte Salomon was born in Berlin in 1917 and trained as an artist during the mid-1930s. Following Kristallnacht in November 1938, she had to flee to the South of France to stay with her grandparents. Thanks to the generosity of an American friend, Ottilie Moore, who enabled Salomon to live by herself between summer 1941 and early 1942, she was able to produce over a thousand paintings during a period of uninterrupted creativity.

Salomon was forced to go into hiding again in February 1943, but before she left, she entrusted the paintings to a local doctor. Seven months later, now pregnant, she was captured by the Gestapo and transported to the holding camp of Drancy, near Paris. From there she was sent to Auschwitz, where she was murdered.

Professor Pollock challenges previous presentations of Salomon’s work as a largely autobiographical narrative of a tragic young woman. Instead, she provides a substantial art-historical analysis of Life? or Theatre? which claims for Charlotte Salomon her place alongside other major figures of twentieth-century modernism, demonstrating why this artwork is a significant artistic and cultural monument of that period. 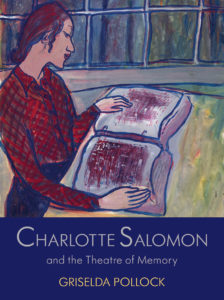 All images courtesy of The Charlotte Salomon Foundation and The Jewish Historical Museum, Amsterdam.

With winter firmly behind us, we thought we’d take a stroll through our Yale spring reading favourites, with a…