Mustafa Dikeç’s Urban Rage: The Revolt of the Excluded explores unrest in contemporary urban communities. Using examples from all over the world, Dikeç argues that urban uprisings stem from inequalities across social and ethnic divides that are still found in many urban societies.
One such uprising in August 2014 was sparked by the fatal shooting of Michael Brown, an 18 year old black man, by Darren Wilson, a white police officer in the US city of Ferguson, Missouri. The extract below explores the context of what happened that summer.

‘But they didn’t’, she said, ‘happen to you because you were white. They just happened. But what happens up here . . . happens because they are coloured. And that makes a difference.’

If you arrived in Ferguson by South Florissant Road, you would probably find it difficult to match it to the image that made Ferguson’s name both nationally and internationally. Ferguson, you would see, has its wine bar, cigar lounge, local brewery and Italian bakery, all conveniently located along this commercial road – not quite the image of a run-down city devastated by riots; more of a quaint suburban community. You might think, as I did, that either they fixed everything up very quickly, or else it was just a big fuss over nothing, all the while wondering where the black citizens of Ferguson were.

Walking north on South Florissant, you would start seeing signs of the incidents once you have passed the building that houses both Ferguson’s police department and its municipal court. Signs of damage, however, are not many. There are few boarded-up businesses, and one of these is a law firm that specializes in traffic law. Once we have understood the workings of the police department and the municipal court, we will see that this was not a random choice.

Across the street from the police department and the municipal court is a curious store called ‘I Love Ferguson’, with black letters and a red heart instead of ‘love’. This is where you buy your ‘I Love Ferguson’ memorabilia – hats, T-shirts, coffee mugs and signs that you also see displayed on many of the shopfronts on South Florissant Road. If you are a foreigner, a push pin marks your country on the world map hanging above the guestbook. As the lady keeping the store explains, the store was set up after the uprisings, and the revenue it generates goes to businesses that suffered damage during the incidents. When asked why people revolted, her smile gives way to a concerned look, and she says, nodding with her chin, ‘Well, they put all the Section 8 housing there.’

There are, it turns out, two Fergusons, and the other one is farther east. This second Ferguson feels more contained and compact, and it is clearly separated from the first one by West Florissant Avenue, a commercial strip that bore the brunt during the uprisings. The houses in this part of Ferguson are of two kinds: single family houses and apartment complexes. The gardens are well kept, houses are maintained; you can see it is not a particularly wealthy neighbourhood, but not a run-down one either. The area with the apartment complexes is where Michael Brown was killed. It is one of the most concentrated areas of poverty in the region, because these apartment complexes are home to Section 8 renters, recipients of rent aid vouchers who are by definition poor. Northwinds Apartments, where Brown lived, has 438 housing units, and it is one of the largest in the region. It is followed by Park Ridge with 336 units. There are also Canfield Green Apartments, Versailles Apartments and Oakmont Townhomes, all concentrated in this eastern tip of Ferguson, where the population is practically all black.

The Section 8 voucher system allows people to choose where they want to live by providing rent subsidies rather than units in designated projects. In theory, this system could reduce segregation and concentration of poverty by increasing the options available to the poor by allowing them to rent in the private housing market. In practice, however, voucher users get concentrated in certain areas for four reasons. First, the federal government sets an upper limit for rent, which also limits the areas for the use of vouchers. Better areas have higher rents, which prevents the use of vouchers in these areas and pushes Section 8 renters to less desirable neighbourhoods where rents are lower. Second, housing provision for vouchers is scant as landlords do not want to deal with poor tenants and the bureaucracy that comes with the voucher system. Third, landlords who are willing to have Section 8 renters offer units in poorer areas, which aggravates the problem of concentrated poverty. And finally, zoning laws that deliberately restrict rental housing, as we find in St Louis and elsewhere, further reduce opportunities for these tenants. The majority of Section 8 renters are thus highly concentrated and segregated in low-income neighbourhoods like this eastern tip of Ferguson.

St Louis is among the most segregated metropolitan areas in the United States, not least because of its history of racially segregative public policies, ranging from zoning decisions to public housing projects. Although blacks were the majority in its inner-city neighbourhoods for decades, the suburban colour line began to shift after 1970. Whites, who had already left the inner city, started fleeing the inner suburbs as well. This process, bluntly referred to as ‘ghetto spillover’ by a local observer in 1981, changed the population dynamics in inner suburbs such as Ferguson. Until the mid-1960s, Ferguson was a ‘sundown town’: blacks came in during the day to work as housekeepers and nannies, but were banned from the city after dark. The city even barricaded through streets and made sure most of the others dead-ended before reaching Kinloch to the west, a neighbouring all-black suburb, then quite exceptional in St Louis.

But the demographics of Ferguson changed in the following decades. While the black population increased from 25 per cent in 1990 to 67 percent in 2010, the white population decreased from 74 percent to 29 per cent – a change, as we will see, that has not been reflected in the city’s administration and police force. Increasing poverty that hit other metropolitan areas hit St Louis and its suburbs as well, and Ferguson saw its poor population double between 2000 and 2012. One in four Ferguson residents lived below the poverty line in 2012. This suburbanization of poverty was not unique to St Louis. During the 2000s, suburban poverty not only increased, but also concentrated in certain neighbourhoods in almost every major US metropolitan area. This partly had to do with the dismantling of public housing projects and the shift to the voucher system. Coupled with a trend in inner-city revival and gentrification, as we will see with Cincinnati below, these shifts pushed inner-city poor out to the suburbs.

One particular aspect of this growing poverty is geographical: American poverty is expanding and moving from the inner city to the suburbs. In 2000, most of the poor lived in the country’s major cities … In 2000, St Louis metropolitan area was second (after Atlanta) nationwide in the share of metropolitan poor living in the suburbs, with 69 per cent of its poor in suburbs. In 2008, the ranking remained the same, but St Louis’s share of metropolitan poor living in suburbs went from 69 per cent to 75 per cent. In 2008, in other words, three-quarters of its metropolitan poor lived in suburbs.9 Inner-city revival projects displaced the poor, while housing vouchers concentrated poor families in already segregated areas like the apartment complexes in the second Ferguson. This new geography of American poverty, then, is not merely a product of private prejudice or preference, but of public policies, from the local to the federal. Ferguson is not some aberrant case, but a product of policy choices that have been transforming the economy and cities over the past decades. The formation of segregated and concentrated areas of poverty like the second Ferguson is a result of urban policies that eliminated affordable housing in inner cities and concentrated recipients of rental aid – who are poor by definition – in the inner suburbs.

This broader context allows us to understand why we have two Fergusons. When he was stopped by a white police officer, Michael Brown was walking back to Northwinds, one of the Section 8 apartment complexes in the area. Northwinds has been owned by the Maine-based Eagle Point Companies since 2005. As the president of the company said, there is ‘a lot of turnover’, and some of their residents cannot pay the rent. An investigation of law enforcement practices in Ferguson may explain why they could not afford the rent, or, even if they could, why they would be tempted to leave. No one, it seems, loves Ferguson in this part of the city, not enough at least to display a sign of affection. There is not a single ‘I love Ferguson’ sign in the second Ferguson, but plenty that read ‘We must stop killing each other’. Let us see how law was enforced in Ferguson, the self- affirmed ‘community of choice’. 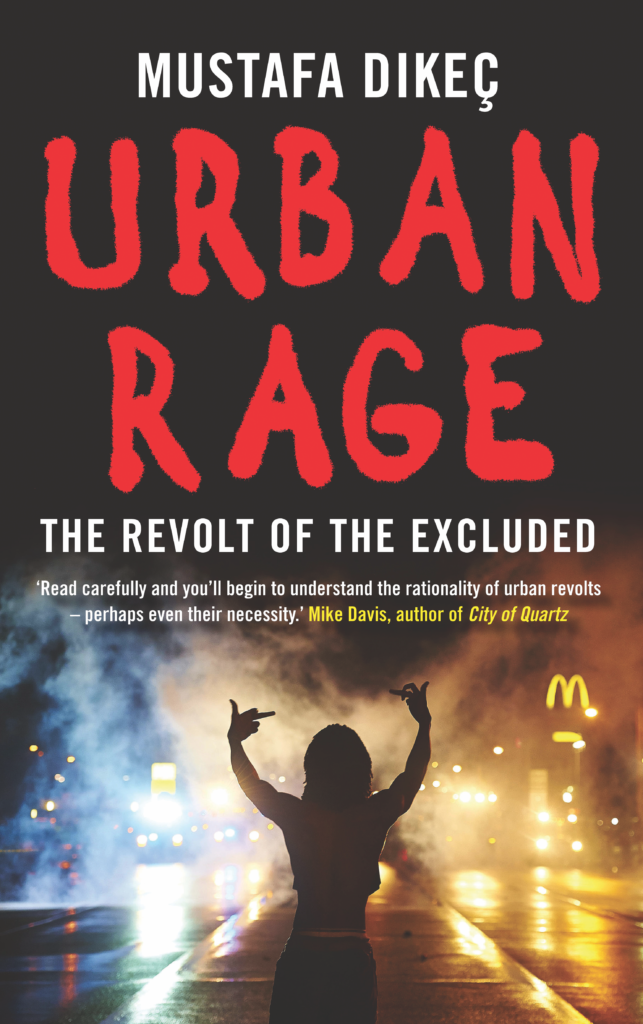 Mustafa Dikeç is professor of urban studies at the Université Paris-Est and Malmö University. He is the author of Badlands of the Republic and Space, Politics and Aesthetics. He lives in both Paris and Malmö

With the holidays upon us and the weather turning colder, November and December offer plenty of opportunity for…