It has been 500 years since Martin Luther nailed his 95 theses to the door of the Castle Church in Wittenberg. Scott H. Hendrix, author of Martin Luther: Visionary Reformer, provides a brief introduction to the life of Luther, exploring his work and why he is considered such an influential figure in 15th and 16th century religious scholarship.

Martin Luther (1483/84-1546) was a German Augustinian friar, a talented scholar, and a professor of theology at the university at Wittenberg in northern Germany. In 1517, six years after arriving in Wittenberg, he unintentionally initiated the Protestant reformation in Germany, officially known as the Holy Roman Empire of the German Nation. The empire was ruled by a very young but powerful Spanish emperor, Charles V, and its Catholicism was subject to Pope Leo X in Rome.

On October 31, 1517, Luther made public in Latin a set of 95 theses, which invited other scholars to a debate on the value and effectiveness of indulgence letters. These letters promised all believers who purchased them the immediate forgiveness of their past and future sins and guaranteed them a place in heaven. Indulgence letters had been sanctioned by recent popes, but professor Luther argued that this easy path to heaven contradicted the historic teaching of the church. He used the 95 theses to point out that contradiction and to mock the popes for allowing laypeople to be so brazenly deceived.

The debate itself was never held, but the theses were soon printed and circulated to other scholars in Germany who agreed with Luther and translated them into German for a broader public. The consequences were twofold: a popular movement that supported Luther and a confrontation between Luther and the papacy. Four years later, in 1521, Pope Leo declared Luther a heretic and, despite a brave stand before Emperor Charles V, Luther and his followers in Germany were made outlaws subject to capture and punishment. By that time, Luther was a hero to both princes and commoners who resented the exploitation of Germany by the Roman Church, and the Protestant reformation was born. Reformers outside Germany followed Luther’s lead, and the reformation soon spread into Switzerland, southern France, the Netherlands, Scandinavia, and Great Britain.

In response the Roman Church underwent a reformation of its own and maintained its hold on southern and eastern Europe in addition to France and half of Germany. Owing to expansive colonisation by European powers, and later by the United States, the reformation spread into other continents where its impact is still felt. Although the Roman Church lost its dominance over European Christianity, both Catholics and Protestants gained a strong presence in the Americas and in parts of Africa, Asia, and Australia.

The reformation thus led to a worldwide religious and cultural shift that both admirers and detractors attribute mainly to Martin Luther. A prominent cause of that shift was the translation of the Bible into German by Luther and his colleagues and then by other reformers into their vernacular languages. Putting the Bible into the hands of laity and allowing it to penetrate European culture diversified Christianity to an extent not seen in hundreds of years. People who had never held or read the Bible for themselves now used it to form their own ideas of what Christianity was; and some of them started churches and sects that departed broadly from what Luther and other reformers taught. Nevertheless, the mainline Protestant denominations (Lutheran, Anglican, Methodists, and Calvinists like the Reformed and Presbyterian churches) maintained their contact to historic Christianity that had been preserved through their creeds by Roman Catholics in the West and Orthodox churches in the East.

Martin Luther, of course, was not responsible for all that change, but a recent digital mapping project at the Massachusetts Institute of Technology ranked Luther near the top of several thousand significant contributors to the arts and sciences who lived prior to 1950. In the category of religion Martin Luther ranked number five out of 518 candidates and number four out of 746 candidates born in Germany. Among religious figures, only Jesus, Moses, Muhammad and Abraham ranked higher than Luther; in line behind Luther were St. Paul, King Solomon, the Virgin Mary and St. Peter. Among people born in Germany, only Einstein, Bach, and Beethoven ranked higher; Martin Luther bested the father of communism Karl Marx; the literary genius Johann Wolfgang von Goethe; the artist Albrecht Dürer; and the printer of the Gutenberg Bible. According to these results, the reformation ignited in 1517 by Martin Luther resulted in lasting contributions to the field of religion and human culture in general.

Even apart from what he accomplished, however, Martin Luther was an intriguing person. After 1521 Luther lived twenty-five more years during which he pursued the vision of bringing Germany back to ‘true religion’. It was his term for a religion of the heart that replaced a religion of pious works performed in order to merit heaven. Luther’s ‘true religion’ consisted of using God’s free gifts of faith and love to seek justice and peace for others. While pursuing that vision and urging people to adopt it, Luther himself, a former monk, enjoyed a busy and fulfilling life. At age forty he wed a former nun in order to practice what he was preaching: the freedom of priests, monks, and nuns to marry. Together Martin and Katharina set up housekeeping in the Wittenberg cloister where Luther was living and expanded their family by six children, two of which predeceased them.

‘He rejoiced and he mourned, he was healthy and sick, he spoke tenderly and lashed out in anger, he believed and he doubted, he was courageous and afraid, he cursed and he prayed, he was thrilled and disappointed.’

Although hoisted in isolation on a heroic pedestal, Luther was seldom alone. His daily existence was filled with colourful and emotional hours among friends, colleagues, relatives, and critics. He rejoiced and he mourned, he was healthy and sick, he spoke tenderly and lashed out in anger, he believed and he doubted, he was courageous and afraid, he cursed and he prayed, he was thrilled and disappointed. The reformation was started not by a heroic robot but by a dynamic human being leading a vigorous life. The real Luther was neither a hero nor a villain, but a human being with both merits and faults. ‘At the same time saint and sinner’, a key theological principle of his own, fits no one better than Luther himself. This biography shows both sides of the man while allowing for his extraordinary qualities. It also offers sundry glimpses of his daily life and encounters while following Luther’s unconventional public career as a university professor, heretic, renegade monk, political outlaw, provocative thinker, and religious visionary.

Today Martin Luther is best appreciated as a reformer of religion and not merely as a reformer of the church. He strove to replace bad religion with a faith that valued freedom and justice instead of narrow orthodoxy and moralism; religion that opened minds instead of closing them; religion that opened hearts with ‘mutual consolation” (his words) rather than closing them with bitterness and exploitation. Religion was not a crusade and Luther was leery of endorsing campaigns that applauded or practiced violence. Nor was faith something that could be earned by striving to become more pious. Faith was a gift, not a commodity to be grown, and a little of it went a long way. Faith was not merely a private opinion but entailed a public commitment to the welfare of others.

Whether one believes in God or not, religion remains a powerful force for good and evil in human affairs. Luther would not be surprised, nor would he try to explain why God does not jump in and fix the world. The mystery and otherness of God were precious to him, and the faith that captured his heart sustained him when his mind found no easy answer for the suffering and disappointment that touched his own life and the lives of others. Faith was hard, but it was the only sure foundation of a religion that was both humble and hopeful: humble about its own power to remake the world and yet hopeful about a power – greater than that of religion itself – to save us from ourselves. 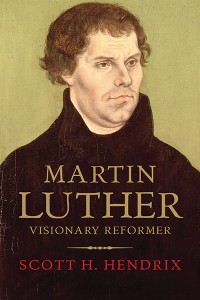 This month, Yale University Press London staff voted for their favourite book on the theme of ‘The Sea‘. Find out…