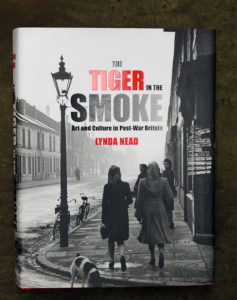 To coincide with the launch of The Tiger in the Smoke by Lynda Nead – her third publication for Yale – we asked her to take us back to 1950s Britain and describe the images of peace and havoc she explores in the book.

Taking an interdisciplinary approach that looks at film, television, and commercial advertisements as well as more traditional media such as painting, The Tiger in the Smoke provides an unprecedented analysis of the art and culture of post-war Britain.

Lynda Nead answered some questions for the YaleBooks blog…

Yale: Can you tell us more about the title The Tiger in the Smoke – which is also the name of a crime novel and film from the 1950s? Is there a connection between them?

Lynda Nead: The title is taken from a crime novel by Margery Allingham which was first published in 1952 and adapted for a film, directed by Roy Ward Baker, in 1956. In Allingham’s novel the ‘tiger’ is Jack Havoc, an ex-army sergeant and a violent convicted murderer who has escaped from prison and is now hiding in and prowling the fog-bound streets of 1950s London. Havoc is searching for a hoard of treasure and with a motley and macabre band of accomplices made up of ex-soldiers and former comrades the novel pursues the gang through the faded alleys, terraced houses and abandoned cellars of the city.

The fog is an essential element of the novel; more than just a background for the action, it is almost a character and creates the feeling of ambiguity and threat that pervades the narrative. Roy Ward Baker’s film, Tiger in the Smoke, makes a number of significant changes to the plot of Allingham’s novel but it retains the menacing visual and psychological atmosphere of the foggy city.

As I worked on the book I felt that the image of the ‘tiger in the smoke’ worked as a theme for the entire project and for my approach to post-war British art and culture, as the country recovered from war and positioned itself as a modern nation. Rather than Jack Havoc lurking in the fog bank that covers the metropolis, waiting to destroy the peace and order of the lives around him, I explored the other, equally threatening, tigers in the smoke of British post-war modernity – colour and migration and the threats from the past – bombsites and Victorianism; broken homes, kitchen sinks and women who resisted the new stylish forms of domestic femininity.

Yale: At the heart of the book is the notion of ‘atmosphere’ in post-war Britain and you also use the term ‘structure of feeling’. How do you define these terms and how might we visualise this?

Lynda Nead: I use the term ‘atmosphere’ to refer both to the air and environment of post-war Britain (the fog and smoke, the stained and broken physical environment, and the attempts to reconstruct and clean) and to evoke the distinctive look and feel of so much post-war British visual culture. ‘Atmosphere’ refers to both the material discussed in the book and to its methodology.

In this book I wanted to do more than write a social history of art in post-war Britain. I wanted to capture and articulate the powerful historical atmosphere embodied in the film, photography and art of this period. Take, for example, the photo-stories by photographers such as Bert Hardy, reproduced in Picture Post in the late 1940s. The atmosphere of post-war Britain is almost tangible on these pages. It is to do with page design and layout, the relationship of text and images, but above all it is in the photographs. It is found in the dress and expressions of people and it is also generated through the material textures of the pages and the subtle range of grey tones that reveal the environments of post-war Britain.

The powerful atmosphere of these images arise from their staging and composition, the light and shadow, the figures and settings, but it is also something more than the form and the content, something in excess of what the images show or what they are about.

Raymond Williams first introduced the concept of ‘structure of feeling’ in the 1950s and continued to develop it in his writing into the late 1970s. Williams used the phrase to describe the defining and distinctive characteristics of a culture, which, he suggests, were both ‘firm and definite’ but also ‘the most delicate and least tangible’ aspects of the culture of a period. I love the ambiguity of this concept, its solidity and its subtle intangibility. This captures the nature of atmosphere. More than the characteristic style of a period, it is its deep expression, something that can be extracted from the cultural forms of a historical period and that conveys its pervasive social conditions and concerns.

I use atmosphere and ‘structure of feeling’ throughout The Tiger in the Smoke to identify the shared qualities and characteristics of the years between 1945 and 1960 as they shifted and reformed in relation to changing economic, social and political priorities. I trace them through representations of the spiv, concerns about the rebuilding of the family home, the cleanliness of the air, and fears of miscegenation; in images of bombsites, the figure of the housewife and the experience of a Sunday afternoon.

Yale: Your book explores the importance of colour in post-war Britain, in relation both to art and culture and in terms of race and immigration; how are these different aspects related?

Lynda Nead: The dialogue between black and white media and colour is a central theme of The Tiger in the Smoke and Part Two, ‘The Question of Colour’, moves on to the fraught and over-determined debates concerning post-war colour. If austerity Britain was defined, in part, through a deep and expressive imagery of greyness, then modernity was understood in terms of a different register of vision and a return to colour. Colour, however, was not only modern and innovative, it was also wayward and troubling; Britain needed to be taught how to use colour, how to control its expressive and expansive possibilities. For many critics, filmmakers, photographers and artists, there was a distinctive quality to British colour that differentiated it from American colour, for example. It was subtle and evocative, as though it had absorbed the weather and atmosphere of the country!

The historical significance of colour in this period is very considerable. Colour was national and its imperial function was embedded in the naming and narration of colours by the British Colour Council. Above all, the language of colour in this period is the language of racial difference, of the colour bar and fears of a new generation of migrants from the colonies bringing a new and strange colour to the landscape of post-war Britain.

Yale: The final part of your book deals with the woman at home and her role as a homemaker. Why was this so important to post-war Britain?

Lynda Nead: The fantasy of an ideal home pervaded plans for post-war reconstruction but this meant that the image of the housewife had also to be reconfigured. Women, like their kitchens, had to become both stylish and practical. In the 1950s the domestic became the focus of a cluster of debates about women, consumption and modernity and key to these ideas was the look of women within the home. If, as it was claimed, domestic labour was no longer physically demanding and dirty, then there was no reason for women in the home to look dowdy or unfashionable. A new kind of housewife appeared in the press and media – elegant, relaxed and dressed specifically in a new type of costume designed for life in the post-war home.

The cosy or worn dressing gown, perhaps food- or tea-stained, a little faded and fraying at the edges, yielded to the post-war housecoat which became a leitmotif of modern domestic femininity: glamorous, convivial and surrounded by new technology and commodities. In Part Three of my book, called ‘Kitchen Sinks and Other Domestic Dramas’, I use the figure of the woman in a dressing gown to explore the tensions between ideals of modern domesticity and the experiences of domestic life and marriage for many in the period. In 1956 the Independent Television network broadcast a play called ‘Woman in a Dressing Gown’ by Ted Willis, who also wrote the hugely successful BBC series Dixon of Dock Green. The play told the story of a middle-aged couple and their son whose lives are torn apart by the husband’s infidelity. Turned into a film the following year, the narrative explores the gap between dreams of domesticity and the compromises and pain of modern post-war marriage. The Tiger in the Smoke draws on film, television, advertising, journalism and broadcasting to examine the everyday and the ordinary, the women in dressing gowns who are part of the ‘structure of feeling’ of post-war Britain.

Yale: Which books or films would you recommend to those interested in immersing themselves in the visual culture of post-war Britain and discovering more about this period?

Lynda Nead: I have one absolute favourite film from this period, which I recommend everyone should see! It Always Rains on Sunday is an Ealing studios film, made in 1947 and directed by Robert Hamer. The family at the centre of the plot are the Sandigates. Rose Sandigate, played by the outstanding Googie Withers, is a former barmaid and is married to George, a dull but decent middle-aged man. The drama of one rainy Sunday is brought about by the escape from prison of Rose’s former lover and his intrusion into the domestic world of the Sandigates.

It is a fantastic portrait of East End life and the tensions between duty and desire. The rain and the grey, wet streets of the city create a vivid urban environment for the domestic crisis that follows. The black and white photography is incredibly rich and evocative and there is, in addition, brilliant artwork for the film poster and publicity by the artist James Boswell.

The real pleasure of working on the book was immersing myself in the literature and films of the period; so many of these authors, directors and actors are now forgotten and really deserve to be remembered for the work they produced.

Lynda Nead is Pevsner Chair of History of Art at Birkbeck, University of London.

The Tiger and the Smoke: Art and Culture in Post-War Britain is available in all good bookshops, or from the Yale UK website here. 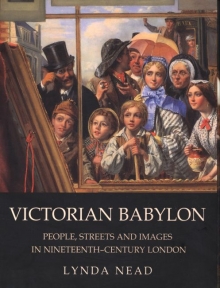 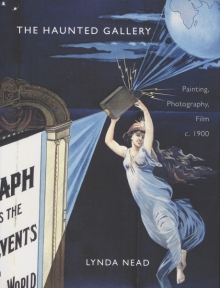 The Life of a Failed Prophet: Extract from ‘Savonarola’ by Donald Weinstein