Brutus’s leading role in the assassination of Caesar immortalised his name, but the verdict on his act remains out to this day. Was he an unscrupulous killer, or a constant and noble patriot? Below, Kathryn Tempest delves behind the ancient evidence to set aside the myths and address whether Marcus Brutus was ‘The Noblest Roman of them All’?

“In the centre of Mediolanum in Cisalpine Gaul (ancient Milan) there once stood a bronze statue of Brutus, probably erected in Brutus’ own lifetime. The Emperor Augustus had seen it and he allegedly winced at the sight of his former enemy; after all, Augustus was Caesar’s great-nephew and adopted son, and Brutus had killed Caesar. Yet for others, the statue was a symbol of liberty. Brutus was ‘the founder and defender of our laws and liberties,’ cried one impassioned advocate towards the end of the first century BC, as he pointed to the statue and lamented the state of Italy, where he thought freedom of expression was being curtailed. From this point of view, the assassination had been a glorious deed: philosophy and principles had joined forces with military strength to remove a dictator. This had been Brutus’ particular achievement: to be remembered not just as a man of action, but as a man of virtue. Of all the men who colluded to kill Caesar, it was said that Brutus was the only noble conspirator.” (Extract from Kathryn Tempest, Brutus: The Noble Conspirator)

When Shakespeare has Mark Antony pronounce Brutus ‘the noblest Roman of them all’ he taps into a sentiment that was as old as his subject matter: even his enemies admired Brutus – or so we are told by the Greek biographer Plutarch (AD 46- c. 120), whose account of Brutus’ life is the only one to survive from antiquity. But why was he singled out as the only noble conspirator? After all, assassination in the ancient world was a disreputable and murky business; there was nothing ‘noble’ about it.

One reason for Brutus’ posthumous reputation can be traced back to how he was perceived by his contemporaries, and in particular to the use of the Latin word nobilis, (meaning ‘well-known’ or ‘famous’) to describe members of Rome’s political elite. The nobiles in Brutus’ day were men who could point to at least one member in their family who had already held the consulship (the highest elected office in the Senate) – a lucky few who were then expected to follow in their family’s footsteps. Admittedly, no one was ever automatically guaranteed a place at the dizzy heights of power in the Roman Republic. Yet noble status carried great prestige, influence and political cachet. And in the case of Brutus, the nobility of his name was further enhanced by the glory of the man from whom he claimed descent: Lucius Junius Brutus, the legendary hero who liberated Rome from kings in 510 BC.

Before then, Rome had been ruled by a monarchy: a period of kings which, tradition had it, started with Romulus in 753 BC and ended with Tarquinius Superbus – ‘Tarquin the Proud’. Our ancient sources tell us that his tyrannical rule was characterised by violence and murder. He was hated at Rome. But the final straw came when his son, too, raped a lady of noble birth and marriage. The result was that Lucius Junius Brutus forced the Tarquin family out of Rome, and he declared there and then to rid the city of kings – or so the story goes. Thereafter, power over Rome’s affairs was concentrated in the hands of the Senate, an elite body of executive officials, while the kings were replaced by two annually-elected consuls. The Roman historian Livy tells us Lucius Junius Brutus was the first man to hold the consulship in 509 BC, and that as soon as he entered office he took a crucial step: he made the people swear they would never allow any man to be king at Rome. And for the rest of Roman history, the word ‘king’ or rex was a term that invoked fear and loathing. Instead, the Romans championed ‘liberty’ and the ‘free Republic of Rome’ – and they remembered Lucius Junius Brutus as the founder and guarantor of that freedom.

If this story sounds too neat to be true, one family producing two renowned champions of liberty, that is probably because the tales of Lucius Junius Brutus were used to great propagandistic effect after the assassination of Caesar. Yet even as a young man Brutus had exploited his name, its legendary associations and the reputation it conferred upon him as a defender of the Roman Republic. He had minted coins advertising his ancestry and name to the electorate at Rome; the hall of his house was decorated with the images of his illustrious ancestors; he even commissioned a family tree – ‘a great work of art’ according to his older contemporary Cicero.[1] But, in all this Brutus was aiming at something more than simply advertising his inherited nobility: he was proudly displaying his familial piety and his commitment to emulating the achievements of its best men. In so doing, he added a nobility of character to the reputation he was so carefully crafting. And character, to the Romans, counted for a lot.

Yet readers of Plutarch will know that the biographer has something else in mind when he praises Brutus: namely, the nobility of purpose from which he acted. ‘Brutus,’ he records, in words Plutarch attributes directly to Mark Antony, ‘was the only man to have slain Caesar because he was driven by the splendour and nobility of the deed.’[2]  What Plutarch means by this, and what he particularly admired about Brutus, was that he was a philosophical man who had put his ideas into action. Brutus, he believed, had killed Caesar because he feared the latter was establishing a tyranny over Rome. Time and again Caesar had held the offices of consul and dictator; just two months before he was killed he had been made dictator perpetuo – dictator for a potentially unlimited term – all of which left him in a position of unrivalled power. The rest of the conspirators, Plutarch tells us, acted because they hated and envied him. After all, Caesar’s domination was blunting their own political ambitions. But to return to our question: why was Brutus singled out as the only noble conspirator?

To begin with, Brutus owed his life to Caesar, to whom he had defected after the Battle of Pharsalus in 48 BC. From then on, Brutus supported the dictator’s rise to power and had himself benefitted from Caesar’s regime. Caesar had loved and supported Brutus; hostile rumours (and an unlikely story) even had it that Brutus was Caesar’s son – the love-child he shared with his mistress Servilia, Brutus’ mother. Yet, on the Ides of March 44 BC, Brutus put his country ahead of friendship when he led the plot to kill Caesar. No simple assassin, in Plutarch’s version, then; Brutus had been caught on the horns of a dilemma when he had to weigh his public duty against his own private interests. Or, as Shakespeare would have it – in the funeral speech he puts into Brutus’ mouth: ‘As Caesar loved me, I weep for him; as he was fortunate, I rejoice at it; as he was valiant, I honour him: but as he was ambitious, I slew him.’[3]

Some men, like the Roman politician Cicero, immediately celebrated the death of Caesar as a victory and congratulated Brutus on the recovery of freedom. Others disagreed. Even if they disapproved of Caesar’s dictatorship, still they saw that he had achieved some remarkable things: he had targeted issues such as crime, gangs and poverty. In addition, he had worked tirelessly to reform Rome and improve its living conditions. Far from restoring liberty and the Republic, the death of Caesar only resulted in a far more catastrophic sequence of events: another civil war, thousands of Romans slain, and the death of Brutus himself – as Shakespeare’s audience well knew by the time Mark Antony’s eulogy was delivered over Brutus’ dead body. ‘To some it seemed the worst of crimes, to others the most splendid,’ remarked the Roman historian Tacitus, writing over a hundred years after the death of Brutus; opinions over the assassination were divided from the start, as they remained in the centuries that followed.[4]

As for Brutus himself, few historical figures have inspired such a conflicting legacy. In Dante’s Inferno, he is placed in the very pit of hell: an arch-villain eternally chewed by Satan himself for his betrayal. But in Gulliver’s Travels, the narrator describes him as one of the most virtuous and benevolent people he has ever encountered. The interpretation of Brutus as either a selfless fighter against dictatorship or an opportunistic traitor has varied along with historical and political circumstances. Even today, more than two thousand years later, dilemmas such as the price of liberty, the conflict between personal loyalties and universal ideals, and whether it works when a tyrant is removed remain as relevant as ever. Yet in all this Brutus himself has continued to fascinate: an unresolved conundrum which has in turn transformed him into an almost mythological, legendary character.

When we encounter Brutus today in modern representations on TV, stage and film, the Brutus we see is predominantly the product of Shakespeare. Thus, when he appears, he is more of a troubled soul than a public symbol, and the result is often sympathetic: a tragic hero akin to Hamlet. Yet even in this brief survey we have seen how the portrait of a noble conspirator torn between his public and private obligations has its roots in a much longer tradition; Shakespeare was drawing on the biography of Plutarch, who in turn had access to the image of Brutus as he was presented in a whole range of media: the coins Brutus himself circulated; the philosophical treatises and speeches he published; letters he personally composed or received; as well as the memoirs and biographies penned by his friends in the aftermath of Brutus’ death at Philippi. And when we look closely enough, the cracks too appear to emerge: Brutus’ flaws, hostile verdicts – a less than ‘noble’ conspirator. When a historical figure has been so variously interpreted, it is unlikely that any study can claim finality on the verdict. But what we can do – as I attempt to do in this book – is to reshape the question from ‘What should we think of Brutus?’ to ‘What did his contemporaries think of Brutus?’ And from there, we can start to see the man emerge from behind his legend: a man who possessed some of the most admirable virtues, as well as the most despicable vices, of his day. 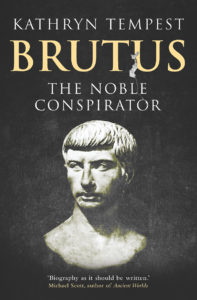 Kathryn Tempest is senior lecturer in Latin literature and Roman history, University of Roehampton, and author of Cicero: Politics and Persuasion in Ancient Rome. She lives in Surrey, UK.

Eureka! ​The Gift of Imagination