Despite his untimely death from tuberculosis, Danish writer Jens Peter Jacobsen became a cult figure to a generation of writers and artists and continues to occupy an important place in Scandinavian cultural history. Below, Morten Høi Jensen explores the influence Jens Peter Jacobsen had in James Joyce’s early work.

One day in mid-August 1936, the Danish modernist writer Tom Kristensen, author of the great novel Havoc (1928), stood in line in Politiken’s bookshop in central Copenhagen next to a tall, gaunt man with thick, black eyeglasses inquiring about a book in fluent, if accented, Danish. The book in question was not in stock but the sales clerk assured the foreigner that it could be delivered in the next few days. He asked for a name and an address, to which the foreigner responded: “James Joyce, the Tourist Hotel.”

Astonished, the clerk soon introduced the two modernist authors to one another. Joyce, for his part, quickly recognised Kristensen as the author of several articles about his work, while Kristensen had been inspired in his own novels by Joyce’s innovative style. Before long the two writers were seated at a café on Gammel Torv, where Joyce ordered a bottle of white wine — once again in fluent Danish that had, Kristensen later wrote, an Italian lilt. Joyce explained that he spoke the language out of love for the Norwegian playwright Henrik Ibsen and the Danish novelist Jens Peter Jacobsen.

Joyce had read Jacobsen at least as early as 1901; in his essay “The Day of the Rabblement,” he refers to the “tide which has advanced from Flaubert through Jakobsen to D’Aunnzio [sic]”—suggesting, perhaps, that Jacobsen is the writer who connects the lyrical realism of the mid-nineteenth century to the modernism of the early twentieth. In a 1905 letter to his brother, Stanislaus, he says that he is awaiting delivery of Jacobsen’s stories in a German translation, and implores Stanislaus to “read Siren Voices and report”—Siren Voices being the English title of Henry Handel Richardson’s 1896 translation of Jacobsen’s novel Niels Lyhne (1880).

Joyce’s interest in Jacobsen was part of a larger intellectual affinity he shared with Scandinavian literature and culture, especially the time of the so-called Modern Breakthrough at the end of the nineteenth century, when literary naturalism and French positivism was imported to rouse Denmark from its pastoral conservatism. The man who presided over this tumultuous era was the Danish-Jewish literary critic Georg Brandes, whom Joyce revered and sent copies of his novels to. (In the “Scylla and Charybdis” chapter in Ulysses, Stephen Dedalus discusses and quotes from Brandes’s celebrated 1898 biography of Shakespeare). Brandes also played an instrumental role in the career of the Norwegian playwright Henrik Ibsen, whom Joyce greatly admired and wrote about at length.

The debt to Jens Peter Jacobsen is most obvious in Joyce’s early work. Though he never mentioned Marie Grubbe, Joyce’s famous last lines in “The Dead” (“…the snow falling faintly through the universe, and faintly falling, like the descent of their last end, upon all the living and the dead”) call to mind a similar passage from Jacobsen’s novel: “it just kept coming – the darkness, the emptiness, the longing and the sorrow, day upon day – like the slow continual fall of snow, one flake after another…” More obvious still are the similarities between The Portrait of the Artist as a Young Man and Jacobsen’s Niels Lyhne, these influential künstlerromaner, both of them portraits of the intellectual and emotional formation of young artists protesting the narrow confines of their origins. Stephen Dedalus’s revolt against religion, his refusal to “serve,” as he famously puts it, is reminiscent of Niels Lyhne’s lifelong rejection of God. Even Stephen’s conversations with Cranly are like those Niels has with Dr. Hjerrild.

But above all Joyce, like Jacobsen, recognised the paradoxical position the atheist so often occupies. God can never be properly banished from the province of the unbelieving. Niels Lyhne’s atheism routinely overflows its principled boundaries and becomes a kind of God-hatred, what the literary scholar Bernard Schweizer calls “misotheism.” Niels, indeed, sometimes sounds like Maurice Bendrix, the narrator of Graham Greene’s novel The End of the Affair, who at one point bitterly writes, “I hate you, God. I hate you as though you existed.”

Like Niels, Stephen Dedalus rejects God and the comfort of religion. He “will not serve,” as he proudly says. But as Cranly provocatively points out, “It is a curious thing, do you know, […] how your mind is supersaturated with the religion in which you say you disbelieve.” 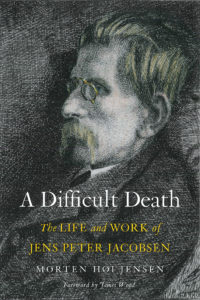 Born in Copenhagen and educated in England and America, Morten Høi Jensen has contributed to numerous publications, including the Los Angeles Review of Books, Salon, and the New Republic.

The Gothic Revival movement in architecture was intimately entwined with eighteenth and nineteenth century British cultural politics. By…