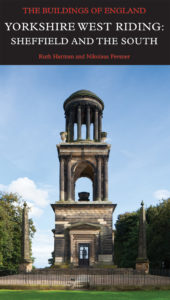 This authoritative guide, the companion to Yorkshire West Riding: Leeds, Bradford and the North, covers a vast area marked by tremendous diversity of both landscape and buildings. To celebrate publication, Ruth Harman reflects on the area and some of its architectural treasures, focusing on the intriguing question ‘West Riding South – Where Are The Women?’.

West Riding South – Where Are The Women? by Ruth Harman

Most of the owners, architects, sculptors and other craftspeople named in Yorkshire West Riding: Sheffield and the South are inevitably men, but if one looks a little harder one can also find instances where women were the commissioners of work, or were its designers or makers. 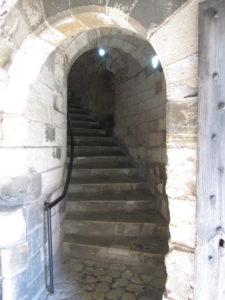 Perhaps surprisingly, the first example dates from as early as the C9. At Thornhill church there are several pieces of cross shafts decorated with interlace one of which has a runic inscription recording that it was set up by Gilswith in memory of Berhtswith. Not only does it commemorate a woman but it is thought to be a unique example of an Anglo-Saxon cross commissioned by a woman. In the late C12 Conisbrough castle was built by the wealthy heiress Isobel de Warenne and her husband Earl Hamelin, Henry II’s illegitimate half-brother, who through her acquired the title, high status, and extensive estates of her powerful family. Although the splendid circular limestone keep appears forbiddingly defensive its two principal floors form what was, by Norman standards, luxurious living accommodation, comprising a Great Chamber with a Bedchamber above. They are reached by an unusually spacious staircase, set within the thickness of the wall, that one might sweep up and down quite comfortably in a long skirt.

One of the prettiest examples of the private spaces enjoyed by the wealthiest women in the C18 is Lady Strafford’s Reading Closet in the south range of Wentworth Castle (now Northern College), built in the 1760s. Its coved ceiling has painted decoration of honeysuckle entwined among gold trelliswork on a deep blue ground and the frieze is unusual, being made of mirrors painted with festoons and ribbons. Further north, near Halifax, Anne Lister (1791-1840) inherited the Shibden Hall estate in 1826. Spirited, independent and adventurous she is now best known for her diaries, which not only describe her daily life and estate improvements but also, in passages written in cipher, her lesbian relationships. Living at Shibden Hall with Ann Walker, whom she ‘married’ in 1834, she restored and extended this fine late C15 timber-framed house, adding the tower to the west cross-wing for her library and a new east service range fronted by a loggia overlooking a terraced garden. Anne died in the Caucasus while travelling in Europe and Asia and Shibden Hall later passed to her cousin John Lister. He first deciphered her diaries and hid them in the house, which became a museum after his death in 1933.

Among the area’s earliest works by women named as designers or makers are the stone font and the oak pulpit and poppyheads at Letwell, carved in 1869 by Fanny and Mary, daughters of Sir Thomas Woollaston White, who paid for the church’s restoration after a fire. One wonders how they learnt their crafts. Clara Keeling of Sheffield was trained as a woodcarver by her father, Arthur Hayball and carried on the business after his death in 1887, completing fittings at Bradfield church. The stained glass window by Mary Lowndes at Skelbrooke church, 1894, is a fine example of the work by this Arts and Crafts artist and suffragist, while windows by modern artists include those by Ann Sotheran at Hooton Pagnell, 2000, and Helen Whittaker at St Mary, Bramall Lane, Sheffield, 2008. Painted panels by Evelyn de Morgan can be seen at Cawthorne church and two figures painted by Emily Ford in 1921 form part of the WWI memorial at Greasbrough. More prosaically, women were employed as bricklayers’ assistants in 1916 when the model village of New Rossington was built. Despite the shortage of male labour building miners’ houses was a priority as coal from the new mine was desperately needed for the war effort. The Doncaster Chronicle reported that the women ‘proved quite satisfactory’ and even acknowledged that ‘some of them were perched on the rafters of the buildings and showed no sign of fear’! Near Whitley, north of Doncaster, the huge Eggborough power station, built 1962-7, dominates the flat landscape. Brenda Colvin (1897-1981), who was a pioneer of industrial landscaping, was engaged by the Central Electricity Generating Board to reduce its impact. Her careful screening of the low-level clutter of ancillary buildings and equipment with a wooded embankment around the site allows the turbine hall, chimney and vast cooling towers to be seen in majestic simplicity.

There are of course many more instances where women, either real or imaginary, are represented in all their variety in stone, marble, wood, glass or paint, but that is another story… One favourite example is this image of St Margaret of Antioch, standing triumphant over the dragon, in Harry Harvey’s window at Swinefleet church, 1959.

Yorkshire West Riding: Sheffield and the South is available from Yale University Press, or visit your local bookshop!

Read more from the Pevsner team and our authors, here.

News from the London Book Fair 2011

The London Book Fair, one of the biggest events in the book publishing calendar, kicked off yesterday, with an…