It is nine years since Lehman Brothers went bankrupt and the world changed. Gone were blithe assumptions of increasing prosperity, rosy futures, and safe nest eggs backed by savvy policies, replaced by a new mediocre of low growth, lacklustre investment, and diminished respect for expertise.

Appropriately for such a pivotal moment, there have been many books on the crisis. But they have focused mainly on immediate causes.  Below Tamim Bayoumi asks how the North Atlantic economy became so parasitically intertwined  that the failure of a medium-sized US investment bank could topple the entire North Atlantic region into deep recession and the euro area into a depression. The answer lies in serial but different regulatory mistakes on either side of the North Atlantic that started in the 1980s and essentially finished by 2003—well before the final, unsustainable boom got going.

The less well-known European story comprises several elements. Regulatory changes in the mid-1980s encouraged the creation of large universal banks in northern Europe that merged commercial banking (loans to clients) with investment banking (buying and selling assets). These banks thrived following an ill-conceived amendment to international rules that let them manipulate their internal risk models to reduce capital buffers and expand lending, including to the US and Euro area periphery. The growing fragility of the universal banks was missed by national regulators because competition led them to focus on protecting their own “national champions”.

US banking went through a seemingly better-known, but equally misunderstood, transformation. Starting in the 1980s, deposits were increasingly diverted from relatively well-regulated commercial banks to more fragile investment banks that offered better rates and formed the core of the shadow banking system (confusingly, despite being called banks, the investment banks were outside of banking regulations). As deposits shrank, commercial banks increasingly dumped mortgages on shadow banks via securitized assets, a trade that worked because the shadow banks could skimp on (expensive) capital buffers required for commercial banks. The resulting North Atlantic financial boom is illustrated below. 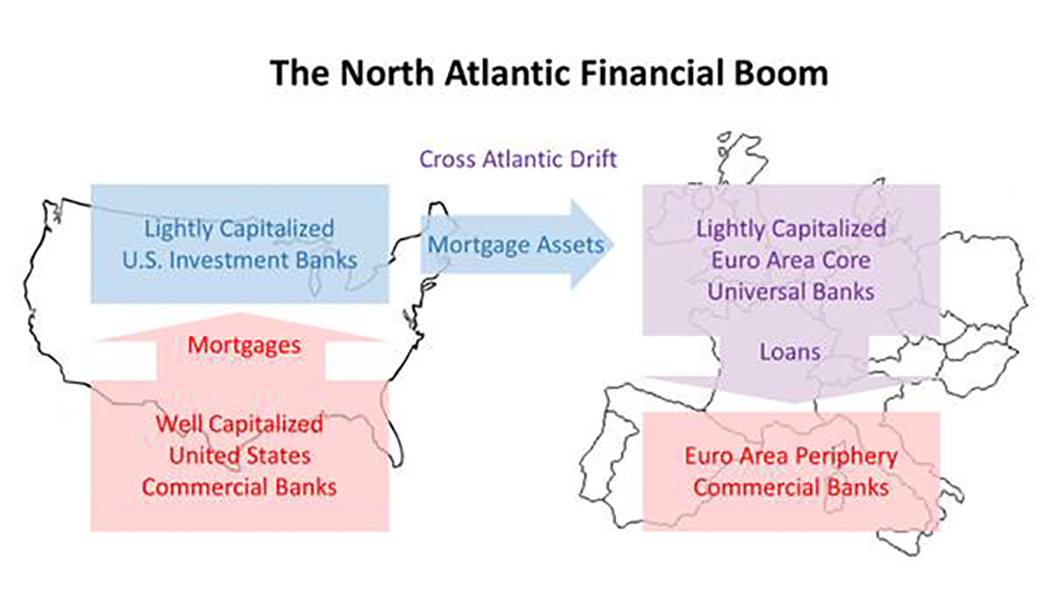 Intellectual blinkers also explain why the growing pre-crisis financial imbalances were missed by policy makers. An overinflated belief in the ability of markets to discipline banks led to the Basel Committee’s unfortunate switch that allowed European banks to exploit their risk models to reduce capital buffers. Similarly, an excessive confidence in the effectiveness of monetary policy led central banks to underestimate financial stability risks and the importance of policy cooperation.

How effective has the response been to these deep weaknesses? On the policy front, the picture is mixed. US shadow banking has been tamed as major investment banks are now under the same—strengthened—regulation applied to commercial banks but there is now a backlash against tighter regulation. In the Euro area, banks’ capital buffers have also been strengthened, but the major banks are currently still only using internal models to calculate the riskiness of their loans. And while the architecture of the Euro area has been improved by allowing better support for members, this is limited to countries prepared to admit that they are in crisis. Encouragingly, bank supervision for the largest banks has been centralised at the ECB, but responsibility for the costs of bank rescues remain national. A more complete banking union and stronger national policies are needed to allow the single currency to move toward the smoothly functioning currency union the “French” view envisaged.

Intellectually, the macroeconomics profession is only slowly adapting to the lessons from the crisis. Despite a lot of work on macro-financial linkages and an acknowledgement of financial risks and the role of macro-prudential policies in maintaining financial stability, standard macroeconomic models generally retain assumptions found wanting over the crisis—that financial markets are omnipotent, monetary policy is powerful, and international spillovers are limited.

Those who do not learn history are doomed to repeat it. The North Atlantic crisis came from bad decisions made for understandable reasons. Without a better response to the deep policy and intellectual errors that drove the crisis, the region risks continuing the new mediocre. A true recovery will require accepting that there remains a lot of unfinished business. 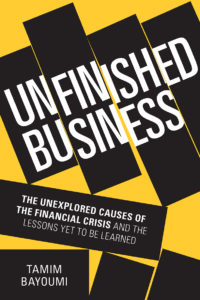 Tamim Bayoumi¹ is deputy director in the strategy, policy, and review department at the IMF. He wrote this book while he was a senior fellow at the Peterson Institute for International Economics. He lives in Washington, DC.

[1] This column reflects my own views, and does not necessarily reflect those of the International Monetary Fund or the Peterson Institute for International Economics, where I wrote the book on sabbatical.

Bookshop of the Month – A Review of 2021 in Bookshops

From Glasgow to Brighton and Fowey to Stockton-on-Tees, join us on a tour of the brilliant bookshops we…