In his latest work, Against the Grain, James C. Scott explores why humans abandoned hunting and gathering for sedentary communities dependent on livestock and cereal grains. Below he discusses the Paleo diet, and its link to ancient civilisation.

I am neither an advocate nor a practitioner of the Paleo diet. I love bread, pasta, butter, and yogurt far too much to forsake them altogether.

On the other hand, I have made an effort to understand the dietary consequences of ‘civilisation,’ of the food ways typical of life in what I have come to call ‘the late-Neolithic, multi-species, resettlement camp.’ Compared to our hunting and foraging ancestors, whose mobile ways for roughly 95% of our species history on planet earth made for a very broad spectrum diet, the variety of food in the first cities and states was sharply reduced. It consisted, to an unprecedented degree, of cereal grains: millet, rice, wheat, barley, and maize. Today, we, the descendants of these civilised food ways, consume a diet that is still dominated by one or more of these major starch staples.

‘Civilisation’ was not good for our health. Archaeologists have proved this. If we examine two female skeletal remains from, say, 8,000 years ago, one from within a ‘grain’ civilisation and the other from mobile foraging and hunting peoples outside that civilisation, the difference is clear. The bones and teeth of ‘civilised woman are far more likely to have left a signature of malnutrition and iron-deficiency anemia while the bones of those outside these centres (the ‘barbarians!’) rarely bear such signs. What’s more, the barbarians are taller, less likely to be stunted. The difference is most striking among women due to the loss of blood during menses combined with a diet often lacking in the protein that would replace the red blood cells quickly.

The relatively bad health (hunters and gatherers, of course, had their own ailments) of the ‘civilised’ population was, in social-science terms, overdetermined. First, the small states in which they lived encouraged cultivation of one or two major starch staples that could be used for taxation, storage, transport, rations, and social control. Virtually all the early civilisations were located on riverine flood-plains which, alone, allowed for the concentration of population and food supply that made taxation and social control (the essence of state-formation) possible. It’s worth pausing to wonder why the cereal grains are indelibly associated with state-formation. There are, after all, other starches: breadfruit, bananas, potatoes, cassava, sweet potato, taro, and sago that are nutritious. Here the main problem is that they either are roots and tubers which can be left in the ground and harvested at will, or above ground crops that store poorly and have low value per unit weight and volume in transport. States more or less insisted on a major cereal grain and discouraged or prohibited forms of cultivation that avoided the tax-man,

The second problem of the early states was crowding and the resulting epidemics. The early civilisations were a unique assemblage of humans, domestic animals, closely-planted crops, and all of the uninvited guests (commensals) that found an agricultural settlement a fine place to chow down as well.  The commensals included among others, mice, rats, sparrows, crows, and the cavalcade of insect pests that infested them and domestic animals: ticks, lice, bed bugs, etc. In this new ecological unit (I call it the ‘domus’) of people, cops, animals, and hangers – on the crowding if critters set off a new process of evolution. For our purposes, what was most important was the rise, for the first time in history, of zoonotic diseases as a result of crowding. Virtually all of our infectious diseases (mumps, measles, chicken-pox, plague, smallpox, etc.) were a product of the unprecedented crowding of domestic animals and people. That’s why they are often called ‘density-dependent diseases’.

Domesticated crops, too, were subject to the epidemics that arise from crowding – in this case, crop diseases which multiplied rapidly with so much to eat nearby. The result of all these processes of crowding in a novel ecology meant that the populations of early civilisation and, for that matter, their society as a whole was fragile. High rates of mortality due to diet, epidemics, crop-failures, not to mention the tax exactions and conscription of the early states, plagued the first subjects of civilisation. For that reason they were liable to collapse suddenly. Such collapses were typically read as lamentable destructions of monumental centres of civilisation that we associate with the magnificent displays in museum exhibitions. Quite often, they were the abandonment of an early city by a population fleeing a plague, a crop failure, or the taxes and conscription of an over-reaching monarch. The world outside the walls – the realm of the barbarians – was healthier and freer in so many ways. And the food was almost certainly more diverse and tastier.

Author’s Note: There’s another line of thought, much in dispute, about diet, crowding, and evolution. It is asserted that prior to roughly 10,000 years ago ALL homo-sapiens were of blood type O.  Further it is asserted that blood type A came into being around 10,000 BCE and is associated with a slightly higher resistance to density dependent diseases. It’s further asserted that blood type B only arose around 5,000BCE and is associated with pastoralism and dairy-diets. (Blood type AB, it is claimed only arose in the last 500 years.) [See D’Adamo and Whitney, Eat Right 4 Your Type] I and others are skeptical of this argument but, in general terms, it does make sense that we should have adapted physiologically to radically new living conditions made possible by the Neolithic ‘revolution’. We are today increasingly aware that such evolutionary adaptation can occur more rapidly than we had previously assumed. 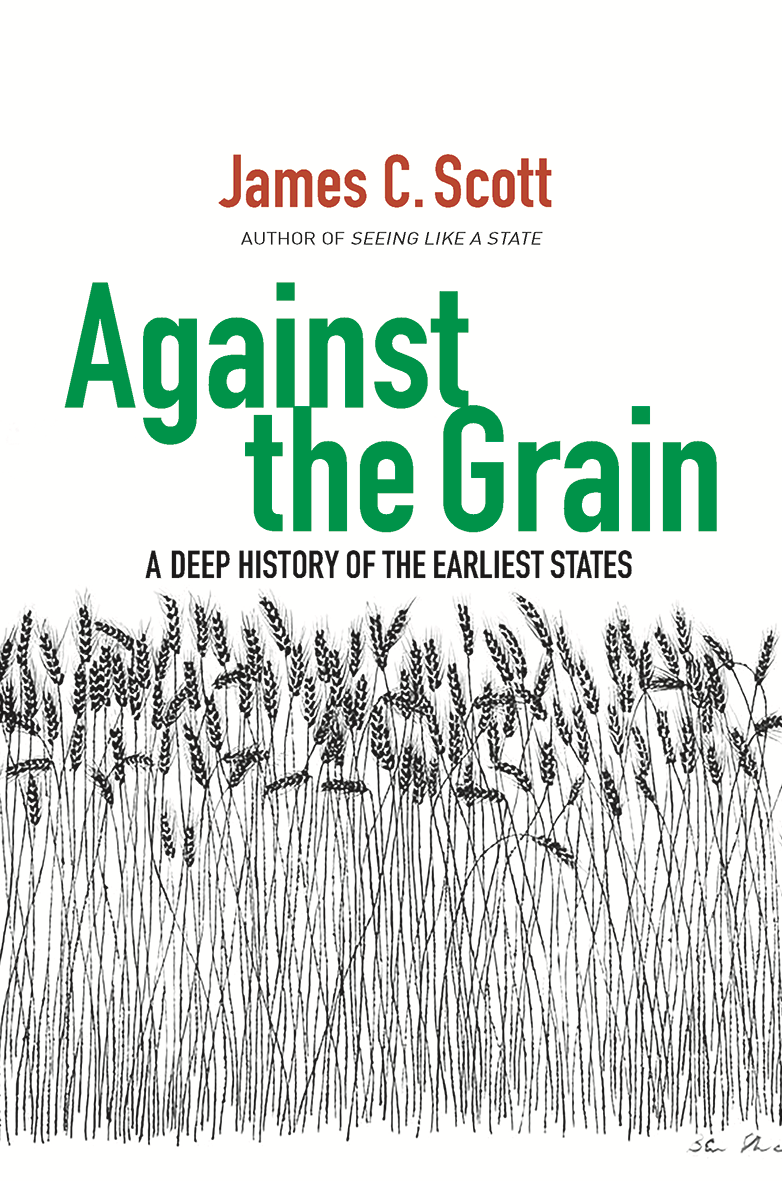 James C. Scott is Sterling Professor of Political Science and co-director of the Agrarian Studies Program at Yale University. His previous books include Domination and the Arts of Resistance, Seeing Like a State, and The Art of Not Being Governed.

Against the Grain is available to purchase here.

What will you be reading over the Easter weekend?

Yale University Press presents some ideas to kick-start your bank-holiday reading. Easter is fast approaching, and the more…