In her new book, The London Cage, historian Helen Fry reveals what life was like in one of Britain’s most notorious World War II interrogation centres. Established in 1940 by the British intelligence services, the London Cage held prisoners of war behind the locked doors of three mansions in London’s exclusive Kensington Palace Gardens. Fry discusses below the unexpected barriers that have arisen when researching the history of secret intelligence…

Writing the history of spies, espionage and the intelligence services, especially MI5 or MI6, poses its own particular challenges. Secret intelligence organisations are shrouded in myth and mystery, often self-created, and that attracts a certain public curiosity. How far historians can reconstruct the full truth is an open question, since many files still remain classified. This in itself can fuel speculation, rumour and conspiracy theories that something is being deliberately covered up. When I embarked on research for The London Cage, I was already aware of the controversies surrounding its reputation. My aim was to tell its full history for the first time and create ‘life inside the cage’ – a vivid picture as if the reader was standing there as an observer. Was that realistic or achievable?

In the end, it has been possible to reconstruct a pretty comprehensive account of daily life in the cage – the fears of the prisoners, the challenges facing the interrogators and the brilliance of its controversial commanding officer, Colonel Scotland. Some are even warming to Colonel Scotland – the maverick, controversial commander of the cage who sanctioned unorthodox methods of interrogation, and possibly torture. Even this did not obscure his brilliance which seems to shine through even the darkest parts of the book.

But, I did not expect to come up against my own barriers during the research. Sensitivities began to emerge that did not immediately make sense to me. For example, there had been four suicides in the cage, but their names had never been made public. One was the subject of a short piece in the Evening News in March 1946, which stated ‘because of his complicity in war crimes, the name and nationality of this man will be kept secret.’ In this modern day, especially with computer technology to carry out international searches, it must be possible to find his name in official records? But, as I soon discovered, the national indexes have thousands of entries for deaths in the first quarter of 1946 – even when limiting it to a German surname. Where next?

I have always believed that ‘the devil is in the detail’, and this proved a helpful dictum in the case of these suicides. The breakthrough came when I was working through those files that had been declassified. I stumbled across a somewhat sarcastic, dismissive comment by Colonel Scotland in his summary report of an SS prisoner. He wrote, ‘after the demise of SS Helmut Tanzmann…’ Demise? Was this one of the suicides? Tanzmann was certainly held in the cage in March 1946. When I looked for the registration of death for Tanzmann, I came across a complete blank. No reference to him in the Kensington district, nor widening the search to any area in the United Kingdom for 1946, or years either side, nor on any genealogical research site. Further research revealed that he had been buried in the German military cemetery at Cannock Chase, north of England. I knew that a death certificate had to be presented to bury a body. How was Tanzmann buried without it?

Another look at the files of the cage gave a second clue. Tanzmann’s alias was S. Koch – revealed on his false identity papers at the time of capture. But, I could not find a death certificate in the name of S. Koch. However, the national index did have an entry for Hans Koch in the first quarter of 1946. I ordered up the certificate, paid for it, only to discover subsequently that it had been ‘lost in the post’. After much persuasion, a duplicate was issued. So, Tanzmann’s death was registered under the name of Hans Koch, and he was buried as Helmut Tanzmann. That established, it was time to check out Coroner’s records to find out if there were any mysterious circumstances about his death. When I began making enquires, I had clearly stepped on a sensitive nerve. The Coroner confirmed within fifteen minutes of my enquiry that reports for that period have been destroyed and only the most important are kept. So, the Coroner’s original reports for four suicides in the cage had been destroyed because they are not important. I wondered if they had been misfiled so made a Freedom of Information (FOI) request. I soon discovered that Coroners are exempt from FOI. That was as far as I could go with the suicides. In the end, I managed to reveal from my extensive research the names of two of the four suicides.

Piecing together gaps in secret history is one difficulty, but another is inadvertently stumbling across unexpected sensitivities. I encountered that when making enquiries about the London Cage at a local archive. The very mention of it elicited a reply: ‘there are various sensitivities about it, you know’. I certainly did by now. What is still being withheld over 70 years later? And why are people so jittery when asked straightforward questions about the cage that are not intended to be controversial?

It raises a final challenge here: As a historian, if you discover something that could still be classified, how do you know if it is ok to publish? The source could be an eyewitness testimony, for example. (Hence the importance of former intelligence staff having signed the Official Secrets Act). For me in a case like that, I try to use that oral tradition to find the documentary evidence to substantiate the story. Writing the history of secret intelligence is not only about the material and corroborating a story. It is curious, and sometimes disturbing, to find myself asking moral questions about whether it is right to reveal sensitive or sensational information. What purpose would be served by publishing it, and could it compromise current national security?

It is something I was not expecting when I embarked on my career as a historian. But, the fact that some areas of our intelligence history remains classified is, perhaps, what makes it such a compelling and challenging subject to write about. 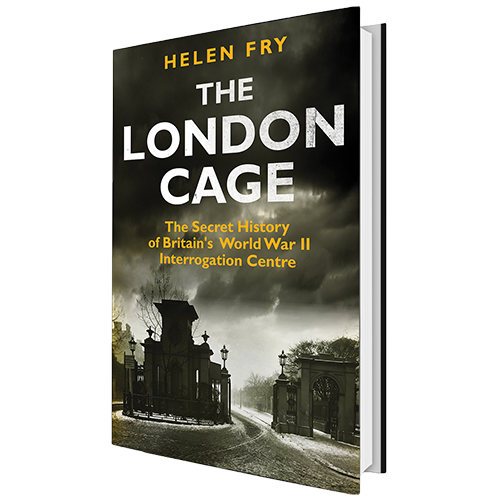 Historian and biographer Helen Fry is the author of more than twenty books focusing mainly on intelligence, prisoners of war, and the social history of World War II. She lives in London. The London Cage is available to purchase here.

‘There was something of the fairground sideshow about this supposedly educational experience.’ Throughout this month, Lee Jackson reveals…