The existence of for-profit cadaver purveyors is no secret.  Yet, it remains a largely invisible issue. Naomi Pfeffer’s thought-provoking work documents the history, politics, and ethics of the cadaver part trade in the United States and Britain as well as the incredible profits made from unpaid—and often unwitting—sources. Naomi Pfeffer answers the below three questions to shed light on an otherwise underground issue.

1. What has gone on in mortuaries?

Little is known about what has happened in mortuaries. Yet between death and disposal in a grave or crematory a majority of British and American corpses spend some time in a mortuary. Modern mortuaries consist of a suite of rooms: one where autopsies are performed; another equipped with ranks of refrigerated drawers in which corpses are held in order to slow the pace of putrefaction.

Until fairly recently, mortuary staff were untrained, paid wages significantly below the national average, and reliant on tips to raise their standard of life. The culture of tipping behind the closed mortuary doors created the conditions for the institution of what might be called collecting sites. That is, places where with and without the knowledge and agreement of people during their life or after death, stuff can be extracted out of corpses for repurposing in medical procedures.

The culture of tipping no longer flourishes in mortuaries. But financial incentives have multiplied as the cadaver ‘products’ industry has grown, and are found at every link of a complex global supply chain connecting corpses and patients.

2. How are cadaver ‘products’ used?

Almost everyone has heard of organ transplantation, where each year, on several thousand occasions, diseased kidneys, hearts, lungs, livers and pancreases are replaced with relatively healthy ones explanted out of fresh corpses. However, few people are aware that stuff extracted out of cadavers – – corneas, skin, bone, veins, arteries, cartilage, dura mater – supports millions of medical procedures, many of which address problems associated with aging. A survey carried out by the American Association of Tissue Banks provides some indication of how often cadaver stuff is repurposed; in 2007, 48 members had distributed 2,110,200 items. The findings are an underestimate; for instance, the 50,000 or so American corneas grafted that year are excluded; they are also out-dated: sales are growing rapidly.

New cadaver products are regularly introduced. Ingenuity is focused on making procedures that originally demanded technical skill easier and quicker to perform. The strategy is comparable to that of convenience food manufacturers that have transformed complex dishes that only a master chef is competent to prepare into products sold in a supermarket. For instance, cadaver skin which was extracted and used in specialist burn units as a fresh biological dressing of drastic burns, is freeze dried and either cut into different sizes and packed like American cheese and sold as easy-to-apply dressings of chronic ulcers, or liquidised and decanted into hypodermic syringes so that it can be injected in a beauty salon to smooth facial wrinkles.

3. Where are cadaver ‘products’ manufactured, and by whom?

American conglomerates dominate a global market, which they fuel and feed. Some are nonprofit; some have shares quoted on stock exchanges. The latter originated in the so-called biotech revolutionary that began in the 1970s when investors began offering seed money to start-ups. Both are beneficiaries of the legal framework facilitating cadaver organ explantation.

British productivity is modest, partly because the global market denies admission to anything extracted out of a British body or corpse for fear of transmission of variant Creutzfeldt-Jakob (the human form of ‘mad cow’) disease, but also because the National Health Service has given cadaver products a low priority despite growing demand. 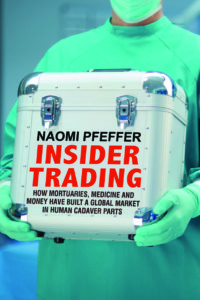 Formerly Professor of Applied Social Science at London Metropolitan University, Dr. Naomi Pfeffer writes about history, social policy, and medical ethics. She has a longstanding interest in women’s experience of infertility and the politics of reproductive medicine, and has written extensively on the subject. Her publications include The Stork and the Syringe: Political History of Reproductive Medicine (Polity, 1993) and The Experience of Infertility (co-authored with Anne Woollett, Virago, 1983), among many other pieces for the scholarly community and mainstream media.

In the Olden Time: Victorians and the British Past