Described by The Times as ‘the biographical equivalent of a buddy film’, Margaret Willes’ The Curious World of Samuel Pepys & John Evelyn explores the lives of Pepys & Evelyn, their closest acquaintances, and their influences in Restoration London. Brush up on your understanding of two of the most famous diarists and their inner circle below…

If you’d prefer a more visual and interactive experience, please click the graphic below… 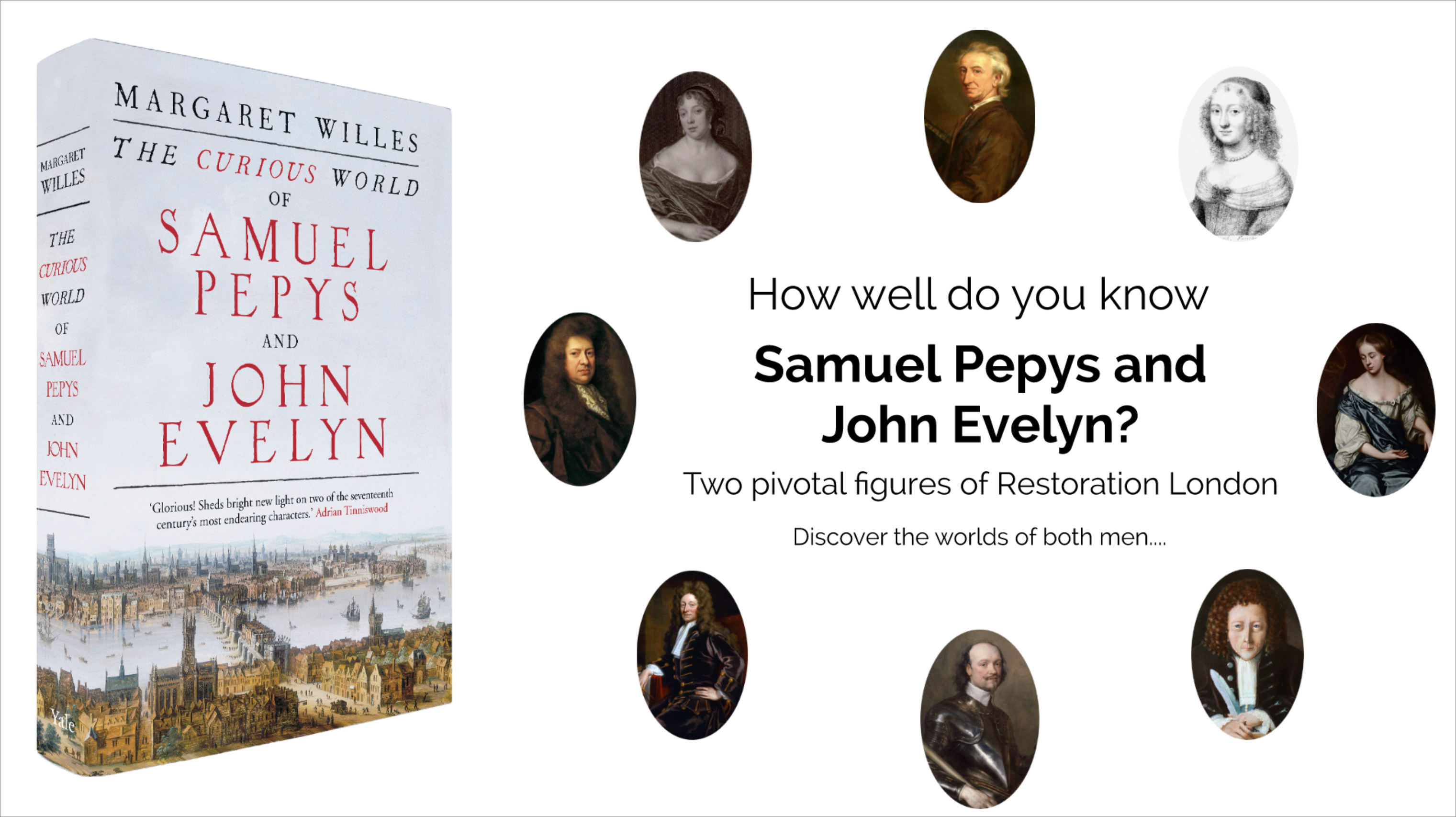 Samuel Pepys was born in Salisbury Court, off Fleet Street in London. He was awarded a scholarship to Magdalene College, Cambridge, in 1650, and on his return to London became clerk to his cousin, Sir Edward Montague. In 1655 he married Elizabeth St. Michel.

Pepys’ diary began in 1660 and he recorded in it daily for a decade. In these 10 years, he would tell of the Restoration of Charles II, the Great Plague, and the Great Fire of London. His diary ended in 1669 when he became concerned about his eyesight.

Pepys and John Evelyn were brought together by the Anglo Dutch War. They worked to relieve the plight of sick and imprisoned sailors, and this began a long friendship between the two men, through the Royal Society and beyond. Evelyn remained a loyal support during Pepys’ troubles in the political upheavals of the 1670s and 80s, and visited him in old age when he had moved out of London to rural Clapham.

Elizabeth married Samuel Pepys shortly before her 15th birthday. She was lively, well-read and musical, but could also be jealous and difficult to live with.

As Pepys’s diary makes clear, he was unfaithful to Elizabeth. His decision to take her to Paris in 1669 followed Elizabeth’s discovery of his relationship with her maid, Deb Willet. She contracted a fever in Flanders and passed away, aged 29. Pepys, profoundly upset by her death, commissioned a bust of her, which stands high in the church of St. Olave, Hart Street. He is placed next to her in death.

Although John Evelyn was born on the country estate of Wotton in Surrey, he spent much of his childhood in Lewes in Sussex. His family had gained their wealth from gunpowder production. He was educated at Balliol College, Oxford, and at the Middle Temple in London before going abroad in 1642 to escape from the Civil War.

An early part of Evelyn’s diary, which spans a much wider period than Pepys’s, is a description of his travel in the Low Countries, France and Italy, where he was able to observe some of the great European gardens. In Paris, he met Mary Browne, and married her in 1647.

Moving back to England, John and Mary took over the Browne estate at Sayes Court in Deptford, and here he created his famous garden. Like Pepys he became a Fellow of the Royal Society, and was also a dedicated bibliophile. During his life he wrote many books on subjects as diverse as etching and the threat of pollution in cities. He passed away in Mayfair in London in 1706.

Mary was only 12 years old when she became engaged to John Evelyn (he was 27 at the time). Mary was a wise and intelligent woman, educated in the humanist tradition, studying drawing and mathematics.

Whilst John did encourage Mary in her studies, including hiring her a drawing master for her flower paintings, before their marriage he also drew up the Instructions Oeconomique for his young bride. He stressed in this the importance of being young enough to be formed by her husband and accept his authority, echoing the First Epistle of Peter: ‘Woman converts to man, not man to her…’

Born Margaret Blagge in London, she became a maid of honour to the King’s sister-in-law, Anne Hyde, Duchess of York. She first approached John Evelyn to ask for his help with her precarious finances, and this developed into what was known as a ‘seraphic friendship’, with the couple meeting regularly for prayers and charitable works.

Margaret met politician Sidney Godolphin, and they secretly married in 1675, deeply hurting John Evelyn who found out a year later. Margaret died in childbirth in 1678. Evelyn was devastated and assuaged his grief by writing a life of Margaret as a memorial, and taking a interest in the welfare of her son Francis.

Hooke showed an early mechanical aptitude which served him well when he arrived in Oxford in 1653 and became assistant to the scientist Robert Boyle in his famous experiments on the air pump. Returning to London at the Restoration, in 1662 he was appointed Curator of Experiments at the newly established Royal Society. The following year he moved into Gresham College and began to lecture on the history of nature and art.

In 1666 Hooke was appointed Surveyor in a team headed by Christopher Wren with the responsibility to rebuild the city after the Great Fire. Hooke not only had to deal with property disputes, but also helped to design the parish churches and civil buildings. He gained a reputation as a difficult person, and was embroiled in a long standing dispute with Isaac Newton about intellectual property.

In 1665 Hooke published Micrographia with the endorsement of the Royal Society. The book provided descriptions of tiny creatures such as the gnat and the flea, along with the structure of the snowflake. The publication caused great excitement, with Pepys recording how he bought a copy and sat up all night reading it.

Wren studied at Wadham College, Oxford. In his diary, John Evelyn recorded the multi-storeyed transparent beehives that Wren built so that bees could be observed without harm; perhaps an early sign of a future architect. Wren originally came to prominence as a mathematician, taking the chair in astronomy at Gresham College in London in 1657.

Wren was working on the repair of the battered Gothic cathedral of St. Paul’s when the Great Fire broke out in 1666. Along with Robert Hooke and a group of craftsmen, he not only rebuilt St Paul’s, but also designed 51 churches, creating the new skyline of London. Wren was knighted in 1673, and passed away at the age of 91 on his way to visit the new St Paul’s, which he referred to as his greatest work. He was buried in the crypt, and an inscription in the centre of the nave below the dome runs, ‘Reader, if you seek his monument – look around you’.

When Kenelm Digby was just three, his father was executed for his part in the Gunpowder Plot. Despite the requirement to be brought up in the Protestant faith, he remained a Catholic, attending Gloucester Hall in Oxford where his tutor was a humanist with Catholic sympathies. In 1625 he secretly married his childhood sweetheart, the great beauty Venetia Stanley.

Digby settled in Charterhouse Square with his wife and children. Interested in recipes, he concocted ‘viper wine’ to preserve Venetia’s beauty, and was devastated by her sudden death in 1663, which some attributed to the wine. Digby took up residence in Gresham College, immersing himself in scientific experiments, and becoming an early member of the Royal Society. After his death in 1665, his recipes were published in a cookery book, including memorable advice on making the newly fashionable drink of tea – water should not remain on the leaves any longer than ‘you can say the Miserere Pslam very leisurely.’ 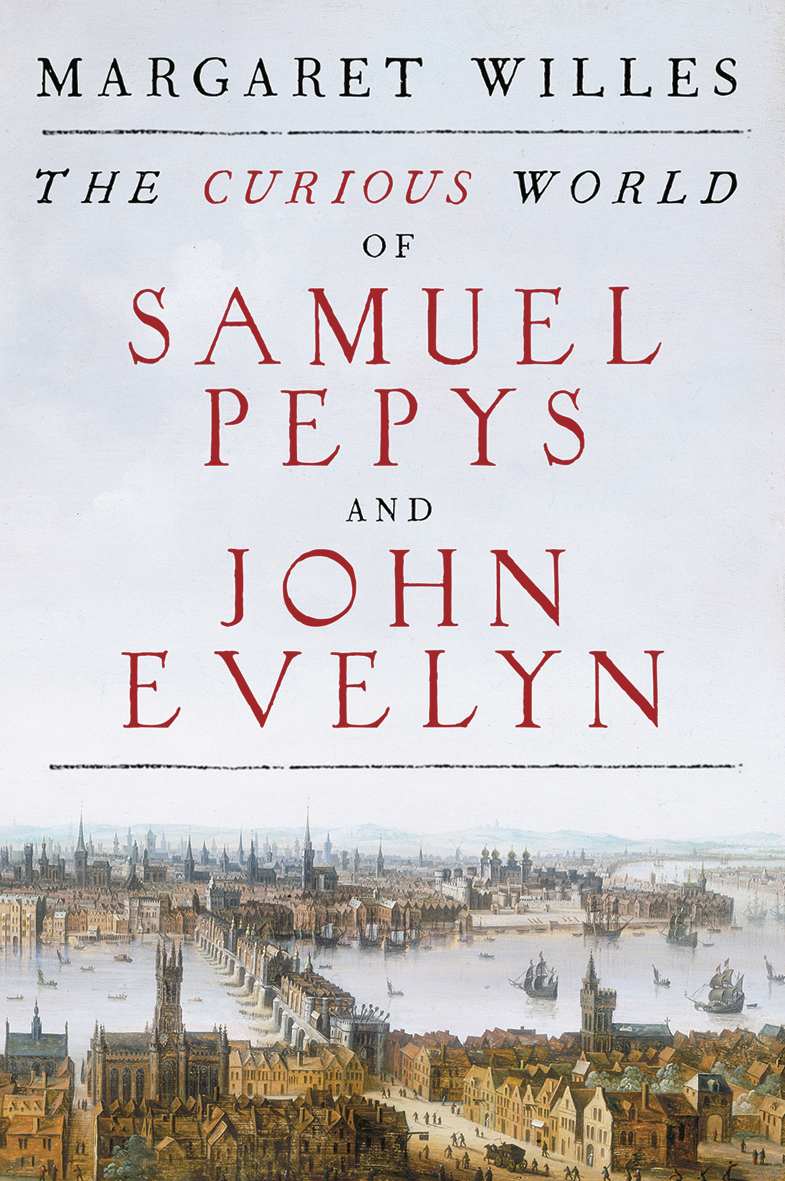 Margaret Willes, formerly publisher at the National Trust, is author of several books, including Reading Matters and The Gardens of the British Working Class. She lives in London.

The Curious World of Samuel Pepys & John Evelyn is available to buy here.