From Belgrade to Ankara and from Athens to Bucharest, Russia seems to be on the mind of everyone in Southeast Europe in recent years.  Whether it is Moscow’s involvement in the domestic politics of this or that Balkan country, or the latest grand scheme for a gas pipeline crossing the region, there is never a shortage of interest.

The fear of Russian encroachment has helped win the attention of powerful outsiders.  In a speech this month delivered in Montenegro, the latest state to join NATO, U.S. Vice President Mike Pence stated: “Russia continues to seek to redraw international borders by force. And here, in the Western Balkans, Russia has worked to destabilise the region, undermine your democracies, and divide you from each other and from the rest of Europe.”  And this view is by and large shared by the EU. Dignitaries including German Chancellor Angela Merkel and EU foreign policy chief Federica Mogherini (by no means a Russian hawk) have had plenty of criticism when it comes to Russia’s links to majority Christian Orthodox South Slavic countries such as Serbia.  And further southeast, Turkish President Recep Tayyip Erdogan appears more comfortable in the company of Vladimir Putin, casting aside the rivalry over Syria that caused an acute crisis in Russian-Turkish relations in late 2015 and the first half of 2016.  Today’s Russia is deeply ensconced in this part of Europe, as was the Soviet Union all the way until its demise in 1991, or indeed the Tsarist Empire at the peak of its power and influence in the 19th century.

Yet, the empires of old are not coming back from the dead anytime soon. Rival Power highlights that today’s Russia, at loggerheads with the West over the wars in Ukraine and Syria, is both unable and unwilling to bring Southeast Europe into the privileged sphere of influence it has been claiming for itself.  Russia is acting opportunistically, exploiting the weak points in the strategy pursued by the EU and NATO.  Its aim has never been to establish hegemony over a region which is integrated or gravitates, in economic and political terms, to the West.  Rather, it is about muddying the waters and causing headache in Brussels, Berlin and Washington.   Which is not that difficult given the propitious conditions across the region:  weak and dysfunctional democratic regimes bedevilled by high-level corruption and the absence of the rule of law, legacies of conflict and war, and the positive image of Russia which is often in conjunction with the resentment against the EU and America.  The Balkans and Turkey are a fertile ground for Russian overtures.

Rival Power, which tracks Russia’s presence from the collapse of Yugoslavia till the present, differs from other accounts in two fundamental ways.  First, it shows that local players have made good use of their links to Moscow.  National elites, political parties, government officials, and business people have been playing the Russian card to their advantage as much as the Kremlin has leveraged its connections and assets.  The much talked about Russian influence is a two-way street.  Second, Rival Power debunks clichés regarding the deep-running historical and cultural links between the Russian Federation and Southeast Europe.  While they are clearly there, the past is more complex than the one-dimensional version served in op-eds (or blogposts, like the one you are reading).  Oftentimes, history provides the raw material to forge narratives about the present, devoid of nuance.  To understand Russian policy in the Balkans, you need to learn about Gazprom or Lukoil first, and only then about the legacy of Byzantium or Nicholas II.

Does Russia pose a threat to the Western order in the region?  Perhaps so, though many of the ills Europe and America have been struggling to fix stem from indigenous roots and cannot be blamed on Putin’s machinations.  And, in all honesty, Russia’s disruptive power has its limits.  Montenegro’s accession to NATO, months after authorities blew the whistle about an alleged plot for a coup d’etat hatched in Moscow, is a done deal.  Contrary to the hype, Russian gas is not the formidable political weapon it was in the mid-2000s, now that the EU’s regulatory clout is stronger than ever and market conditions have shifted in favour of consumers.  The marriage of convenience between Russia and Turkey will never blossom into a true alliance.  Russian “soft power”, its appeal to societies in Bulgaria or Serbia does not imply a turn away from (Western) Europe. Yes, Russia is back and it does not shy away from throwing its weight around.  But many times the chasm between rhetoric and real impact is large. 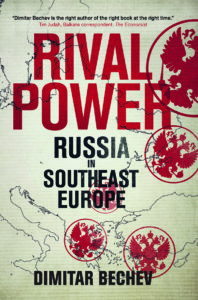 Dimitar Bechev is a research fellow at the Centre for Slavic, Eurasian, and East European Studies at the University of North Carolina at Chapel Hill and a nonresident senior fellow at the Atlantic Council.

The World the American Revolution Made